10 Walks to Take When you Study Abroad in Barcelona

One of the best ways to explore a new city is on foot. Today, we take a journey through Barcelona, one of CAPA's Global Cities, to check out some of the routes to take when you study abroad.

Walking can be one of the best ways to discover a new city, understand its layout and observe the everyday life of locals. Download some offline maps or apps to guide you, pull on a pair of sneakers and head out the door for some fresh air and exercise. Here are 10 of our favorite routes to explore when you study abroad in Barcelona.

Instagram has unleashed the once-secret stunning views from the top of Turó de la Rovira where the Bunkers Del Carmel are located, and they’re well worth the walk. These are abandoned Spanish Civil War bunkers and a wander up there will give you one of the best panoramic views over Barcelona. If you want to make the most of a good walk, head there by foot from the city center. For the “lazy” route, take the metro and hop out at Guinardó i Hospital de Sant Pau or El Coll/La Teixonera. Then you’ll have plenty of energy to tackle the steep hill to the top. 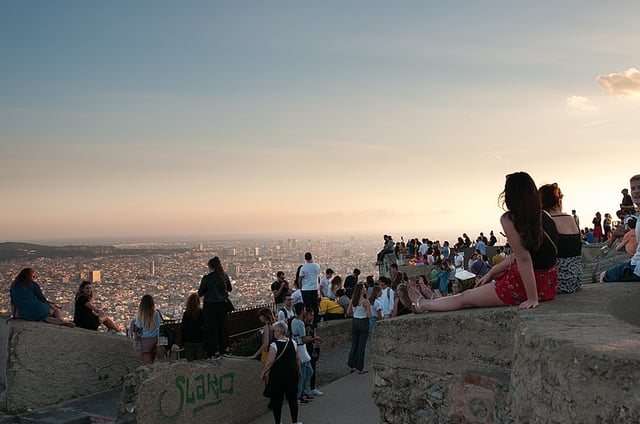 Head 25 miles northwest of Barcelona for a real treat if you enjoy hiking more than urban walks. There, you’ll find Montseny Natural Park, which makes a great day trip and has three main hiking trails that pass through the mountain range as well as some that are shorter, more relaxing, and less intense. There’s a mountain lake, fresh air, waterfalls, forests, and plenty of beautiful nature to take in. If you decide to hike all the way to the top, bring a jacket; the altitude lowers the temperature quite a bit. Fun fact: There are so many natural springs that about half of Spain’s bottled water comes from here! 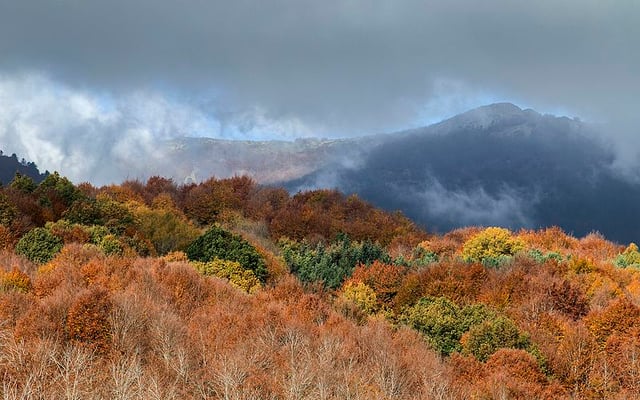 Barcelona is surrounded by nine hills. To the west of the city, you’ll see one with a church on top that is lit up at night. That’s Tibidabo. It’s the hill with the famous Parc del Tibidabo that has the colorful vintage Ferris wheel—one of Europe’s oldest amusement parks, in action since 1905. Head out for a walk to the top through the high end Sarrià neighborhood. Stroll along Avenida de Vallvidrera and the Carrer de Santpedor and you’ll find the start of the route to the top of Tibidabo from there. After a rereshing hike through wooded areas, you’ll be rewarded with amazing views of the city. 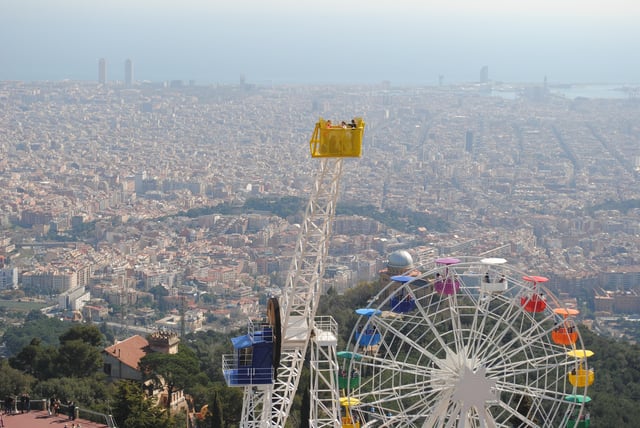 The view from Tibidabo Mountain.

If you’re not really a hiker and an easier urban adventure is more appealing, walk just under a mile straight down one side of this famous street from the Plaça de Catalunya to the neighborhood of Gràcia (also worth exploring if you feel like continuing on). Then walk back down the other side for views from both directions. Look up, because this is where you’ll see some of Barcelona’s amazing architecture like Gaudí’s Casa Batlló and La Pedrera. Beware that there are lots of shopping opportunities along this walk, so don’t get too distracted! Ahem. 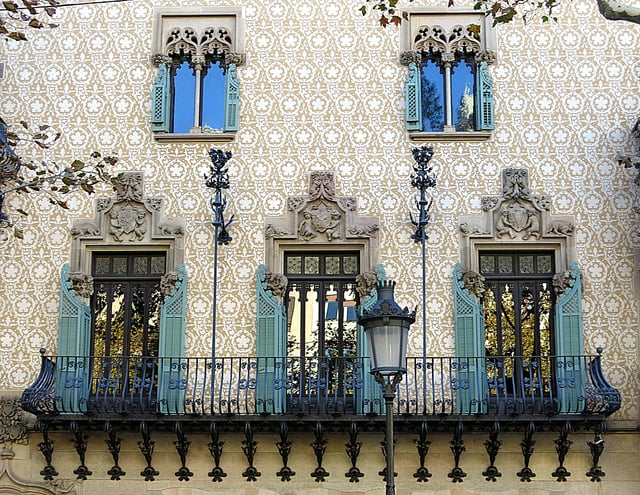 This one is for a day trip and not for a casual stroll. There are five main hiking trails that vary in difficulty and length. Montserrat literally means “serrated mountain” which is a pretty accurate description of one of Spain’s most impressive land formations with its limestone columns. Montserrat Abbey also makes it an important religious or spiritual destination for a lot of people. Hike for panoramic views across Catalunya toward the Pyrenees, over 1,250 species of plants, wild goats, all sorts of birds, geckos, and a stunning oak tree forest. 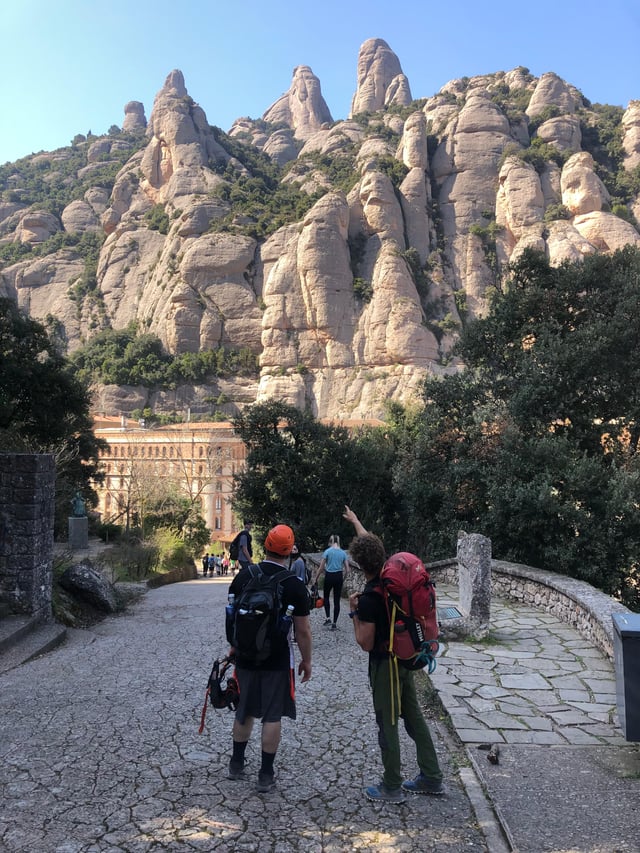 Another vertical climb! If you tackled Montserrat, then the iconic Montjuïc will be a breeze. It’s the smallest of the hills around Barcelona. There’s a lot to see here, from the Olympic Stadium to the Joan Miró Foundation to various gardens to the Montjuïc Castle which has been around since the Early Middle Ages. You’ll spend about three hours winding your way up to the castle from the Jardines del Teatre Grec in Poble Sec (the most scenic route) up the Laribel Stairs to the Joan Miró Foundation then the Carrer Doctor i Font Quer. Take in the views, have a snack and wind your way down again. You can spend much more time exploring the gardens or walking different routes if you wish. 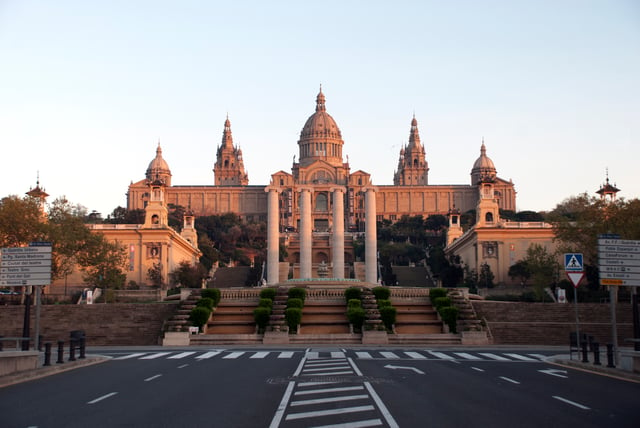 One of Barcelona’s most trendy and creative neighborhoods, the post-industrial area of Poblenou is full of history. Create your own route here, led by the sites that pull you in one direction or another depending on your interests. There are gallery windows to walk past and old textile warehouses to see (like Can Ricart near Centre de Poblenou Park - a good place to begin). Head to Plaza de las Glories to see the Design Museum and then toward the sea. Take a walk down Rambla del Poblenou for the social activity and shops. Wander over to Plaza Prim which was the oldest part of the neighborhood to end your walk here or keep exploring the smaller streets around you. 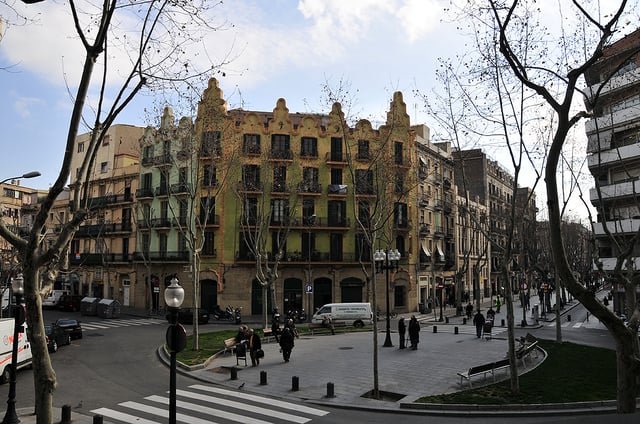 The corner of Rambla del Poblenou.

Here’s another good one for anyone not so interested in hiking all of those big hills (although you do need to walk up one hill to get to the beginning, sorry!). The “Road of the Waters” is one of the most popular trails in the city and runs along Tibidabo Mountain (in a mostly flat way). The name comes from the water pipes that used to run along it, so don’t expect a river. You can follow the trail through nature for about 5.5 miles and find some beautiful views over Barcelona and the Mediterranean. It’s a great place to ride a bike too, by the way. And if you’re looking for a good challenge, check out 360 Running Barcelona for running tours! Note that there’s very little shade, so prepare accordingly. 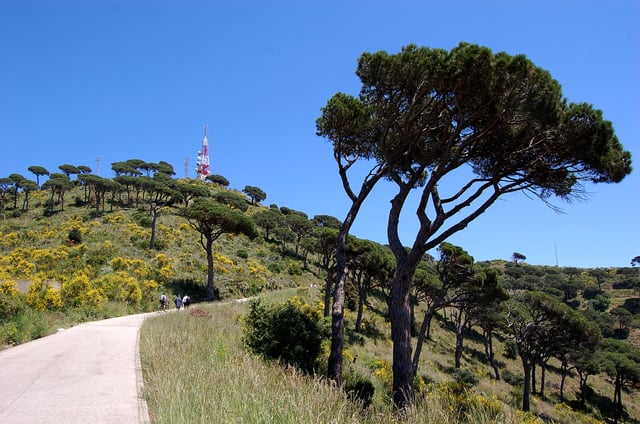 The Carretera de les Aigües mentioned above is part of the Collserola Park, but this is a huge place and there are many other trails that are fantastic for a walk. It’s the largest metropolitan park in the world at 8,000 hectares and there are footpaths everywhere, along with 10 million trees, 1,000 plant species, and many types of wildlife including wild boars and a cat-like animal called a genet. There’s so much space to explore that you could take a different route each time you go. You’ll find ruins, a lot of history and some stunning scenery. You may also come across chapels, shrines, farms and farmhouses and even restaurants, but bring snacks and water just in case.

CAPA students on a hike in Collserola park

Enough of the hills? Try a walk that goes from the Colserolla Mountains out to the sea, along the river bank. The River Besòs is a small one at only 11 miles in total and there are trails for walkers and cyclists that run along the riverside. Efforts have been made to clean the river which was once very polluted and, in 2004, a park with wetlands (an area of conservation and unfortunately not open to the public). The park includes a large public area though, which was opened in order to encourage people to return to the area. Some pretty views along the way to the sea. 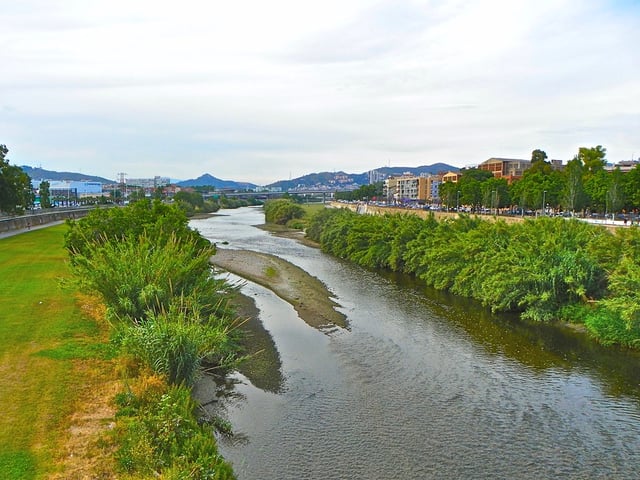