Blogs are important resources for students on CAPA's study abroad programs (and we love to read them as well), so we're kicking off our annual Top Blog Awards this year!

Blogs listed alphabetically, these are the reasons they each deserve one of CAPA International Education's new Top Blog Awards. Stop by and follow along. 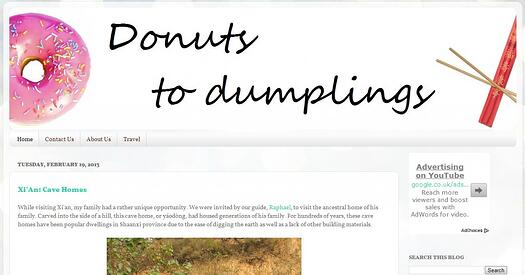 Why Donuts to Dumplings deserves a CAPA award:
Kristin and Matthew are an American couple who moved to Shanghai early last year which is one of CAPA's newest program sites. They offer a great insight into local life in China like the popular "Avocado Lady" (Jiang Qin) who has a shop full of delicious vegetables, fruits and lots of imported goodies (like Philadelphia cream cheese) that attract Westerners as well. Kristin and Matthew also write about great topics for CAPA students abroad like the most essential iPhone apps for Shanghai, how to make friends once you get there and what it's like to work out at a Chinese gym. The have even discovered a Penn State bar and have plenty of restaurant recommendations to share. 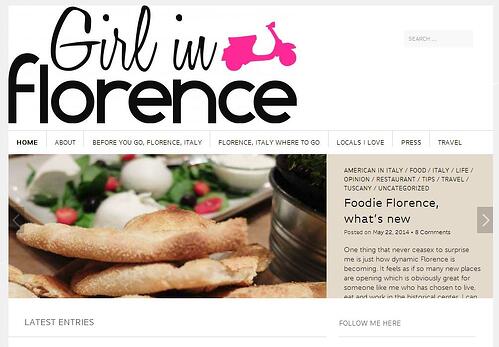 Why Girl in Florence deserves a CAPA award:
An American originally from Texas but living and working in Florence since 2007, Georgette is full of good advice on where to find the best food and hidden gems in her adopted city. We love that she first explored the city as a study abroad student. She's constantly posting about upcoming events in this global city, which is one of CAPA's longest standing program sites. She'll tell you everything from where to find the best soy chai latte in Florence to 10 important tips for staying safe in the city to a lovely list of "nerd havens" where you can escape and study or just relax. She may take you for a food tour or into the Vasari Corridor, secret passageway of the Medicis. Georgette even interviews some locals in English so you can really dig into the heart of the city and its people. 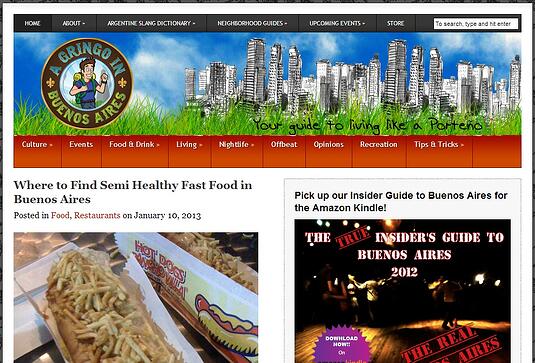 Why Gringo in Buenos Aires deserves a CAPA award:
One of CAPA's newest program sites is in Buenos Aires. Tim's blog is "guide to living like a Porteño" and stuffed full of money tips like how not to get robbed and how to get the best exchange rate in Argentina. Looking for something? Tim has advice on where the specialty shopping streets are located and another comprehensive list of places to shop. You'll also find an essential list of "Argentinean slang phrases", a popular guide to Polermo, Soho and lots of restaurant recommendations. The Gringo in Buenos Aires blog has been around for more than two years now so plenty of archives to explore!

In Search of a Life Less Ordinary
http://www.insearchofalifelessordinary.com 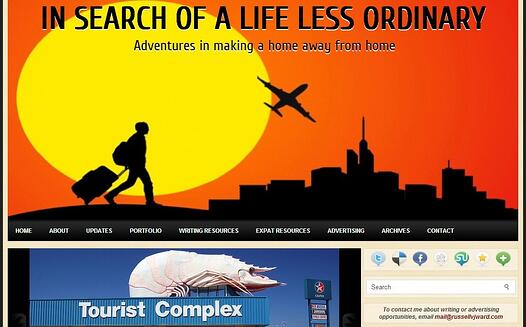 Why In Search of a Life Less Ordinary deserves a CAPA award:
Russell is a British expat who left the UK in 2003. He eventually found himself setting up a life in Sydney where he lives now after some time in Canada. He shares some great insight for students on CAPA Sydney programs looking to ease their transition into Australian life. For example, there's a post on Aussie language (ie "Bog in and have some tucker!" - say what? Exactly.) and some useful top tips for living abroad. The best part is that Russell's blog is a collection of stories. He lets us into his life and becomes a character so we get a real glimpse into life in Sydney.

It’s There for a Reason
http://itsthereforareason.com/ 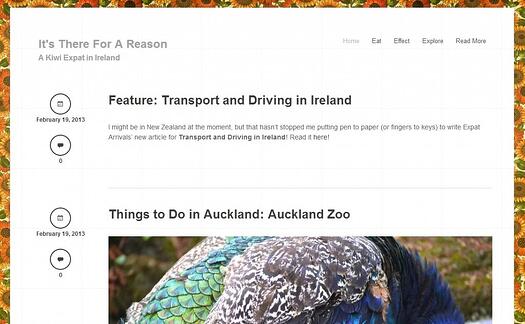 Why In Search of a Life Less Ordinary deserves a CAPA award:
Based in Dublin, CAPA's brand new program site launched in February 2013, Rachel is originally from New Zealand. As an anthropology graduate, she's really tuned into the way people behave and her insight into the local culture shines throughout her blog. While Rachel is primarily based in Dublin, she travels a lot so she has some good advice for those weekend trips while you're studying abroad like how to choose a hostel that won't give you bed bugs. She has recently started posting some vlog entries as well so you can actually watch Rachel and her Dublin adventures in action. Here's one of her and her friend on a trip to Killarney. It's also a great place for a dose of Ireland's outdoor beauty.

Why Postcards from Istanbul deserves a CAPA award:
About three years ago, Adrian bought a one way ticket to Istanbul. Last year, CAPA opened a new program site in this exciting global city. Adrian seems to have a lot of great food-related experiences that she shares regularly on her blog including a trip through the culinary backstreets of the city with the Istanbul Eats tour, breakfast at Cafe Kale (which she says is a meal that can not be missed in Istanbul) and breakfast again at Anne's Cafe (her favorite in Cihangir). There's some great posts here on how to spot an American tourist in Istanbul,10 essential Istanbul experiences, finding Ottoman treasures in the flea markets, the perfect Turkish bath experience and many more posts to explore. 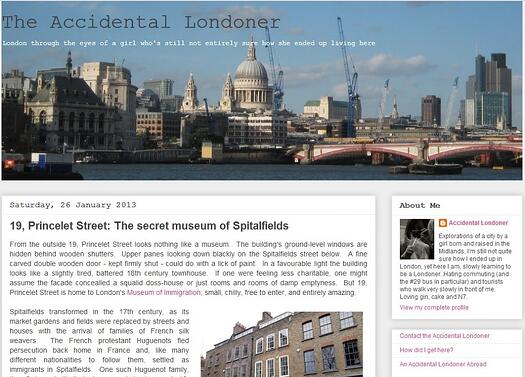 Why The Accidental Londoner deserves a CAPA award:
As her blog title suggests, Flora, from the Midlands, ended up in London "accidentally". And then she stayed. We love the raw honesty about the ups and downs of London life that come through in her story-telling style posts. But it's not just a diary of her life. Flora discovers a lot of London's hidden gems like the truly incognito Museum of Immigration that lives in a run down building on the East End's Princelet Street. She explores some important history like that of the tailors who have inhabited Savile Row for 100 years. Food is also a big topic for Flora who has covered allotment gardening in London, farmer's markets and cafes and restaurants around the city like Chicken Shop, Franco Manca and Muso.

Why The Middle Kingdom deserves a CAPA award:
Matt and Kara are an American couple originally from Minnesota who have been living as expats in Beijing since 2008. Some of their stand out posts include: 20 ways to have fun in Beijing (always important), a useful write up on the cost of living in Beijing for 2013, their favorite restaurants in this bustling global city (including Homeplate BBQ for those American expats looking for a taste of home) and an insightful overview of specialty markets. They also feature guest posts on various topics like riding bicycles in a city where they are found in abundance and an insight into hutong living. 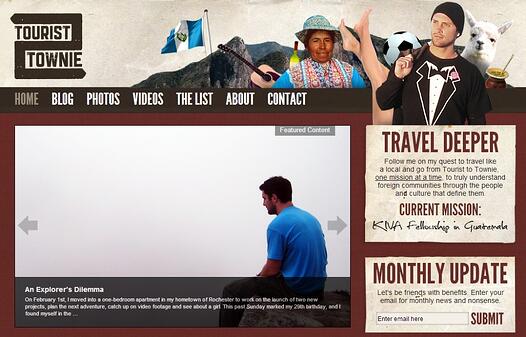 Why Tourist 2 Townie deserves a CAPA award:
Gareth is a CAPA International Education alum who studied in London via SUNY Fredonia in 2004. After a six year stint at a successful textbook company, he decided quite spontaneously to dive blindly into South America which he has been exploring for about four years now. Deep travel has become a way of life, learning how the locals live, or as his title says, becoming a "townie", not just a "tourist". And he's built up an impressive archive of stories and videos on his way. We love his mission to travel deeper as a Kiva fellow in Guatemala, a day of life in Medellin, Colombia, Gareth's list of 15 inspirational people and there's a whole category for hidden gems! If you study abroad on CAPA's Buenos Aires program, you'll be particularly interested in the Gareth's experience in Argentina.

Would You Go Again?
http://jlpetro14.wix.com/would-you-go-again

Why Would You Go Again deserves a CAPA award:
Jessica is a CAPA International Education alumna who studied abroad on the London Summer 2012 program. We love Jessica's photo-filled explorations of some of London's finest areas like Notting Hill and Greenwich Village. Some of her travel experiences outside of London are covered and she recently invited a friend who studied in Poland to write a guest post. She also writes on useful topics, giving us her top tips for currency exchange and the pros and cons of London's Tube versus the bus. Jessica has a real appreciation for the value of her study abroad program, writing a detailed post about cultural immersion and a competitive advantage that will open up a lot of doors after graduation.

Congratulations to all of the CAPA Top Blog Award 2013 winners.
Keep up the great work!