In this week's column, Colin looks at the role of soccer, or "football" in CAPA's cities around the world.

We have to start by recognizing that in many parts of the world we use the term "football", but to avoid confusion with American Football, Rugby Football, Aussie Rules Football, and anything else, "soccer" is the universal term - I'll slip back into using football from time to time. I recall on my first visit to mainland China in 2003, I met a local university administrator who said "I hope we can become friends and we can exchange ideas about English football." (We still are friends today). The game cuts across all nationalities and genders and is a great way to start up a conversation in a sports bar while watching a live TV game. 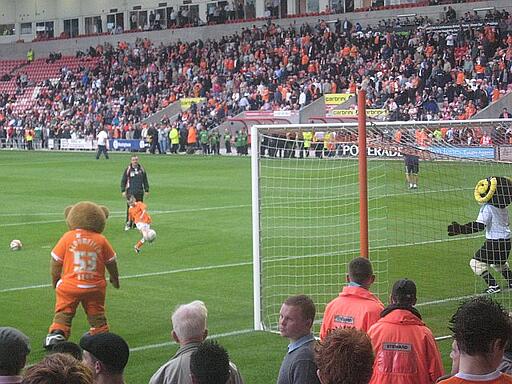 Photo: Fun at Blackpool Football Club before kick off by Colin Speakman

Typically supporters are fiercely loyal to their first team and still try to follow it from wherever in the world they end up. My own example, growing up in Blackpool (the Seasiders, the Tangerines) but moving to London for university, led to no danger of switching allegiance. A few seasons ago, as a modestly resourced club, Blackpool reached the top English league, the Premiership, and after a gallant fight, narrowly went down on a points total that kept teams up the next season. Blackpool's efforts made them many people's second team around the world with supporters in USA, including another good friend whom I usually communicate with about Chelsea FC. I could watch Blackpool live on TV in Shanghai in Big Bamboo sports bar at a weekend in that Prem season (many great conversations started!). 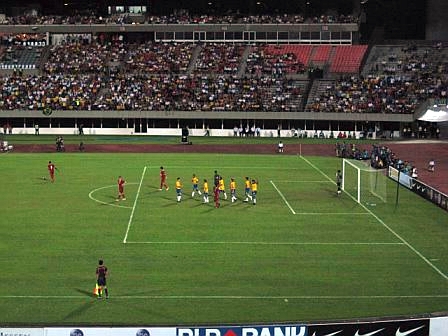 In 2008, I was on vacation in Singapore and in the warm up for the Olympics later that year in Beijing, Brazil's soccer team was playing a friendly versus the Singapore national team. I recall sitting in front of me a female fan decked out in AC Milan shirt - point made I think (Brazil won quite heavily by the way!).

It is of course a huge debate as to who is the top club and whether it depends on historic record or current form. "Footballing might" can also be measured by the strength of the "brand", what some owners call the "franchise" (true supporters generally dislike both terms) and many top clubs have become global entities - A recent survey projected that Manchester United alone could have 659 million supporters worldwide.

Beijing's Olympic Stadium (the Bird's Nest) has staged some memorable soccer matches - including the Italian Super Cup between AC Milan and Inter Milan in August 2011 (2-1 to AC) and to celebrate the kick off of the London Olympics in July 2012, Arsenal v Man City entertained in Beijing (2-0 to Man City)

The Chinese Super League (CSL) is trying to raise its profile with this month's news that David Beckham has become a global ambassador for Chinese football to help raise the image of the country's game. See you in town David... I have a Beckham shirt from my visit to a game at LA Galaxy's Staples Center Stadium.

The World Cup, next up in Brazil in 2014, usually determines country bragging rights, with Spain currently in possession. Folks generally accept that the strength in depth of England's four professional leagues (92 clubs) is the greatest in the world - Bradford from the 4th tier reached the League Cup final a few weeks ago! CAPA's Deputy President resolutely watches Tier 4 Barnet FC in their seemingly annual battle to avoid relegation - and that club is managed by a famous Dutch international, Edgar Davids. Soccer unites the world at all levels. 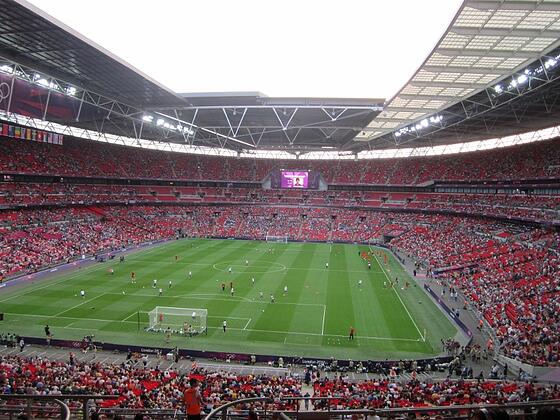 Women's soccer leagues have a good following in many countries and playing the game at grassroots level is popular with girls in schools. In the 2012 London Olympics, the final of the Women's Soccer at Wembley drew over 80,000 fans (beating Man Utd's typical 75,000 at Old Trafford for the men's team in EPL) and I was one of them to see the USA triumph 2-1 over Japan.

There's a soccer presence in all CAPA International Education Global City (GC) locations and a great opportunity to follow the game in those locations at the right time of the year. There's a spread too - for example, the Chinese Soccer League runs from March to October while the English Premiership runs from August to early May. Hence some players could play for clubs in different parts of the world in same year. In some of our GCs, the game is characterized by fierce historic rivalries between clubs and in some cases a story of the rise and fall of an icon. Let's briefly take a closer look.

There's only one team in the Chinese Super (Soccer) League (CSL), in the capital so no "in city" rivalry. Beijing Guo'an, under a foreign coach and a chunk of permitted overseas players, achieved a creditable 3rd place in 2012 and finished well above their nearest rivals geographically - that's Tianjin Teda - Tianjin a municipality 30 minutes away on a high speed train. Guo'an perform at the Beijing Workers Stadium near Sanlitun in East Beijing. Despite the mantra that Asian supporters like lucky red (and convenient that big names such as Arsenal, Liverpool, Manchester Utd all play in red), Beijing Guo'an actually play in green and their megacity rivals Shanghai Shenhua (see separate section) play in blue. A few other clubs play in orange (or is it tangerine?). It is not "red or dead" out here in reality!

I cannot think of a bigger contrast in our GCs between no local rivalry Beijing and massive historic local rivalry in BA. It is the story of Boca Juniors versus River Plate - both famous among the top teams and traditionally battling for the title each year. The clubs represent two very different aspects of BA (La Boca - working class, European roots, South East, compared with River Plate in the Belgrano barrio, a leafy upper-class neighbourhood in north BA). River Plate suffered the unthinkable - relegation from the top flight in 2010-11, but bounced back a year later, hence restoring the "superclasico" between these two BA giants.

The Irish are a proud soccer nation, and probably none more so than when they qualified the World Cup (for a second successive time) when held in the USA in 1994 under Manager big Jack Charlton - a tournament England failed to qualify for! There are five teams based in Dublin in Republic of Ireland's Premier League. St Patrick's Athletic FC, Shamrock Rovers, Bohemian FC, Shelbourne FC and UC Dublin AFC. Photo: Permanant and colorfast support for the Dublin GAA football team by Photopol

Although a Premier League, teams do not play in front of big crowds and stadium capacities range from 3,000 to 9,000. Most matches are on Friday nights with one or two on Saturday and Sunday. The 2013 season just started on 8 March. Despite having five sides from Dublin in the league, the title in 2012 was won by Sligo Rovers FC from County Sligo, with Drogheda United FC, from County Lough runners-up. Capitals don't always come out on top. Photo: A selection of soccer paraphernalia in Florence by David Morris

Italians are passionate about their soccer and indeed Italy has won the World Cup four times. However, Italian soccer has also experienced match-fixing scandals in last 10 years. Florence’s club, ACF Fiorentina (nickname “Viola” after its purple kit) has tasted success near top of Seria A but has declined in last few years. Riivalry is strong against all the top Italian teams and I remember going to a match in the Stadio Artemio Franchi (which holds a bit over 47,000) when the Viola hosted Juventus and no love was lost. Very high fences separated the fans, but that did not stop coins being thrown. Fiorentina went down 3-1. Turkey is also passionate about soccer. Istanbul can offer visitors four clubs in the Super Lig – the big three are Besiktas, Galatasaray and Fenerbahce (the latter on the Asian side of town), and all of them have been involved in all 54 seasons of the National Championship and only once has the title gone elsewhere. Istanbul BB are the city’s fourth club formed in 1990 from a merger of clubs and so far their best is runners-up in 2011 Turkish Cup Final. The capital, with an 8 million+ population, can support a large number of well-attended EPL clubs and many others throughout the four tiers of professional football. There is great rivalry between Arsenal and Tottenham in the North and to a lesser extent Chelsea and Fulham in the West. West Ham in the East hope to move into the London Olympic Stadium while Queens Park Rangers hope to survive a relegation battle. In the 2nd-tier Crystal Palace, Millwall, Charlton and Watford (just North of London) hope to join the big time. 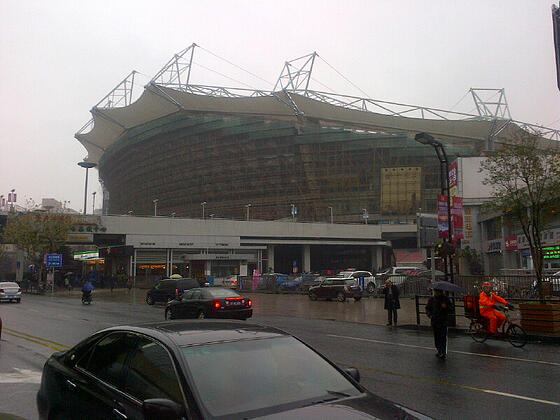 This 2013 season will see three clubs from the economic capital in the CSL for the first time. The most established and wealthiest (though that can change if new owners come to other clubs) is Shanghai Shenhua. The next is Shanghai Shenxin who got promoted into the top tier a year ago and Shanghai SIPG who came up at end of 2012 and thus will have their first season in the top flight this year. Photo: Soccer team of colleagues in Shanghai by Chengwei Tu

Shanghai Shenhua play at the famous Hongkou Stadium which is very close to the CAPA's Shanghai summer program campus and games will be on during the program. Australia has fantastic sports that the citizens are hugely successful at, including Rugby, Cricket and their own Aussie Rules football. By comparison the Australian “A league” of soccer is less famous, but developing since 2005 launch. The regular season runs from October to March which is mainly the summer in Australia. Photo: In Sydney, even the elephants get involved by Megan Spooner

Sydney FC (well-established) and (Western) Sydney Warriors (regarded as a fledgling club in its first A league season) are the local teams to watch. Sydney FC has won the Championship twice but near the end of the current season they lie 8th. On the other hand new boys Sydney Warriors are top. The ever-changing world of soccer.