Creating a CAPA International Education Documentary for The Telegraph: Part 2

So, where were we? Ah, yes, we are in one of London's famous black cabs, five of us plus lighting, cameras and other film gear whizzing across Westminster Bridge with Big Ben and Parliament at our backs. We've nearly reached our second destination where Emily, Matt and I will spend the remainder of the day filming with Tracc Films to create a short documentary for The Telegraph. 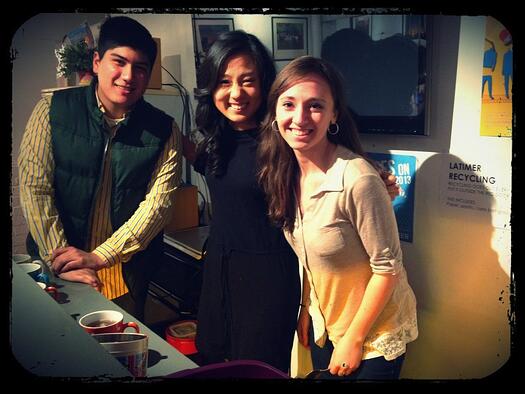 Latimer Creative Media, one of CAPA International Education's internship partners, is situated on the quirky Lower Marsh Street, just a minute walk from the Leake Street graffiti tunnel, I knit London, Radio Days vintage shop and Scootercaffe with a vespa in its front window and a friendly resident cat - the perfect neighborhood for a creative team.

CAPA currently has three interns here and they are very much a part of Latimer's team, involved in everything from film production to social media marketing. Latimer works with talented youth to produce cutting edge film and digital media. They're well connected with clients like the BBC, Sky, Channel 4, Paul Smith, London Olympics 2012 and Transport for London. They get investment for projects, run live events and give top placements in large media organisations.

Photo: CAPA Intern Kerri hard at work with the green "grass" behind her!

We were welcomed down into the eccentric basement office which has no windows, but a very fluffy green "grass-colored" rug and a full wall plastered in an image of a forest to emulate the outdoors. There was a light-up bar for entertaining clients, a collage covered fridge, a full chalkboard wall for ideas generation and large blown up photography prints on the wall.

Three employees, dressed comfortably, sat on a red sofa next to a table full of magazines, working on laptops. We drank tea from colorful spotted mugs and went about arranging the backdrop and lighting for our first interview. 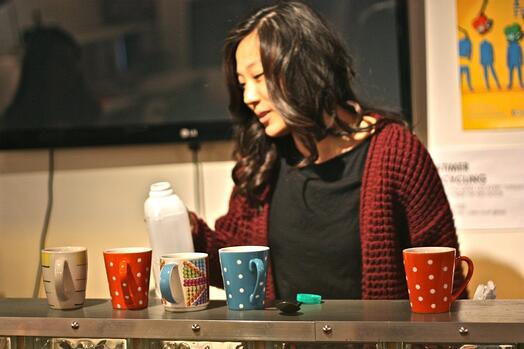 Photo: Kerri kindly playing host for us, though she does plenty more than make tea during her internship!! They keep her busy with lots of projects.

The Tracc team set up the scene for the first interview which involved some minor rearranging of Latimer's decor... 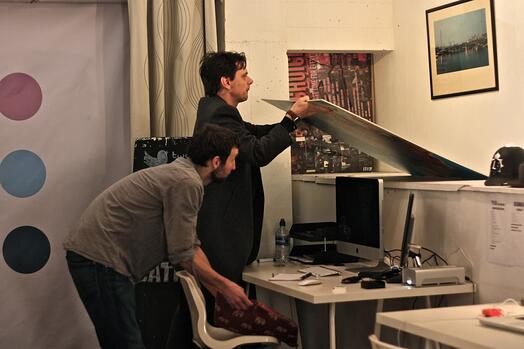 ...and the thoughtful framing of the first shot!

While everything was being set up, Business Development Manager Jacques de Haes and CAPA student Nicole had a chat.

Kicking off the interviews was CAPA student Mike Guitierrez from Auburn University. Mike has a background in film and is very much enjoying the opportunities his internship is giving him to work directly on projects and pick up some new skills. He'll be putting together his own short video for the CAPA World blog so keep an eye open for that! 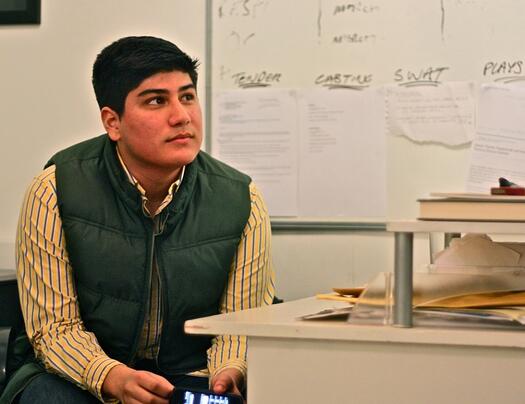 After Mike, it was Kerri Williams' turn. Kerri is a strategic communications journalism major from the Missouri School of Journalism and is very interested in the differences between the business environment of the United States versus her experience in London. She'll be writing about this topic for CAPA World blog soon! 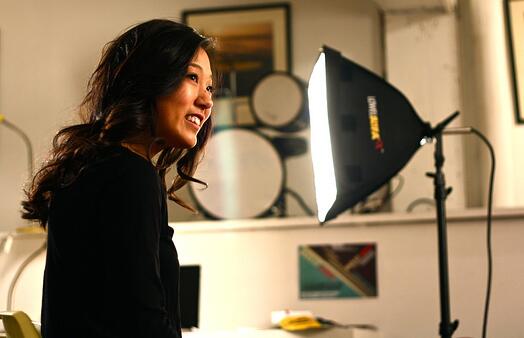 Photo: CAPA intern Kerri getting ready for her interview

While Kerri and Mike were being interviewed, Nicole busied herself with some tasks for Latimer.

Photo: Nicole working on a project

To accommodate his other commitments, we skipped over to Jacques for our next interview.

Photo: Latimer's Jacques setting up the shot for his interview

Though he is already tall, to level him with the background at the appropriate height, he sat on a stack of pillows from the sofa (which you won't see on camera) and gave an excellent explanation of how CAPA interns are integrated into every aspect of Latimer's daily business activities. 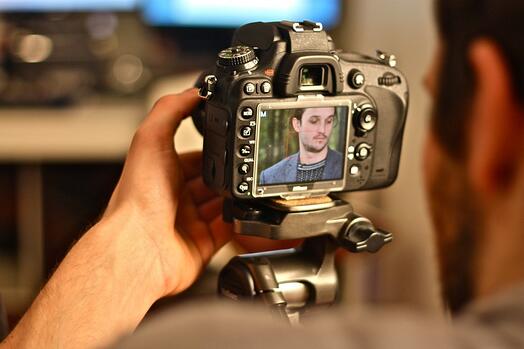 In the meantime, Mike had some projects to work on. 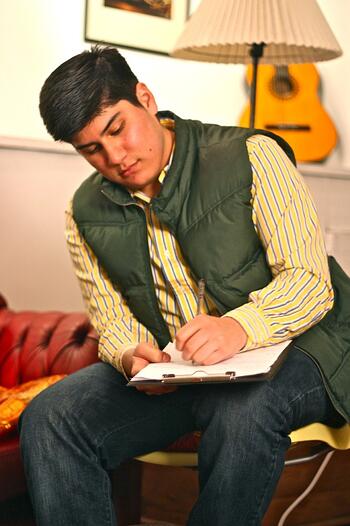 As the London light began to fade, we grabbed our coats and headed out into the chilly evening air and set up the camera. Like Abilio from Bean Partners did earlier that day, the CAPA interns from Latimer stood still for three minutes each while traffic whizzed past them. This will be sped up in the final documentary clip. 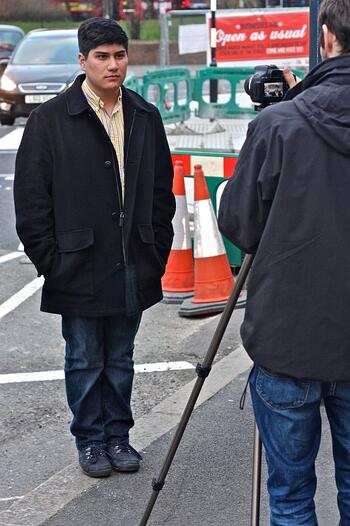 While waiting, Mike and Nicole had a bit of fun with a nearby phone box... 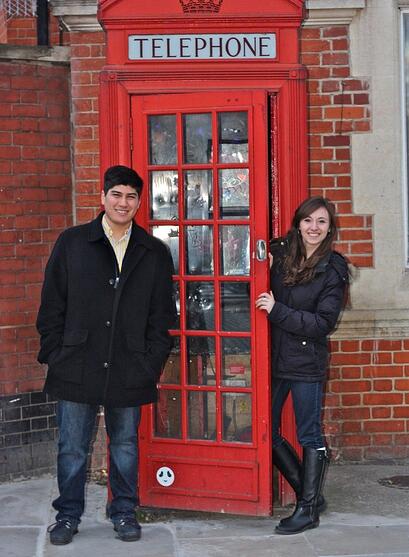 ...and Kerri tried to keep warm by hiding from the biting wind behind a map of the local area.

When we moved back indoors to wrap up, the sun had disappeared. It was time to get some shots of the interns and Jacques interacting, so they sat on the couch having a "meeting" and a laugh, talking about the differences between life in the US and UK and pronunciation of words in American versus British accents. 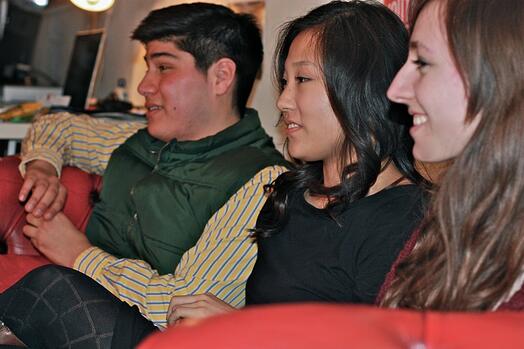 Photo: CAPA interns gathered on the couch for an informal meeting with Jacques

By then, it was Nicole's turn in front of the camera, perched on a red sofa cushion in front of the bar. Like Kerri, she is a journalism student from Missouri School of Journalism, with a focus on photojournalism. She talked about a unique experience she has had joining a Welsh choir during her time in London and ended up with a funny quip about London weather.

Photo: CAPA intern Nicole settled in for her interview

Last but not least, Tracc filmed each intern at their desks. (No, they don't always get to sit on the couch!) 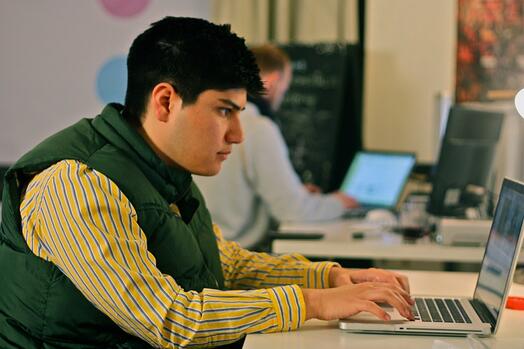 Photo: Mike at his desk 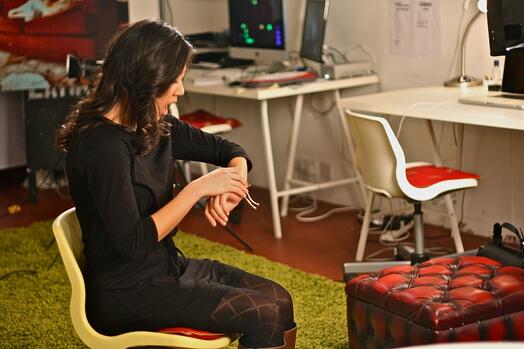 Photo: Simultaneous yawn and watch check? Yup, it's been a long day for all of us!

It was a long but productive day that resulted in some great footage. One more day filming at CAPA's London site and Tracc will work their editing magic to create the final video. 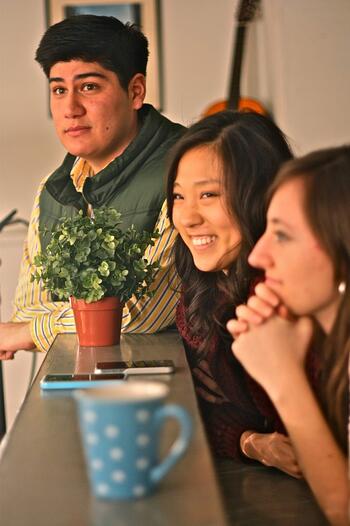 Photo: Mike, Kerri and Nicole happy to be involved in the CAPA documentary!