My Global Cities’ scorecard rightly includes the extent to which a city has "world class museums" which contribute to its prominence. Broadly, museums and galleries are of two kinds: those that contain important information about the city in which it is located (both wide spectrum and narrower specific focus) and are a great resource for local education and for informing visitors; and those that bring extracts of the world or the region to inhabitants of that city. Photo: Museum of London by kenjonbro

In my native London, the distinction would be illustrated by, among others, the role of the Museum of London (great detail on the Plague, the Great Fire of London, Victorian London and other features) versus the role of the British Museum where one goes, not to learn about London, but about many aspects of the history of the world.

Photo: The British Museum by Where The Art Is

The circulating of artifacts from one country to the museums of another makes an important contribution to spreading global understanding.

Photo: The Terracotta Warriors Museum outside Xi'an by Colin Speakman

A good example is the decision by the Chinese authorities to send a part of the famous Terracotta Warriors and Horses from their home museum about 1 hour ride outside Xi'an, a gateway to the West of China, to many museums around the world for temporary displays. They made it to the Global Cities of London, Paris and New York among other places. If they had known how much they would travel, some would have signed up for frequent flyer programs! As we publish this, 10 warriors of this army are on display at the San Francisco Asian Art Museum through May 27, 2013. 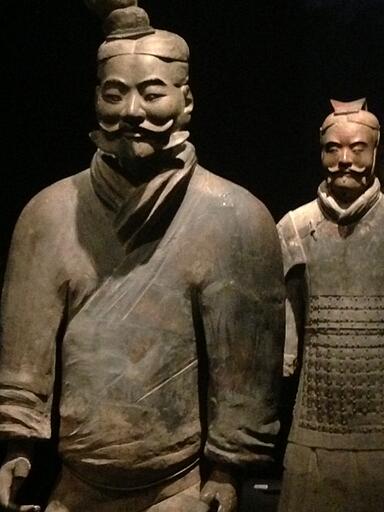 However the possession of one country's artifacts by another is sometimes contested - Museum Wars break out! A famous one is the battle by Greece to get back the Elgin Marbles (a collection of sculptures removed from the Parthenon in Athens over 200 years ago) and since displayed in the British Museum. It remains controversial, and it is a reality that "the Days of Empire" led to quite a bit of removing of treasures from around the world.

A current dispute is between Turkey and several museums, including the British Museum again, over the relics that were taken from the Mausoleum of Halicarnassus, near Bodrum on Turkey's Aegean Coast. Turkey is asking some of the most important museums in the world to return items and the Turkish authorities have refused to lend their possessions to international exhibitions until the claims have been fulfilled. As well as the British Museum, aspects of this impact on the Louvre in Paris, the Metropolitan Museum of Art in New York and the Pergamon in Berlin. Turkey has taken its case to the European Court of Human rights and it is seen a test case for international reclamation of art and relics, which would impact many museums. Nations desiring the return of cultural artifacts such as Greece’s Elgin Marbles, and Nigeria, desiring to retrieve the Benin bronzes, are keeping a close eye on the case. Hopefully, mutually-agreed temporary transfers between museums will continue to be the way forward as a "win-win" as the Chinese like to see it. I was reminded about this some years ago when taking students to the impressive Nanjing Art Museum (in China's old "Southern Capital"). I was told it had one of the largest collections in China. It was a large building but it did not seem that big. It made sense when the curator explained only about a third of the collection could be on display at any one time for space reasons.

That is a powerful reason for sharing parts of collections between museums. It is widely recognized that one museum showcasing a temporary special exhibition not only brings many visitors to it but also raises visitors to the museum generally - indeed win-win. On that note, let's take a brief look at what each of our eight CAPA International Education Global Cities have to offer as interesting museums and galleries.

Beijing has several leading Museums. The National Museum of China overlooks Tiananmen Square (with architecture deliberately designed to match the Great Hall of the People opposite). It's free to enter, but go early and expect a line. The Capital Museum (near Muxidi Metro station Line 1) is another where free tickets are booked online in advance with I.D. And, of course, there's the Palace Museum within the Forbidden City (Tiananmen East Metro Station line 1). Entrance fees are according to season. While in the Tiananmen Square area, a useful modern museum for learning about Beijing is the Beijing Planning Exhibition Hall which has modest entrance fees.

There's free entry on the spot with I.D.. It has a nice collection of tanks, cannons, jeeps, naval boats and aircraft - all in outdoor hangers. The inner galleries are under refurbishment right now. Also, we should call Line 1 the museum line!

The impressive Museum of Latin American Art of Buenos Aires (MALBA) is said to be one of the cornerstones of the cultural life of Buenos Aires. With an extensive permanent collection and a regular stream of new and exciting temporary exhibitions, MALBA should be at the top of the museum list for visitors to the capital. Founded in 2001, the museum is located on Avenida Figuerora Alcorta in Palermo in a building constructed to blend in with its surroundings - a must see! The history of Argentina would not be complete without learning about Eva Peron. So the Evita Museum, opened in 2002, is a recommend special focus. It's located in a historic mansion at the intersection of Eva Perón and Belgrano Streets, in Los Toldos. The National Museum of Ireland is the big one in Dublin and it has several sections. It is regarded as Ireland's premier cultural institution and is home to the best collections of Irish Art and History. It is situated on four sites: For Decorative Arts & History, go to Collins Barracks, Benburb Street, and for Archaeology, Kildare Street. For a specialty focus, consider The James Joyce Centre based in a restored 18th-century Georgian townhouse at 35 North Great George's Street. It is dedicated to the celebration and promotion of the work of James Joyce, one of the greatest writers in English language literature. Some people would say that the center of Firenze is a museum in its own right. They are right - you can see a copy of Michelangelo's David just by walking through a square. But, you'll need to go to the Accademia (Via Ricasoli, 66) for the real thing - a relatively small gallery which gets heavily visited for that one sculpture! There's also the Pitti Palace, great artwork inside of churches and so much more to explore in Florence. However, pride of place has to go to the amazing Uffizi Gallery (just North of the River Arno and East of the Old Bridge). It needs time (including often in a long line - I remember seeing those) to visit. It is considered one of the oldest and most famous art museums of the Western world - another must see. For a historical symbol, it is hard to beat the Hagia Sophia in Istanbul. It was a great architectural beauty and an important monument both for Byzantine and for Ottoman Empires of earlier times in Turkey. Once a church, later a mosque, nowadays (since 1935) it's a museum with wonderful mosaics. Hagia Sophia is situated on the European side in the Ultanahmet area, near the Topkapi Palace. For an equivalent to the Museum of London, consider Istanbul's City Museum, located inside the gardens of Yildiz Palace. You will find displayed the history of Istanbul since the Ottoman conquest: paintings depicting the social life of the Ottoman period in Istanbul, calligraphy, textiles, 18th and 19th century porcelains, calligraphy equipment and other objects of daily life. It is unthinkable to visit London and not go to the British Museum in Great Russell Street, Bloomsbury. Right from the imposing entrance, it oozes a rich and large reservoir of world history and it needs time to explore, so it's also great that there are good restaurants inside! So, what else to see? The Victoria and Albert Museum in South Kensington is high on the list, and there's the National Gallery (Trafalgar Square), the Tate Britain (Pimlico) and many more. Yes, London probably wins the "museum category" on the Global Cities scorecard. I found it hard to really "do" them all as a student or teacher there. For a contrast among so much history, consider the Tate Modern on the South Bank of the River Thames. It's modern architecture and in a popular area too. The classic museum in Shanghai is the Shanghai Museum (a large museum of ancient Chinese art, divided into eleven galleries and three exhibition halls). It is in People's Square (metro lines 1, 2 and 8) in the center of Shanghai Puxi. The museum is free to enter, but be prepared for a line. If you're interested in seeing life in Shanghai a century ago, see the mock-ups of old streets and shops housed in the museum in the basement of the Oriental Pearl TV Tower in Lujiazui, Pudong (an entrance fee is charged here).

Photo: The Shanghai Museum in Peoples Square by Colin Speakman

For something newer, turn to the China Pavilion, built as the iconic, permanent structure for the 2010 Shanghai World Expo. Many visitors could not get into it during that period as demand was too high. It has since been transformed from that role into a museum and gallery to showcase aspects of Chinese culture. It is near the Huangpu River in Shanghai Pudong. An admission fee is charged, but it's worth a visit if only to say you got inside the China Pavilion! 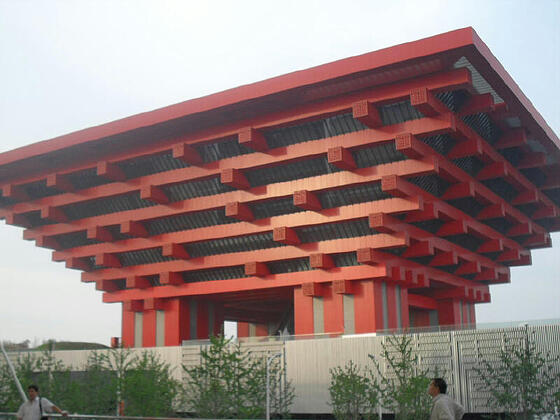 Photo: The China Pavillion in Shanghai Pudong by Colin Speakman

A big museum for Sydney is the Australian Museum in College Street. It is the oldest museum in Australia, with an international reputation in the fields of natural history and anthropology. Apart from exhibitions, the museum is also involved in indigenous studies research and community programs. Photo: Additions to the Australian Museum, Sydney by Eric

For a special focus - a cheeky one coming from a Brit - try the Hyde Park Barracks Museum - visit with a strong conviction! It was designed by convict architect Francis Greenway, and housed 15,000 male convicts in government employment between 1819 and 1848. Later, it became a female immigration depot and a government asylum for infirm, destitute women. Now it is a museum where you can explore the convict experience, lie in a convict hammock and discover the daily lives of other occupants at this popular landmark in the historic precinct of Macquarie Street.

If you have a favorite museum in a global city or in your own city at home, do tell us about it in a comment!