“I regard the theatre as the greatest of all art forms, the most immediate way in which a human being can share with another the sense of what it is to be a human being.” - Oscar Wilde 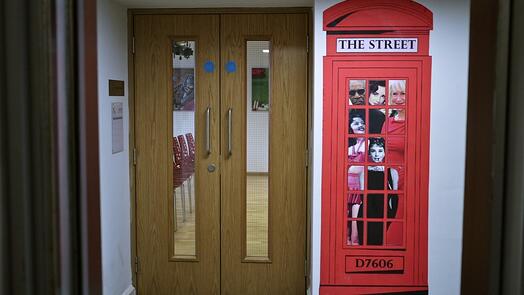 Tuesday night marked a very special occasion for CAPA International Education as we launched a brand new dedicated theatrical space in London. It will not only provide a laboratory for theatre students to bring their experiences alive on a stage, but will offer students significant rehearsal and performance facilities so as to enhance and expand CAPA’s Theatre Studies program. 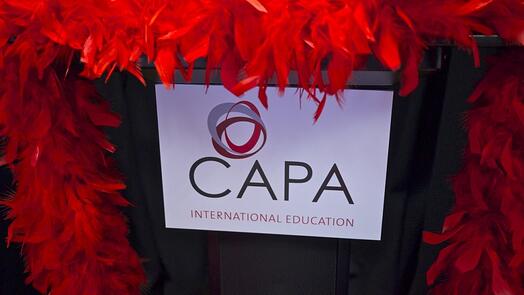 Theatre Studies at CAPA is designed to give students formal understanding of the aesthetics of theatre while developing an awareness of the context in which theatre functions as a commodity, an art form and a signifier of the complexities of political, social and emotional realities. 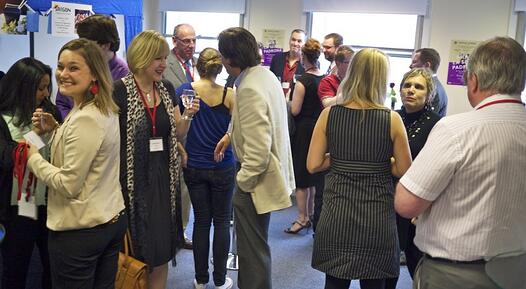 Students engage with the world of theatre beyond the classroom and have the opportunity to analyze and explore the diversity of forms, environments and functions that, in combination, create the rich landscape of London’s theatre. 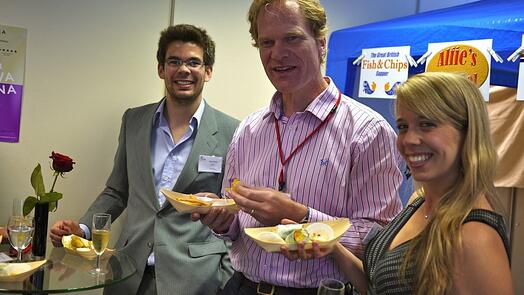 This is also a venue for ALL of our students to express themselves through art, poetry, story-telling, comedy and personal experiences. 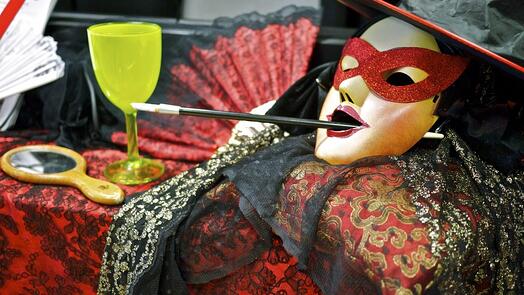 In addition to this, we like to think of it as one of London's new hidden venues for art and performance that all CAPA partners can use and where people from the local community can take advantage of the creations that will come alive here, across many genres. 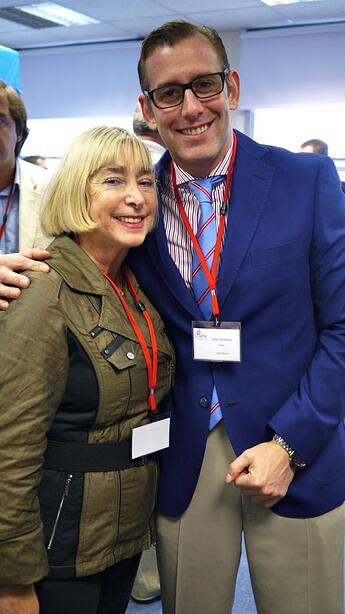 It can even be a disco! We have installed a lighting system with new LED technology that is expected to revolutionize the theatre industry over the next 10 years. It is the first installation of its kind in the country which is in sync with CAPA’s value of innovation. Its functionally was amusingly demonstrated by the audience clapping together which triggers the lights to change color. 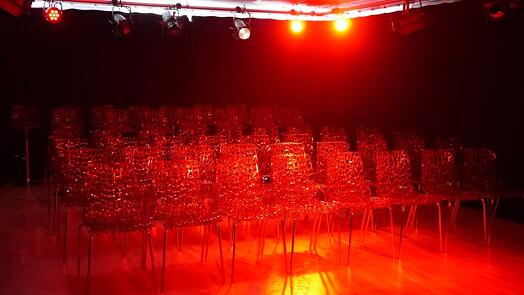 The theatre itself has a theme that was inspired by one of our students. He met with CAPA's President and CEO John Christian to say thank you for what he described as a life changing experience he would never forget and that would shape many of his future decisions. When John asked what made his study abroad experience so life changing, he said “My courses were amazing. I did really well academically, but what I learned about the world, people and myself was out there.” John asked “Where?” and the student replied, “On the street!" Inspired, as “the street” is truly full of lessons to be learned in all of our global cities, we’ve named the theatre space The Street.

Outside the entranceway, there is a traditional red London phone box with the name of the space at the top. It was put up by British paste-up street art D7606 with an assortment of actors and actresses “trapped” inside. We also brought some real street art inside the theatre with one wall a mural painted by London-based Italian street artist RUN. He managed to incorporate the CAPA rings in a assortment of faces that represent the diversity of people you meet on the street. RUN has recently painted the Village Underground wall in East London, was involved in the Chichester Street Art Festival also in the UK, but has painted widely on an international level, including most recently in Gambia and Senegal. Additionally seven large canvas photography prints by Stephanie Sadler, taken on the streets of London – the work of other street artists and street scenes from around the city. Street art is an unusual sight in West London so we are excited to have these special pieces in our old Victorian building on this side of the city! 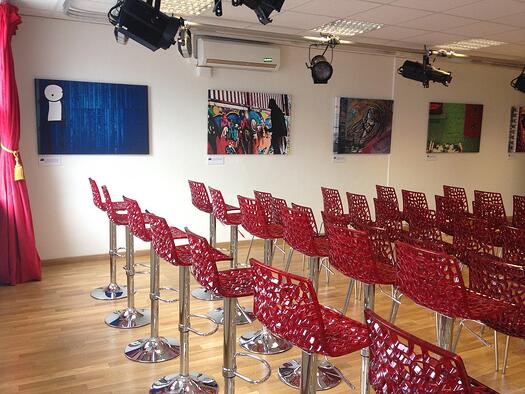 The launch event for the theatre was catered with an international street food theme, where a variety of food, from takeaway boxes with a noodle dish and chopsticks to mini fish and chips servings were served from a street food tent. 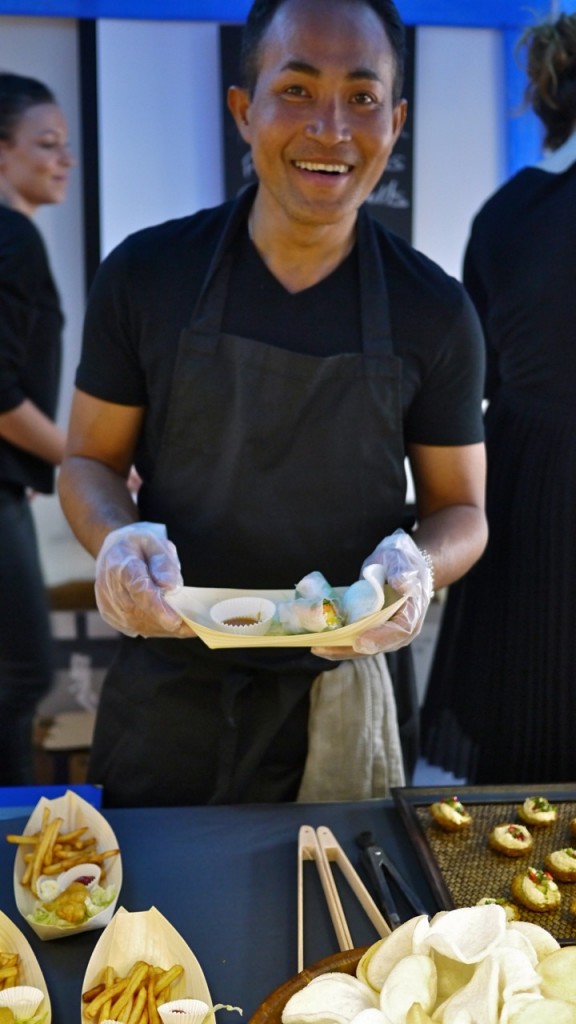 Special guests included Martha Johnson, Zach Mohs and Joe Price from the University of Minnesota who run the top actor producing BFA programme. The University of Minnesota is one of CAPA’s longest standing partnerships. Martha spoke about their excitement for students to have this new flexible space at their fingertips when they are studying abroad in London. It was also her birthday the day before so John presented her with a card signed by CAPA London staff and her guilty pleasure in life – a copy of Hello magazine which he joked was all we could afford after building the theatre!

We then heard from Professor Michael Punter who recently took on the new position as CAPA’s Director of Theatre Education. He spoke about what theatre means and why it is important and expressed his excitement about CAPA’s work and enthusiasm in this subject. Michael will support the University of Minnesota BFA actor training program and will further develop this area of studies. It currently includes courses on “Theatricality: Understanding the Possibilities of Theatre”, “Modern Acting”, “Shakespeare in London” (taught by Alycia Timmis) and optional theatre internships. 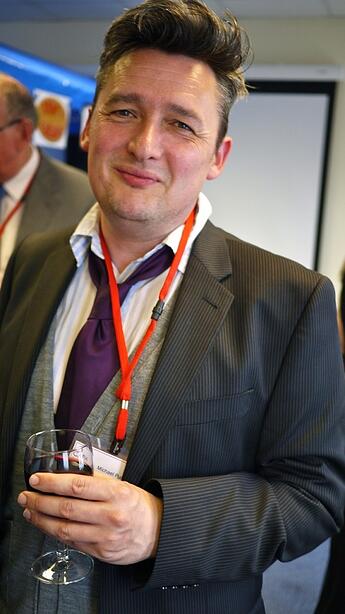 Following these short speeches, we were treated to the first performance in the new space. The Pop Up Opera, led by Clementine Lovell, is a group whose mission to make opera an accessible experience for everyone is in sync with CAPA’s own value of accessibility in study abroad. Everyone enjoyed the energy the performance of two one-act operas - Donizetti’s Rita and Pergolesi’s La Serva Padrona – added to the evening and a few people have even noted that there’s a sense of inspiration and creativity lingering in the building this morning. 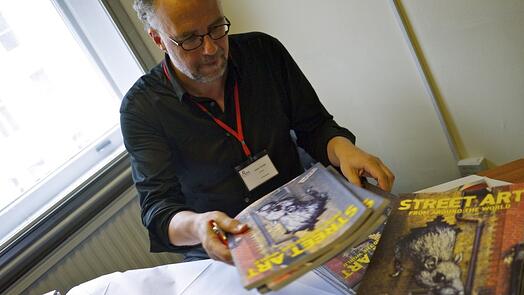 Those who attended were given a special gift Garry Hunter’s book “Street Art Around the World” which he was present to sign with personal messages for all. 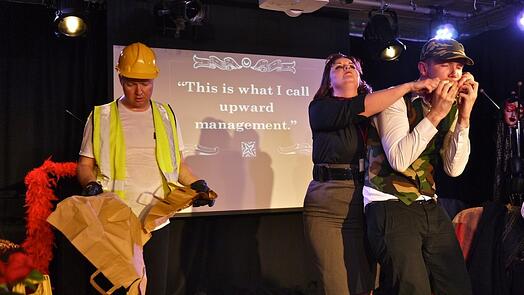 We are all very excited about all of the creative pursuits this new and innovative space will allow! 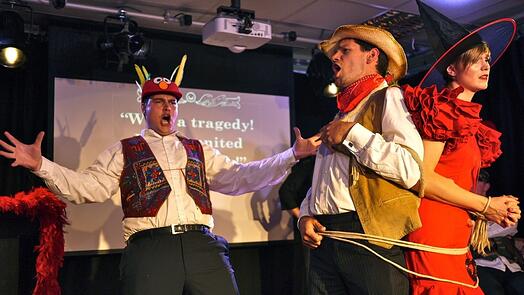 John would like to acknowledge Stephanie Sadler for her work in bringing street art to the CAPA London Center through her contacts with street artists like RUN and D7606 and her amazing photographs of various other street art pictures as well as the work of Alex Paxton whose project management ensured the theatre was completed on time and functions flawlessly. Their efforts are truly what made this launch event a notable success for CAPA! 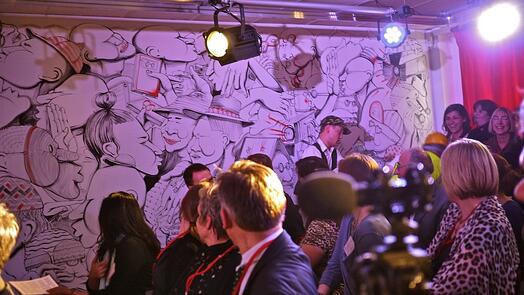 Keep tuned for more information on the CAPA theatre track and future events on THE STREET.

Some news outlets have picked up our press release on this story: