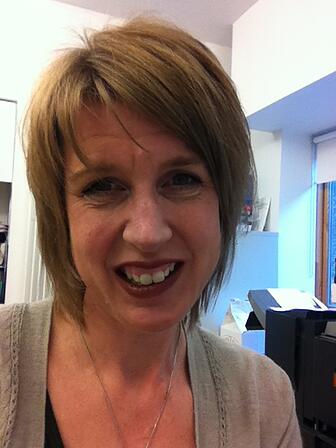 Meet Sara Bennett, the manager at Fighting Words in Dublin, a creative writing center that has recently partnered with CAPA International Education to offer internship opportunities to CAPA Dublin interns. Read on to find out what she expects of CAPA interns as well as what volunteers will gain during their experience. She also has some cafe recommendations and tells us her best Dublin discovery.

CAPA WORLD: Tell us a bit about yourself and your interests.
SARA BENNETT: I'm the Manager with Fighting Words, the creative writing center for children and young people in Dublin. I've been with Fighting Words since it opened in 2009. Prior to that, I was Human Resources Manager for Amnesty International Ireland. I'm originally from Connecticut. I received my BA in history from Wheaton College in Massachusetts and then lived in Boston for a few years. I moved to Dublin to pursue graduate study in history at Trinity College Dublin. I met my husband there and have been in Ireland ever since! I live in north County Dublin and have two children, aged 12 and 3, who keep me busy!

CW: Give us some background on Fighting Words where you work as a Volunteer Co-ordinator in Dublin.
SB: Fighting Words is open to writers of all ages but our focus is on children and young people. We opened our doors in January 2009 and have worked with literally thousands of children. During the school year, we host a different class of primary school children each morning. We work with secondary school students in the afternoon. In addition, we run evening and weekend workshops - some are one-off events while others are part of longer projects. For example, we have different groups of students making films, writing plays and devising a musical. In the summer, we run week-long summer camps that focus on a different aspect of writing each week: it could be journalism for 10-13-year-olds one week followed by comedy writing for 14-17-year-olds the following week.

Fighting Words was inspired by 826 National, a network of writing centers that was co-founded by Dave Eggers and originated in San Francisco. Since we've opened, we've inspired other writing centres in London, Stockholm, Vienna and Milan.

CW: You’ve recently partnered with CAPA International Education to take on some study abroad interns! What sort of tasks will they be given?
SB: Our interns are a key part of the Fighting Words team. They manage individual workshops - assigning roles to the volunteer tutors, helping students with their writing, etc - help with administration tasks in the office and get involved with the various longer term projects.

CW: What are your main expectations of CAPA interns who will also be studying while they’re in Dublin?
SB: We expect the CAPA interns to be flexible and to do what needs doing on any given day. On some days, that could be leading a workshop. On other days, it could be managing the school bookings and entering information on the online calendar. We hope that they will gain insight into the workings of a small nonprofit, that they will learn about the Irish education system and that they will be inspired by the children and young people. And of course we hope that they will enjoy the experience - we definitely expect that!

CW: What can CAPA interns expect to learn from their experience at Fighting Words?
SB: As I said above, they can expect to learn about managing people, some practical administration skills and most of all, leading workshops for children and young people. We expect the interns will already love writing, literature and enjoy working with kids, so this is an fantastic opportunity to build on their knowledge and experience in those areas.

CW: As someone who works for a creative writing center, tell us – what is it about the relatively small city of Dublin that has made it into such a hub of creative minds, a long history of writers in particular?
SB: I don't know how well placed I am to answer that question - I am still waiting for my own Nobel Prize for Literature - but I expect the rain has something to do with it. If the weather is bad, you have to stay inside and entertain each other. Telling stories is a good way to do that.

CW: Where’s your favorite place in Dublin to go for creative inspiration?
SB: There are some fantastic outdoor spaces - it does not rain all the time, I promise! The Phoenix Park and St Stephen's Green are well known, but I also suggest the Iveagh Gardens in the city centre. It is a bit of a hidden gem. The beaches are also lovely: I live in north County Dublin and recommend a walk along the strand in Skerries or Portmarnock or taking the DART (the suburban train) to the village of Howth.

CW: Dublin has long been known as a city of literature, but which Dublin writers are making the biggest impact so far in 2013?
SB: Kevin Barry, Laura Jane Cassidy, Barbara Bergin, Helen Seymour, Shauna Gilligan and of course Roddy Doyle - they've all had books or television shows out in the last year and they are all Fighting Words volunteers!

CW: What are your best recommendations for places to eat and drink in Dublin away from the tourist trail?
SB: Cafes: The Fumbally, The Cake Cafe, The Queen of Tarts, The Silk Road Cafe, Brother Hubbard, Dux & Co and for pubs: The Palace (especially upstairs), Grogans, The Library Bar in The Central Hotel, Peter's Pub and The Market Bar.

CW: What’s your favorite Dublin discovery?
SB: The markets: great stuff to buy and to eat. Try the Cow's Lane Market and the Temple Bar Market on a Saturday and the Dublin Flea Market, which is on once a month on a Sunday.