When I first traveled to Florence, Italy, to study abroad, I felt like I traveled to a completely different planet. In this case, the tricky element was that the “aliens” were human beings just like me. They spoke in a language I didn't understand, carried themselves differently than people at home in Chicago, and created a completely different atmosphere than I was accustomed to. Yet, we still had a basic and significant common ground. All of us were human beings, but we were “aliens” to each other. We were similar in that regard, but our sharp cultural contrasts pierced the air we breathed. Actually, I was the “alien” to this distant land. It wasn't just because I was a temporary immigrant, but I probably sparked as much curiosity in the Italians as they did in me. All I knew when I first landed in Italy was that I was beginning an adventure that would change my life forever. I would soon become a more realized “me.” 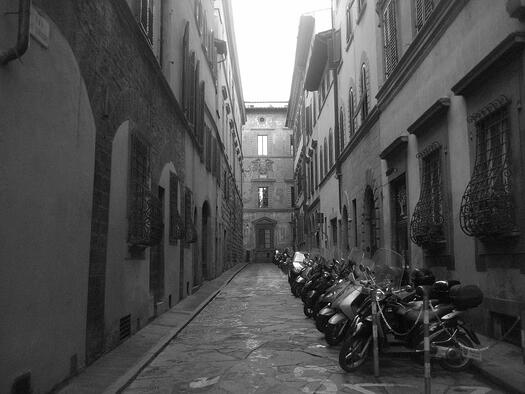 I was immediately humbled when I first arrived in Italy. I landed in the Pisa airport, and boarded a bus for an hour and ten minute ride to Florence. Before departing the US, I heard that people in Italy knew how to speak English, and figured I could use English when things became difficult. Even though I struggled on the plane ride to try to learn words in Italian, I decided not to embarrass myself with terrible Italian, and just to use English to ask questions at the airport. I initially tried using Italian with natives when I landed, but figured that it would be easier for me and the natives if I spoke in English. With this attitude, I approached an Italian man who worked at the airport to ask him where I could find the bus I needed to take. I engaged him in English, asking where I could find my bus. I didn't think twice about it, and expected him to reply as if my actions were normal. In the middle of my first sentence, he threw his hands up in surrender and pleaded with me, “Please, slow. I speak little English.” I was instantly more embarrassed than I was for my limited Italian. I kindly tried my best broken Italian and ended up getting the job done. As I walked to the bus stop, I began thinking, “How dare I walk into this man’s country and expect him to adjust himself to my language? Nice going Mr. Big and Bad American.” It was in those moments that I realized even more that I was in a country far from home. It was in those moments that my environment transfigured before my eyes, making me feel like I landed on a different planet. And it was in those moments that I became scared, but my excitement for my new journey trumped my fears.

Once I became settled, I often ventured through Florence by myself to keep myself from getting too comfortable. I often intentionally distanced myself from the American students in the study abroad program to fully embrace the experience. There were times when I socialized with the other students, but even that was very limited. I was blessed enough to have my entire trip funded from scholarships and financial aid, so I did not want to waste my experience by limiting myself to what I already knew. When I walked the streets, I engaged strangers in Italian to ask for directions or strike up conversation with restaurant owners. In the beginning, I didn't understand a lot, but I didn't care because it helped me become more accustomed with the language. I tried new food, welcomed people who wanted to connect for whatever reason, and sacrificed convenience and comfort to continuously integrate myself into the Italian culture. Even though it was difficult, it was rewarding to become so engulfed that I questioned many of my own cultural beliefs. I scrutinized my American culture even more on matters of our lifestyle in order to make decisions about how I want to live my life. I also often questioned myself in regards to my personality, and found many truths about myself. 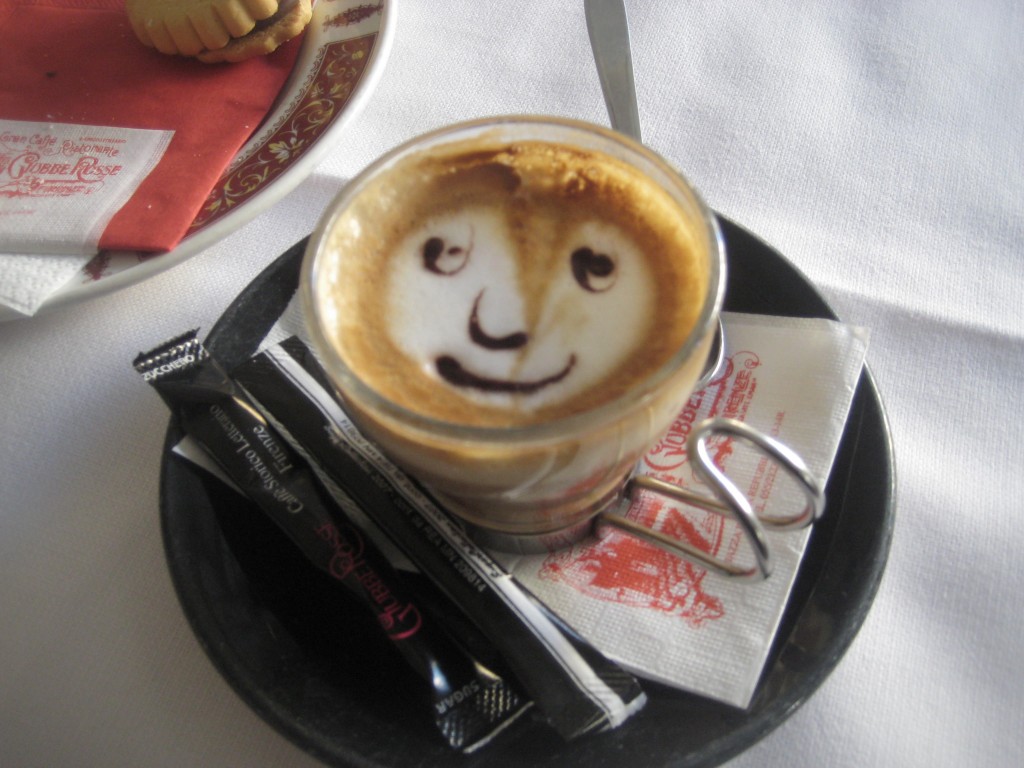 Living in a completely different environment where no one knew me provided a platform for me to shamelessly explore the totality of who I am. Learning more about myself in such an atmosphere helped me to define, accept and appreciate details about the core of my identity. Since there was no one who knew me well, I literally didn't have to live up to familiar people’s expectations of how I usually behave in situations. I accepted the privilege to observe my actions under a microscope, and to question them. I asked myself things such as, “Am I doing this because people back at home expected me to? Am I reacting truly to the situation at hand? Do I really feel this way, or is this just a habitual reaction?” I think this approach even helped me to recognize coping mechanisms I was using in my new environment so I could make conscious choices about them. 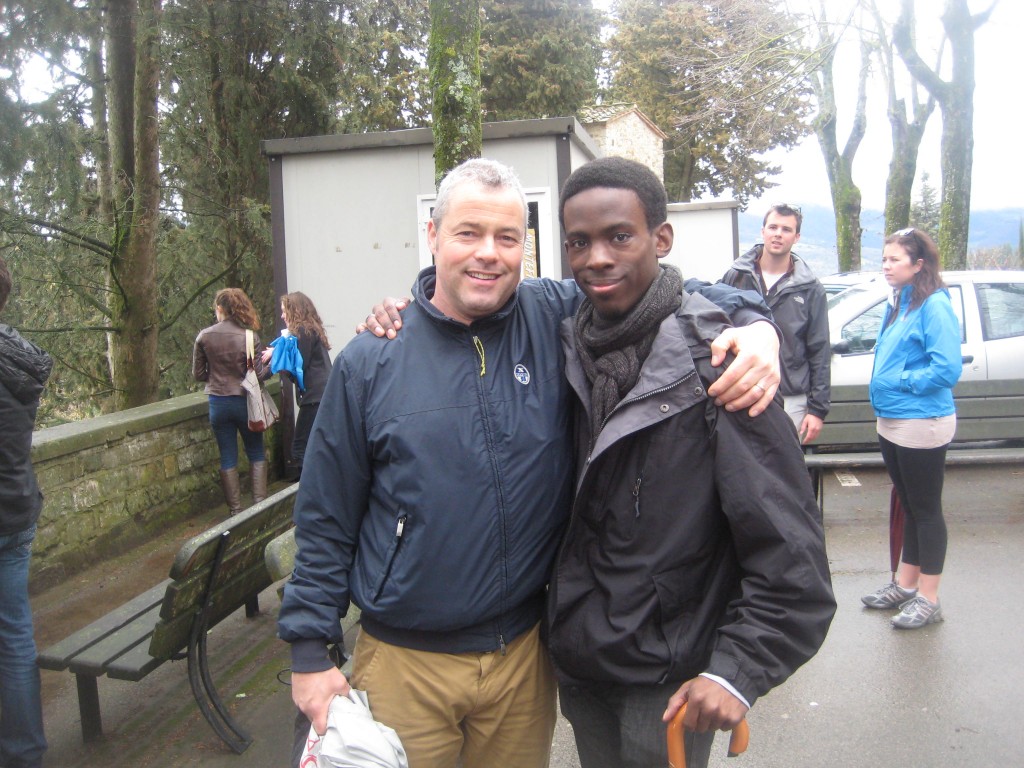 The even greater privilege was permission to making conscious choices after answering questions like these as truthfully as possible. This was an ongoing process, and it enriched my interactions with other people in Italy. As I engaged more people, I had even more liberty to be myself, which helped me to appreciate factors that made those people beautiful. In those situations, I was more concerned with listening to people’s perspectives than expressing my own thoughts about the world and life in general. This was crucial to learning how people think in different parts of the world, giving me a fresh perspective on our international community.

One of the greatest decisions I made was to stay with a host family. There was no way that I could have imagined traveling 4,700 miles away and not connect with a native family, which is culture’s nucleus. On top of that, my host family was lovely. They respected me as their guest and treated me as part of their family all at the same time. I believe this is one of many expressions of Italian culture’s masteries; blurring the fine line between being a guest and being considered as family. My desire to connect with the family as if they were my own probably made our relations more diplomatic, making our connections smoother. I decided to discard as many of my American customs as possible in order to integrate myself into the Italian household as much as I could. I didn't want the family to only categorize me as a foreigner, but as someone that they could trust and connect to. However, it is impossible to fully integrate into any family or group of people, despite cultural similarity or difference, in three and a half months. 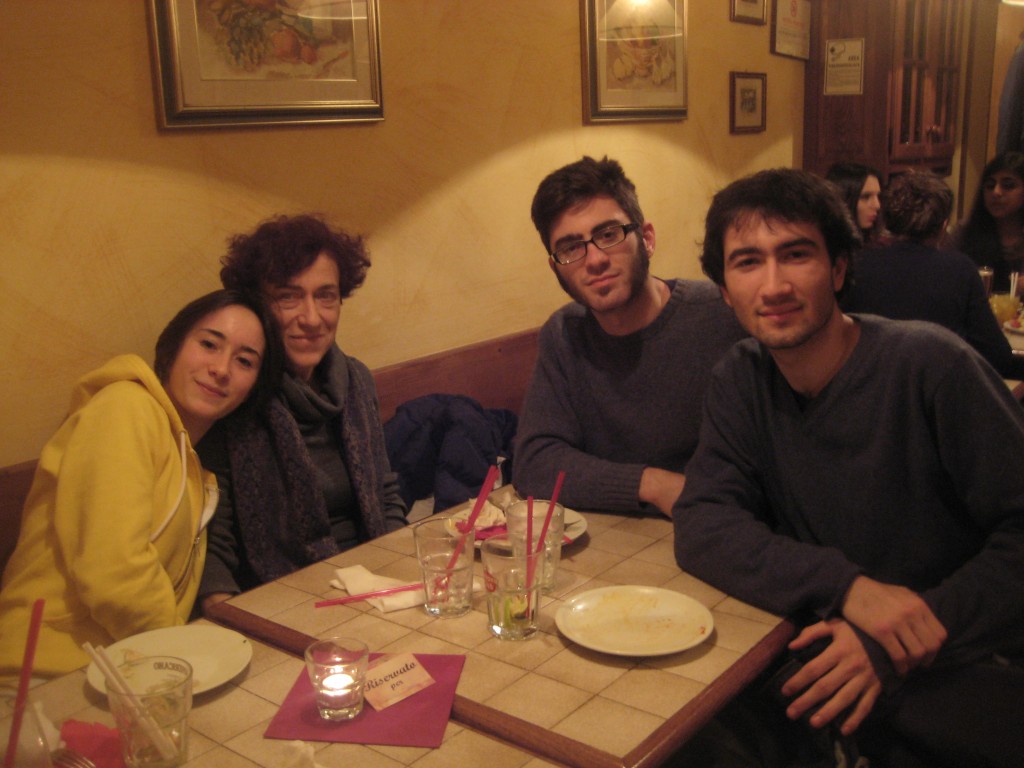 I still remember the first day in my host family’s house. They told me that they hosted Americans before, so I could only imagine what they already thought about me based on their last experiences with Americans. My host mother asked me if I wanted her to cook things for me like eggs and bacon for breakfast, since she knew it was an American custom. I responded to her by asking, “Well, what do you all do?” “We usually eat cereal and biscotti (Italian cookies) or bread, yogurt, and other things,” she replied. “Well, however you do things around here is how I would like to do them,” I said. She thanked me, but I don’t think I realized the depth of her thanks. On the surface, she was thanking me for not breaking her normal routine. On a deeper level, she probably thanked me for not placing a burden on her by trying to “Americanize” her house for my convenience, but submitting to her way of life instead. I felt it was my duty as a visitor, and it was an honor. 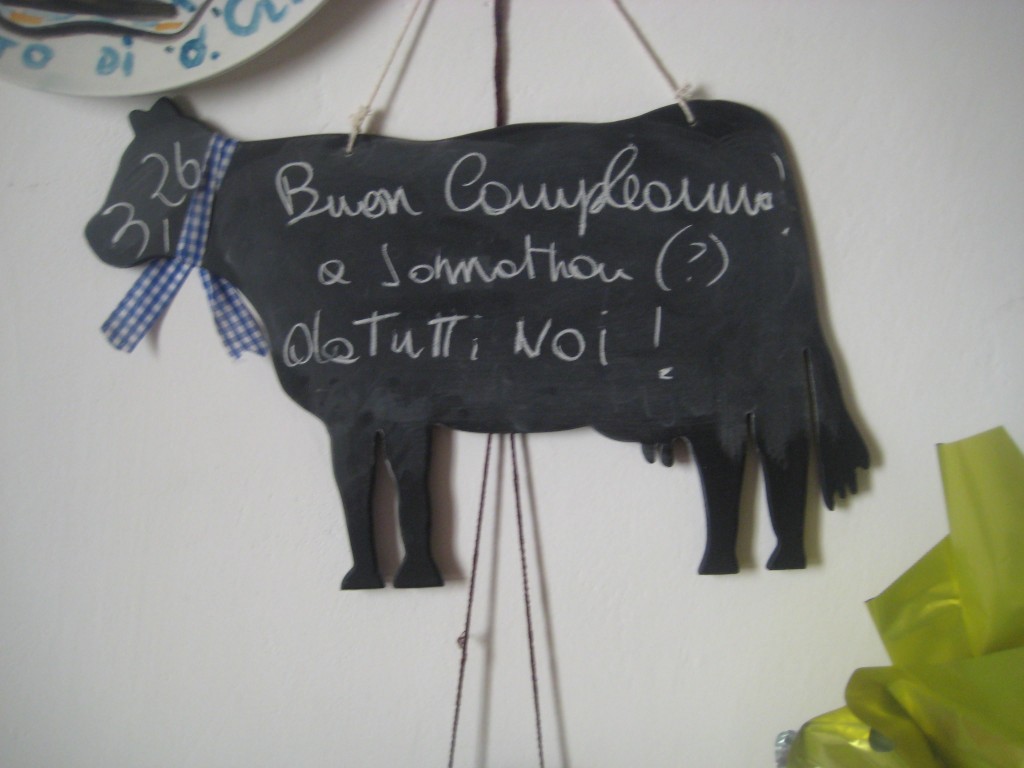 Living with this particular family was rewarding, because I reaped a lot more than just learning about the family customs and practicing Italian. I witnessed and participated in a completely different life rhythm. My immediate family is very close, but watching the high regard that my host family gave each other inspired me to love my family even more. They acknowledged that they (like all people) have flaws and make mistakes, but they acknowledged those things as contributions to their complete selves. The family’s collective dedication towards balancing education, work, and enjoying life also greatly affected me. I myself have always been inclined to work hard, but usually had a hard time with balancing my life. Watching this family in action provided a concrete example of how this is very possible, and was like listening to a skilled artist playing a brilliant composition. In this case, it was music to my eyes. 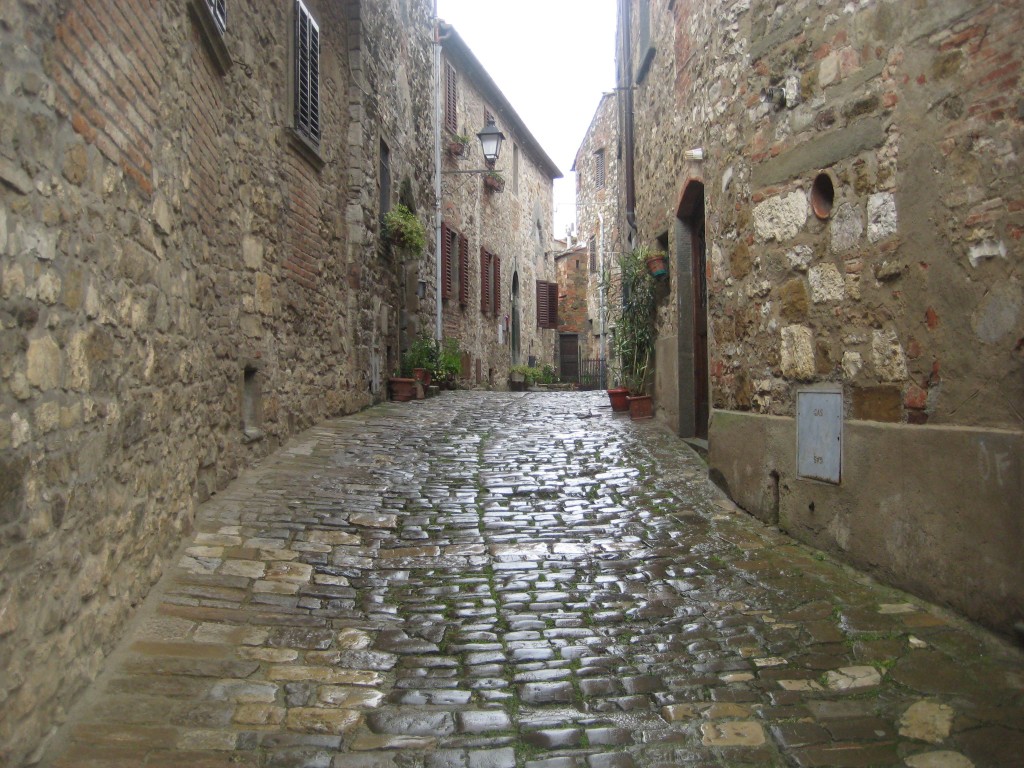 I used the same attitude as I did with my host family in my hunger to learn more about the culture. Since this was my last semester of college, I had the liberty to take whatever courses I wanted in order to fulfill electives. I used that freedom to my advantage, so I could take as many classes about Italian culture as possible. It was such a privilege to dig deep into different aspects of the culture through an Italian language course, Cross-Cultural Psychology, Cultural Anthropology, Art History, and Beginning Drawing. I felt as if these classes were a preparation for the laboratory of the outside Italian world. They equipped me to explore and take risks, which overall enriched my experience. 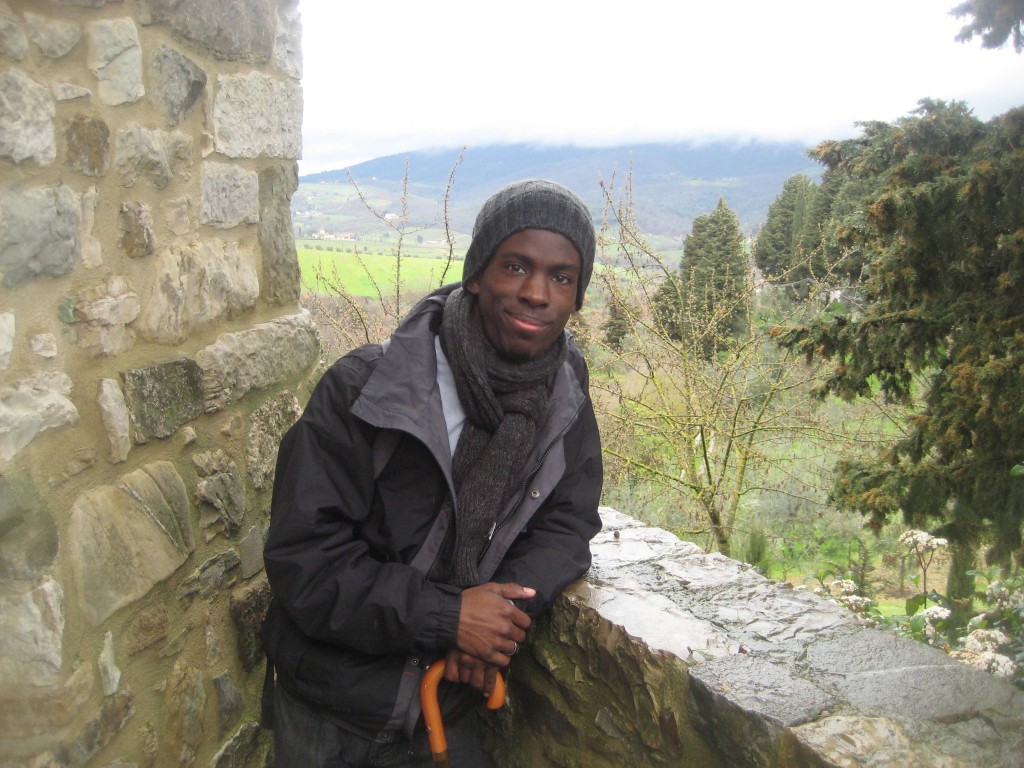 Gaining a clearer picture of myself helped me to come to conclusions about people universally. I think that it is absolutely beautiful that there are so many different brushstrokes of human culture worldwide, but human beings are the source of the brushstrokes. In order to see subtle highlights of my personal hues, I needed to break completely out of my comfort zone. Studying abroad in Florence made this possible beyond my wildest dreams. We all may have different fashion styles, ways that we interact with strangers, or speak different languages, but we all have hopes, dreams, fears, struggles, joys, disappointments, and triumphs. From the lack of understanding, we may seem as foreign as aliens from outer space to each other. However, when we break the threshold of fear and dare to understand each other, we can see how extra-terrestrially beautiful we all are.