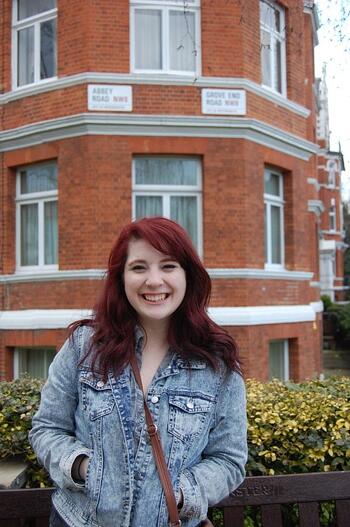 Susie Blair spent Spring semester 2013 studying abroad in London with CAPA International Education. Below she tells us about her favorite course "Writing the City", her adventures to the East End, where to find the best pizza in Ealing and why she returned to the States feeling prepared to face obstacles in her professional career.

CAPA WORLD: Tell us a bit about yourself and your background.
SUSIE BLAIR: I’m a born and bred Massachusetts resident and I go to school at Northeastern University in Boston, where I study Journalism. I studied abroad with CAPA International Education in London in Spring of 2013, which was my third year of college.

CW: Why did you choose to study abroad in London specifically? Think back to the moment you arrived and share your first impressions of your host city.
SB: I've always been an anglophile – that is, I’m obsessed with British culture. I love living in a metropolitan environment but I've never lived in a city as huge as London and thought a study abroad experience was the perfect opportunity to do so. My first impression of the city was how insanely polite everyone was! At the airport, on the train, and on the sidewalks, so many people offered to help me with my huge suitcase – something that would have never have happened in Boston.

CW: What has surprised you most and why? How did your view of the city change from the time you arrived to the time you left?
SB: Before I left, friends and family were constantly warning me about how expensive a city London is. However, after spending a while there, I learned how to live cheaply – where to eat, shop, and go out to save money but still enjoy myself. London is as affordable as you want it to be if you make the effort!

CW: Tell us the story of a memorable interaction you've had with a local.
SB: I randomly got into a conversation with someone at my favorite Irish-style pub about Boston. Turns out, Irish people often go to Boston before they visit any other city in America because of its rich Irish culture. We talked about places I see almost every day back home. It was a surreal coincidence.

CW: Talk a bit about CAPA academics. What were your favorite classes and why?
SB: My favorite class was my creative writing course called “Writing the City.” Since I’m majoring in Journalism, my writing is pretty strictly non-fiction, so I took this course to see if I could stretch myself to write more creatively. I was surprised at how much I enjoyed myself and learned a lot about how journalism and creative writing both differ and overlap. We also took great field trips for inspiration that exposed me to parts of the city I probably wouldn't have sought out on my own. 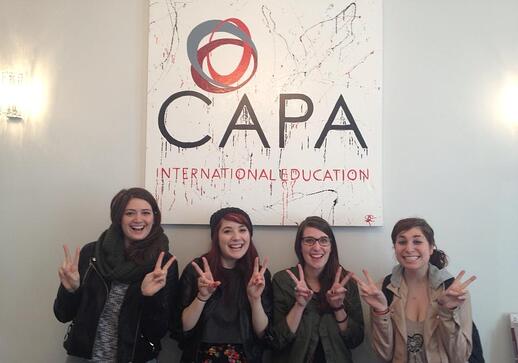 CW: Did you participate in any MyEducation events? What did you learn about your host city from your experience and how did it tie in to what you learned in class?
SB: The MyEducation events taught me about how culturally diverse London is. I took several to the East End, which is the most interesting place in the city, in my opinion. So many different Asian and European cultures are represented and there’s such a great history of social justice and activism there. There’s a lot more to the culture of London than just the royalty, which I discovered during MyEducation trips.

CW: Close your eyes and think back to your time in London. When you hear each of the following, what first comes to mind?
SB:
Taste: Tea! I’m a self-professed coffee addict, but tea is so much more commonplace than coffee in the United Kingdom. Soon, I found myself choosing tea with a bit of milk over coffee.
Smell: The underground has a kind of distinct musky smell that’s a bit startling at first but now I sort of miss it.
Sight: I know its cliché, but it really is Big Ben! As soon as you exit Westminster Tube Station, there’s a fantastic view of the Tower that made me swoon every time.
Texture: Lots of woolen clothes that kept me warm during chilly, rainy days.
Sound: The birds that lived in the tree outside my window in Ealing that woke me up with their pretty chirping every morning.

CW: How have you felt since you returned to the US? Have you felt any sort of reverse culture shock? Talk about re-adapting to life back home.
SB: I found myself saying things with a sort of weird accent when I first got back – I guess my American accent merged with the English ones I was hearing. My friend said I sounded Canadian! I also found myself saying things like “flat” instead of “apartment” and “queue” instead of “line.” As far as re-adapting goes, I miss how polite people are in London compared to Boston – and how much more reliable the public transportation is!

CW: What skills did you learn while abroad that will help you in your future career?
SB: I learned how to be self-sufficient and independent. I don’t feel like I need much direction anymore and can figure out most things on my own. I learned how to navigate and live in an entirely new city, so I feel prepared to face other obstacles in my professional career, too.

CW: Share your favorite restaurant in London. Also, what was your favorite London discovery that other students should be sure not to miss? Why?
SB: Santa Maria has the absolute best pizza in Ealing – maybe even London. My favorite discovery was the fact that so many stores give student discounts and restaurants (cafes, mainly) charge you less to eat in than to take your food out!