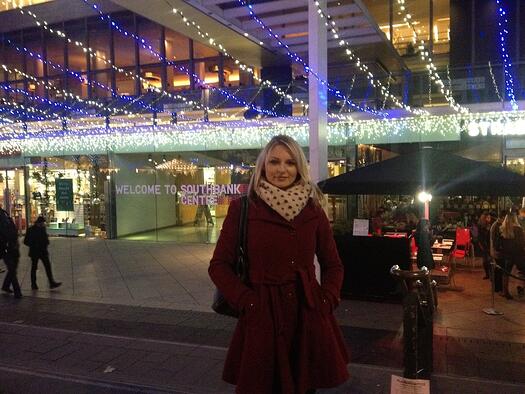 Mary Dolan is the Digital Communications Officer at Crimestoppers. She is also the supervisor for CAPA International Education interns in London who are completing a placement here. Below, Mary shares a few questions CAPA interns are asked in their interview along with some tips on how to prepare, what to expect from an internship with Crimestoppers and her favorite London discovery.

CAPA WORLD: Tell us a bit about yourself and your interests outside of Crimestoppers. How long with CAPA interns?
MARY DOLAN: I've worked in the charity sector now for a number of years and I find it hugely rewarding. Before that I worked in the public sector and prior to that, in financial services. My interests outside of Crimestoppers include visiting galleries and exhibitions, going to the cinema and also the theater. I've been supervising CAPA interns since I started at Crimestoppers UK, so for almost four years now.

CW: What is your position at Crimestoppers? Give us a bit of background on the organisation.
MD: My role at Crimestoppers is Digital Communications Officer and I've been with the charity now for just under four years. The organisation’s core service is to provide the public with a means to pass on vital information about crime and criminal activity whilst remaining completely anonymous. In the 25 years that Crimestoppers UK has been running, no one has ever been identified after using the charity’s service and this is something that we pride ourselves on. In addition to providing this anonymous route for the public to fight crime in their communities, we also work on international, national and regional campaigns, which target a wide range of crimes.

CW: Describe a typical interview with a CAPA intern. What are some examples of questions they should be prepared to answer? What else is important for them to keep in mind when preparing for their interview?
MD: Our HR Officer and I interview all of our CAPA interns. We use a structured list of questions to base the interview around, but we emphasize that it is informal. Examples of the type of questions we ask are; what are you looking to gain out of your placement with Crimestoppers? Which skills are you seeking to develop or improve upon?

As with any interview, it is important to have thoroughly researched the organisation beforehand. As well as looking at their website I recommend that you follow the organisation on Twitter and like them on Facebook as well. This way you will be ‘in the know’ about the organization’s recent activity which you can mention during your interview. Being proactive and informed in this way is likely to impress your interviewers even before the placement has begun.

CW: Share a few examples of the tasks that CAPA interns take on at Crimestoppers.
MD: Some of the tasks undertaken by CAPA interns at Crimestoppers include copy writing for the organisation’s intranet (our internal website, accessed by approximately 600 users) as well as our national website, which receives around 70,000 unique views per month. They are also trained on how to use content management systems, so that they can edit the charity’s intranet and main website. Other tasks include drafting social media content and conducting research for campaigns.

CW: What are your main expectations of CAPA interns?
MD: I expect a conscientious approach and an effort to work well as a team. Our Communications team at Crimestoppers is relatively small for a high-profile national organisation, so it is essential that we all pull together in order to be successful in what we are trying to achieve.

CW: What can CAPA interns expect to learn from their experience at Crimestoppers?
MD: Some of our interns have joined us having never worked in an office environment before. There are, as you would expect in any workplace, certain conventions of working in an office which we try to teach as best we can, whether this is how to word an effective e-mail or how to answer phone calls in a professional manner.

I hold an initial one-to-one with all of our CAPA interns, drawing upon what was discussed during their interview, then we discuss in depth exactly which skills they wish to develop or improve and which tasks are suitable for them. Therefore the tasks given are tailored for each intern, to ensure that they get the most out of their placement and their expectations are managed.

CW: Is there something that you've learned from working with CAPA interns over the years?
MD: I’ve learnt a great deal from working with CAPA interns over the last four years. As a supervisor to junior team members, I believe that it’s essential to be approachable. It’s perfectly normal for interns to have plenty of questions as they settle into their role and undertake many tasks for the first time. Therefore, it is imperative that they feel comfortable enough to ask those necessary questions in order to learn and to be able to get things right.

One example of this support is from Kemi, our most recent CAPA intern. Crimestoppers launched a new website recently and we wanted to ensure that it didn’t suffer low traffic due to old web links taking people to the previous website. Kemi undertook the major task of contacting all the web editors of those websites which ranked highly as a traffic source to the old site. She was very organised in doing so, maintaining a spreadsheet of her progress which could easily be followed up on her departure.

Another example that comes to mind is from Alex Shesterkin, a former CAPA intern, who conducted a wealth of valuable research during a period where the charity was assessing the need for a re-brand. Undertaking a re-brand is obviously a significant and costly exercise, so Alex’s preliminary research was invaluable and highly praised by all members of the Communications team.

CW: Do American interns point out the differences between the workplace back home and the workplace in the UK? What examples have you heard?
MD: Working with the Communications team here at Crimestoppers UK, CAPA interns often comment on the different spellings used in US English and UK English. Other than this, there seem to be very few workplace differences. However, there are many cultural differences in the wider sense which we often chat (and laugh about) as a team.

CW: What is your favorite London discovery and why?
MD: The great thing about London is I've lived here for most of my life and yet I’m still constantly discovering new sights and sounds to enjoy. This week I saw an emotive exhibition showcasing some of the most notable press photographs from the last two years and last week I went ice-skating at the rink outside the Natural History Museum (something I recommend to anyone visiting London in during the festive season!) My favourite discovery though would be the Tate Britain gallery. This is because it is often overlooked by the imposing Tate Modern, yet this, the original Tate gallery, really does have a lot to offer and the building itself has a fascinating history.