Michael Baptiste is CAPA International Education's second student from Florida Memorial University (FMU), an historically black college and university in Miami, to study for a Fall semester on the CAPA Program in Beijing at Capital Normal University (CNU). Here Michael reflects on how this helped him fulfill his dream of traveling to China, understanding more about China and meeting the locals. 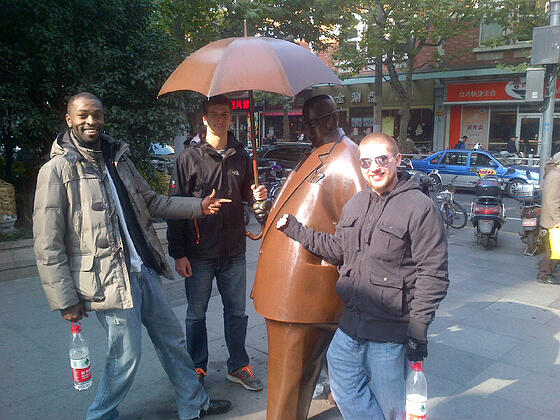 Photo: Michael with other CAPA students in Shanghai Jing An Temple area

CAPA WORLD: Tell us a bit about yourself.
MICHAEL BAPTISTE: I am Michael Baptiste. I’m from Miami, Florida, studying business administration, and I will be graduating from FMU in the spring of 2014.

CW: Did you meet Jarvay Hammonds from our Fall Semester 2012 and, if so, did his experience inspire you to come to China?
MB: Yes, Jarvay was a friend of mine prior to his experience with CAPA in the fall semester of 2012. I had the idea to go study abroad in Italy at first, but then after looking at their economy I began to have second thoughts about making the journey to Europe. Then one day I spoke to Jarvay and he began to tell me about his experiences abroad and how amazing it was for him. Afterwards I started doing my research and realized how fast the Chinese economy was growing and then I decided I would travel to Beijing China to study. 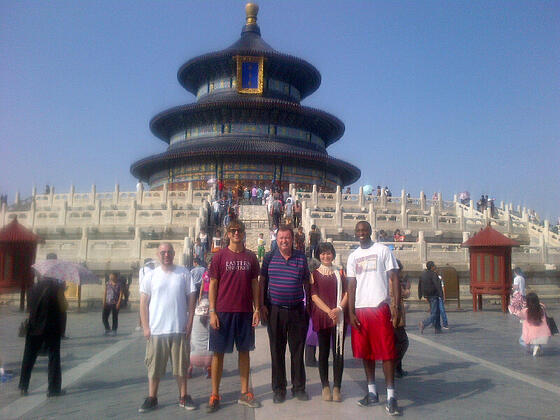 Photo: Michael with other CAPA students, CAPA Director and Assistant in Temple of Heaven

CW: How did you finance your semester in Beijing?
MB: I was able to finance my semester here though loans, financial aid, a scholarship from CAPA, and through donations. I was also able to get my plane ticket sponsored by a company named Innovative Product Solutions LLC.

CW: What courses did you study while in Beijing?
MB: I studied elementary Mandarin while I was in Beijing and picked up quite a bit of the language. The funny thing is that my roommate was actually from Turkey and spoke little to no English whatsoever. So the only way we would communicate was by speaking Chinese to each other. He helped me each day, and before I knew it – I was conversationally fluent in spoken Chinese. I also studied Chinese Economic Development. 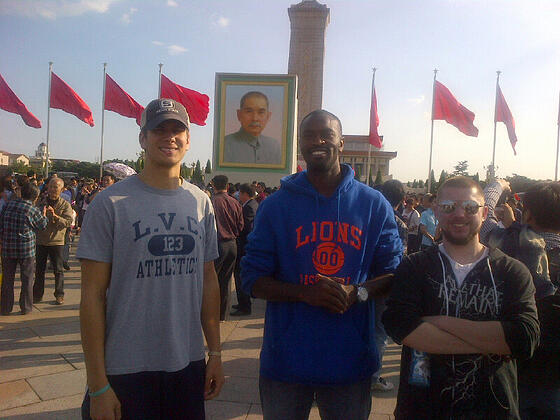 Photo: Michael and other CAPA students in Tiananmen Square on National Day

CW: How was it learning Mandarin from scratch and what advice would you give students starting Mandarin study?
MB: It was really tough and frustrating at first because I could not remember anything and I couldn’t pronounce things correctly. Let alone I couldn’t understand a word the teachers were saying unless they translated into English. It did get easier for me as I began to study more, and speak with my friends around campus in Chinese. For a student starting to study Mandarin, I would recommend that while you study you listen to Chinese music, or let the Chinese television play in the background. It’s a difficult language to learn, and the more you hear it, the more you’ll be able to pick up over time. Plus speaking it every day around Beijing really helped me pick up a lot of the language.

Photo: Michael with locals in National Art Museum in Beijing

CW: Did studying Chinese Economic Development help you to understand China's economic importance and the future challenges?
MB: Yes, it helped a lot. On the west side of the world, we are not really informed much about the Chinese economy so to come over and learn first-hand from a variety of sources was very informative. Those sources included CAPA's Colin Speakman, who was very knowledgeable about the subject, and several other Chinese students and guest professor who were able to give us their opinion and outlooks on the Chinese economy and development. I think with the new leaders and new direction China is heading in now there is tremendous opportunity for growth in the future despite the challenges they face. 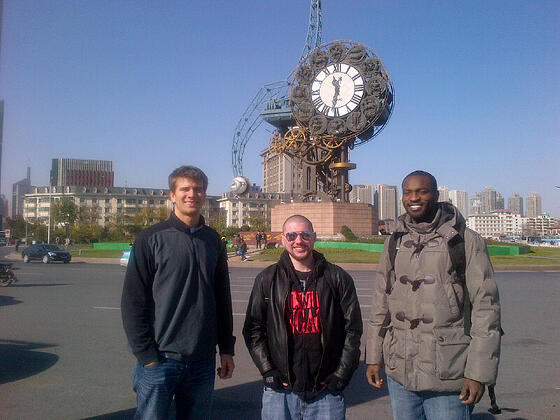 Photo: Michael and other students on CAPA excursion to Tianjin

CW: Did you have the chance to explore Beijing and any other cities in China?
MB: Yes, I had the opportunity to explore so many parts of China that I didn’t know existed thanks to CAPA. Together with CAPA, I traveled to the Great Wall, the Temple of Heaven, the Forbidden City, several museums, the Summer Palace, and the other cities of Tianjin, and Shanghai, the YuYuan garden in Shanghai and so many other places in such a short amount of time. It was truly a remarkable experience. My favorite place to travel to was Beijing’s Sanlitun – which is an area that made me feel like home because of the American and European style atmosphere, restaurants, stores, bars, and clubs.

CW: What was it like living at CNU with many international students?
MB: It was great being able to integrate with so many different cultures at the same time. I was even able learn several words from many different languages such as Mongolian, Italian, Russian, Arabic, Turkish, German, and on top of becoming conversationally fluent in Chinese. I also learned a lot about the Arabic, the Italian, and the Mongolian cultures after making new friends. But living around so many different cultures has opened my mind up to the possibilities of life outside of my American culture. I think it’s an experience that everyone has to have for themselves because it shows you that we live in an international world where people are very similar to each other. I was also able to meet some really close friends who I plan on staying in contact with. 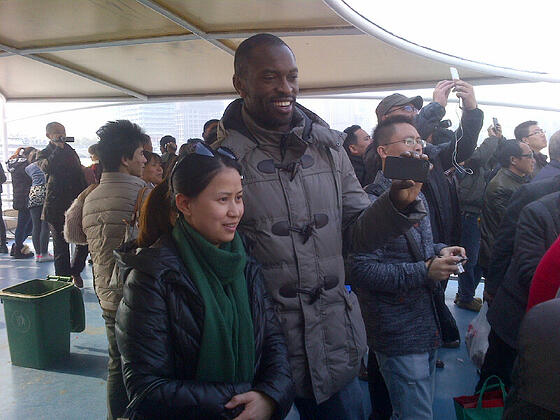 CW: Did you fulfill your dream of meeting local people in Beijing?
MB: Yes I did. I met a few good friends who are now people that I plan to remain in contact with. I met some friends in Beijing who like the same things I do, like reading books, basketball, personal development, and art. The most amazing part was connecting with these people from the other side of the world, and seeing that they were not so different after all.

CW: What will be your best memory of being in China?
MB: My best memory of China was being featured in the Shanghai Daily after only two days of being in Shanghai. There was a picture of me participating in a traffic awareness activity on the sidewalk wearing big safety goggles and walking through large orange cones. We were going sight-seeing around Shanghai when at a bus stop I saw a bunch of people gathered around a set of cones with a guy in the middle walking through those cones. I asked him could I try and walk through the cones next. He said sure, and gave me the goggles then let me walk through the cones, and the next thing you know I’m featured in the Shanghai daily two days later. I thought that was pretty awesome, and I’ll always remember that experience. 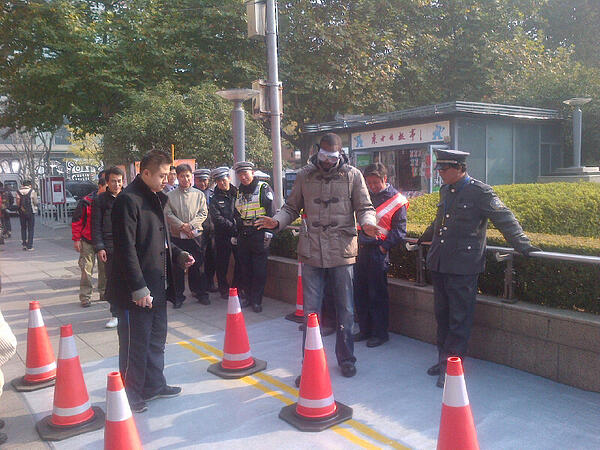 CW: When you are back in USA, how do you plan to build on your experience in China?
MB: I’ve been recording as many of my activities in Beijing as I could. I’ve been taking pictures and recording my entire experience. My plan for when I get back is to take all that I’ve captured on camera and put them together into a documentary. Also when I get back, I will film at my university and then on screen I will compare the differences of studying at a university in China, and at a university in America. I also have some friends from other countries that will be recording and sending me footage of their experience at their universities back home to put into the film.

It will be called “The eExchange Student: A Revolution in Education” and it will be made to inspire thousands or even millions of students around the world to study abroad and experience what Jarvay and I experienced during our studies. I have a big vision to motivate as well as encourage students and young people to get out and explore the world while learning about different cultures in the process. And on a personal level, I will use this experience to continue develop myself into a better person and a more international citizen. Also, I will approach my studies with a more open minded perspective as well as a stronger emphasis on international relations.