Words by Kenny Burr, a Wright State University student who is studying abroad in London this semester with CAPA International Education. Below is his story:

Photo: Kenny on a panoramic bus tour of London

A LITTLE BIT ABOUT ME

I live in New York and go to Wright State University, which is in Dayton, Ohio. This semester is my last one before graduation. I am completing a major in political science and a minor in international studies. Being in London is an awesome way to wrap up college! This is my first trip abroad. It is also the first time that a student from Wright State who is in a wheelchair has studied abroad for a full semester. And, I am the first student at CAPA’s London center in a wheelchair as well. So, I am being a ground-breaker on a number of fronts, which often happens to me because I like to push the envelope. 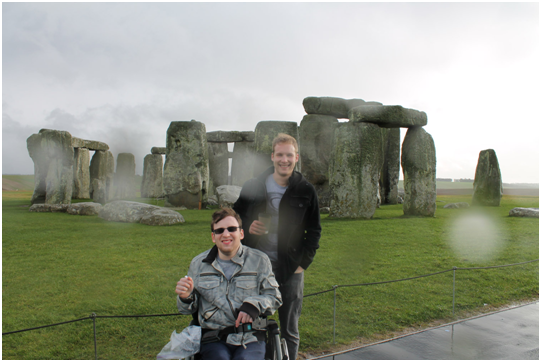 SO MUCH TO SEE, SO LITTLE TIME

I want to go everywhere and see everything! CAPA arranged a coach (bus) panoramic tour of London and that provided a good overview of the city. The incoming class also had cream tea at the Regency Hotel—quite elegant and very tasty, although my wheelchair and I had to be carried up the steps because the hotel lacked an accessible entrance. I've gone on CAPA MyEducation events like walking tours of Primrose Hill and Southbank and trips to the London Transport Museum and the Neasden Temple. CAPA also sponsored a day trip to Stonehenge and Bath. 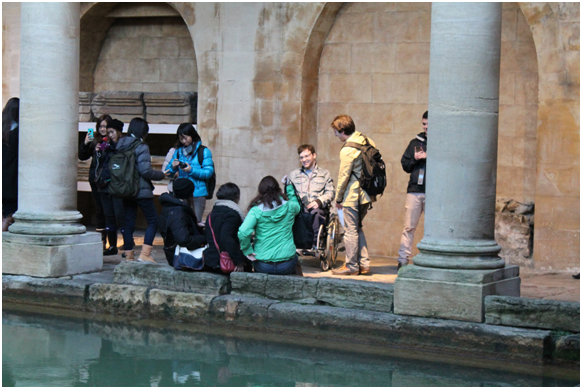 I was able to get around most of these places pretty well in my wheelchair. I have to decide in advance whether to use my heavier motorized chair or a lighter weight one that can, if necessary, be pushed, since many places have a step here or there, or other unpredictable obstacles. I usually travel with a personal assistant (PA) just in case I need help with anything.

The only exception, in terms of the ease of getting around, was the Neasden Temple, a Hindu shrine. I had to take three buses to get there, which made me half an hour late. And the neighborhood didn't have curb cuts on all the streets. But, the temple itself was worth the trip. It is made entirely of marble and was beautiful! There is this wonderful dome which has statues of the five different incarnations of the Hindu spiritual leader. Everyone was very welcoming, although people kept coming up to me and saying things like “I hope you know Vishnu is watching over you” and “I hope you get better.” I realize I have a disability but I don’t feel like I need to “get better.” I just am who I am. It felt weird to be prayed for, although I am kind of used to this. At my school in Ohio sometimes people say similar things. 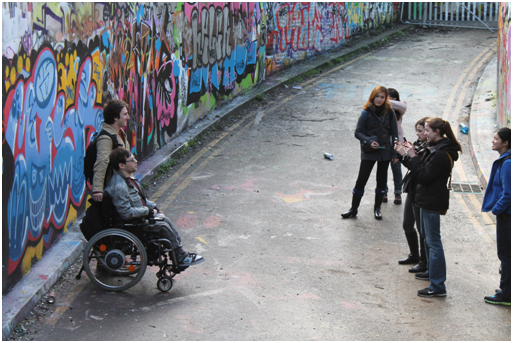 These underground trains are the most efficient way for most people to get around, but not necessarily for me. Most stations are not accessible and sometimes there is even confusion about those that are. I went from the Earl’s Court station to Westminster easily and with help from Transport for London (TFL) Earl's Court employees, who escorted me to the platform, put down a ramp so that I could get on, and then called ahead to Westminster, where a TFL employee was there to meet me with a ramp as I exited the train. Now, the Blackfriars Station is another story…

For one of my classes, I needed to visit the Museum of London, which is near the Blackfriars Tube station. Because I knew the museum would be fully accessible, I decided to use my sturdier wheelchair, which weighs 150 pounds (68 kilos). Big mistake! I had used the Blackfriars station once with my lighter weight chair and recalled that my PA had to push me across the gap between the platform and the train because there didn’t seem to be a ramp. The Earl’s Court TFL employee at the information window assured me that Blackfriars had a ramp, and I took the Tube to Blackfriars. However, when I got there, nobody was around to help me get off the train because BLACKFRIARS HAS NO RAMP. I had to stay on the train and travel until I reached an accessible station, West Ham--ten stops beyond Blackfriars. Since no one knew I was coming, no one came to meet me, and I had to stay on another three tops, to East Ham Station. I wouldn't have been able to get off at that stop either except for the help of a very nice passenger, who alerted the driver about my situation. Colin Marshall, a supervisor at the East Ham station, was very upset about what had happened, and filed a report that will be sent to the head of Transport for London, or maybe even the Mayor’s office. Very cool! Then East Ham TFL staff arranged and paid for an accessible taxi to drive me and my PA to the Museum of London. Thank you, Colin and everyone else at East Ham—I think you all deserve promotions, some days off and bonuses!!

For a course that examines London in the context of being a global city, each student had to do a presentation about a neighborhood. Mine was Soho, which is a really happening place. There is so much going on—music, theater, art, as well as many lively cafes and pubs. There are upscale stores and seedy ones. Soho Square is one of the few places nearby that I saw with grass and trees. The area is really colorful! 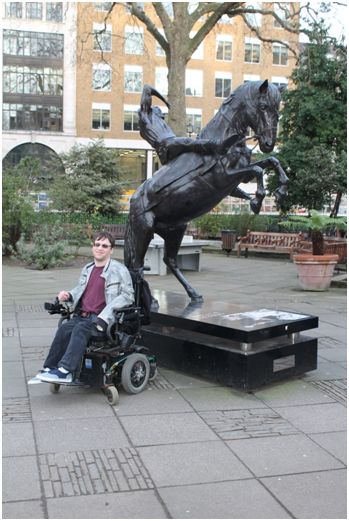