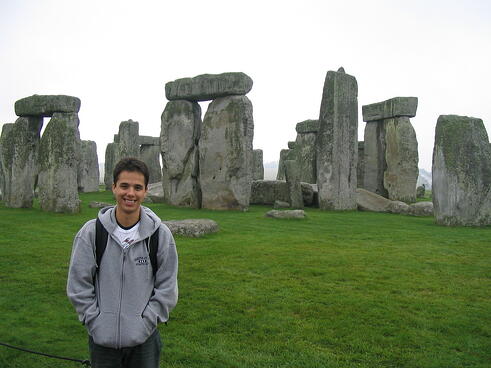 It's almost a decade now since Chris Churma studied abroad in London with CAPA International Education. In the years that followed, the study abroad field stayed an integral part of his life and he is now an Education Abroad Coordinator at Colorado State University, advising each new class of students who are considering a study abroad program. Below he talks about the importance of his internship in London, the fact that limited finances abroad actually turned out to have a positive impact in some ways and how he dealt with the challenges of returning home. 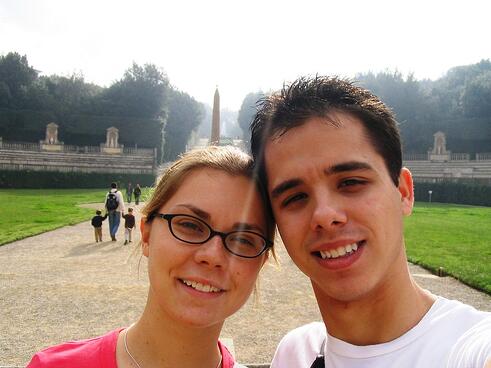 CAPA WORLD: Where and when did you study abroad with CAPA?
CHRIS CHURMA: I studied abroad in London in the fall of 2004.

CW: Why did you decide to study abroad? Was it a good decision?
CC: I can remember as a grade school student that I always loved the idea of other places. I loved learning about them, but never thought I'd get the chance to travel abroad, yet alone spend several months abroad. When I was in high school, my grandparents took me to Slovakia and the Czech Republic where we have family. I was bitten by the travel bug and knew I wanted to go abroad again. Studying abroad just made sense. Deciding was the easy part; making it a reality was a bit of a challenge - how to afford it, would it work for my academics, how would I do being away from home that long, etc. Suffice it to say, it wasn't just a good decision; it was a great decision! The process of going abroad may have been a bit overwhelming, but in the end everything just fell into place. It was like it was meant to be!

CW: Did you complete an internship as part of your program? If so, what was your experience like?
CC: I did do an internship, and it really was the highlight of my experience in London. I studied marketing while at the University of Pittsburgh, and as a business student we could easily get internship credit. It worked out perfectly that the CAPA offered internships, and they made it easy to get a placement based on our areas of interest. I interned for a technology publication firm in London's Soho neighborhood as part of their market research division. One of the best parts of having an internship was having a routine on the days I went to the office. I commuted on the Tube during the morning and evening rush hour. I felt like a local. I didn't feel like I was just there for school. There was something about being dressed in business clothes, jammed in the Tube and reading the daily newspaper over someone's shoulder. 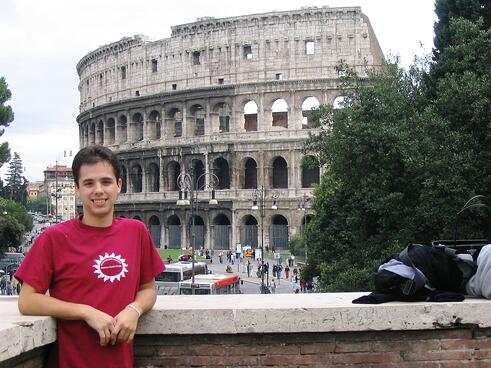 CW: What have you been up to since you finished your study abroad program?
CC: It's hard to believe, but I am coming up on my ten year study abroad anniversary this fall! My study abroad experience truly did shape the rest of my education and my career. I returned to Pitt and graduated in 2005, but made sure to pick-up an international business certificate. Since graduation, I have worked in the study abroad field helping other students make their dreams of studying abroad a reality. Along the way, I decided that I should go to graduate school, and I ended up at the University of Minnesota studying international education and exchange. One of the greatest things about moving to Minnesota was that while in London many of the students on the program were from the UMN, and one of my closest friends that I met in London lived in Minneapolis. Today, I am an Education Abroad Coordinator at Colorado State University. Getting to talk about study abroad and reliving my experiences daily makes for a great work day! I've also had the opportunity to keep traveling. To date, I've been to 43 countries, and I firmly believe you should always visit more countries than your age. I got a 12 year buffer right now, but I don't plan on waiting that long to visit my next new place! 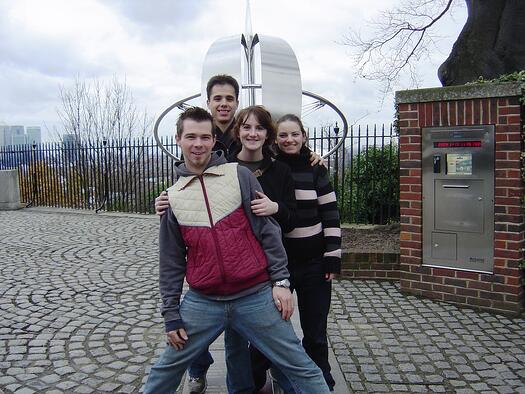 CW: Do you feel that your study abroad experience had an influence on where you are in your life today?
CC: Hands down, yes! As I already mentioned, my experiences abroad changed my whole career approach, but it did more than just that. It changed my whole approach on life. I think one of the best things anyone can do, not just college students, is experience another culture. It has made me a more open-minded individual and allowed me to truly appreciate the differences among people. It also allowed me to discover myself and what I am capable of doing. I gained a sense of confidence that I don't know I ever would have gotten had I followed the "traditional" path in college. My study abroad experience also made me more aware of world affairs and how interconnected we all are.

CW: Do you remember your first impression of London? How did it change by the time you went home? Why do you think that is?
CC: My initial impression was arriving in Heathrow and instantly feeling overwhelmed. Here I am jet-lagged, in one of the world's busiest airports, and needing to find a group of equally excited and terrified college students looking for shuttle bus to our flats. Once I found the group and was dropped in our new home (which was in London's Knightsbridge neighborhood - home to Harrod's and steps away from Hyde Park - it couldn't have been a better location!), I was in love. London initially felt immensely large, and so foreign. By the end of the semester, though, it felt like home. It no longer felt large, but navigable and familiar. It truly has set the bar for me in terms of great cities. If given the chance, I would live in London today without a second thought.

CW: What advice would you offer students currently on a study abroad program or considering one?
CC: I deal with this question on a daily basis, and there is really one simple answer: Do it. The best advice I have beyond that is to fully immerse yourself in the experience abroad. Ten years ago Facebook just started (I joined while in London and thought it was the most ridiculous thing ever at the time), and cell phones were simply just phones. It was more easy for us to disconnect from the digital world and experience the real world that surrounded us. Looking back, however, one of my regrets is still not fully immersing myself in the local culture. Our classes were at a study center with the other students on the program, so I didn't get to meet many local students. If I could do it again, I would have done a better job at getting to know locals and creating those lasting friendships. The experience also goes by way too quickly so absorb every moment of it to the fullest.

CW: Share a memory of an interaction you had while abroad that has stuck with you over time and why it was so memorable.
CC: A memory that has stuck with me all these years involves my internship. I interned three days a week, and I sat next to a British women. Every time I came into the office she would look at me and say, "Are you alright?". I initially would answer the question with a simple, "Yeah...". By the midpoint of the semester I was convinced she thought there must be something wrong with me, but I had no idea what she thought that could be. I'm sure at that point my quick "yeah" or "I'm ok" began to have a hint of irritation. I later caught on that asking, "Are you alright" is just the British way of asking, "How are you?". I truly felt like an idiot. Its made for a great story to laugh at today, and during the pre-departure orientation we hold for our students at CSU, I tell this story. Its a great example of how you may be in an English-speaking country, but you still may speak a completely different language. 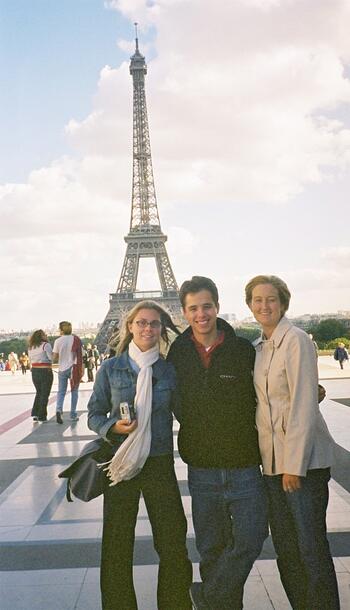 CW: What were your biggest challenges abroad? Your greatest rewards?
CC: While there are certainly cultural differences between the US and the UK, I took comfort in the familiarity between the two countries. That allowed for the transition of living abroad to be more smooth than others might have in a non-traditional study abroad destination. However, one of the biggest challenges I faced was the cost of living. I never really considered the cost it would take to live in London. In college, I was on financial aid and loans, so being financially responsible was critical for me. London is one of the most expensive cities, and I definitely felt it. In 2004, £1 GBP was approximately $2 USD, so we were literally paying double for everything. A lot of students who study in Europe, myself included, think they are going to travel all over the continent. You quickly realize how unrealistic that is, particularly when costs are involved. The upside to being financially forced to stay local was that I got to know London very well. We had three-day weekends on our program, and a lot of students would head out of town every weekend. I didn't, and its one of the best things I could have done looking back. And London on a budget is completely possible - there are tons of free museums and things to see and do!

CW: What did it feel like to return home and adjust to life in the US again? How did your friends and family react to your stories? Did you experience any reverse culture shock?
CC: Returning home was hard. It ended up that one of my close friends from the program and I were on the same flight from London to Chicago, so it felt like we were just going on a trip together. That moment when we went to our separate gates for our connecting flights was rough. I went to London alone, and then months later I was standing on my home soil feeling more alone than when I first started the program. I felt empty. It was great to be back among family and friends, but how could I possibly explain the last five months of my life? They were certainly interested in my stories and pictures, but not nearly for as long as I would want to talk about them. Coming home is a lot like going to your study abroad location. You have to learn how to integrate yourself into a way a life that seems so very different. I tell my students today to prepare as best they can for the return home, and that they are going to come home a square trying to fit into a circle. You just don't fit in, and that can be really hard. It was really great for me to have several friends from the program who also went to Pitt. We were able to lean on each other when we felt like no one got us.