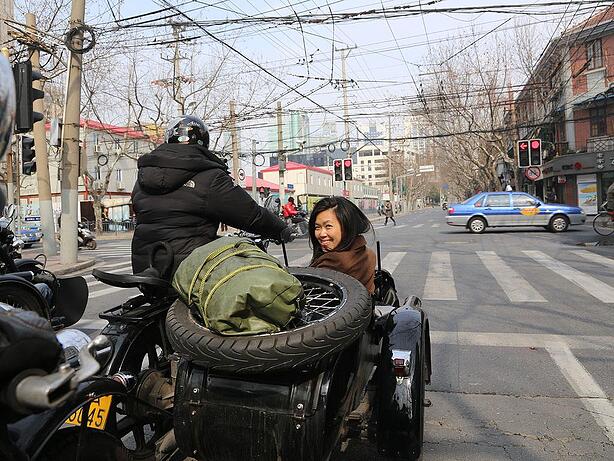 On our quest to introduce some of the locals in CAPA International Education’s global city destinations, we look to Shanghai where we meet Sue Anne Tay. Originally from Singapore, Sue Anne, a serial expat, has lived in Shanghai for about six years now. Two years after she arrived, she began writing a beautiful blog called Shanghai Street Stories in which she uses photography and storytelling to document the life around her. Below she shares some of her images and talks about her blog, the rapid urban development of Shanghai and meeting "the happiest man" in the city. 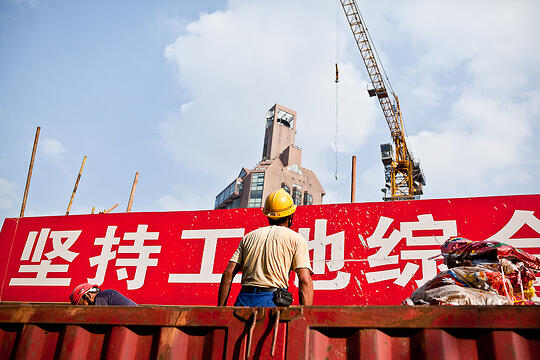 Photo: Building Shanghai: The backbone of Shanghai’s frenzied construction are migrant workers from neighboring provinces.
Story: “Toiling in the heatwave: whither thy subsidy?”

CAPA WORLD: Where are you from originally, how long have you lived in Shanghai and what brought you there?
SUE ANNE TAY: I was born and raised in Singapore. I moved around for university/ graduate school and eventually work for over a decade - Los Angeles, London, Moscow, Washington DC, Hong Kong and New York. In 2008, I moved to Shanghai for work. It felt great to be back in Asia. 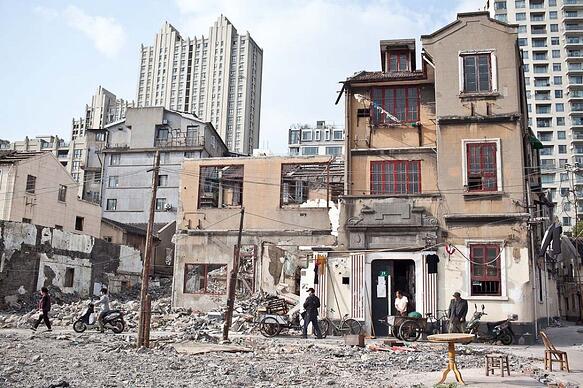 Photo: Half demolished public housing in Shanghai: A neighborhood on its last leg. It was one of many shikumen neighborhoods lost in 2013.
Story: “Shanghai’s lost shikumen and villas in 2013”

CW: You run a blog called Shanghai Street Stories. Tell us a bit about your site, why you started it and what sort of content you include.
SAT: For almost five years, I've been photographing the city's diverse heritage architecture and writing stories about disappearing community lifestyle in old neighborhoods. Combining photography, local anecdotes and research, I piece together the history and social landscape of Shanghai’s old villas and shikumen (stone hedge door) lilongs (lane) neighborhoods.

I didn't know anyone when I first moved to Shanghai, so I would walk for hours across the city with my camera on the weekends. Talking with residents, I discovered a wealth of stories – from the quotidian to dark, and began writing about them. I taught myself to photograph better and did more research to lend more context to the stories. I've also met incredibly talented documenters capturing similar aspects of Shanghai, whom I've interviewed for the blog. 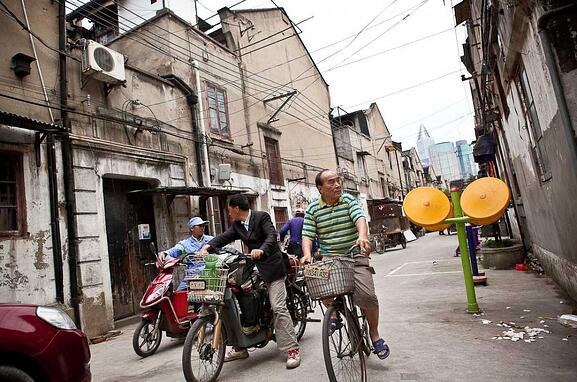 CW: What surprised you most about Shanghai when you first arrived?
SAT: I would say I was less surprised but more struck by the income gap that, while pervasive across China, is distilled in a very stark manner in Shanghai. In developed cities, you often have affluent and poorer areas more clearly segregated but in parts of downtown Shanghai, the lower middle classes and rich are co-existing spatially because the city is still urbanizing. Traditional neighborhoods filled with old Shanghainese and migrant workers sit next to luxury condos; the rich and poor may shop for groceries at the same wet market; the domestic help live together with wealthy families; construction workers sleep in temporary sheds below emerging skyscrapers. Visually, this is very powerful. 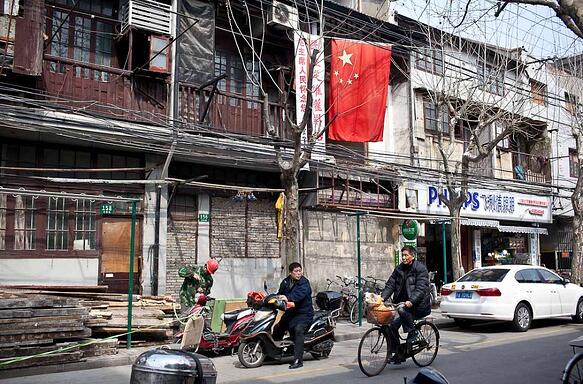 Photo: Protesting nail house: Banners calling for justice by a resident of a nailhouse, protesting against the demolition of the neighborhood.
Story: “Left behind, Shanghai’s older generation hark back to Chairman Mao” (for the Guardian)

CW: Shanghai's rapid urban development is one of your interests. What are some of the negative and positive effects this is having on the city?
SAT: Being one of the first Chinese cities to open up, Shanghai has developed a comprehensive transportation system, (the metro system - built in 1993, which is now the longest in the world), created millions of modern housing units, updated schools and hospital infrastructure, and fostered a cosmopolitan environment that has attracted people and businesses to settle here as opposed to other cities in China. You can’t help but be impressed by what the city has achieved in a short few decades.

But if we look past the fact that the city has built over 400 skyscrapers since the 1990s, we have to question if Shanghai’s urbanization is human oriented. The World Bank highlighted in a recent report (pg 45) that Shanghai’s new urban developments are less connected and the average distance between intersections three to five times longer than the new urban projects in Paris, Tokyo and Barcelona. We see larger malls, bigger parking lots, wider highways in the center of Shanghai that accommodates larger consumer habits but less community spaces. 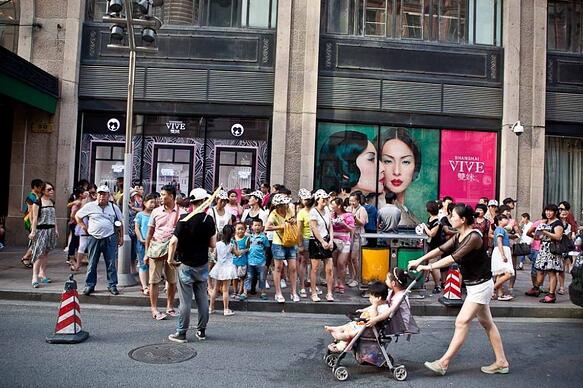 Photo: Shanghai Shopping: Chinese tour groups gather in front of the Peace Hotel near the Bund
Story: “The Chinese tourist in Shanghai”

CW: Tell us about one memorable encounter that you've had while creating content for Shanghai Street Stories. Why did it stand out for you?
SAT: I met Mr. Cai, whom I later referred to as “The Happiest Man in Shanghai”. This was in the outskirts of the city where factories had, over the decades, taken over the farmland that used to exist. The Cai family lived in the only traditional house left standing when a developer cleared the village to make way for office space. The project was stalled due to the lack of funding, so old residents returned and built an urban farm in the fallowed space.

I spent an afternoon with Mr. Cai who was positively brimming with happiness about his vegetable patch, his wife who sewed his clothes from the cotton they grew, his granddaughter whom he walks home from school, a little barber shop he keeps as a hobby that looked like a Wonder Emporium. He was such a breath of fresh air from the constant stress and cynicism you encounter in the city. 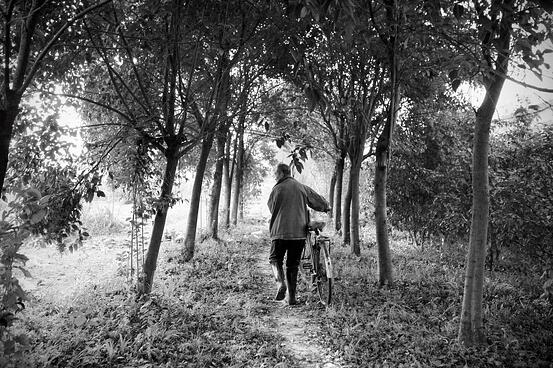 CW: How do the living and working environments in Shanghai differ from what you experienced in other places?
SAT: Shanghai sits in the middle of developed and developing cities I have lived in. It has impressive infrastructure or "hardware" that foreigners praise China for. But there is still a gap between the "hardware" and "software"- attention to detail, the lack of patience, hygiene and care for public space, etc. This is a common observation of China. But in Shanghai, this gap has slowly narrowed in terms of attitudes, expectations and quality of services and products over the years. 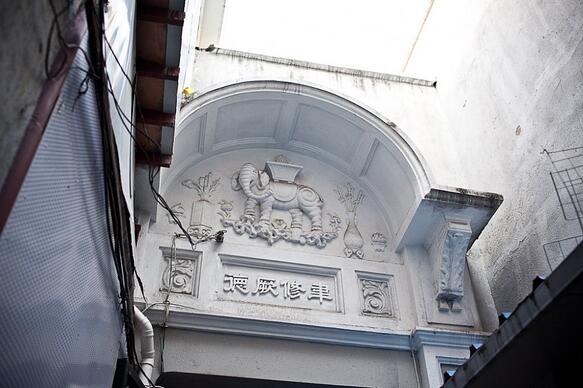 Photo: White Elephant Shikumen Header: Finding and deciphering the meaning of a shikumen in Old Town Shanghai.
Story: “Take me to the white elephant”

CW: When you think of Shanghai, what comes to mind when you hear the following:
SAT:
Sight - The city is an explosion of color and characters. Blazingly bright LED screens, constant construction and fast moving people and vehicles.
Smell - Walking through an old neighborhood lane, there are savory smells of meals being prepared, sweet scents of flowers in someone's porch, freshly laundered clothes hung out to dry, trash from the nearby dump site, urine from the public toilets.
Sound - Cacophonous. People talking loudly which is normal, honking vehicles, the screech of rails of the metro train and that rumbling of people’s throat right before they spit.
Taste - Food? Regional cuisines that make your taste buds sing. You eat like a king in Shanghai on any budget. Air? Sometimes, on really bad days, you can taste the pollution in your mouth. 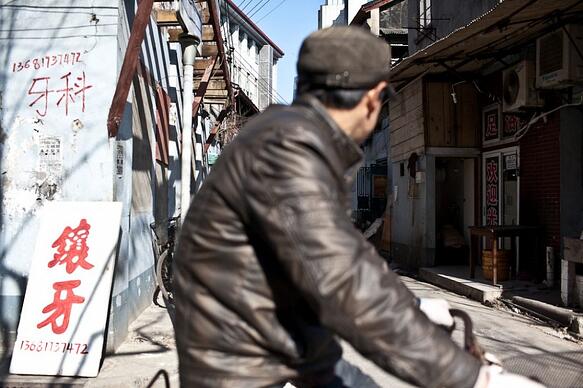 Photo: Cyclist in alley: An alley no more. A cyclist passing through one of the many lanes in Old Town Shanghai that has since been demolished.

CW: Share a few recommendations on where to eat in Shanghai on a student budget.
SAT: It won’t take very long for any young foreign student to get plugged in with popular Chinese apps – WeChat (if you want to connect with local friends), Dididacha (booking cabs) and Dianping (a food app). Dianping is great for finding popular Chinese restaurants, which are still very affordable and delicious.

Vegetables are fresh and cheap in China, hardly an excuse not to put together a homemade salad. For herbs like basil and mint, you can buy them cheaply from the affectionately termed “Avocado Lady” who caters largely to Western shoppers. 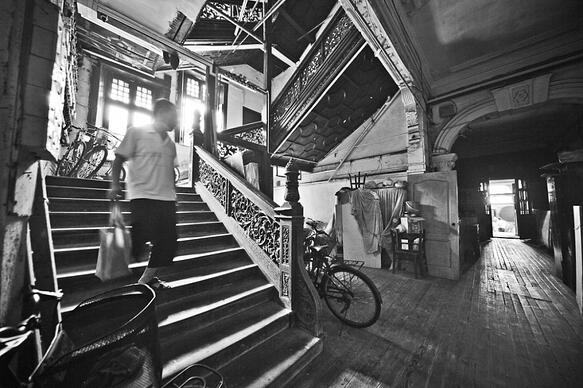 Photo: History of a Shanghai Villa: The former residence of a Mandarin diplomat Wu Tingfang had also been a British boarding house and later the dormitory for factory workers of torchlight manufacturing company.
Story: “The Elegant History of Shanghai’s Rundown Communal Villas” (for The Atlantic)

CW: Which neighborhood in Shanghai do you spend the most time in? What do you like about it? Share a few of your favorite places there.
SAT: Friends mostly gather for drinks and dinner in the former French Concession and Jingan area; it’s a preference for many expats. But if I'm on my own, my favorite haunts are more traditional neighborhoods around select parts of Hongkou district or Old Town (where the old city wall used to be). I recommend anyone to visit Lu Xun Park (set to re-open by August). Each evening, hundreds of local residents gather to sing, dance and chat. It's that sense of community that helps them cope with the rapid pace of modernization in the city. 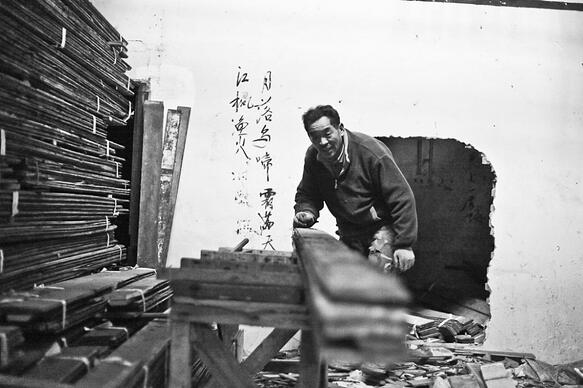 CW: What is your favorite Shanghai discovery? What's special about it?
SAT: It’s hard to pick favorites. Whether it is a beautiful shikumen villa, an evocative tale told by a resident, an old map or photograph - when they align to connect the past and present, it’s magical. 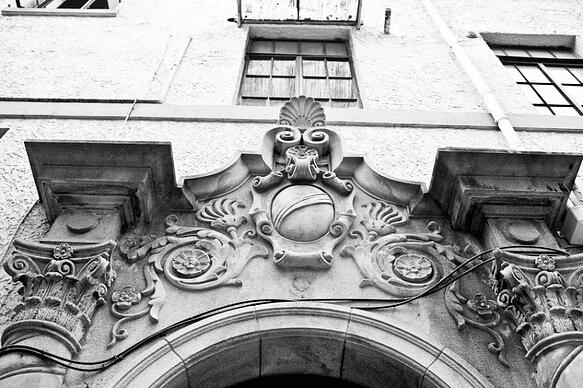