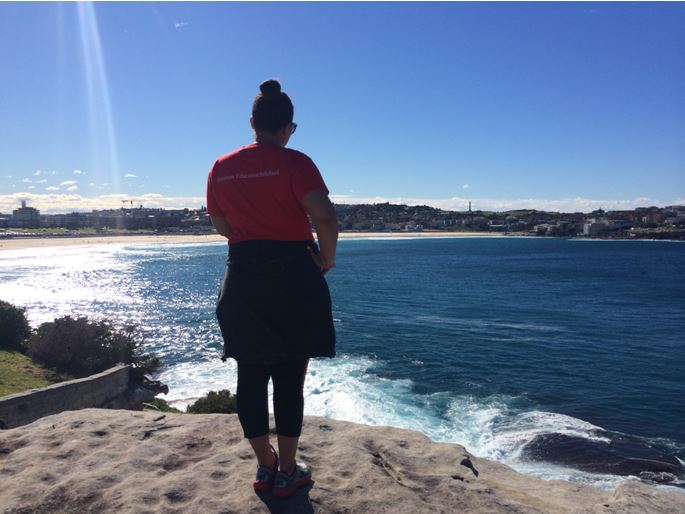 The excitement Natasha has for her study abroad experience over the Summer shines through in her interview answers below. She talks about the surf school on Manly Beach, the Latino community in Sydney and learning to eat vegemite properly. Long walks along the coast and MyEducation events were a favorite part of her time in Sydney and she also tells us some of the ways she was able to connect the academics to the global city around her.

CAPA WORLD: Tell us a bit about yourself.
NATASHA NÚÑEZ: I had the amazing opportunity to study in Sydney, Australia during the Summer I term in 2014. I’m now a senior at Northeastern University with a major in International Affairs and minors in Business and Social Entrepreneurship and I enjoy volunteering, dancing, fashion, martial arts (although I haven’t practiced in a while) and traveling, of course! 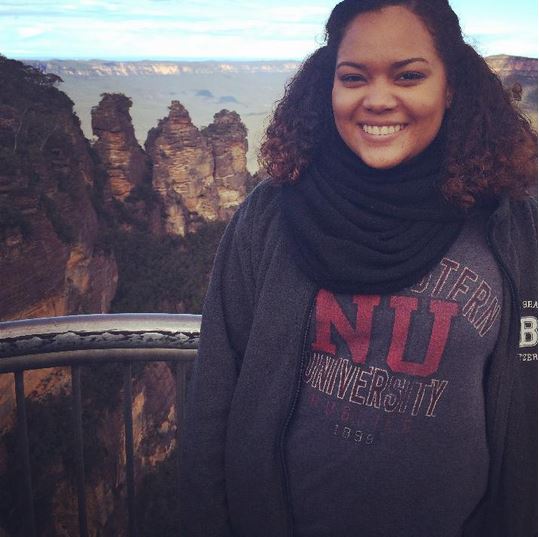 CW: Define MyEducation in your own words. Which MyEducation event was most memorable for you and why? How did your participation in this event change your understanding of the city?
NN: MyEducation is an opportunity to move from what I like to call the “Tourist Phase” to the “Traveler Phase.” These events allow you to learn about the city or country you’re in through unique experiences, as was the case with all of our MyEducation events! I can’t necessarily pick a favorite, but I will say that I absolutely loved the markets in Sydney. This is not something to miss! Markets in Sydney, such as Eveleigh, Paddington, Paddy’s, and The Rocks, are all really unique markets where you can find a lot of local products and souvenirs. I really loved being able to talk to many of the vendors in the markets, ask them about their experience in Sydney and if they like the city or not (pretty much everyone told me they LOVED Sydney!). I also enjoyed getting out of the city and going to the Blue Mountains with CAPA, which showed me a completely different perspective of Australia and its diverse environment. 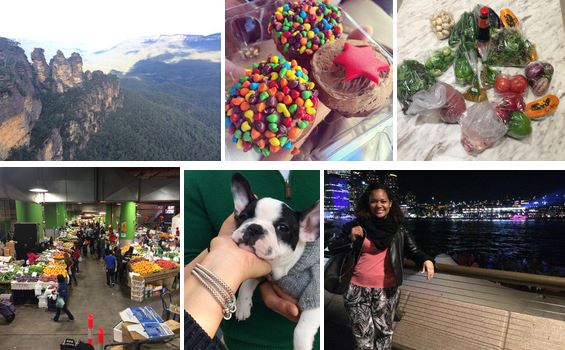 Photos from left to right and top to bottom: Blue Mountains, Cupcakes at Eveleigh Market, Paddy’s Market fruits and vegetables, Paddy’s Market, the Most Adorable Dog Ever in Paddington Market, and Natasha at Vivid Sydney

CW: What was it like to celebrate your birthday abroad?
NN: Celebrating my birthday abroad was exciting, although I did feel a bit homesick, especially since most of the CAPA group was at Cairns for the weekend and I had decided to stay in Sydney (I definitely recommend Cairns, as I heard some amazing things about the trip and I definitely plan to visit Australia again soon). I obviously missed my family and close friends, but I decided to grab some delicious dinner the night before my birthday with some awesome friends from the CAPA group and we hit some local bars and had some laughs. My friend and I had purchased a Groupon voucher to go surfing at the Manly Surf School the next day and it was the best surfing lesson ever! We also visited a great local burger joint, since we got a coupon for free french fries (called ‘chips’ in Australia) at the surf school. Back home in Dominican Republic, I don’t usually engage in such adventurous activities such as surfing, which made this birthday celebration quite different and unique from any other. 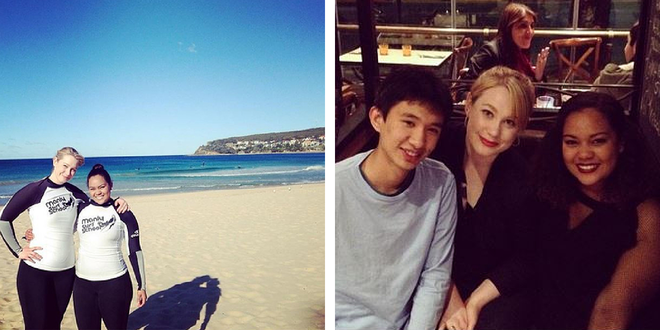 Photos left to right: Natasha and her roommate surfing at Manly Beach and Natasha with friends at Franco Franco

CW: As a minority student from a Latina background, did this in any way effect your experience abroad? Did you find Sydney to be diverse as a global city? Did you discover any Latino gems during your time in the city?
NN: Coming from a Latina background and being a minority actually did affect my experience abroad, since I made a big effort to gage the diversity of the city from day one and was on the lookout for any Latino communities, spots, and tourists. I found all three, although not many! Sydney is very diverse, but I think it’s still growing and developing as a global city. One of my last days in Sydney, I decided to grab a burrito at a Mexican chain called Mad Mex and asked the cashier if the Latino/Hispanic community was large in Sydney and she responded with a resounding “SÍ, CLARO!” (“YES, OF COURSE!”). She explained that there were a lot of events for Latinos around the city (mostly involving dancing!). A simple Google search helped me out with that and I found some places to go dancing, although I didn’t have time to do so. There are also meet-ups that happen weekly and monthly on www.meetup.com for Latinos and Spanish speakers. I did find a good Cuban restaurant called Coco Cubano in Darlinghurst and had some Mexican food my second day in Sydney at Had to Happen Mexican in the Central Business District (CBD). 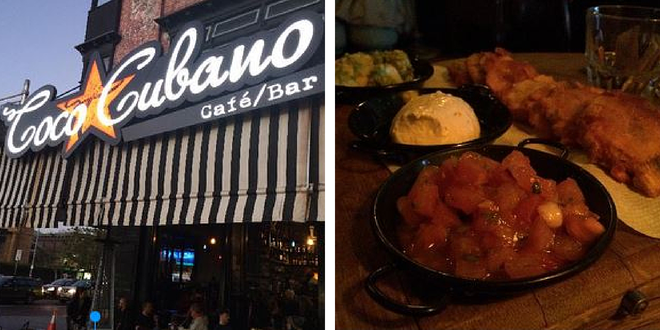 Photos from left to right: Coco Cubano and its delicious food (tostones – or fried plantains – with different sauces)!

CW: Can you think of a typical myth about study abroad that you feel you can debunk for other students after spending a Summer in Sydney?
NN: Spiders or snakes won’t kill you unless you are in the deep bush/outback all alone and are looking for it, vegemite really is a staple food in Australia and you’ll learn how to it eat properly, and the Manly Shark video was fake (or that’s what I heard at least – some friends of mine went cliff-diving at the same exact spot and they were fine!). Apart from that…Sydney will seem very expensive at first, but then you’ll realize that it isn’t that ridiculously expensive, especially when you see it in relative terms. Minimum wage is much higher in Sydney than in many other places around the world, so products and the like are priced higher as well. If you’re buying imported items, it’ll most likely be more expensive than local items.

CW: Give a few examples of ways in which you were able to tie the knowledge you’ve gained in your CAPA classes into the way you understand your host city.
NN: I was pleasantly surprised to see that I was able to apply a lot of the knowledge I learned in the classroom to everyday life in Sydney. More specifically, I was able to learn a lot about Aboriginals’ culture and history in our Global Cities course, which I was able to tie into MyEducation trips such as the Blue Mountains trip, where we learned how Aboriginals survived in the country. Through this, I was also able to have a better understanding of different cultural events in Sydney, such as National Reconciliation Week, which I was able to experience during my first week in Sydney. 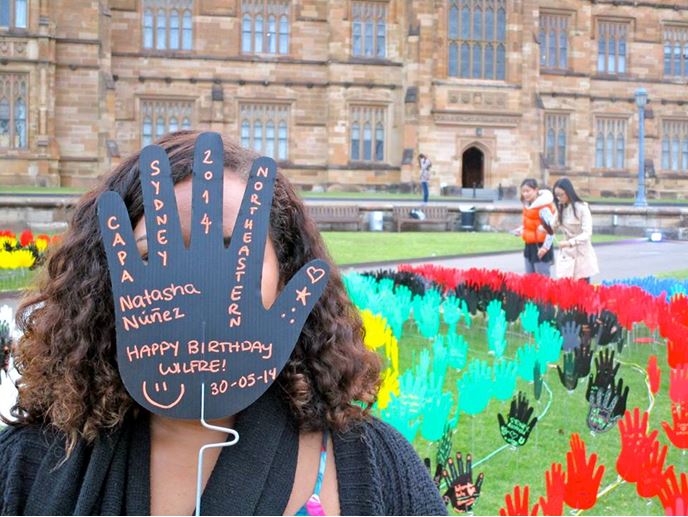 Some other facts that I learned about Sydney through my Global Cities course were how the gentrification of certain areas in Sydney occurred as well as how Sydney developed as a gay destination through its Mardi Gras, which is one of the largest festivals in the world and is economically important for the city as well. Going through some neighborhoods in Sydney, such as Darlinghurst, really helped me understand why Sydney is considered Australia’s gay capital. 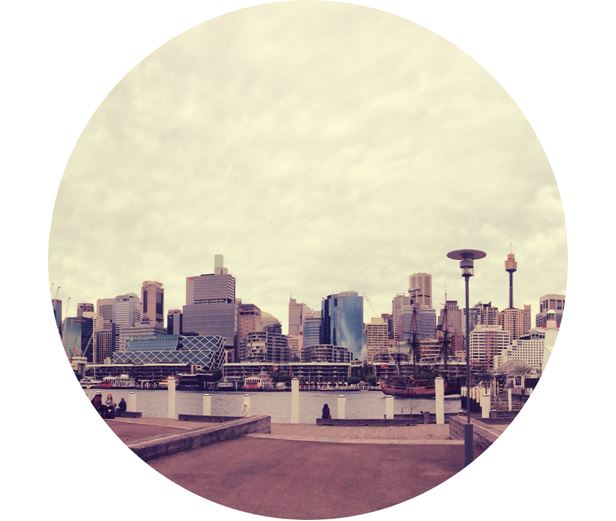 Last, but not least, through my course in Australian Government and Politics, I was able to understand how Australian politics works, which was helpful when visiting Canberra, Australia’s capital. I also got to see how much Australians know about politics through conversations with locals (tip: know your politics before mentioning them in the first place!). 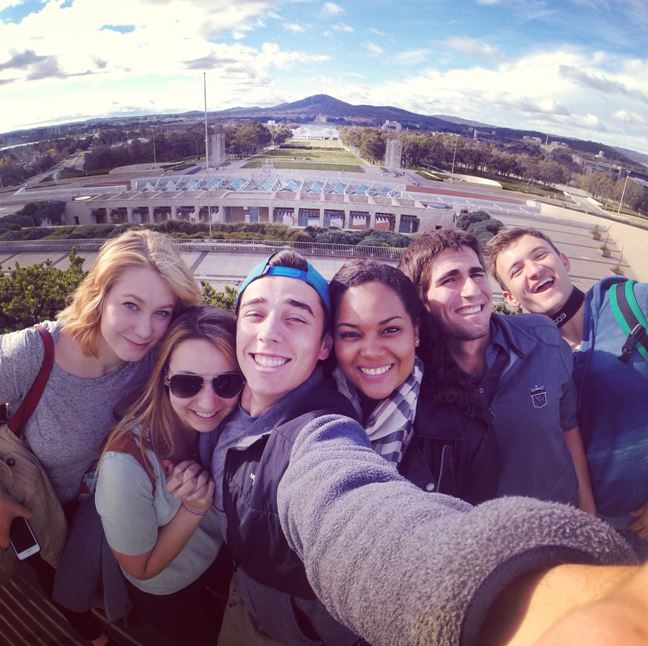 Photo: CAPA friends at Canberra, Australia (props to Nathan Conway for the picture)

CW: Tell us about some of the traditional foods in Sydney and the current culinary landscape that takes hints from nearby countries.
NN: If you’re looking for traditional food, then emu, kangaroo, and crocodile are some unique Australian meats that you may not be able to try elsewhere. Meat pies are also very popular and really delicious. You’ll also learn how to eat Vegemite properly, although it may be quite shocking the first time you taste it on its own! And my absolute favorite treats are Tim Tams – you will soon be a pro at the Tim Tam Slam, and you’ll be addicted. I brought at least four boxes of these with me and wish I had brought more. As to the current culinary landscape, you will find pretty much anything you’re looking for, whether it’s Chinese food, Indian, Turkish, Japanese, American, Cuban, Jamaican, Italian, etc. 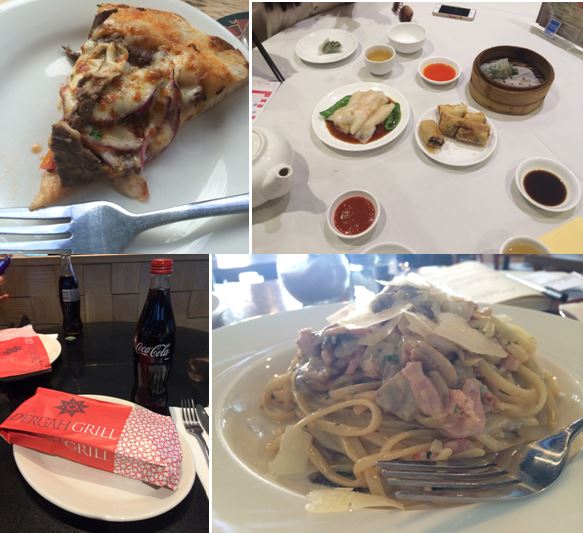 Photos from left to right and top to bottom: Kangaroo pizza at the Australian Hotel, Chinese food in Sydney’s Chinatown, Kebab in Sydney, and Italian food!

CW: What were the three best places you’ve enjoyed a meal? What was memorable about them?
NN: This is a tough one, and I may be forgetting some other places, but I’ll mention some of my memorable meals here:

1. Franco Franco: Wins the prize for best service and best Italian food! It’s located in Surry Hills and has the nicest owner ever! Their food is delicious and their staff, especially the owner, are delightful! Also, make sure to arrive early (before 9pm at least!). 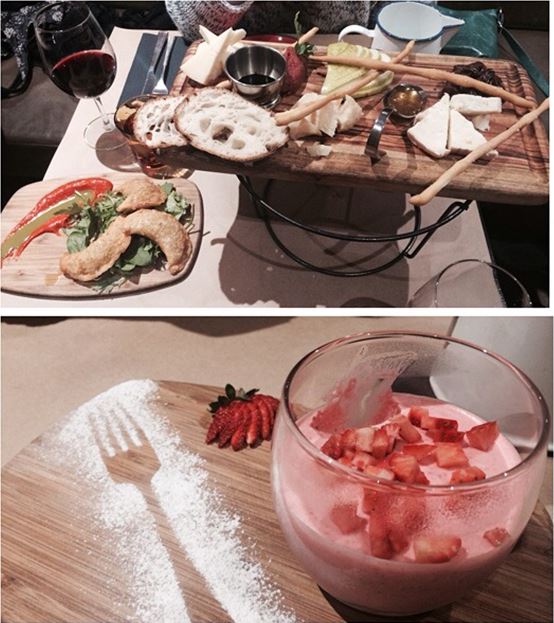 2. Mary’s: Located in Newtown, this small and loud bar will surprise you with its delicious burgers! I was lucky enough to get a free meal here, since they messed our order up and had us waiting for a little while, so the burgers tasted that much better.

3. Ampersand: Wins the “Best Breakie Spot” award! The one I went to was located in Paddington, but they also have a location in Surry Hills. This is a three-level bookstore and breakfast spot with great wi-fi and the best coffee and breakfast ever! They also have a large selection of books for sale, from $1 up. 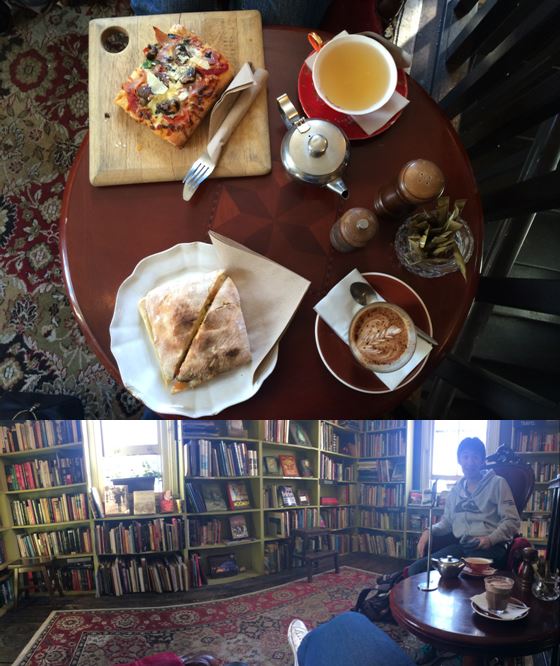 CW: Tell us a story of a memorable interaction you had with a local and why it left an impression on you.
NN: The best interactions I had with locals were probably those impromptu ones in stores, on the street, and in bars! I couldn’t believe how incredibly nice and helpful people were in Sydney. After speaking for a few seconds, I’d always get the question “O.M.G. are you American?! Whereabouts are you from?!” and the conversation would just keep flowing after that. I don’t believe I ever had one negative interaction with anyone in Sydney or Australia for that matter, and this made my trip that much more memorable! 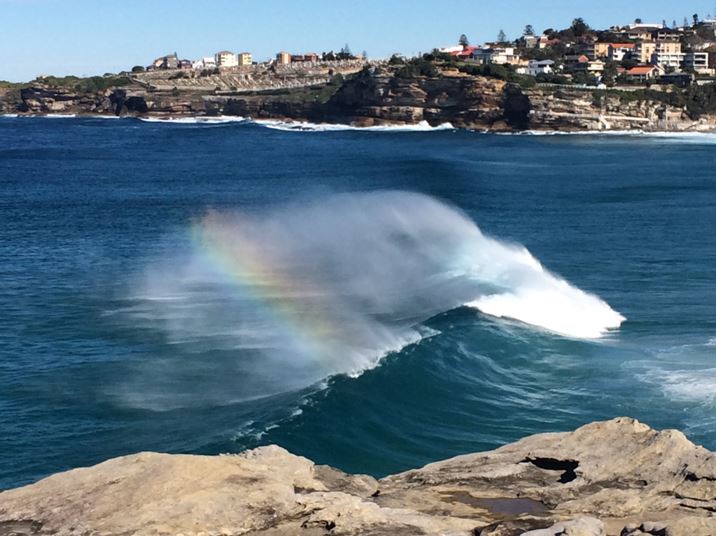 CW: Share your favorite Sydney discovery, the best “hidden gem” and what was special about it.
NN: I’d say my favorite Sydney discovery is not necessarily a “hidden gem,” but more of a MUST-DO! I love nature and I love the ocean, so doing the coastal walks was one of the most beautiful experiences I had while in Australia. During my last week in Sydney I decided to take up the challenge to walk from Bondi Beach to Maroubra Beach, which took my friend and I about four hours to do (photo ops and coffee stops included!). There are also some really great workout stations, baths, and yoga spots along the way, so it’s an activity that can take up the whole day. I wish I could do this every weekend of my life!