In this week's post, Danielle shares her first impressions on arriving in Shanghai and five observations from her first few days in the city.

After a canceled flight, plane delays, an 18-hour flight, and a 30-minute taxi ride, I finally arrive at East China Normal University – my home for the next three and a half months.

Once getting out of the taxi, the driver pointed to a building indicating the location of the dorm, but it was not the right one. Two hints that gave it away were a plaque specifying that it is an NYU building and the building looked vacant. Not only am I unfamiliar with the campus, I cannot speak or understand the language.

With a luggage in each hand, a backpack on my back, and my purse hanging off my arm, I made my way past a street full of sport courts to reach the dorms. Heading into the lobby, I met the program director and the other students in the program.

After introductions and welcoming information, I received my room card and headed up to my dorm. From the description I received before getting here, it said the dorm rooms are smaller than what we are use to. That was not the case; the room is bigger than the ones in the United States. A major difference is the beds. Dorm beds in the US are twin XL. Here, the beds are full-sized. In a way, the room looks like a hotel room. 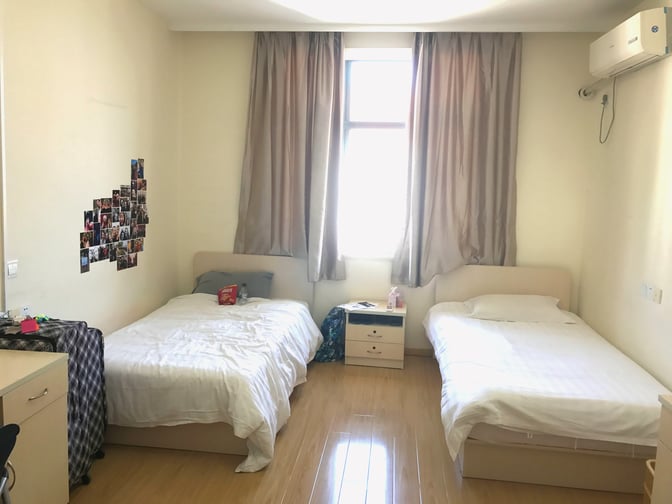 Another difference is the slot to put the card in order for the electricity to turn on. Overall, the room is nicer than any other dorms I have seen; it is perfect for the semester. 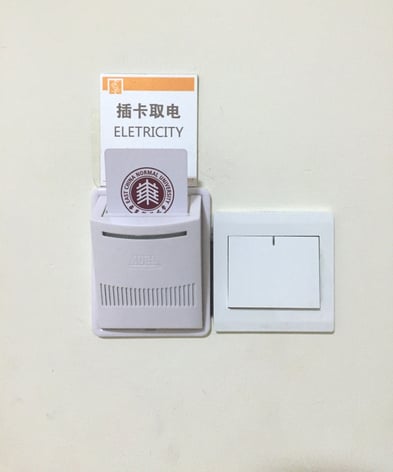 Here are five observations from my very first day here:

1. THERE IS NO UNSPOKEN RULE ABOUT WHICH SIDE OF THE STREET TO WALK ON. The sidewalks are chaotic. Not only do people walk on the sidewalks, but people who ride scooters and bicycles also use the same sidewalks. In the Untied States, people tend to stay on the right side. In Shanghai, people are everywhere and coming in all directions. Being used to the American way of things I went around dodging people coming from the other direction, which lead to having to avoiding more people. In the few short days of being here, I have learned to act the way they do and stand my ground when walking from place to place.

2. THE PEDESTRIAN WALKING SIGN MEANS NOTHING. In the US, pedestrians have the right of way but that is not the case here. There could be a hundred people crossing and cars, scooters and bicycles will still be beeping to get by. I am surprised by how few accidents there are. 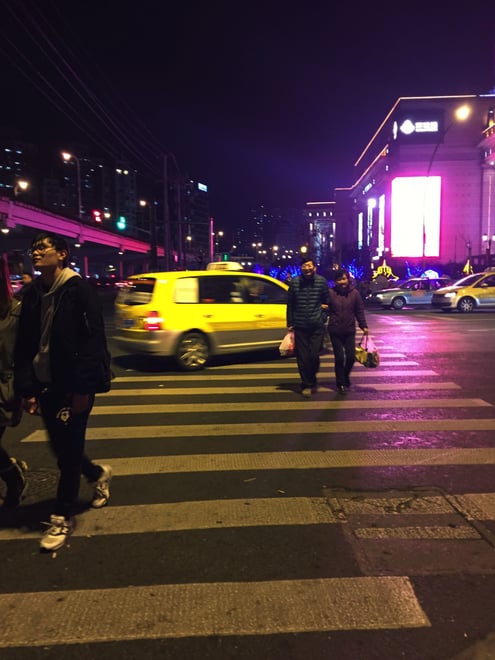 3. HONKING IS A WAY OF COMMUNICATING HERE. In the US, being honked at makes a person feel targeted and embarrassed. In Shanghai being honked at is part of the everyday life so many are not fazed by it. When being honked at people here do not really notice and tend to ignore it. It has taken me a few days to get use to the honking and be less jumpy when a vehicle is close by.

4. PERSONAL SPACE IS NOT A THING HERE. In America, people tend to stay a certain distance away from each other [known as a “personal bubble”]. In Shanghai, people walk so close that a piece of paper cannot fit between. At first when someone walked too close to me, I moved away. In a way, I felt violated because my space was not respected;that feeling went away really fast due to the multitude of people. I soon learned that moving even an inch causes people to come and squeeze into that small space.

5. THERE ARE A LOT OF STRAY CATS. Instead of squirrels running around, there are cats and kittens. It is strange to see animals that tend to be house pets back in America be wild. Squirrels move away when they hear something approach, but the cats get close to people.

I cannot wait to explore around more of the other districts and see what else Shanghai has to offer.