5 Ways I Immersed Myself in Barcelona and Spanish Culture

Stephen shares a few ways you can immerse yourself with the local culture when studying abroad in Barcelona. Speaking the language, trying the cuisine, and learning about history are just some ways you can feel closer to your host city and integrate with locals. Check it out!

With so much to do in Barcelona, it’s hard to keep track of all my experiences. I’ve been here for six weeks, and it doesn’t seem any more real after writing that down. I feel rather far from full immersion with my mediocre (at best) Spanish and a few more visits to the clubs on the beach and American fast food restaurants than I’m proud of, but I’m on my way! IN the meantime, here are a few ways I’ve found to immerse yourself in the culture of Barcelona, along with a few tips from friends.

I will admit, it can be discouraging. Oftentimes locals will respond to your sad attempts at Spanish with perfect English. In the case of an employee at a store trying to get through a shift, maybe just let it slide. You can always practice your “gracias” and move on with your day. Some people will have patience for your efforts however, whenever you have the chance to do so, practice with a native speaker. With enough consistent practice you will notice improvements. My roommate, Nolan, has been working on his Spanish by watching TV shows in Spanish with English subtitles. 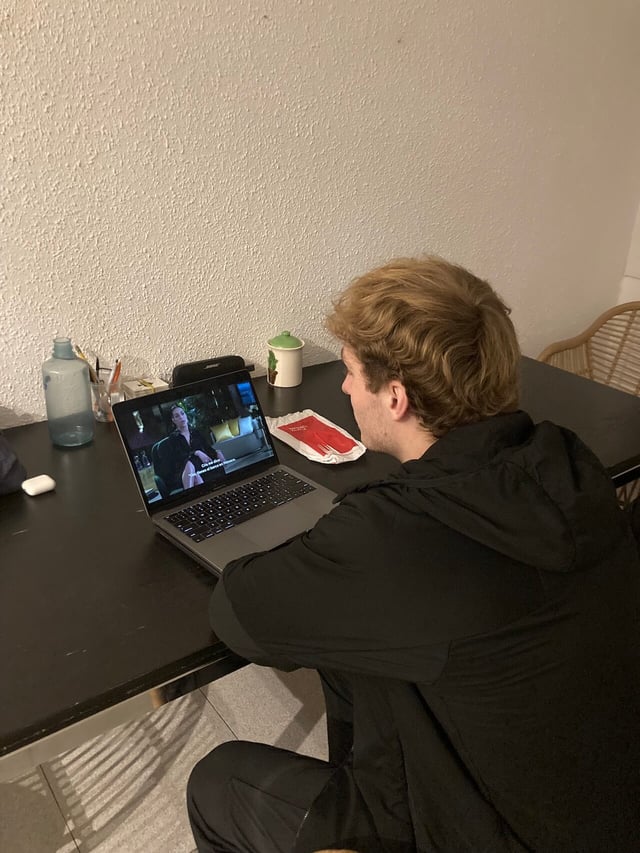 Spanish cuisine can be mouthwatering. I’ve already talked about grilled razor clams in a past blog, and I highly recommend them. More recently, I’ve discovered the classic Catalan tapa—pa amb tomàquet—which is just bread with garlic and tomato rubbed on it with some olive oil and a pinch of sea salt to top it off. It’s simple, but delectable. I can see why it’s hung around on menus for over 300 years! Fun Fact: Despite their prevalence in Italian and Spanish cuisine, tomatoes are not indigenous to Europe, and were only brought over after the colonization of the Americas. I also tried a vegan version of arròs negre the other day, served with a garlic aioli that was delicious. Overall, my advice would be to walk around the different neighborhoods and try new things, because you’ll never know if you like it if you don’t try it.

Humor my nerding out, but if you want to experience the culture of Barcelona, you’ll feel much more in tune if you understand the history of the city. I’ve learned a lot through class and the tour we took during orientation about the War of Succession, which eventually led to the creation of the Arc de Triomf and Parc de la Ciutadella, one of my favorite areas in Barcelona. Also, before coming I read George Orwell’s Homage to Catalonia, a memoir about his time in Catalonia when he joined the fight against Franco in 1936. It’s especially interesting because it was written after the Spanish Civil War, but before World War II had broken out, so there are some parts that don’t make complete sense reading it from outside that window of time. I recommend the read if you like hearing honest accounts of events in the moment and you’re interested in contextualizing the current political landscape in Barcelona. In more modern times, the Olympics transformed the city, in terms of its landscape and tourism. 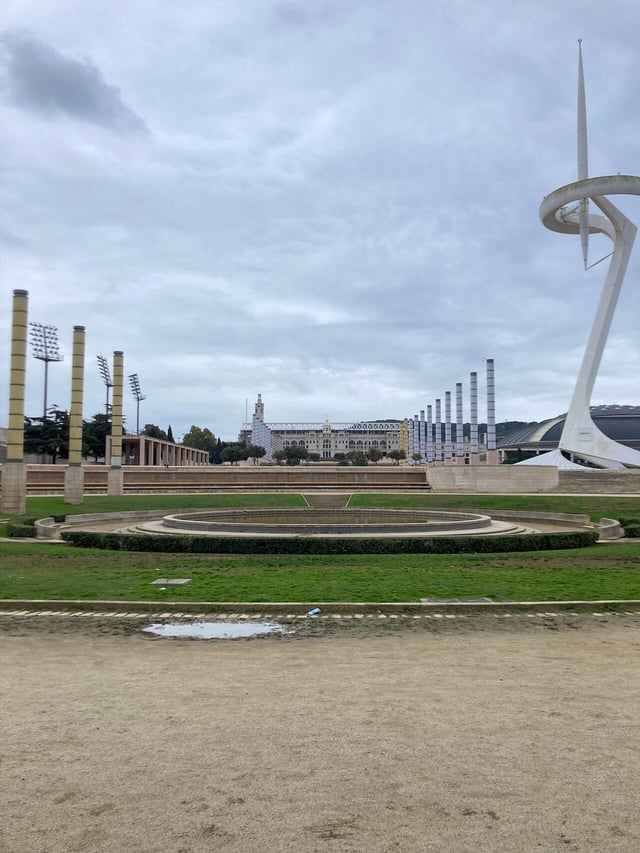 Caption: I took a stroll up to the magnificent Olympic Ring the other weekend to hopefully soak in some athleticism.

Barcelona is known worldwide for its art and design, and there are so many different ways to experience it. The KBr Fundación MAPFRE Barcelona Photo Center is a great place where you can see exhibitions of famous photographers’ works for free on Tuesdays. The Picasso Museum, located in El Born is a must-see, right next to the MOCO Museum, which displays contemporary art from the likes of Banksy, Kaws, and Keith Haring. 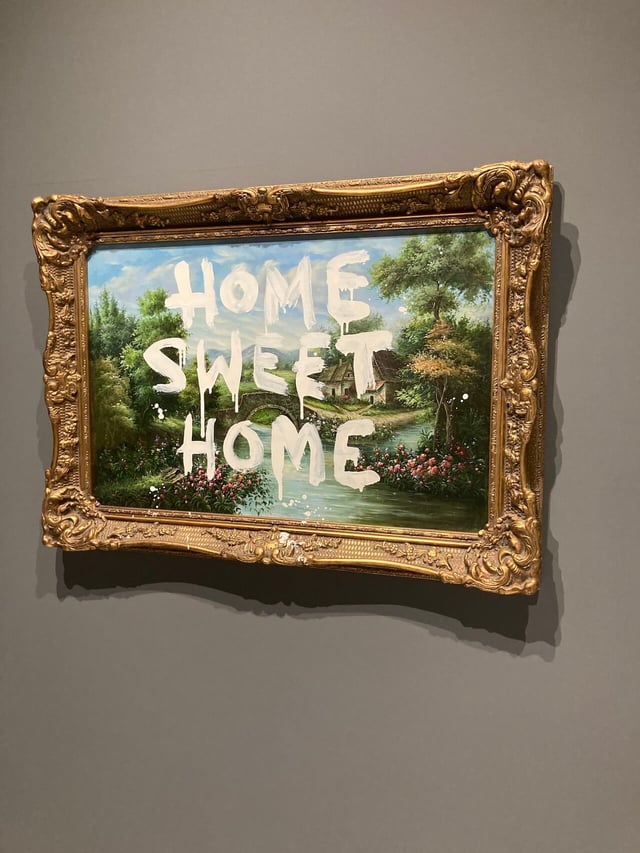 Caption: Banksy’s “Home Sweet Home”, probably my favorite from the collection at MOCO.

Along with the museums with famous artists, which usually come at a small cost for entrance, there are countless studios across the city whose work you can browse for free (or buy if you see something you like). 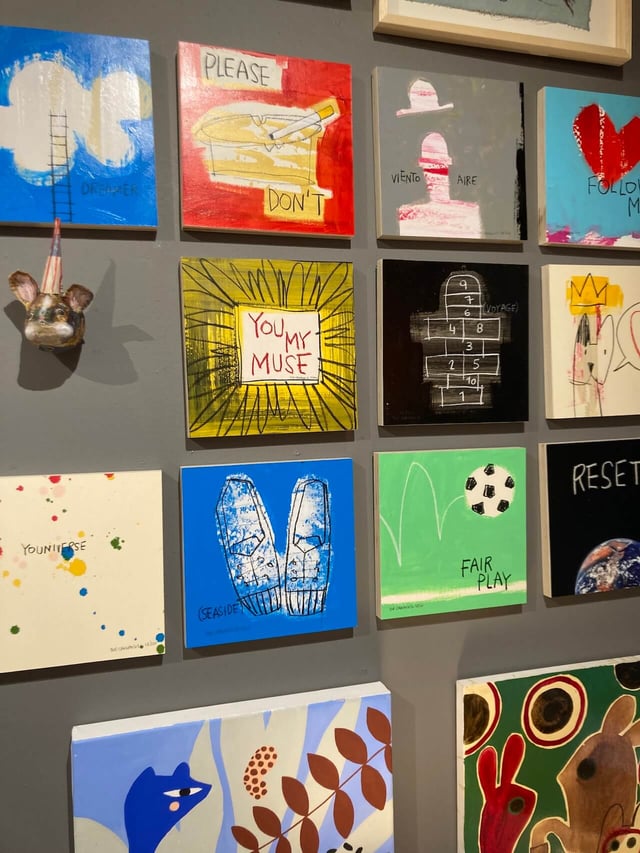 Caption: A cool collection of paintings in an art studio in the Gothic Quarter of Barcelona.

I can’t say I’ve tried this yet personally, but I know a couple people who have had lots of fun and met great people with the Meetup app. There are cooking classes, walking tours, and anything else you can imagine. One of my friends joined an exercise group that does different bodyweight workouts at famous locations across the city. It was €35 for 12 classes, or €7 for one session. They’re fun workouts according to Lucy; I have yet to make it to one, but I trust her word to tell you all about it.