Peter Tatchell, the Director of the Peter Tatchell Foundation was one of the main speakers at CAPA's recent Civil Rights Conference.

The one day event welcomed powerful speakers and a program of panel debates and student performance in an effort to share stories, enthusiasm and information around the umbrella topic of civil rights. CAPA students, staff and a few additional guests attended in London, Dublin, Florence and Boston through global network technology which allowed for participation and engagement across cities.

Peter campaigns for human rights, democracy, civil liberties, LGBTI equality and social justice and was recently awarded the Gandhi Foundation International Peace Award 2016. His inspirations include Mahatma Gandhi, Sylvia Pankhurst and Dr. Martin Luther King, Jr. You can find out more about his foundation at www.PeterTatchellFoundation.org.

We caught up with him at the end of his keynote address to ask a few questions about his activism over the years, why working in the field of civil and human rights is important to him, and to share a bit of advice for students interested in getting involved. 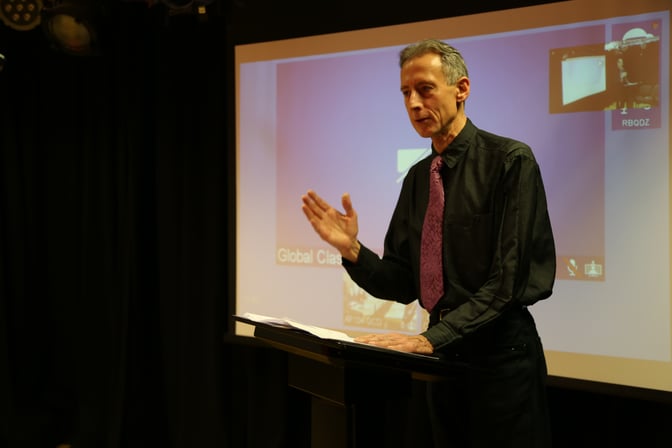 The foundation is an independent body established by friends and supporters and trustees. It is a body that seeks to work with other human rights organizations as well as doing our own work.

CW: You have been working on behalf of civil and human rights for many decades. How did you get first get involved in this work?
PT: My first ever campaign was way back in 1967 when I was at school aged 15. In my hometown of Melbourne, Australia, a man – Ron Ryan – escaped from prison and allegedly shot dead a prison warder during his escape. He was due to be hanged for the crime of murder.

I worked out, at the age of 15, while reading a summary of the autopsy report on the dead warder, Ron Ryan could not have fired the fatal shot from where he was standing and where the warder was standing. So that prompted me to believe that there was at lease a reasonable doubt about his guilt. He was in the end hanged anyway and that destroyed my trust and confidence in the government, the police and the courts. I thought to myself: How can they hang a man where the evidence does not conclusively point to his guilt - and in fact, would suggest that he probably did not fire the fatal shot? It made me a lifelong skeptic of authority.

I very quickly began to question other actions by the government, such as the treatment of indigenous aboriginal people and Australia’s role in supporting America in the Vietnam War.

Then when I was 17 and realized I was gay, that prompted another big crisis of confidence in the sense that I was outraged that, because of my sexuality, I could face several years of imprisonment and even be forced to undergo psychiatric treatment to “cure” my homosexuality. 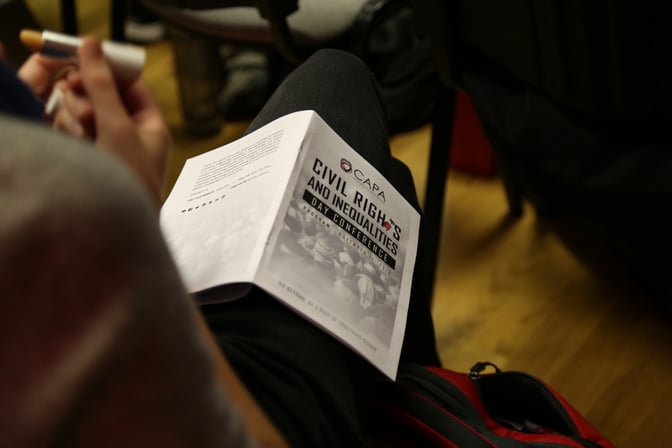 CW: You are particularly well known for your campaigns for LGBTI rights, which you spoke about today. What do you think have been the greatest steps forward in this area and where does work still need to be done?
PT: Within the UK, the big successes have been the change in public opinion that took place in the 1990s. That was largely as a result of the constant action and protests that I organized with my colleagues from the LGBT group Outrage. We did hundreds of protests to highlight different aspects of discrimination against LGBT people which got media coverage which raised public awareness about the abuses that LGBT people face. That helped change public attitude and we began to win the battle of hearts and minds.

That was followed up from 1999 onward with the repeal of all the historic anti-gay laws, not just the sexual offenses laws but the laws prohibiting fostering and adoption by same-sex couples, the laws that by default allowed employers to discriminate against LGBT employees, the fact that in those days there was no sexual education that encompassed LGBT peoples and their concerns in schools.

So those historic long-term repeals of laws – all of which took place in a period of about 12 or 13 years – was probably the fastest, most successful law reform campaign in British history. I can’t think of any issue on which so many laws have been repealed in such a short space of time.

CW: Congratulations on recently being presented with the Gandhi International Peace Award 2016. Tell us briefly about the cause to which you dedicated your acceptance.
PT: When I received the Gandhi International Peace Award in October, I dedicated my acceptance to the people of West Papua. West Papua is the western half of New Guinea in the South Pacific which was annexed by Indonesia in 1969 and has been held under military occupation ever since. Somewhere between 100,000 and 400,000 West Papuans have been killed since then. It is a very brutal occupation. People have been jailed for 10-15 years merely for displaying the West Papuan flag. So I wanted to accept the award but use it as an opportunity to raise awareness of the tremendous suffering of the people of West Papua and to signal my support for their freedom struggle.

CW: What other areas of civil and human rights is your foundation currently focused on?
PT: Among the various campaigns we’re currently working on is LGBT Muslim solidarity to try to build dialogue and collaboration between the LGBT and Muslim communities based on the principle that, although anti-LGBT and anti-Muslim prejudice are different, they still have the core of prejudice and consequent discrimination and hate crime. Therefore we should seek to work together to challenge all hate, but we particularly want to challenge that homophobia does exist in certain sections of the Muslim community and in particular to support LGBT Muslims who are both Muslims and LGBT and who are often victimized by other members of the Muslim community.

Other campaigns include supporting the battle for same sex marriage in Northern Ireland, a part of the United Kingdom where same-sex couples still can’t marry the person they love.

CW: Over the years, which other civil or human rights campaigners have you admired or closely followed that may have influenced or inspired your own work?
PT: When I began campaigning back in the 1960s, I didn’t have any mentors or anyone to guide me, so I looked to history. I drew on the inspiration of people like Mahatma Gandhi, Sylvia Pankhurst – the suffragette leader in Britain, and Martin Luther King in the US. I saw their ideals and their tactics as a way to challenge injustice. I saw that they had used successfully non-violent direct action and civil disobedience as a means, a method, to secure social change. So what I did was to adapt their ideas and methods to the contemporary struggle for human rights. 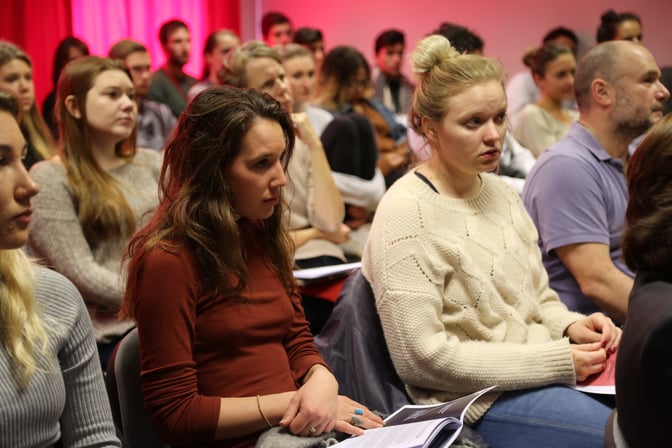 CW: How do you see your own career and goals as a campaigner continuing to evolve and progress in the years to come?
PT: Even after half a century of human rights campaigning, I’m still looking, listening and learning. I take inspiration from human rights defenders around the world. I look at their tactics, I see their courage and I try as best I can to emulate it. I’m very, very confident, very optimistic, that human rights will be universal – truly universal – one day. We’ve got a long, long way to go. On LGBT rights, we still have over 70 countries that continue to criminalize same-sex relations. There’s massive levels of violence and hate crime around the world against LGBT people, but progress is being made. LGBT people globally have more acceptance and more rights today than they had 50 years ago and so I’m really, really confident that the trend is towards greater LGBT freedom, not less, and that we will get there in the end.

CW: Why did you decide to come to share your story with the CAPA students today?
PT: I was really pleased to be invited to CAPA to share my knowledge and experience of the global struggle for LGBT rights because I think it’s really important that LGBT issues are integrated into educational curriculum. It’s really important that students get an overview of what’s happened and where we’re going and realize the battles that still need to be fought and won. For me, this is an opportunity to share my experiences and knowledge and activism with a youth audience and, hopefully, among the people that listened, some will at least take on board some of the ideas that I raised and think about ways that they can perhaps contribute to the ongoing struggle for LGBT rights.

CW: What advice could you offer to students who wish to pursue a career in civil rights?
PT: I think it’s really good and positive if students can think about what they can do for LGBT and other human rights. I don’t expect them all to become full time campaigners or to take some of the crazy risks that I’ve done over the years, but for those who do want to pursue a full time career in human and civil rights, usually the best starting point is to do an internship with an organization like Human Rights Watch or Amnesty International or in any of the myriad of human and civil rights groups that exist, to get the knowledge and the experience and the entry into that world. The background knowledge they learn can be applied not only to that particular issue but to other issues as well. I really salute those who want to make a difference. It’s their activism, our activism, our collective work that brings about change.

CW: To you, what is the most important takeaway for CAPA students attending this event today?
PT: I hope that from today’s CAPA event, students will go away perhaps learning something they didn’t know and perhaps feeling motivated to get involved in progressing issues that they heard about. Maybe, having heard about, from me, the scale of global homophobia, biphobia and transphobia that still exists, maybe some students might decide to get involved with or support an LGBT organization. Maybe they will think about lobbying their congressman or woman or their elected officials wherever they are. And maybe they will think about perhaps setting up – if there isn’t one – an LGBT-Straight alliance in their educational institution.

CW: Any final thoughts?
PT: I’ll finish with my motto, which is: Don’t accept the world as it is. Dream of what the world could be - and then help make it happen.