7 Reasons To Pick Barcelona As Your Next Study Abroad Location

If you been thinking about studying abroad in Barcelona, here are 7 reasons to take flight (from a current student). Perfect geography and weather? Check. A vibrant energy with a balance of carefreeness? Check. Let Stephen Dwyer tell you more in his blog.

I’ve been in Barcelona for a little over 2 weeks now, but it feels much longer. In that time, I’ve met many new faces, gone to new places, and learned a whole lot. There’s still so much to do, but I’ve decided to take my experiences and compile a collection of seven reasons anyone should pick Barcelona as their study abroad destination.

Is this one a cliché? Sure, but studying abroad is a great privilege that I think everyone in college should try to take advantage of. There will not be many times in your life where you get to live in an apartment in a major global city and take classes (and in my case, intern) for less than the price of a semester of in-state tuition at home. It’s an amazing opportunity to expand your horizons while you’re still young and deciding what you want to do, and again, probably the most cost effective way of doing it while still working towards your degree (so you can go make some money after graduation and come back to Barcelona). 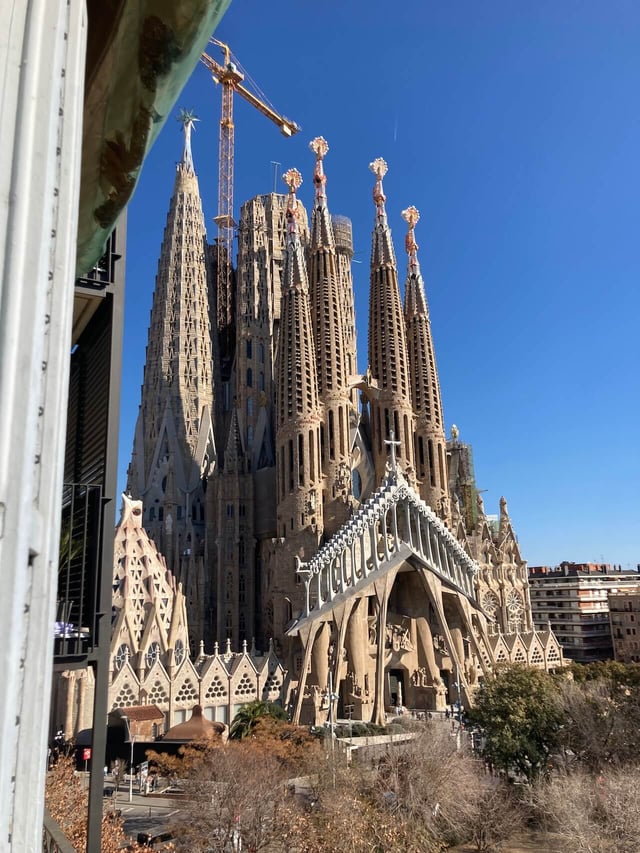 Caption: Case in point: in no world could I afford an apartment directly in front of La Sagrada Familia at 20 years old, yet here I am, waking up to this view every day.

This is not hyperbole. It took me two weeks to see a cloud in Barcelona. Maybe I wasn’t looking hard enough, but truthfully, coming from cold and overcast Massachusetts, I’ve been in awe of the fact that every single day is a perfect day here. 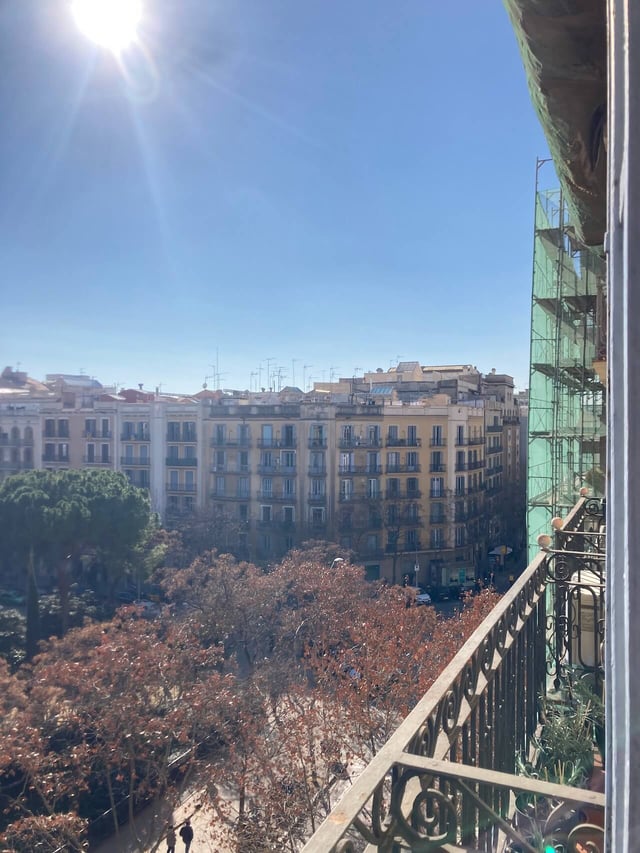 Caption: Sunny Barcelona - as seen from my balcony.

No disrespect to my dad’s cooking or UMass dining, but I’ve been eating well here. My favorite meal so far has either been the paella I got on the first day here or the tacos I got at La Taqueria. It’s all good, though. Fruit tastes fresher, fish is coming right from the ocean down the street, and every kebab place is also a pizzeria for some reason (shoutout Tchey’s Kebab). 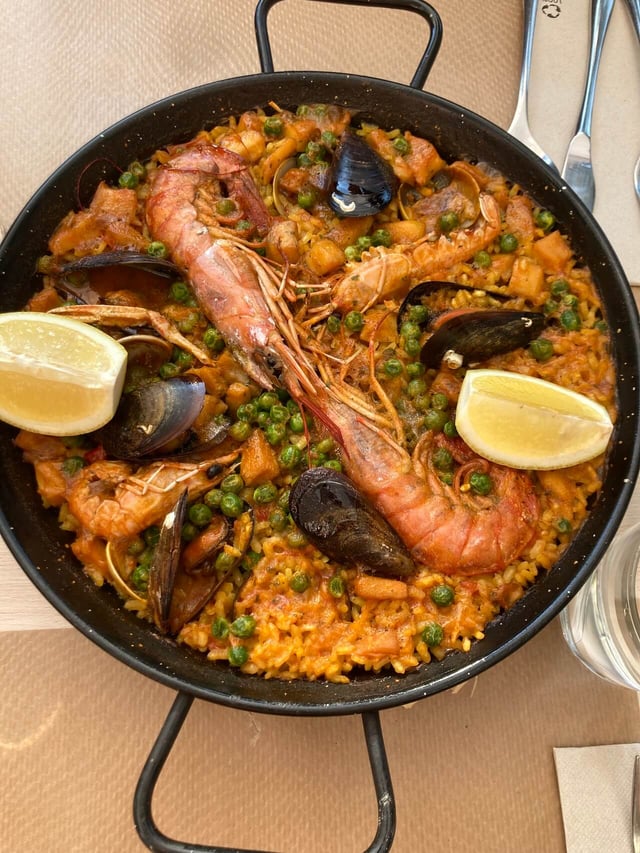 Caption: The paella my roommate and I split on the first day here. Those are prawns, and while they’re tricky to crack open, they taste great.

Not much to explain here. You walk outside in Barcelona, and you will see an adorable pup within a minute, without failure. I don’t know what it is, if a lot more people got dogs during quarantine here or what, but the streets are filled with people walking their dogs at all times of the day. 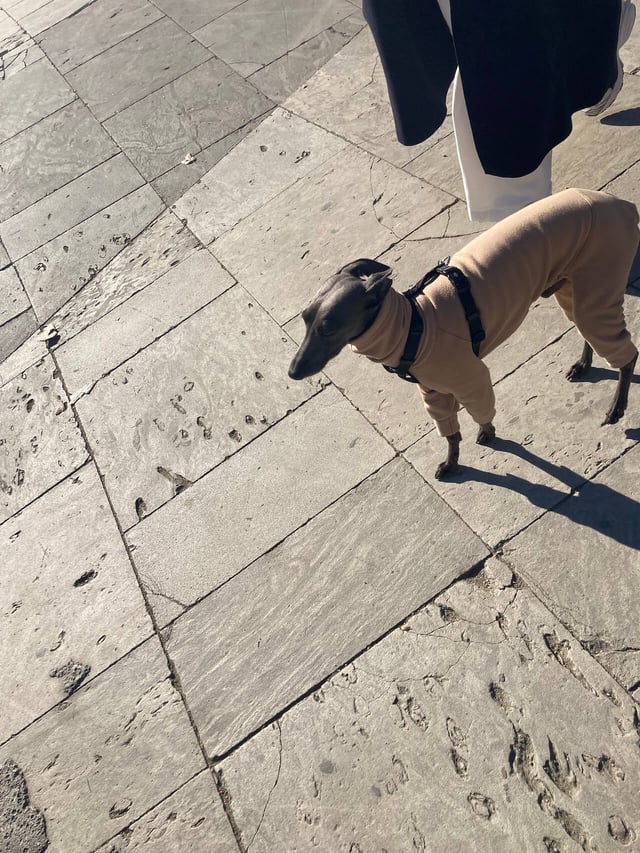 Caption: What I believe is called a "whippet" that I’ve seen twice now. Both times wearing his little turtleneck. What a stud.

There may be some overlap with this one and the rest, but everywhere you look in this city you can find beauty, from the buildings to the Mediterranean, to the street art covering almost every wall. My favorite part of this so far has been the graffiti because of the outlandish and colorful pieces of art that the city seems to support, unlike back at home.

I don’t know if geography is every college student’s reason for choosing a study abroad destination, but I can honestly say that it was mine. It’s location right on the Mediterranean was a huge drawing factor for me, and once I heard that it was possible to go skiing and go to the beach on the same day, I was sold. I haven’t hit the real mountains yet, but the beaches have been a pleasure. The “mountains” right outside Barcelona also provide a great escape from the urban landscape as well as insane panoramic views of the city below.

Caption: The view from the top of Montjuic, which has housed some version of the fortress there for more than a thousand years!

Obviously there’s the art: Picasso, Mirò, and Pau Gasol were all born here (can’t tell me Pau’s work in the mid-low post wasn’t art), the architecture (some guy named Gaudi you may have heard of?), and the ever evolving design industry of Barcelona; but residing in all of that is just the way people choose to live here. Although the slow walking on the sidewalks can be bothersome, I have admiration for the people of Barcelona’s aptitude for living life at a leisurely pace. It’s not that they don’t work hard, they do. But they’ll also sit outside a cafe from 10am to 8pm, sipping wine and conversing with friends, or soak in a couple hours of sun on their balcony. This dichotomy gives the city a certain feel that’s hard to describe. It’s simultaneously laidback and buzzing with energy all the time, and I’d recommend an extended stay in this to anybody so you can really know what I mean. 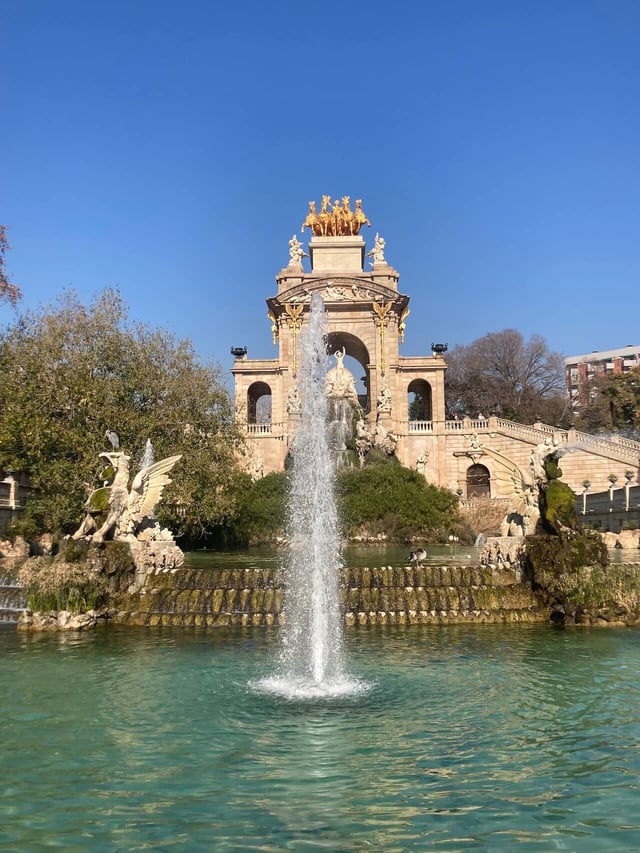 Caption: The Ciutadella Fountain in Barcelona.