From G-A-Y to Heaven: A Beginner’s Guide to London’s Queer Underbelly

London is full of welcoming spaces and events for the LGBTQ+ community. In this blog post, James shares a guide to queer life in London, focusing on the places and events he appreciated the most— from book stores to dance floors.

One of the most unexpectedly meaningful elements of my experience abroad in London has been the many events, bars, clubs, and opportunities available specifically for the LGBTQ+ community. As a queer person myself, I was initially hesitant to explore these spaces or attend events centered around queer issues. I felt somewhat intimidated by the throngs of well-dressed people lined up outside late-night venues and worried I would stand out at more low-key events. Yet my fears could not have been more unfounded: I found the LGBT bars, night clubs, and other spaces to be wildly inclusive and accessible to an initial outsider such as myself. As it turns out, when you stick a bunch of people together who have been alienated and stigmatized by a traditionally heteronormative society for most of their lives, you end up with a group of remarkably friendly, fun, and thoughtful individuals. Through this blog post, I hope to provide a guide to queer life in London, focusing on the spaces and events I appreciated the most. This is by no means an all-encompassing or unbiased account - there are many ways to experience London’s queer offerings, and I certainly wish I could have ventured to a wider variety of neighborhoods and spaces. That said, my exploration of queer life in London was a deeply affirming and wildly fun part of my abroad experience, and I have made some of my most treasured memories on the dance floor with friends. 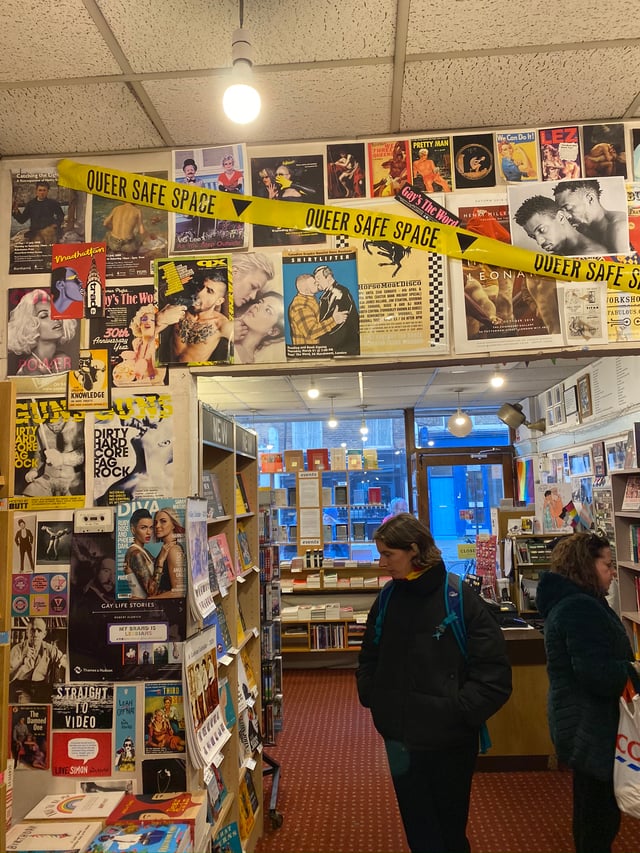 The view from inside ‘Gay’s the Word,’ a historic bookshop in St. Pancras. I have never felt safer & more encouraged to learn about radical queerness than I did here.

One of the first queer spaces I explored was a small bookstore sandwiched between the British Library and the British Museum known as “Gay’s The Word,” - while this store may not have the same level of renown as the two major tourist destinations which surround it, it is a deeply significant landmark for London’s queer community. It is the only bookstore specifically focused on LGBTQ+ issues in England, and has historically served as a meeting place for the queer community’s most vulnerable members - groups like the Gay Men's Disabled Group, the Gay Black Group, or the Lesbian Discussion Group all met here every week for years (and some continue to do so). By carving out specific spaces for these members of the queer community, Gay's the Word is explicitly empowering and supporting these specific kinds of people - walking through the store, you can almost feel the shop’s historical significance radiating from the shelves. The cashier was exceedingly friendly, and recommended a book which I ended up purchasing and devouring. 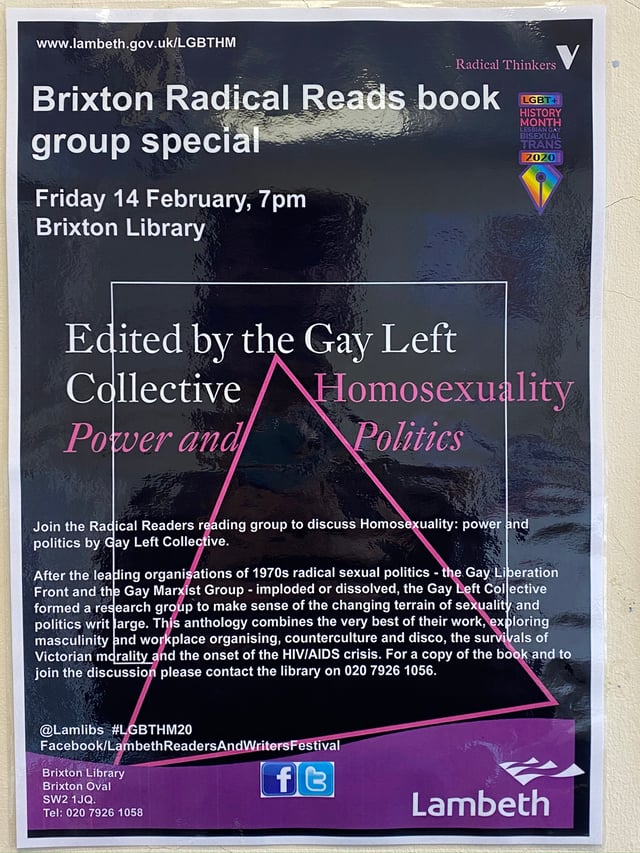 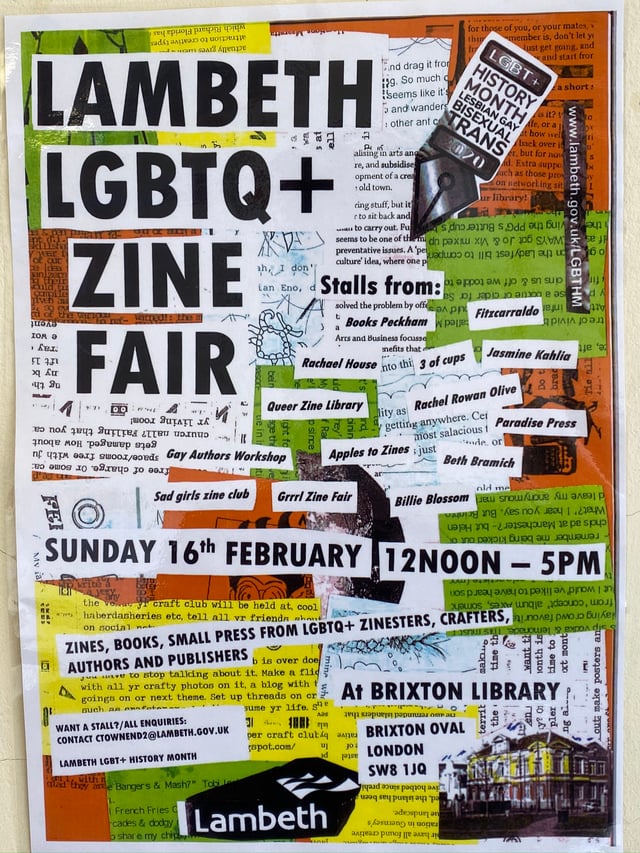 Two posters hung outside ‘Gay’s The Word’ advertised special events being held for London’s LGBT History Month, which takes place in February. Looking back, I wish I had carved out more time to attend these kinds of events!

My positive experiences at Gay’s the Word encouraged me to look for other academic and political events being hosted by various groups for London’s LGBT History Month in February. And there were many to be found, especially at museums and libraries, which I found to be challenging and fascinating (and mostly free!). Towards the end of my time in London, we took a day trip to Brighton, a coastal city home to a vibrant queer population which host’s the UK’s largest pride parade. I enjoyed walking through the town’s queer neighborhood and looking for the ways in which it differed from London’s. 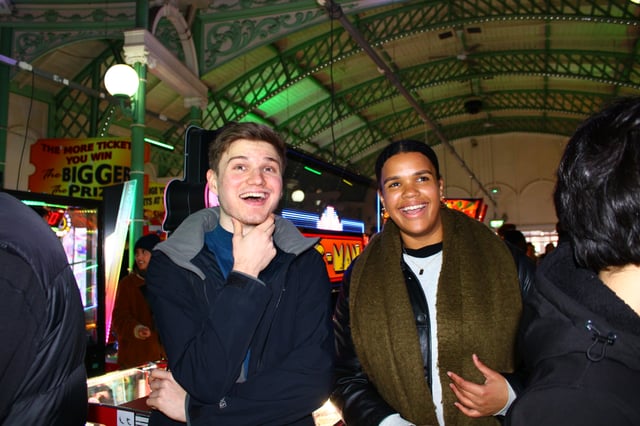 Me and my friend Chaylin happily exploring Brighton’s massive arcade and amusement park on the Brighton Palace Pier.

But we must turn our attention to one of the biggest attractions to living in such a big city like London: a vibrant and massive queer nightlife scene, which has transformed from a secretive series of small rooms to an industrial behemoth at the heart of Soho. There are countless gay bars and nightclubs within the Soho neighborhood - and many more outside of this, especially below the Thames in Vauxhall, though I sadly did not get the chance to explore these other spaces. Many appeal to different subgroups within the queer community, though there are embarrassingly few options available to queer women (whereas gay men may choose from a glut of different kinds of bars and clubs catering specifically to them). The two I visited most often, a bar called G-A-Y and a club called Heaven, typically have a younger crowd and often play commercial pop songs, which I really enjoyed. 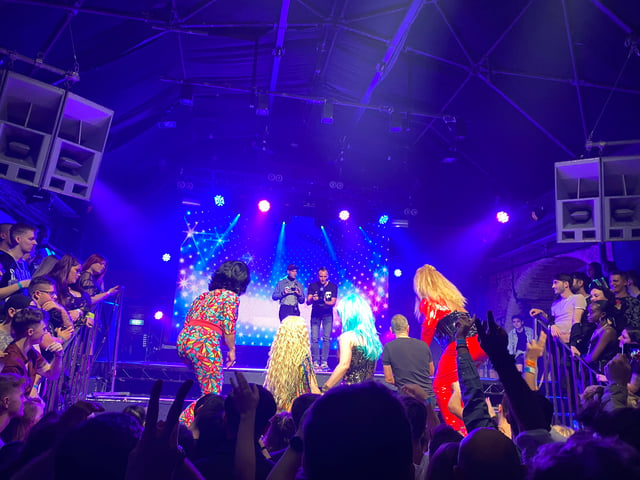 Four world-famous drag queens pose for a photo onstage at Heaven, one of London’s biggest and most famous queer venues, after each performing phenomenal lip syncs. This photo was taken moments before mountains of confetti and balloons were released from the ceiling onto the danced-crazed attendees below.

The above photo was taken late at night at Heaven, an enormous, labyrinthine gay nightclub in Charing Cross. This might well be my favorite queer space in the city, if only because of how affordable the entrance fee is and how relentlessly fun each night there can be. A first-time visitor will immediately notice the crowded dance floor with hundreds of people - as the room pulsates with beams of light, fog fills the air, and Womanizer by Britney Spears booms throughout the space, the infectiously fun energy will likely carry this new visitor late into the night. Eventually, a drag queen makes an entrance onstage and performs a set for a roaring audience, before the dancing resumes. After spending many nights there, I can honestly say that I have never found more confidence or felt more affirmed as a gay man than I did in Heaven’s hallowed halls.

Before heading home for the night, my friends and I stopped at one of the club’s massive mirrors to take a quick picture in the fluorescent lighting.

PS - A Pro Tip: If you want to pay significantly less AND skip the long queue to get into Heaven (the wait can sometimes be up to two hours), stop by G-A-Y first and pick up the free wristbands from the attendees standing by the door. Heaven is only a brisk 10-minute walk away from the bar, and the wristbands will save you an invaluable amount of time. Have fun (and be safe)!