In this week's post, Catherine takes us along on a CAPA My Global Education adventure to the Blue Mountains and Featherdale Wildlife Park.

At 7:30am on a Saturday morning in Sydney, my bleary-eyed roommates and I pulled away for a day full of adventure. Through the CAPA program and a company called Colourful Trips, we were able to experience Featherdale Wildlife Park and explore the Blue Mountains all in the same day. 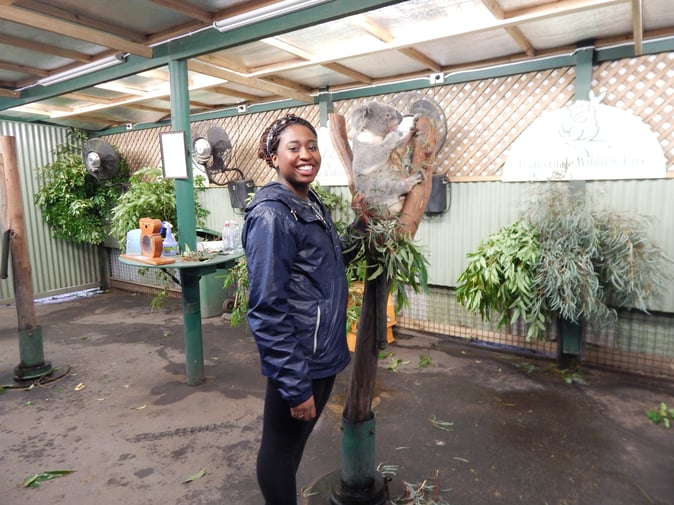 On the way there, I was too excited to fall asleep even though the wildlife park was about one hour away. When we reached our destination, I was instantly amazed. Despite the cold, rainy weather, the animals still managed to be entertaining. Wallabies hopped around the park from the moment we stepped in. We could hear the mingling of bird calls - from the pelicans to the macaws. The park was nearly empty due to the weather, except for the group of about 40 CAPA students.

As we meandered through the animals, I noticed that they seemed rather free in comparison to the zoos. For the most part, the animals were not harshly locked in. They had room to move and travel. The kangaroos hopped gleefully around their pen and the Tasmanian Devils sprinted around their enclosure with incredibly energy. The crocodile swam circles in his mini pool and two, orange-furred dingoes napped peacefully. But of course, we had to see the hallmark of Australian wildlife - the koala. 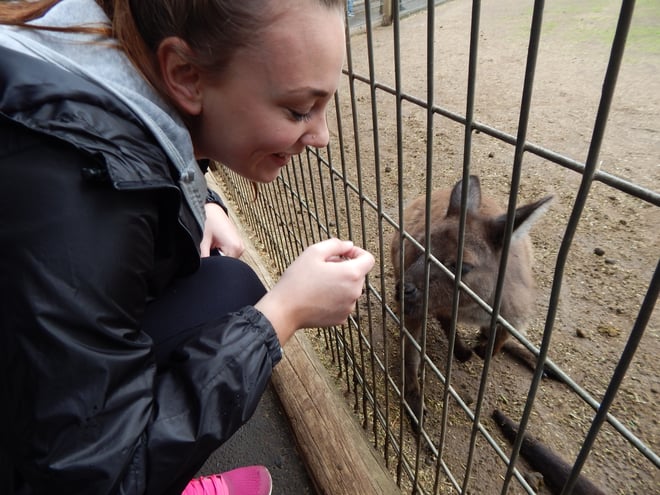 We waited for the line to progress as students walked up to pet the koala and take pictures with it. On a stump, sat an interesting-looking marsupial. Like a celebrity of some sort, he sat while the handler fed him leaves to chew on. His life of eating and posing sounds pretty enticing. 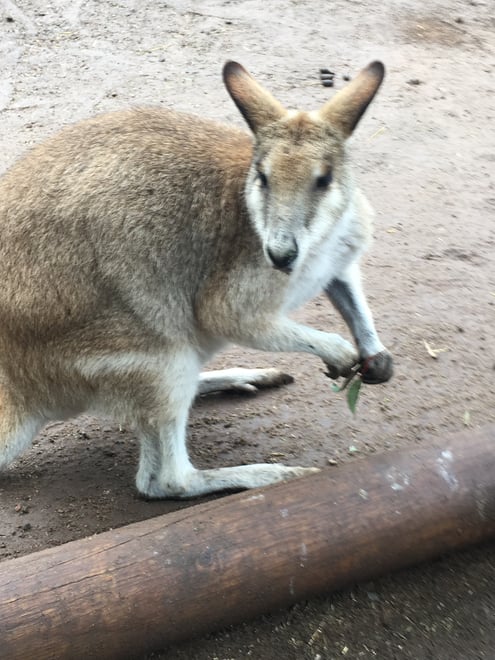 After Featherdale Wildlife Park, we returned onto the bus for some more traveling - this time to the Blue Mountains. This time, I napped the entire bus ride until we were parked at the Center. There was an extensive gift shop, a cafe, restaurant, and toilets available for us to use. From the restaurant, there was an outlook which we could stand on to observe the abyss. Lush greenery was clouded by thick, white water vapor. I felt as though the abyss was endless. I was looking over a cloud of white like one might look over the tops of the heavens. The view was breathtaking and yet humbling. We were so excited to hike through the mountains themselves. 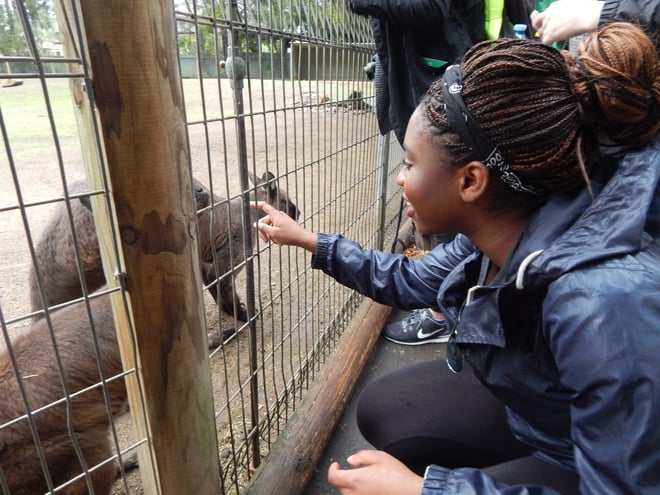 We walked down the famed '1,000 Steps' of the Blue Mountains behind our tour guide. He explained that this rainforest within the Blue Mountains was a cooler, temperate forest. Luckily, we did not have to worry about Huntsman Spiders or venomous snakes attacking us. Instead, we could enjoy the geological features and the rush of the rich waterfalls. We painted our faces with paint made from sandstone. We saw an Aboriginal 'sink' and learned the story of the Three Sisters - a geological formation. While I won't relay the whole fable here, like many American stories, the story had a moral. This moral just happened to be: "Listen to your father." It was an interesting message to hear so close to Father's Day. 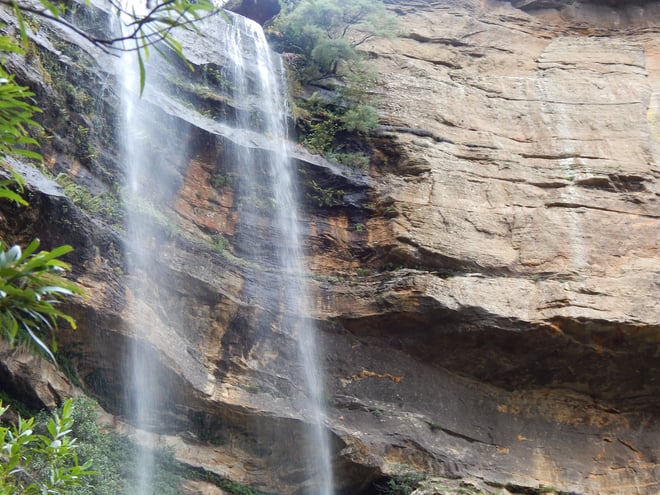 When we reached the bottom of the hiking trail, our quadriceps burning from all of those steps, we took a quick railway - one of the steepest in the world - back up the mountain! 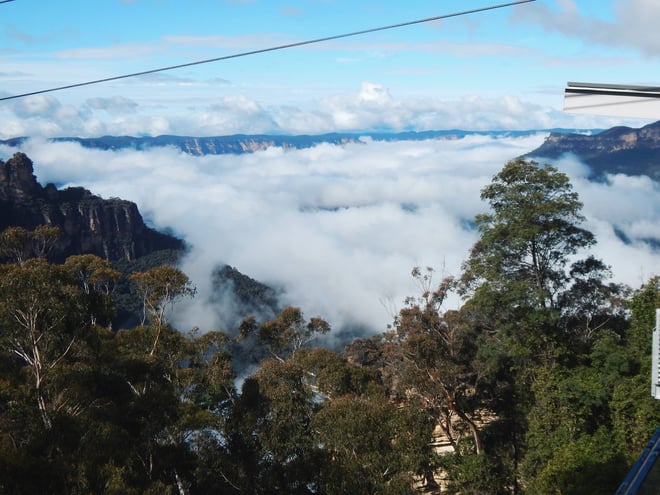 While I love the urban environment of Sydney, it was refreshing to see the more natural side of Australia. Being connected to the landscape and the animals was a truly humbling and rewarding experience. I was grateful for the opportunity allowed by CAPA to explore the Australian environment. 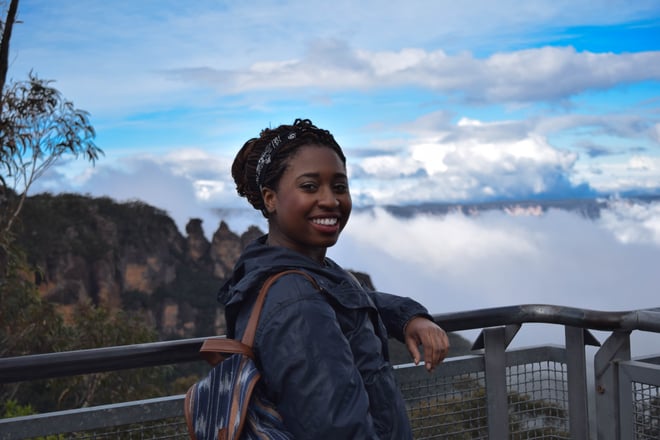