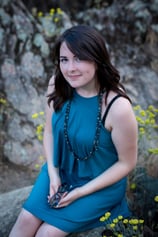 In this week's post, Sara takes us along to Featherdale Wildlife Park and the Blue Mountains on a CAPA My Global Education excursion.

My class got up at the first sign of morning and almost everyone was in the lobby ready to go by the designated departure time (7:00am). We somehow managed to crawl like zombies out the door and into the van, shrieking only slightly at the bright sun. Although we had a late take-off from urbanest, we were all looking forward to getting a taste of Australia’s wildlife. Our tour guide, Billy, kept our spirits high with his delightful banter and it was wonderful getting to hear about Australia through the eyes of someone who’s been living here for about 35 years.

Our first stop on the way to the Blue Mountains was at the Featherdale Wildlife Park. Sadly we only got to spend just over an hour greeting and learning about the animals here. Although we all could have used another hour or two, it was amazing getting to see a sample of the great diversity that Australia holds all in one place.

By far my favorite moment was finding the “Tiny Penguins” (below on the bottom left), they’re all so cute and playful. Below in the bottom right is an animal called the Spotted-tailed Quoll which is sadly an endangered species. They’re so small and quick; the way they dart around the enclosure instantly reminded me of the two opossums, Crash and Eddy, from the movie Ice Age. 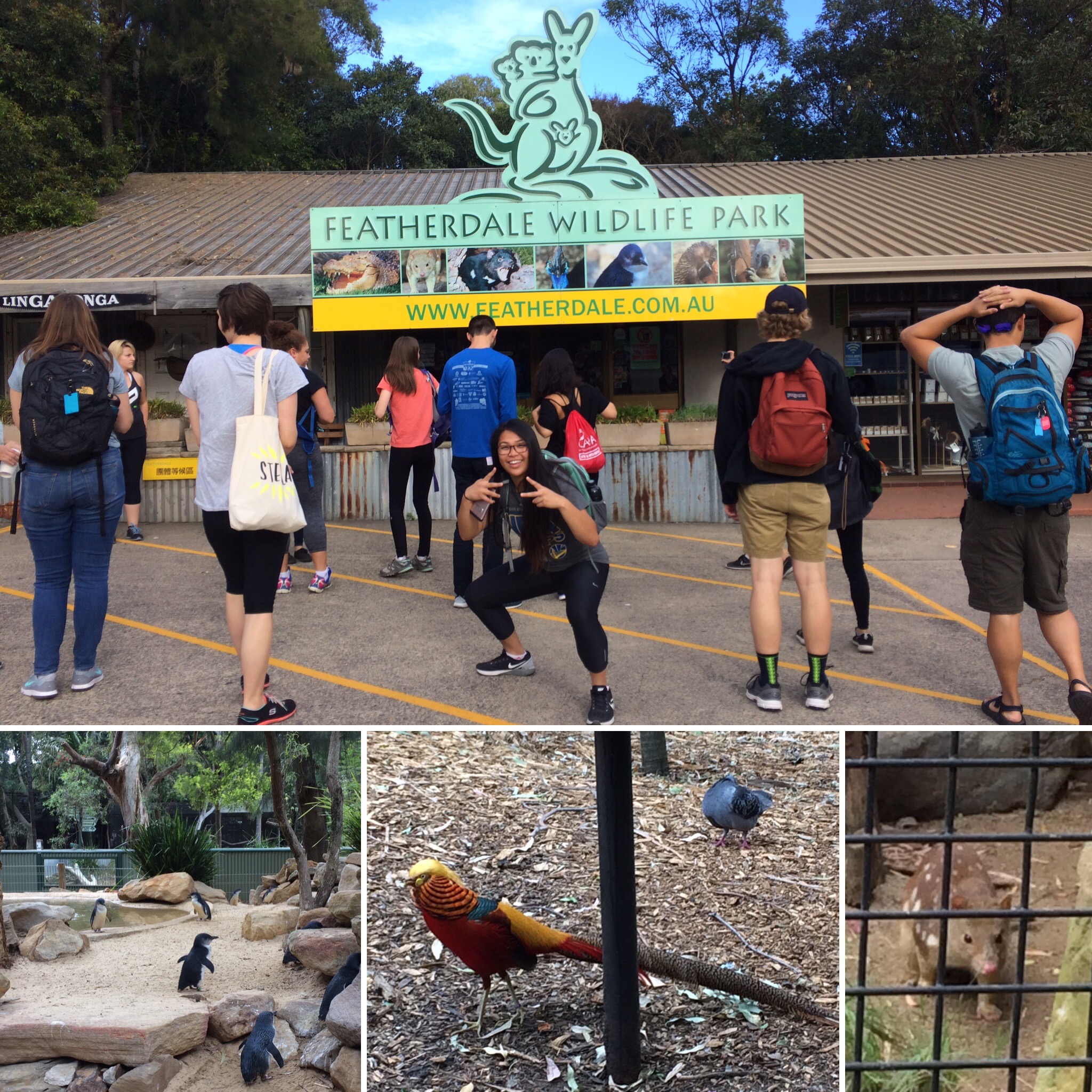 The first animal I encountered upon entering the park was the adorable wombat below in the top left. While it may look like a little fuzzy bear-pig, they don’t like contact and will definitely bite if provoked. There were many mothering animals within the park, like the koala below in the top right. While most of the animals appeared to be relaxed or even happy, there were some like the Black-necked Storks in the center right who didn’t appear to agree with their roommate situation. Even some of the tiny penguins were seen playing rough, trying to assert their dominance over the others. Now that I have officially met and pet kangaroos and wallabies, I finally feel like I’m in Australia. However, I doubt that the kangaroos in the wild would have been as nice as the ones at the park, tamed over time from being hand fed by the park attendees. 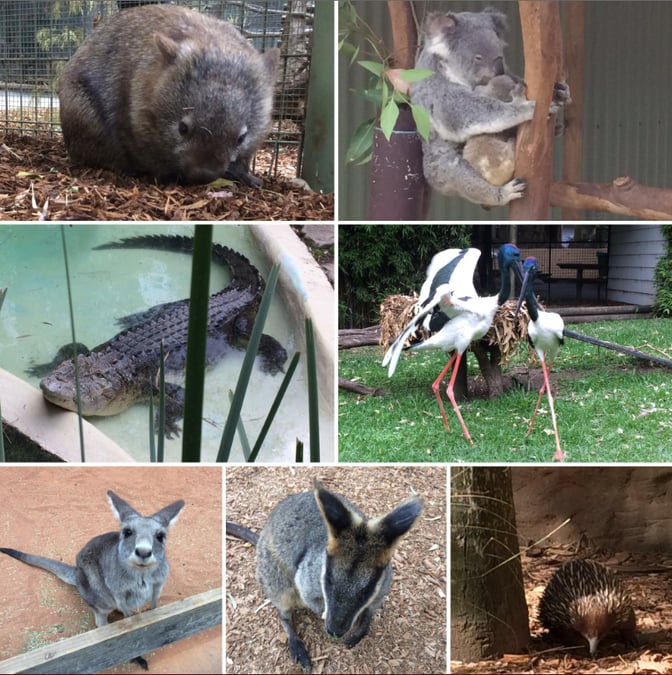 One of the largest dividing ranges in the world, the Blue Mountains were a breathtaking sight. I could have sat in the lush forest and gazed out into the blue-tinted earth for hours on end. For anyone visiting Australia, I definitely recommend taking a tour at least down to where you can see the “three sisters” formation (on the left of the top picture below). Our guide told us the Gundungurra dreamtime story of the sisters, Meehni, Wimlah, and Gunnedoo, and how their father, Tyawan, turned them into stone in order to protect them from the deadly Bunyip (snake). It left me with this feeling of appreciation for the tribes because they would explain these formations in ways that make you feel emotionally connected to the earth. 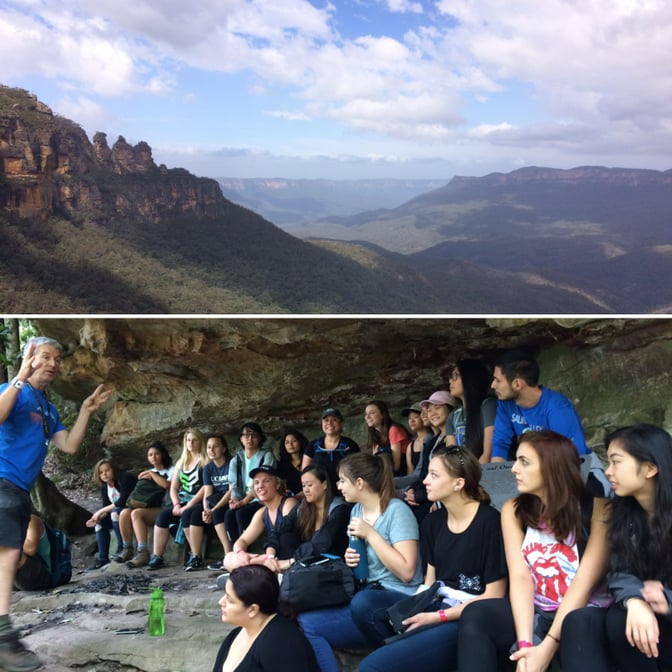 After this serene moment, we walked further down until we stepped out into this beautiful clearing below. Vera’s Grotto was so peaceful and immense, the only way to truly appreciate it is to go there oneself and sit and listen to the water and the animals as they travel along. I felt so small watching the water trickle down the rock from so high up above. We were fully encased in the forest and I couldn’t have asked for a better way to end our short trip out into the mountains. 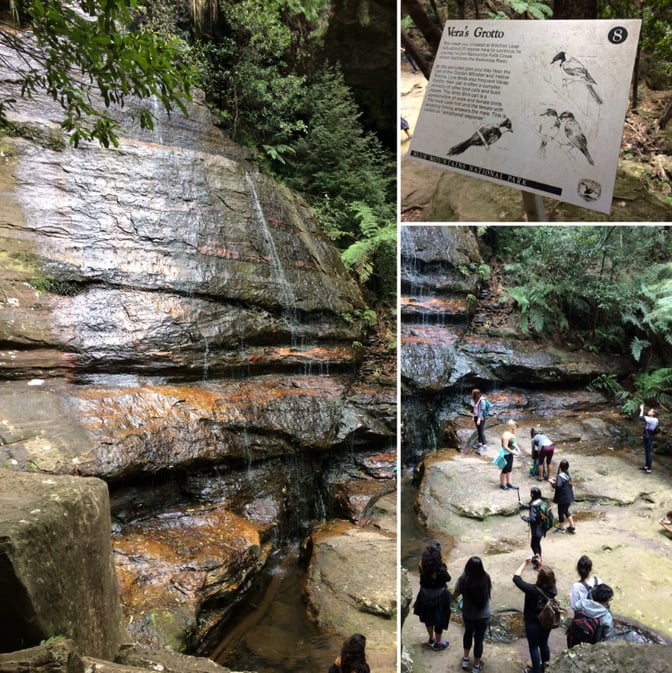 As a Biology Major…

I was very happy when Billy began explaining some ecology of the area. He told us about the ever-common gum trees and explained how some have worms that burrow under the thin bark, creating the “squiggle” markings seen in the top left picture below. He explained the hypothesis that the blue tint seen in the mountains was due to the way that the eucalyptus oil in the air refracts the blue light. We got a peek of the ledge that Darwin speaks about in his diary while exploring the Blue Mountains (the nerd in me was very excited about this) seen in the top right of the picture below. I can’t wait to go back soon and travel along Darwin’s Walk. Billy also explained some of the coal-mining history which led to formations like the one in the bottom right below; miners used to fill that crevice with water and use it like a drinking fountain as they worked the day away. Billy also told us about funnel-web spiders and how to spot them but I’ll save that for a later day. 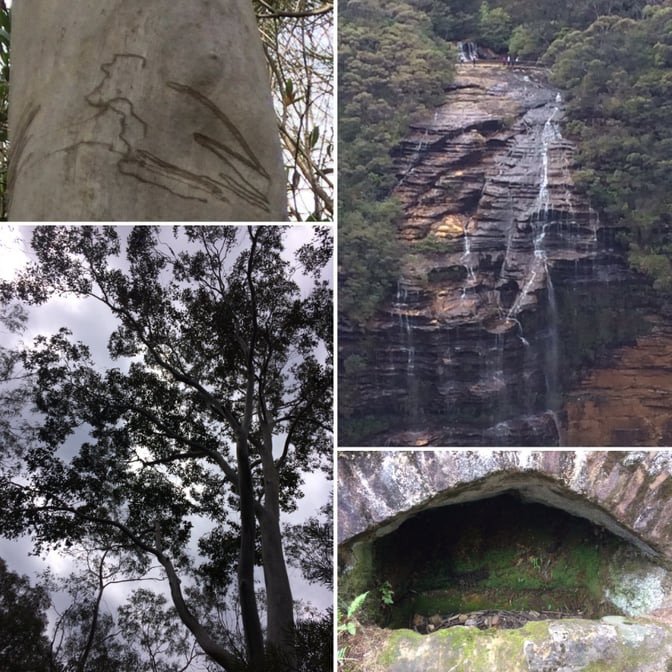