A Day Trip to the Cliffs of Moher and Galway

In this week's post, Brandon brings us along on a CAPA Dublin day trip to the Cliffs of Moher and Galway and shares what happened along the way.

In this blog post, I will describe an event that happened last week, which was a day trip to Galway and the Cliffs of Moher. There are two such day trips included in the CAPA study abroad program, one being to Belfast and the other being to the Cliffs of Moher and western Ireland. Everything is provided including transportation to and from and scenic tours, but you have to either buy or provide your own lunch. In my opinion, this allows for a greater opportunity to walk about and explore, so I didn’t mind having to go get my own lunch. 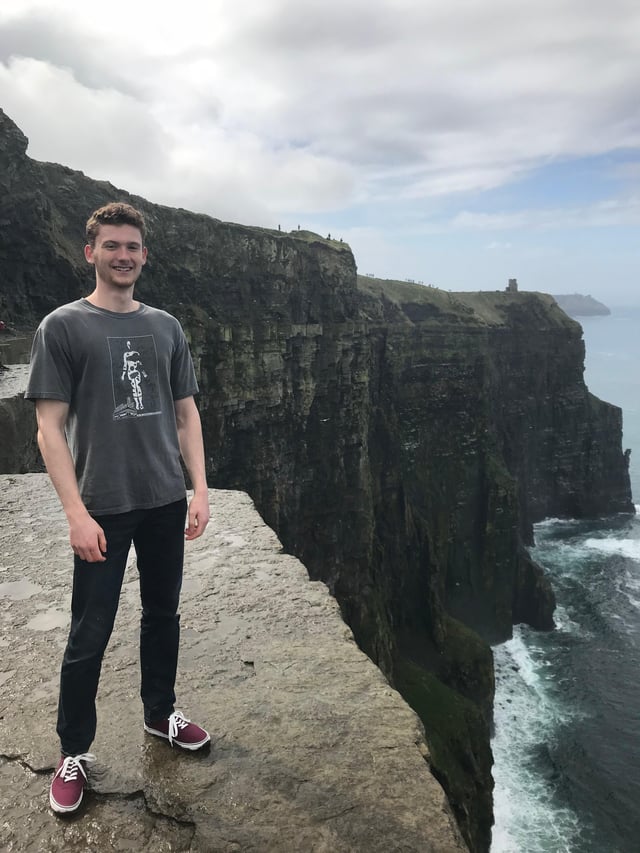 At the Cliffs of Moher on a day warm enough to wear a t-shirt.

We started off the trip bright and early at 7:15 in the morning. We all met up at the front gates of Griffith College and were whisked away by an unusually chipper Irish bus driver considering the early hour. He gave us a quick run-down of Irish history and various local landmarks on the drive to the Shannon River, like how the Shannon was used for transcontinental flights by sea planes and pointing out various tower houses and castles lining the highway. A lot of us spent the ride to the Cliffs of Moher napping or eating snacks. 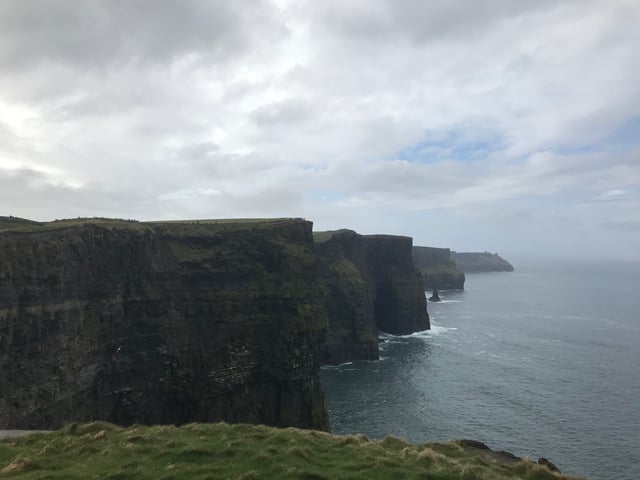 A CAPA Dublin day trip visiting the Cliffs of Moher.

We did stop off at the Barack Obama Plaza in Moneygall, however, for a bathroom break and a quick breakfast if we so chose. Although it may sound ridiculous, there is a shopping plaza and gas station off the highway in Ireland named after former President Barack Obama. Eight generations previously, one of Obama’s Irish ancestors left Moneygall and sailed to the U.S. Obama came to visit Moneygall on one of his presidential visits the Ireland, touching down in a nearby field in a helicopter and stopping long enough in the village to have a single pint of Guinness (the pint glass was promptly confiscated by the FBI who feared that someone would copy his DNA on the glass). Moneygall was on the verge of dying out, with most of its residents having left, but, following Obama’s visit, they chose to build and name a gas station after him and it has become a roaring success. The village is now doing very well due to tourists stopping in, and there is even an entire floor of the shopping plaza dedicated to President Obama and America upstairs. It was very surreal to see! 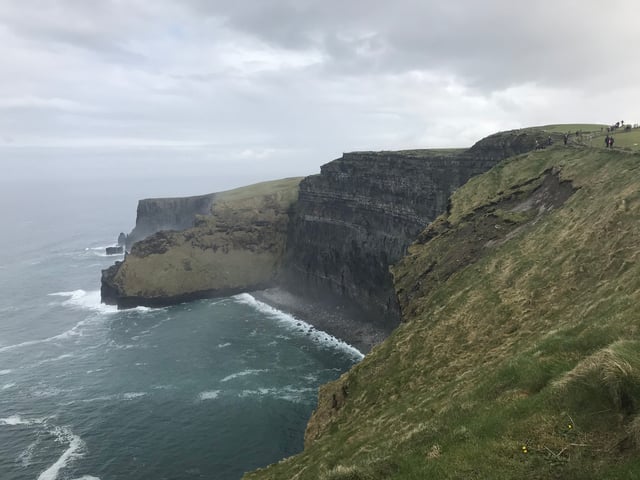 A breathtaking view of the Cliffs of Moher.

Having bought myself a scone at the Barack Obama Plaza and slept for most of the previous leg of the journey, I was wide awake when we got to the Cliffs of Moher. The weather was unusually pleasant, with it being warm enough for me to wear a t-shirt and there being absolutely no wind. The bus driver was amazed at how nice it was. The Cliffs themselves were breathtaking, and I walked all the way along them with a group of other CAPA students. I would suggest going to the right towards the part of the Cliffs that are on public land rather than the national park because the views are much better and there are far less tourists milling about. However, be careful because the part of the Cliffs on public land doesn’t have any sort of barrier, so you could quite literally walk off them. Watch for soil erosion and don’t go too near the edge! 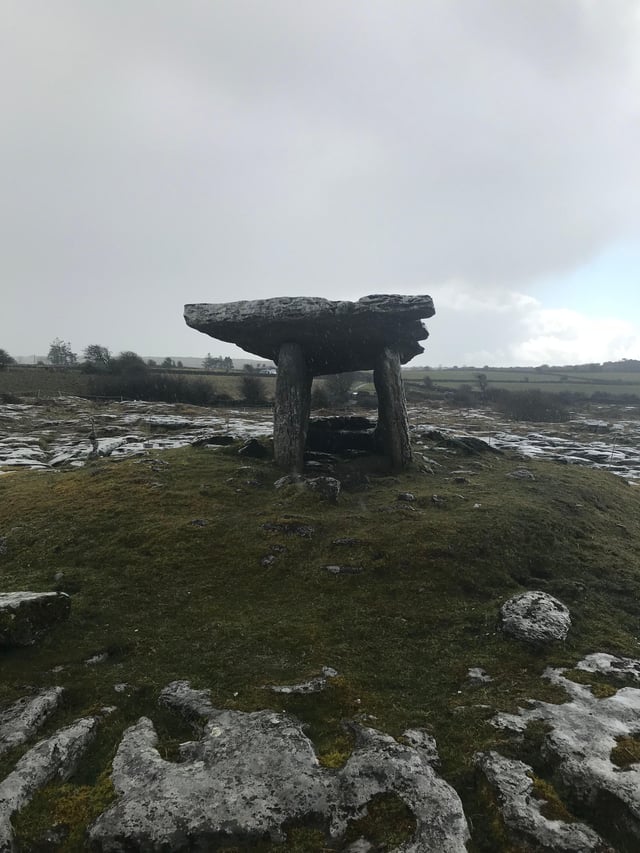 After seeing the Cliffs, we drove to Galway with a quick stop-off at Poulnabrone Dolmen, which is an ancient burial site at which archaeologists have found the remains of 40 different people, including several children. 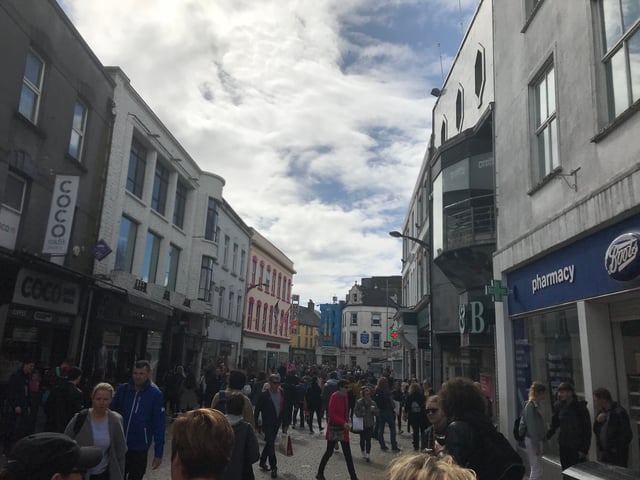 We were given two hours in Galway to find lunch for ourselves and explore. Some friends and I went to a fish and chips restaurant suggested by the bus driver, which was delicious. They offered ray (as in stingray) instead of fish, but it was a 15-minute wait to cook it, so I went with the cod instead. There was a market set up in the city center with a multitude of different food stalls, artists, and craftsmen selling their wares. My friend Rachel and I tried sea urchin, which was surprisingly palatable. 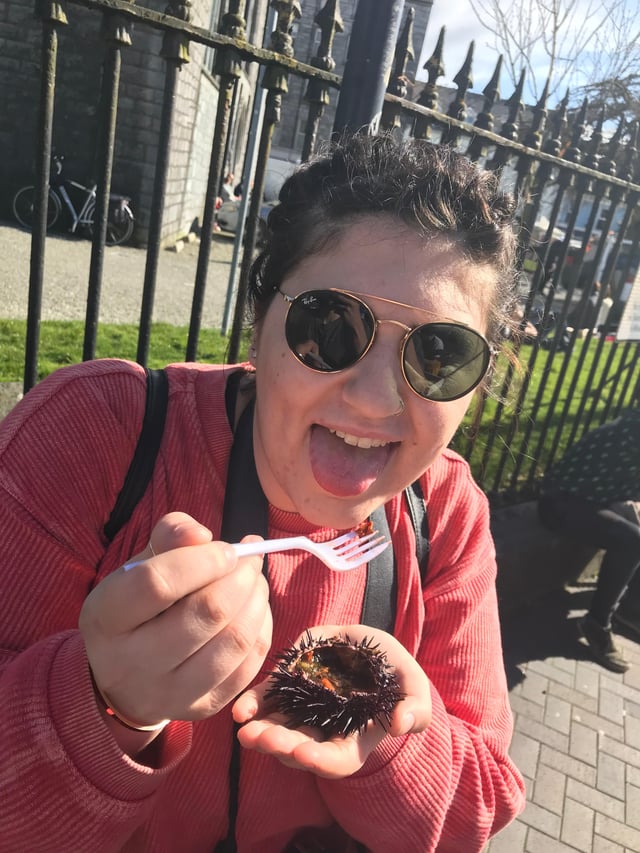 The ride home felt much faster, and I took a long nap due to being exhausted from such a full day. It was a wonderful way to spend a Saturday, and I greatly enjoyed seeing the Cliffs and walking around Galway, which I am looking to go back to sometime in May. I hope you enjoyed my blog post and have a great week!