A Successful Project to Wrap Up My Marketing Internship in Dublin

In this week's post, Casey tells us about how she ended her marketing internship with Griffith College's Alumni and Career Office in Dublin. She played a big part in planning and executing the very first Alumni Breakfast event for Griffith College. It was a success and one to be remembered! See how Casey diligently contributed to this project while coordinating with various professionals.

Thanks to CAPA, I was able to do an internship while studying in Dublin. My internship was with the Alumni and Careers Office at Griffith College, where I studied. I worked directly with Suzanna Doyle, who takes on the alumni office all on her own, with occasional help from the marketing team whom we shared an office with. The biggest project I had to work on this semester was the first ever Alumni Breakfast event.

This breakfast was a great way to network and reconnect with fellow Griffith alum, while also hearing from some speakers and giving out spot prizes. This event took a lot of time to plan, and I don’t think Suzanna and I could have done it without each other. What was great about my internship was that I didn’t feel like an intern; I felt like I had an important voice that was being listened to and valued. I was able to bounce ideas off of Suzanna and vice versa. 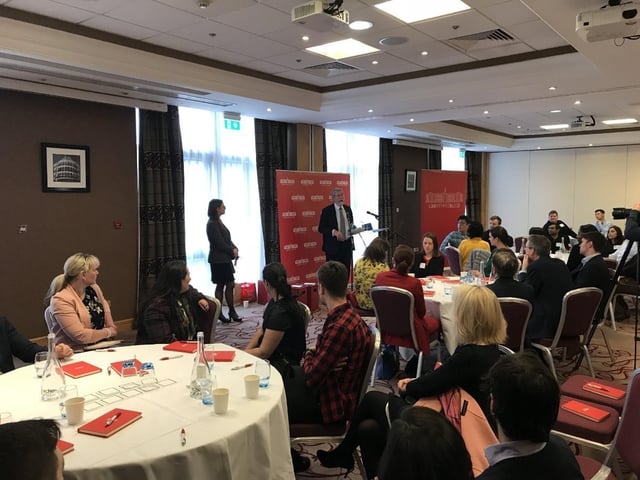 At the Griffith College Alumni Breakfast.

When planning this event, we had to send out mass emails and LinkedIn and Alumni Network posts so we could get as many people interested as possible. It took a lot of contacting people one-on-one also, because not everyone looks at those large emails. I spent most of my time asking people to register, asking if they would be interested in speaking at the event, and asking if their company would be interested in providing a gift voucher as a spot prize on the day of the event. After lots of back and forth, we finally were able to get four solid speakers: Viatel’s Paul Rellis, Conker’s Orla Veale, Newstalk’s Dave McIntyre, and O’Callaghan Collection’s Catherine Bodley.

The days leading up to the event were the most chaotic because of all the last-minute things to do. We needed to make name badges, collect the spot prizes from companies, and confirm speaker bios. I love large events like this because on the actual day, nobody at the event can see the struggles we went through—they just see all the details that went into putting the event on. 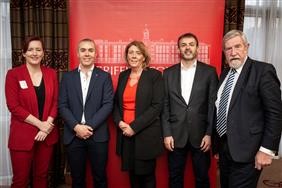 On the day we were at the Hilton Hotel in Dublin by 7:30am, the sun hadn’t even risen yet. I was in charge of all the volunteers, so we had branded pens and notebooks placed on each seat, banners hung, the registration table set up, and the gifts put into bags easily accessible for Suzanna to grab when it was time. I was stationed at the registration table for the event because it was the busiest part. I checked people in, gave them stickers to identify which faculty they graduated from, and gave them their name badges. We had around 60 people show up, which was a great turn out for the first ever Alumni Breakfast.

I went in a couple times to check in on the event, and everyone really seemed to enjoy the speakers' lightning talks and the networking tables we had set up for later. After the event, while people were leaving, my coworker and I handed out exit surveys to get feedback on the event, while I also had my computer open to an online form where they could sign up to be either a mentee or mentor in the mentorship program. The event ended a little after 10:30am.

This event was a huge success for us, and I’m grateful I got to have such a large part in it. It made me feel good that the President of Griffith College personally thanked me for my work and that Suzanna made me feel so valued during my time interning with her. It was a great internship and I’m thankful for the opportunity.