A Tale of Two Lakes: A CAPA Shanghai Excursion to Hangzhou

The first time I heard of the West Lake in Hangzhou was during our trip to Beijing. We went to the capital back in September during the first month of our study abroad experience in Shanghai.

Our program visited the Summer Palace after walking most of the day through Tiananmen Square and the Forbidden City, both political and cultural relics of China. 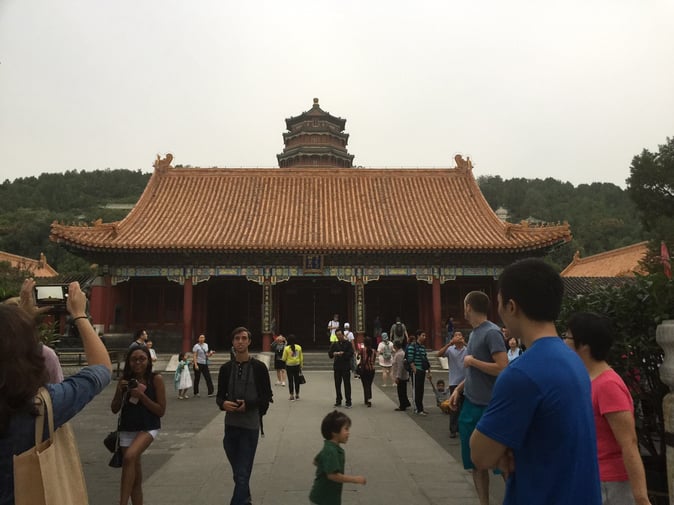 The Summer Palace was beautiful; resting adjacent to a picturesque lake that I presumed was naturally formed. Little did I know that the entire grounds of the palace were seated on the soil that was dredged up to form this man-made lake. The lake was created by workers hauling buckets of earth and depositing them nearby, surmounting in a great hill that is at the center of the Palace grounds. I wondered what the inspiration was that would drive the Emperors of ancient China to build such a place. What were they trying to replicate? It was the West Lake in Hangzhou, over 1,300 kilometers south of the Capital. 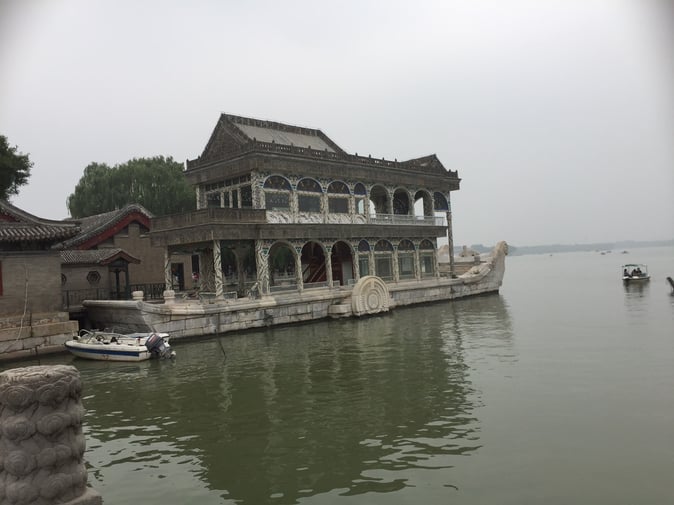 Hearing of the Lake’s beauty, and considering how the emperors of old replicated it in Beijing, I was eager to finally see the original lake. We departed from our dorm for Hangzhou around 8:30 in the morning on a Saturday, taking a high speed train from Shanghai Hongqiao Station, arriving just in time for lunch. Meeting a local friend of our program director, I was glad to have the chance to practice my Chinese and learn about the area. We headed over to restaurant near the station. There we had a family style meal chock full of local dishes including dumplings, seafood balls, meat, and vegetable dishes. There was not one thing on the table that I didn’t like, and my favorite was a peanut dish. They were soaked in a kind of vinegar sauce that made you pucker; they were so good I had to get a doggie bag to snack on them later. From the restaurant we walked through the downtown area, past a canal and some old-style residential areas. I noticed the streets were much less crowded than Shanghai or Beijing, Hangzhou being a city of only 8 million. This comparison would have shocked me before coming to China, as the closest city to my home, Baltimore, has just over half a million residents. But now, having lived in a city of 24 million for over three months, the streets of Hangzhou felt relatively unoccupied. It was somewhat refreshing. 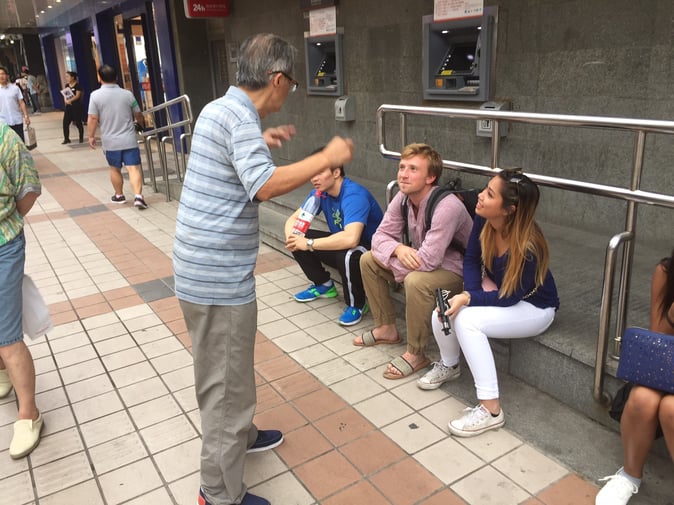 We passed Halal restaurants and western-style coffee shops, heading towards the lake. Here the crowds became denser, waiting to walk across a small arch bridge then along a zigzagged path that spanned part of the shoreline. Our group made it out onto the bridge and got a quick photo. Next to the lake shore, we saw the beautiful lake and surrounding mountains. Off in the distance to the left was a pagoda, and out on the lake there were many boats ferrying people about. We would find out where the boats would take us the following day. We ventured along the shore, walking through several parks where people were playing folk instruments, singing songs, and dancing. This is one thing I will miss about China, how the older generations fill social places with music and life. It makes me smile. 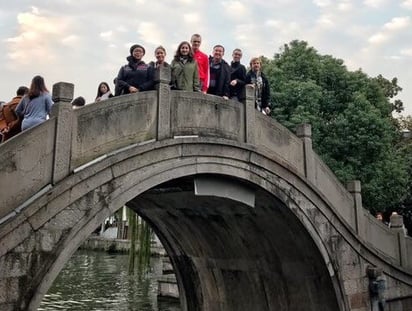 The next day we took a boat across the lake to an island where we found trees bursting with fall color encircling three small pools. The island was small and we were able to explore it in its entirety in about an hour, snapping a ton of great photos with the beautiful backdrop nature provided. Taking the same boat back to shore, a bus was waiting to take us to the next destination, one of the biggest Buddhist temples in all of China. Through a short spat of traffic around the lake, we made it to the temple grounds in good time. First we saw Buddhas carved into a cliff face; I estimate there were as many as 20 of them strewn about the rock. A placard revealed that some of them were over 1,000 years old. I enjoyed this place because it was truly ancient, whereas in some other tourist destinations, the structures I found had been reconstructed within the last 20 years or so, as were the temples that we would see next, which were rebuilt during the 1990s. Still they were a sight to behold, housing massive Buddhas and occupied by the devoted. We burned incense, explored the temples, and headed back on the bus to our final stop in our tour of Hangzhou. 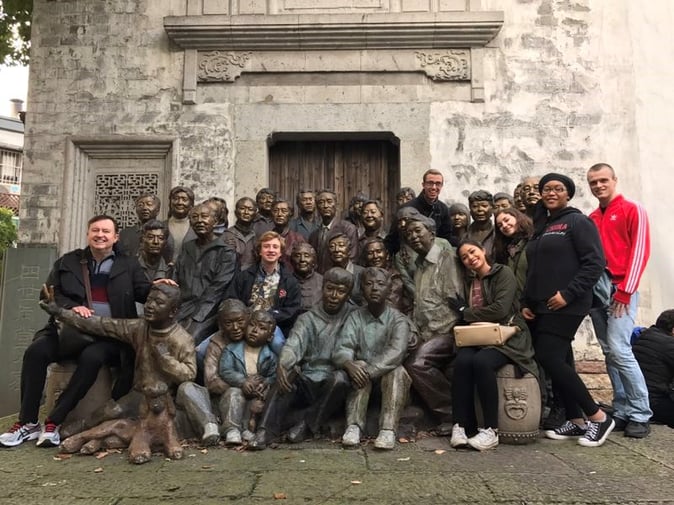 The Ancient Cultural Street that our director took us to reminded me a lot of the area surrounding the Yu Gardens in Shanghai. Full of handicrafts and local treasures, this place was also crowded with tourists, even a few westerners. I tried to stay off the crowded main street, so I stuck with our local friend Tom for this part of the trip. He took me into some traditional Chinese medicine stores, which I found fascinating. They had a barrel of free tea and boxes upon boxes of natural remedies. People sipped tea and discussed with the shop’s proprietors (who wore white lab coats like doctors) about their ailments and such. I did not dabble in any of the cures, though. Maybe the next time I am in China I will. We left the cultural street late that evening and began our journey back to Shanghai. 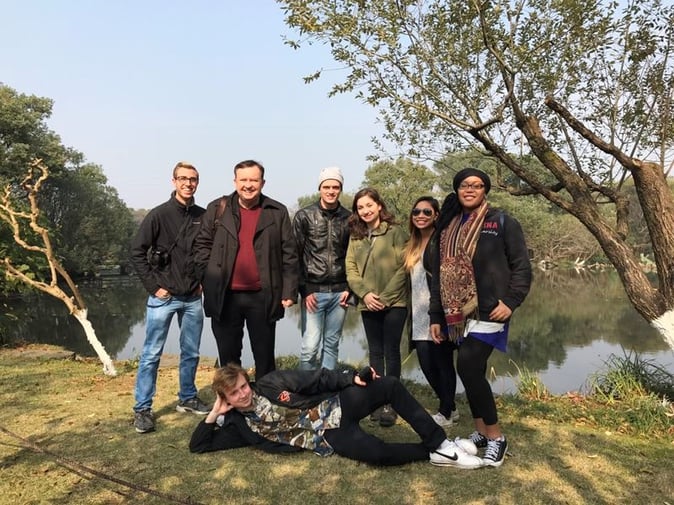 It had been a long day, and the bus ride back was relaxing. I reflected on the city and our activities there. It would be a great place to do some personal travel and really get a feel for the town. To me it seemed the people there were in less of a hurry than Shanghai, where the streets and metro lines are full of the daily rush hour drama. Having run the gauntlet of rush hour transportation in Shanghai, Hangzhou was a welcomed break. I enjoyed the trip very much and hope to go back in the future.

For another perspective on the group's trip to Hangzhou, check out official CAPA Shanghai blogger Caleb's post too.