A Trip to Estancia Don Silvano

In this week's post, Elizabeth takes us to an estancia (ranch) to watch a horse show and tango at dinner.

This past weekend I attended one of CAPA’s global education events-- a trip to an Estancia!  Argentina has a long and interesting agricultural history, and so I was excited to experience first-hand some of the food, sports, dances, and customs associated with the folkloric ‘gaucho’ lifestyle.  After Spanish colonization much of Argentina, particularly a region called the ‘Pampas’, was used for ranches and farming.  The gaucho is a ranch worker, usually a migratory and highly-skilled horseman.  The gaucho way of life is associated with freedom and strength, and is canonized as a national symbol in much of Latin American art and literature.  To this day, Argentina has a notably large beef industry, and gaucho culture lives on in many aspects of national identity and  practices.  As the bus carried my classmates and I further and further along open, green fields, I looked forward to a day of eating steak and riding horses.

Photo: during the horseshow

The morning began with a delicious ground beef empanada.  Empanadas are stuffed pastries, usually filled with meat or cheese.  I’m happy to report that I’ve eaten quite a few during my stay here, and the empanadas at the Estancia were particularly delicious and filling-- the perfect fuel for my day of pretending to be a gaucho.

After breakfast it was time for a horseback ride through gorgeous pastures, where I caught a glimpse of some of the other livestock kept on the estancia: chicken, donkeys, rabbits, and more. I especially liked the beautiful black mare I rode.  She had a young foal trailing alongside her for the ride, and watching the horses respond to each other and to the orders of our tour guides was really fascinating.  The skillful communication between the estancia gauchos and the horses was visible and impressive, but it wasn’t until later in the day that I had a chance to see the full extent of their horsemanship. 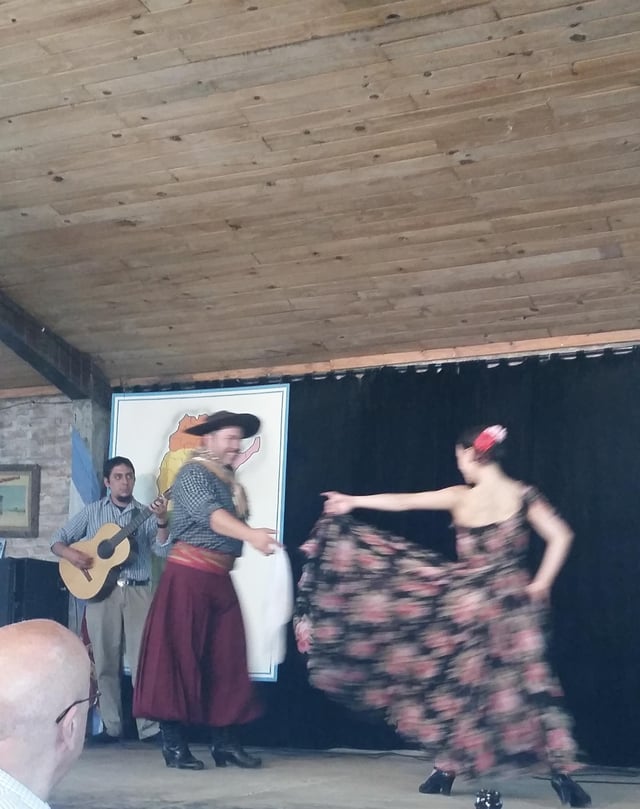 When the ride was over, I had a chance to share in one of the river-plate region’s healthiest traditions-- sharing mate.  Mate refers to the dried leaves of the yerba mate plant, as well as to the popular beverage of the river-plate region (it’s the national beverage of Argentina!).  It was originally used by the indigenous Guarani and Tupi people, and became a popular commodity after Spanish colonization.  Sharing mate is an important cultural practice with its own unique etiquette.  Many people take turns sharing from the same mate cup, drinking a full cup one at a time.  It’s typically served hot, and sometimes sugar is added.  It has a distinct flavor that I really enjoyed-- it kind of tastes like a strong, earthy green tea. 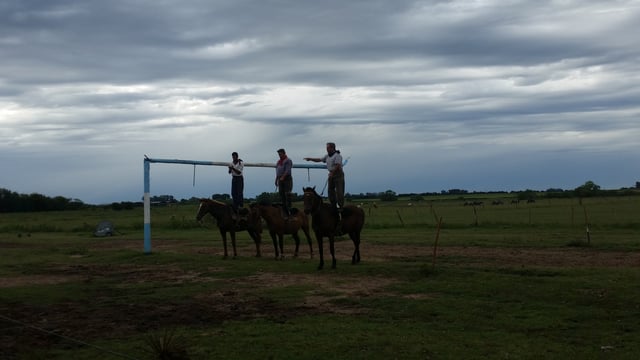 Photo: taking a bow after the horseshow

Dinner at the estancia was a wide assortment of delicious meats: blood sausage, chicken, pork, and finally, lots and lots of steak. Live, traditional music and dancing took place during dinner, and I even got to try my hand (or rather, feet) at a little tango.  It was really difficult, but luckily my partner was a pro.  Afterwards, all the guests watched as the estancia’s gauchos competed in several horseback riding competitions.  The main event involved racing through a metal underpass where three small rings were suspended on hooks.  Whoever was able to catch one of the rings by aiming a stick through it was the winner, and, as is custom, gets to present the ring to a woman and get a kiss in return.  If the woman was married, her husband also had to kiss the gaucho’s horse!  It was incredible to watch the gauchos show off their skills, and the kisses seemed to be enjoyed by all. 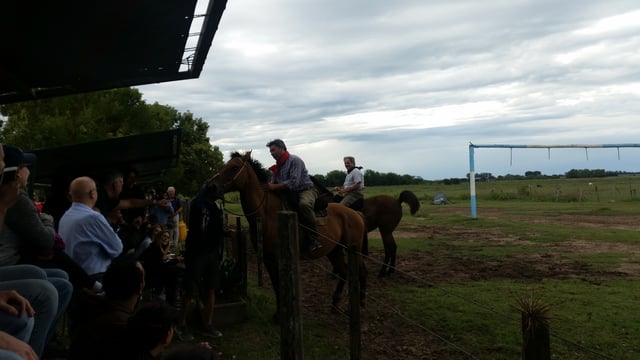