A Trip to Salta: Seeing Salinas and More

In this week's post, Elizabeth takes a trip to Saltas to see the nearby salt mines and incredible mountain views.

This past week I left Buenos Aires yet again, this time headed North for sun, mountains, and fields of salt.  My friends and I flew to Salta, a city close to the border of Chile and Bolivia, for a week of hiking, exploring, and lots of eating.  Salta is well-known for traditional food, colorful markets, folklore and Andean music, and views of the surrounding Andes mountain range.  One of the main attractions is a mountain peak with cable-carts and hiking trails leading to the top, where there are breath-taking views of the city.  We didn’t stay very long in Salta, though, because there was too much to do and see in the picturesque towns surrounding the area. 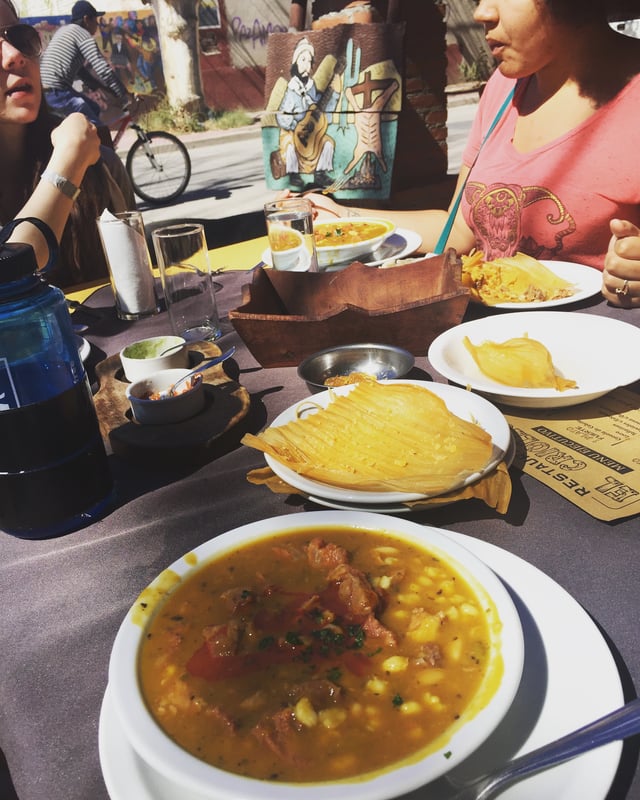 Photo: our meal of tamales and locro

As soon as I stepped out of Salta’s airport I felt the dramatic difference from Buenos Aires.  The air was hot and acrid, tinged with the smell of the red dust kicked up by passing trucks and motorcycles.  Palm trees and cacti lined the road and stood out against the red and purple mountains and the clear, wide sky.  As we rode the colectivo to the city center I noticed the differences in the buildings as well-- low to the ground, with smooth plaster walls and clay-colored tiles on the roof-- nothing at all like the skyscrapers of Buenos Aires. 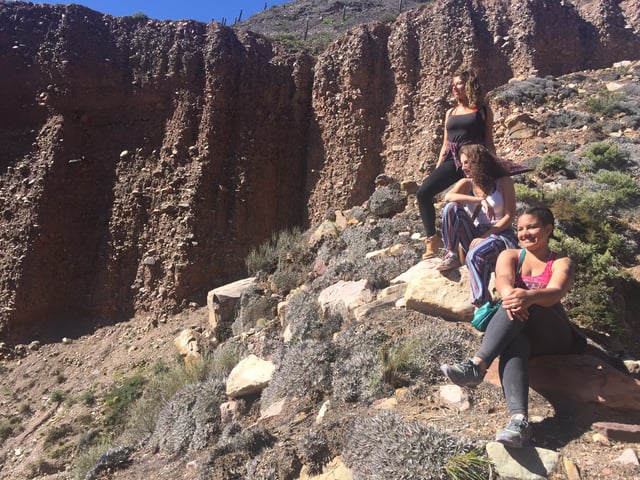 Photo: a view from the hike Caption

We left the next day for a bus tour of Cafayate, a town just South of Salta.  Along the way I got to learn a little about the area.  In prehistoric times it was a sea-bed, and fossils are embedded in the mountains.  (I saw streaks of light green in many of the rocks-- turns out they were seaweed fossils!)  We drove past interesting rock formations, many of them named after their unusual shapes-- priest, frog, titanic, and more.  There were spectacular sights all around, but my favorite was the rare spotting of nearly a dozen condors, circling high above the mountains. 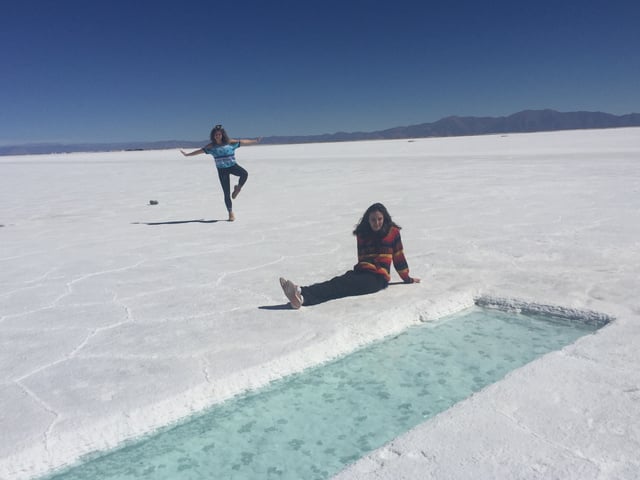 Photo: at the Salinas Caption

There were also market stalls set up along the paths into the mountains, and I browsed through beautiful hand-made pottery pieces and jewelry, and bought myself a delicious cheese tortilla, fresh from a clay oven.  Later, in town, I ate tamales and locro, which is a thick pumpkin stew with potatoes, white beans, corn, and chunks of beef.  Dessert was a thin slice of cheese covered with thick honey.  Needless to say, I left Cafayate happy and stuffed. 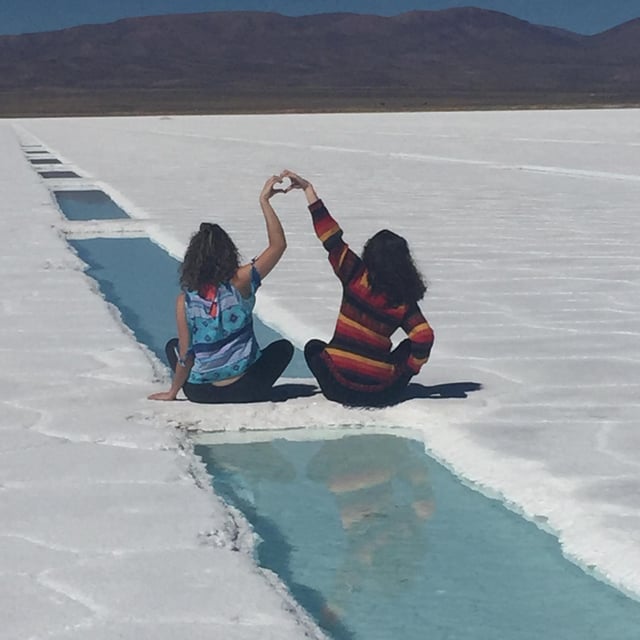 Photo: more fun at the Salinas

From Purmamarca, another town further north, I caught a bus to the Salinas Grandes to see the roughly 212 sq. km fields of salt.  The bus sped along a steep, winding path and brought us to the highest peak of the mountain.  It was dizzying, and really stunning, and along the way down I watched as the shimmering expanse of salt mines grew larger and larger.  The Salinas are dazzlingly white, and flat, and stretch for miles between the mountains.  When it rains, they’re almost completely reflective, but the day I visited was very dry, and I could see the cracks and ridges that form an almost hexagonal pattern in the salt.  There are rectangular trenches filled with clear, blue water, which evaporates to form clean, ready-to-mine salt.  One of my favorite things about the Salinas was the picture-taking possibilities.  Since it’s so flat, it’s a common tourist spot for taking goofy pictures, which I definitely attempted (with little success).

That’s all for now, thanks!