A Visit to MALBA in Buenos Aires

In this week's post, Elizabeth visits the Museo de Arte Latinoamericano de Buenos Aires, and tells us about some pieces of art she saw.

This week I finally visited one of Buenos Aires’ most famous attractions, the Museo de Arte Latinoamericano de Buenos Aires. MALBA was opened in 2001, and is known for displaying some of Latin America’s most prominent and culturally significant art pieces, although it has some international exhibits as well.  Having taken, through CAPA, a course on Art in Latin America, I was thrilled to not just recognize some works and artists, but to actually understand the cultural, philosophical, and political context behind.  As much as I love visiting museums, this was the first time I really felt I understood something about the art beyond just a kind of immediate emotional response. Thanks to Buenos Aires, I can finally feel smugly cultured in an art museum! 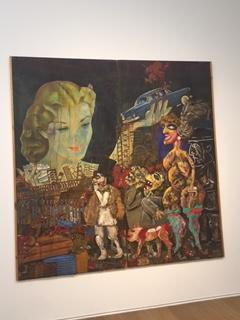 The museum’s exterior was striking, especially when seen after walking past blocks and blocks of Buenos Aires’ close, towering, ornate, European-Colonial style buildings. MALBA is very modern-looking and open, a set of block-like like structures, tiled either in light beige or glass. The blocks seem to be layered over each other and intersect at odd angles, and the resulting impression is a bit like an understated cubist painting come to life. When I visited, a large section of the building was covered in an identical series of pop-art posters reading ‘AIDS’ in primary-color block letters. This was advertising part of the international exhibit on MALBA’s top floor- a huge public AIDS awareness piece from the 1980’s by the Canadian art group, General Idea. 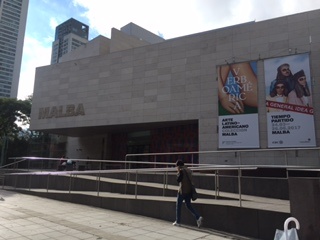 I believe the work by General Idea was the only non-Latin American art I saw at MALBA, and the entire top floor was dedicated to their unique, subversive, and often controversial pieces. The group was composed of three artists, Felix Partz, Jorge Zontal, and AA Bronson. Although the three were Canadian, Jorge Zontal grew up in Venezuela, and there were some interesting ties to Latin America in a few of their pieces. One that I especially liked was a conceptual art piece of a series of abstract, 3-dimensional wall-hangings. There were about 10 of them, and they were all large and almost identical and hung like paintings. They were a rough, bumpy surface of every shade of brown and beige, about three inches thick. 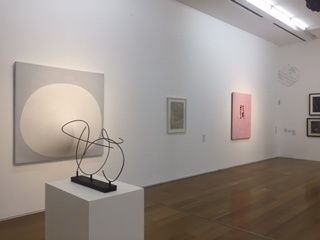 I didn’t quite know what I was looking at until I read the title, and learned that each piece in the series had the name of a different section of a Mexican Casta painting. Casta Paintings were common in the Spanish colonies, and served as an illustration of the racial caste system imposed by Spanish conquerors as they colonized, oppressed, and often had children with, Native and African populations. Much of the other work of General Idea focused on LGBT rights and expression, as well as addressing the AIDS crisis. As I mentioned, the ‘AIDS’ logo was plastered along the museum’s exterior, and along one of the hallways inside was a wall covered with inflated blue pills, representing AZT Treatment. Both Jorge Zontal and Felix Partz died due to AIDS in 1994. 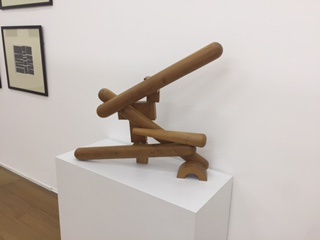 As I mentioned, the rest of the art I saw was Latin American, and I was excited to see famous pieces by Antonio Berni, Xul Solar (whom I wrote about in an earlier blog), Tarsila do Amaral, Gyula Kosice, Enio Iommi, and many others. Kosice and Iommi were both founders of the Concrete-Invention Art Association, and created an entirely new style and philosophy of conceptual art, in which art wasn’t a representation of something in the physical world, but rather an abstract world of its own. Some of their most famous sculptures-- Kosice’s articulated (meaning people can move it into different shapes and positions) wooden Royi and Iommi’s metal ‘Direcciones’, a sculpture of intersecting lines. There were a wide range of pieces by Antonio Berni, an Argentine artist whose painting career began at the age of nine and transformed stylistically and conceptually many, many times. Some of my favorites were his trash collages, which depict the horrors of poverty and inequality.

All in all, the museum was fantastic, and one of my favorite places I’ve seen in Buenos Aires. Thanks for reading!