A Visit to the Museo Nacional de Bellas Artes

In this week's post, Elizabeth brings us to the Museo Nacional de Bellas Artes to see an exibit on Argentine artist Xul Solar.

It’s hard to believe it’s been six weeks already! Time seems to be flying by, and everything still feels new, and unfamiliar, and exciting. And I can’t stop finding new things to explore. My classes are partly to thank for that-- a few of my professors regularly post news about events going on in the city, and my classwork and homework sometimes involve excursions of some kind. This week I visited the Museo Nacional de Bellas Artes for an assignment in my Art and Politics in Latin America class. I came to see the museum’s new temporary exhibit on the fascinating Argentine artist, Xul Solar, but the permanent exhibits were definitely worth a visit as well. 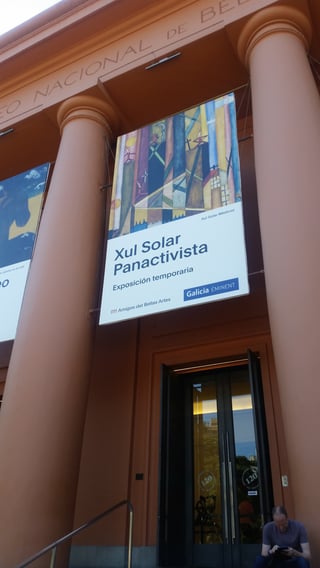 The MNBA was first opened in 1895, and moved to its present location in 1933. It’s an impressive building, clay-colored with a row of columns in the front and a vast, winding interior, so it’s hard to believe it was originally a drainage pumping station. The MNBA has collections from a wide range of artistic movements and works from all over the world. I noticed, though, that most of the pieces I saw were from French Impressionism, Avant-Garde, and Modern and Post-Modern, and were either European or Latin American. This is significant because much of Latin American art has some roots in European traditions. Famous Latin American artists like Antonio Berni, Tarsila do Amaral, and Joaquin Torres Garcia initiallystudied art in Europe. However, most eventually abandoned European styles, creating entirely new, unique, and hugely influential artistic movements. 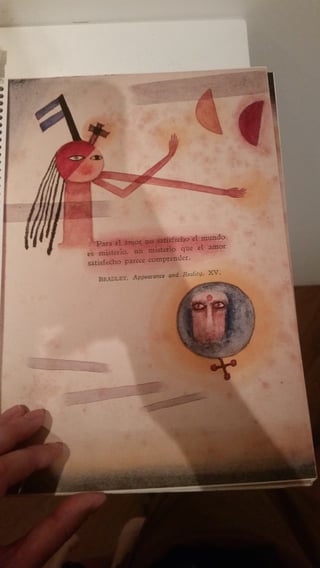 Photo: One of Xul Solar's Illustrations

My visit, though, was first and foremost to see the Xul Solar exhibit. (There are only about 5 of his paintings displayed permanently at MNBA). The exhibit was huge, and featured much more than just paintings. Xul Solar worked primarily as an astrologist, and the exhibit displayed many of the natal charts he drew. My favorite was the one he drew for his lifelong friend (and one of the few buyers of his art during his lifetime), Jorge Luis Borges. Solar also illustrated some of Borges’ writing, and copies were available to flip through. 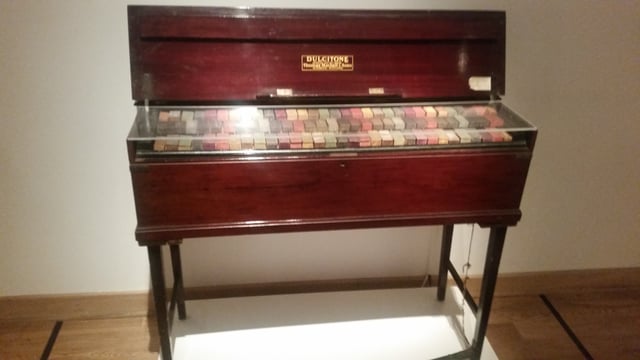 Xul Solar was interested in esoteric knowledge from cultures all across the world, and incorporated many religious and astrological symbols, systems of writing, and musical notation into his art. In addition to painting, he invented a piano keyboard with three rows of differently colored and textured keys, as well as a new system of musical notation. One of his pianos was on display. It was off-limits to play, but apparently during his lifetime his wife played quite often. Solar was also an inventor of languages. One, Neo-Criollo, is a blend of Spanish and Portuguese, and people fluent in both have been able to understand his Neo-Criollo writings quite easily. The other, Pan-Lingua, is a universal language rooted in art, astronomy, music, and mathematics. Only Solar could understand it, however, a board game he invented (called “non-chess”) allows the player to create words and meanings in Pan-Lingua as he plays. The game was on display, too. Solar used to play with his friends, especially Borges, but now there’s no one left who knows the game’s intricate rules. 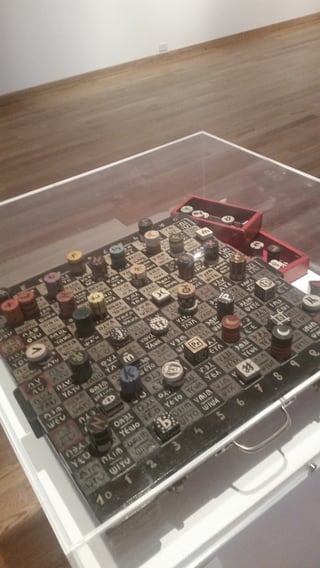 Visiting the museum was fascinating. The Xul Solar exhibit was one of the most interesting collection of art I’ve ever seen, I loved the lay-out of the museum in general, because each room seemed to tell a story about a particular period in art, and often in Latin American political and cultural history. Thanks for reading!