A Weekend in Uruguay: Punta del Este and Casapueblo

In this week's post, Elizabeth takes a trip to Punta del Este in Uruguay, where she enjoys the beach and the last moments of summer.

Temperatures are dropping slowly but steadily here, and soon it’ll be too cool to wear the shorts and sundresses I packed, or sunbathe in the plazas.  So this weekend, I decided to make the most of the fading heat and head for the beach!  There are beaches south of Buenos Aires, but many people here opt for a vacation along the coast of Uruguay, just a short ferry ride away.  I chose to stay in Punta del Este, a tourist hotspot known for its unique landmarks and strong waves. Photo: the shores of Colonia from the ferry

To get to Punta del Este, I took the ferry from Buenos Aires to Colonia (another Uruguayan city I hope to visit soon!) and then caught a bus.  The ferry ride was spectacular.  I got to see the sunset over the Rio de la Plata, and watch as boats and barges passed by.  The bus ride to Punta del Este was about as cramped and stuffy as any other five hour bus ride, but it was interesting to see the different landscapes of Uruguay-- enormous flat plains dotted with horses, or herds of cows or sheep, rows of low, square homes and shops, vast forests of what looked to me (no tree expert!) like evergreens, and finally, mountains.  My favorite part of the ride, though, was that driving through some of the darkest fields I could see, for the first time in a very long time, a sky full of stars. 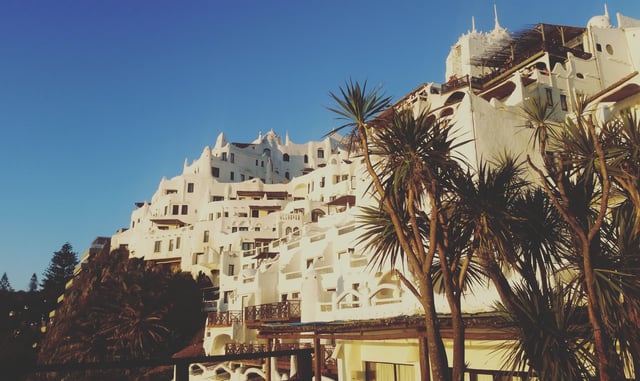 The beach house I stayed in was gorgeous, and had a backyard full of flowers and palm trees and even a parrot or two!  My first stop was to bikini beach, one of the more popular destinations for tourists and young people.  Punta del Este has two sides, ‘mansa’ and ‘brava’ (tame and fierce).  I was on the brava side for the duration of my stay, and it lives up to its name.  The waves were strong, and easily pulled me out pretty far.  Later I learned that that had been a calm day-- the waves on the last day of my stay were so strong they knocked me over, flipped me upside down, and dragged me back to shore within about 3 minutes of getting in the water.  But for most of the week, the ocean was warm and fairly calm, and the water and sand beautiful and clear.  When the water was rougher, I could see surfers, kayakers, and kite-surfers riding the waves, all from my spot in the sand where I sat playing with dogs (the beach was full of dogs) and collecting colorful seashells. 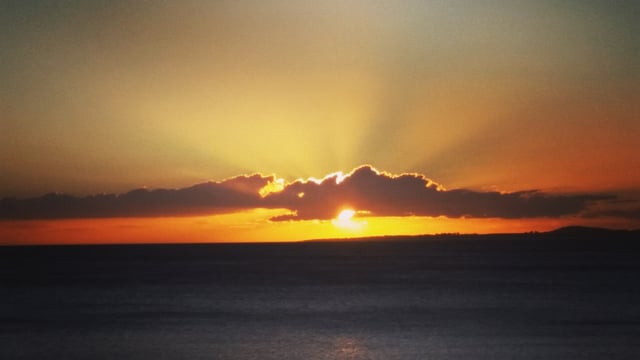 Photo: the sunset over the water at Casapueblo

One of Punta del Este’s most unique landmarks is Casapueblo, a hotel, museum, and art gallery.   It was built by Uruguayan artist, sculptor, architect, writer, and composer Carlos Paez Vilaro.  I hadn’t known that I was familiar with any of his works, but he is the artist of an unforgetable mural I’d seen in Buenos Aires.  Casapueblo is unbelievable.  It was built by hand, by Paez Vilaro, out of wood and white cement and stucco.  The building is an enormous, bright white labyrinth formed along the side of a cliff.  It has no straight lines, as the artist wanted it to have a natural, human feel, and to resemble the mud nests of Uruguay’s hornero birds.  Inside Casapueblo, Paez Vilaro’s art work, along with others’, is displayed, a documentary about his life plays, and his sculptures and paintings, especially of the sun, can be found along the walls.  After hours of exploring, I climbed down to a grassy spot on the cliff where I could watch the sun set over the ocean.  Behind me I could hear one of Casapueblo’s daily traditions-- the Ceremony of the Sun.  A voice recording of Carlos Paez Vilaro reads a farewell poem to the sun, just before it sinks below the horizon. 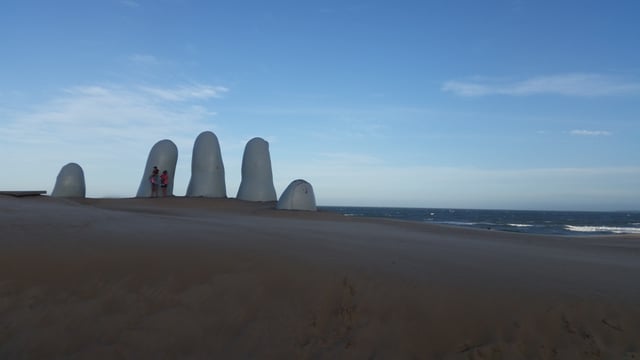 Photo: another landmark in Punta del Este, La Mano, separates the brava from the mansa side