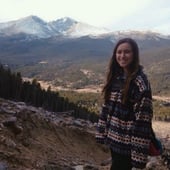 In this week's post, Courtney talks about her spontaneous trip to Palma de Mallorca in Spain.

This past weekend, my friend Caroline and I traveled to a little Spanish island called Palma de Mallorca. It was a completely spontaneous trip; we decided just a few days before that we wanted to get away for the weekend to some place sunny. London is beautiful and fantastic, don’t get me wrong, but the weather can be a bit of a downer at times, so the beach was definitely calling to us. I had never been to Spain before, so this was a new and very exciting experience for me.

Palma is absolutely gorgeous. The weather was beautiful when we were there; it was too cold to swim and it was a bit chilly in the shade sometimes, but in the sun it was perfect because it was warm with a bit of breeze. Spain is completely different from London in every way, so it was nice to have a really different experience from what I’ve gotten used to. I was a bit worried about being able to communicate with people in the island, because even though I took some Spanish in middle and high school, I’m not very good at it. Thankfully Palma is a touristy town so a lot of people there understood English.

I loved being there during the off-season, which is something most people wouldn’t typically think of doing. It was very quiet while we were there, but I’m sure it’s wild during the summer because a lot of cruises stop there. It was lovely to get away from the hustle and bustle of London, which I think is truly the city that never sleeps. Siestas are a fantastic part of Spanish culture as well, as from around 2-5pm most businesses close and everyone goes home to take naps. I had heard about this before, but I didn’t realize that it meant that there is legitimately no one out at this time. I’d definitely love to live in a place where everyone takes naps at the same time! Everyone seems a lot more relaxed and happy living this lifestyle.

The food in Spain was incredible as well. Most restaurants pride themselves on their tapas (small plates) and sangria, and everything is much cheaper than London, which was really nice. I’d recommend “patatas bravas” (a popular Spanish dish consisting of baked potatoes smothered in spicy red sauce and some sort of white sauce) to anyone who visits Spain because they are absolutely delicious.

This weekend was honestly one of the most relaxing, happiest times of my life. Caroline and I went for a long bike ride on Saturday because there is a really long bike trail that basically wraps around the entire island, and it felt almost therapeutic to have the wind blowing through my hair and the sun warming up my skin as I rode between the beach and colorful buildings. Our hostel was fantastic because it had an amazing rooftop terrace which looked out upon the entire island. We were located right next to the Palma Cathedral, which is one of the most gorgeous buildings I have ever seen. Each night we were there, Caroline and I would go up to the rooftop and watch the sunset. Palma also has beautiful mountains with a castle on top, which is something I would like to hike to if I ever return, as we didn’t have enough time to go there too.

Palma was completely different from London, and it was nice to be exposed to a different culture for a little bit. I will always remember this spontaneous trip as one of the best weekends of my life, and I would highly recommend anyone visiting Europe to take a trip to Palma de Mallorca as well! To me it was a hidden gem that ended up being one of the most beautiful places I have ever visited.