The Attraction of the Jazz Joints

By and large, jazz has always been like the kind of a man you wouldn't want your daughter to associate with.
—Duke Ellington

Jazz is the language of the emotions.
—Charles Mingus

I spent a good deal of my mildly reprehensible youth listening to jazz in places where I was not supposed to be—predominantly in Soho in Central London. From about the age of 14, in the early 1960s, I began a lifelong love affair with jazz—not just the sounds but with the places in which it was played and the people who played it. 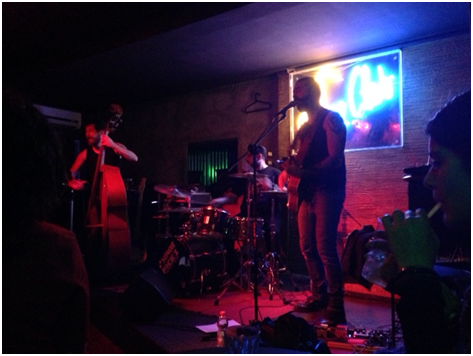 Soho has become gentrified in these days and few of the old, smoky subterranean jazz joints remain; none of them are smoky now of course and most have become boutiques or perfume shops—ironically sweet fragrances have replaced the heady mixture of sweat and tobacco. The most famous is Ronnie Scott’s jazz club but it has been deformed into a corporate “venue” for tourists and visiting business types (but at least it’s there, even if hideously expensively and much altered in ethos). These were refuges from respectability.

They were populated by heroes. Ronnie Scott was one of them and I got to know him slightly. He had famous lines that he repeated nightly (often completed by the waiters before he could finish them). I fondly recall, by way of example, “Last night we were so bad that the bouncers threw the audience in” and “When I want your opinion, I’ll give it to you.” Ronnie was sadly to commit suicide when he lost the ability to play the saxophone. Then there was the mordant, silent morose Pete King; the remarkably dignified Johnny Dankworth; the silken voice of Dankworth’s wife, Cleo Laine; the great Don Rendell who, on one majestic evening, was playing a saxophone solo, eyes closed as always, when a critical dog wandered over and vomited on his suede shoes; the tragic Tubby Hayes, a larger-than-life figure who died too young through an excess of everything (emulating his American hero, the giant Charlie Parker).

The figures I listened to and watched mirrored (sometimes imitated) legendary Americans such as the Adderley brothers, Cannonball and Nat (“To the Lighthouse” was the first record I ever owned, bought with coins I “liberated” from the small change my taxi-driver father collected.) There were other American titans: Dizzy Gillespie, Charlie Parker, Miles Davis, Art Blakely, Thelonious Monk, John Coltrane, Charles Mingus … I could go on for a long time with a pantheon of the giants I worshipped.

These figures, it now occurs to me, connected me to lifestyles that were seductive because they were beyond anything I could possibly experience in the mundane respectability and conformity expected of a “nice Jewish boy”—the role for which I was being trained by parents, grandparents, and community “police” (such as my Aunt Betsy).

They represented the attraction of dangerous and seductive non-conformity; renegades and rebels who embodied a form of liberation from respectability that I could barely imagine, although I yearned for it. I also now realize that this was the beginning of my engagement with a version of America. Most (not all) of these great musicians were black and many were subject to discrimination and segregation. Some of them went to Europe to escape oppressive racism. They also stood for a manifestation of “outlaw” American art that challenged prejudice and racism. In that respect, they were also connected to the literature I studied and loved: voices that were simultaneously marginal and essential.

I am not writing this simply to reminisce nostalgically about my own obsessional past. Jazz is connected to the work of education abroad both literally and metaphorically.

What We Can Learn from Jazz: Understanding Places

Jazz is known all over the world as an American musical art form and that’s it. No America, no jazz.
—Art Blakey

I'm playing dark history. It's beyond black. I'm dealing with the dark things of the cosmos.
—Sun Ra

On the literal level, jazz in Europe signifies Europe’s fascination with America. For many Americans (including our students), Europe is a magnet; it represents an alternative space characterized by forms of historical density, complexity, and sophistication (think of Henry James, or even Henry Miller). That attraction is by no means only one way. Europeans first dreamed a version of America that offered the potential of freedom from restrictive traditions and structures of government and credos. American jazz belongs to that tradition and illustrates that one of the attractions of education abroad is the pursuit of alternative spaces and values—broadening, as the cliché suggests, horizons beyond the familiar.

Jazz also suggests that the history of music offers a means of understanding other places in significant ways. In America, there are two paradoxical narratives. The experience of black musicians demonstrates an oppressive history of racial discrimination; the work of those musicians also illustrates the transcendence of that history through the power of art. In the study of popular culture in any context, music offers significant insights into social and political development. What, for example, does the rise of the Beatles signify in the context of a changing Britain in the 1960s and 70s? At least, they exemplify an emerging counter culture—provincial, working class, non-conformist (less so than the Rolling Stones perhaps). More esoterically, what does Hitler’s admiration for Wagner say about Nazi ideology? The connection to Germanic myths is all too apparent.

In a literal sense then music is connected to national and transnational identity: a means of illuminating areas of investigation for students aspiring to understand more about the places in which they study.

What Can We Learn from Jazz: A Model for Communication

The most important thing I look for in a musician is whether he knows how to listen.
—Duke Ellington

Jazz, like all music, is a form of communication. Obviously, it intends to evoke thought and emotions in the audience. However, jazz is also made in a manner that offers a model of good conversation: at best, a form of “safe space” in which diverse perspectives are expressed, respected and, ultimately, combined into some form of harmonious whole.

The essence of effective and creative interaction in any context, classroom and employment environment, is that there is a process of speaking and, crucially, listening, responding with respect based on attention to the voice of others. Jazz, exceptionally, embeds this approach in the creative process. A recurrent structure is that the band plays an initial theme. Then one by one, the musicians offer a solo, an individual’s improvised interpretation of the theme during which the others listen and, in turn, respond with alternative versions based around what has preceded their contribution.

This is a metaphor for the professional, academic, and personal skills we seek to teach our students. Speaking, listening creatively, and responding respectfully to the points of view of others is at the heart of good communication in any context. Watching a good jazz band live precisely demonstrates the parallel. Each individual has to listen to what the speaker/musician is saying/playing. There comes a logical point, when that individual concludes their contribution and another participant comments, introduces new ideas, and finishes when the idea is explored as well as it can be. Towards the end of the piece, the ensemble will revisit the opening theme together.

Certainly, differences of interpretation will emerge and will be sustained rather than dismissed or ignored precisely because, as we know, there is value in diversity of views. If every individual played the same thing, we would swiftly tire of the process. The art is in creating a “safe space” in which diversity is welcome.

What We Can Learn from Jazz: Conclusion—Globalization of Art

Jazz to me is a living music. It's a music that since its beginning has expressed the feelings, the dreams, hopes, of the people.
—Dexter Gordon

In my youth, it was almost impossible to hear the great American jazz musicians live without going to America (which was about as likely as going to the moon). Restrictions on the mobility of musicians were legal and financial. As a consequence, European jazz developed styles that were reflective of the American forms but were also increasingly distinctive. Great jazz could be heard in London, Paris, Berlin as well as in New York and Chicago. One of the consequences of what we think of as globalization has, of course, been increasing mobility. Legal and financial restrictions progressively eroded, and musicians traveled to perform all over the world.

It even became a form of soft diplomacy. The US State Department sponsored US performances by such as Dizzy Gillespie, Louis Armstrong, and Dave Brubeck in the Soviet Union and the Eastern Bloc from the late 1950s onwards. Similar tours occurred in Asia and Africa. The US government intention was to promote America as a land of creative freedom (that irony did not escape those black musicians who were subject to discrimination at home).

Whatever the political intention, the increasing mobility of jazz musicians into and from many parts of the world has significantly internationalized the art form. The origins in US society remain but it is possible now to hear great jazz almost everywhere. In May, in an unlikely location in Venice, steps from the Ca D’Oro (built in 1428), I heard a European jazz band (Italian musicians) in a somewhat grimy club play a remarkable set as a homage to Miles Davis. They took that American icon’s music and reinterpreted it in a manner that retained connection while owning it as something special to themselves.

All that jazz is relevant to our work; to our understanding of national identities; as a model of how we might speak to and listen to each other; as symptom of the globalization of art. It also, and this is the least important thing I want to say, reconnects me to where I came from and to where I travelled, along a route that has enriched my life. The importance of jazz to me personally and to what we are trying to achieve in education abroad is perhaps best expressed by Wynton Marsalis:

As long as there is democracy, there will be people wanting to play jazz because nothing else will ever so perfectly capture the democratic process in sound. Jazz means working things out musically with other people. You have to listen to other musicians and play with them even if you don’t agree with what they’re playing. It teaches you the very opposite of racism and anti-Semitism. It teaches you that the world is big enough to accommodate us all.