An Interview with My Ganzo! Family

What better way to learn about Florence than by turning to the locals? In this week's post, Payton interviews Giacomo, Sabrina, and Bianca from her Ganzo! family in Florence and gets their perspective on Florentine culture, food, things to do in the city, and cultural insights.

At this point in the semester, I feel like I’ve gotten to know my Ganzo! family pretty well, and, since they speak such good English, I thought I’d ask them a few questions for my blog this week and get some perspective on things from the locals here. To jog your memory: Giacomo and Sabrina, the parents, are both journalists, and Bianca is their 16-year-old daughter. Gregorio, the 13-year old son, decided to sit this one out. Here are some of the things we discussed during my last visit, over a huge pan of tiramisu that Sabrina made (she may have caught on that it’s my favorite!) 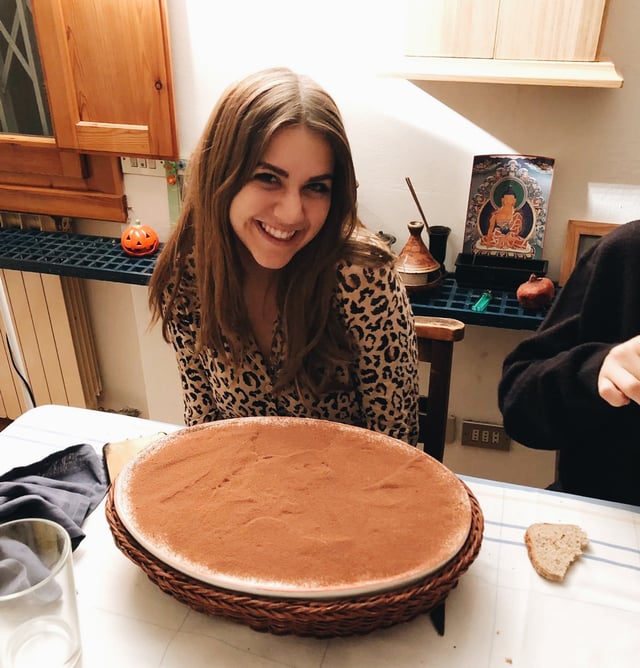 Tiramisu (my favorite) made by Sabrina.

Payton: What is your favorite part about living in/near Florence?
Bianca: I really like Florence because it’s not like Milan or Rome, it’s not that big of a city so it’s really friendly I guess, and it’s also a really sentimental city so everything’s small and cute. And also I really like that it’s full of art, that’s something that I like.
Sabrina: For me, it’s that it’s so beautiful. I mean, I used to live in a very ugly part of Milan so living in this beautiful place, it’s amazing because I think that it’s important for our life—beauty. It makes us feel better.
Giacomo: I think that Florence is a beautiful town, but also it gives us the chance to have the country[side] very, very close, so we can live a very beautiful life. So, I think that this combination is a perfect mix for us. 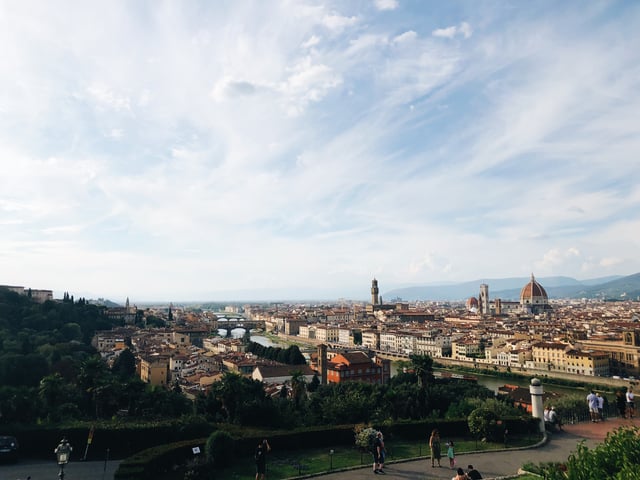 The perfect combo of country and city as observed from Piazzale Michelangelo.

Payton: What is your favorite time of year in Florence?
Bianca: I think Christmas, but I like Christmas in general. It’s really pretty in Florence because they put on all the lights in the streets and there’s this—I don’t know if they put up the tree already—but they put up this beautiful big tree in the Piazza Del Duomo, and that’s really beautiful. I really like it. And, also, they do the Christmas market in Santa Croce, and it’s so cute.
Sabrina: I think I like Spring the most because of all the flowers and you walk around and you can smell the scents and they’re so incredible... jasmine and I don’t know the other names... but they’re incredible, really incredible.
Giacomo: I prefer June because the days are long, so when you stop work, you have some hours with light where you can walk. So, I think Florence in June is the best. 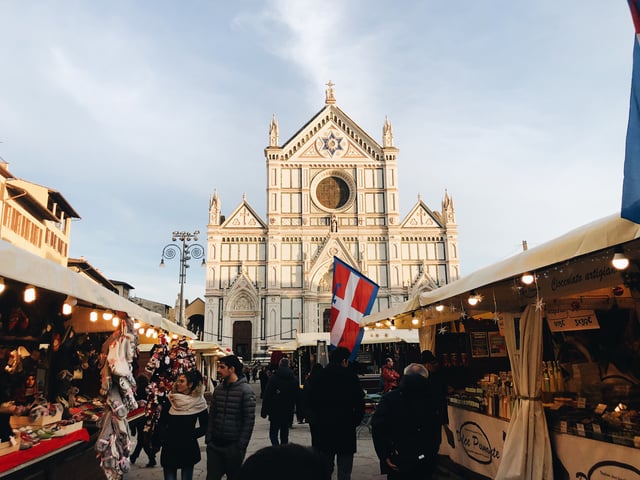 Payton: What do you think are the biggest cultural differences between Italy and America?
Bianca: I think that living in Florence, this is accentuated, but America is a new country. Everything’s new, everything is contemporary—it’s the center of the world right now. But in Europe you have culture of many, many people that lived here before, and I think you can see that in every little thing—the food, the streets, and the culture.
Sabrina: I think that probably the biggest thing is that in America, if you want to do something, you do it. It’s not exactly just doing things but it’s your mental approach to things. If you need to do a thing, then you go and do it. In Italy, in Florence especially, if you want to do a thing then you have to think about it very carefully, and then think about it again, and then check if it’s possible to do that thing, and then... I don’t know...there are a lot of boundaries, and it’s not so easy to do things. At the same time, both of these attitudes have good and bad things, and sometimes you should need to think more before doing things, and sometimes you should just do things.
Giacomo: I don’t know America very well. I’ve been in New York for a few days, and a few days in Washington, and I think that, for example, Dallas is completely different from New York, but from what I have seen, I can say something similar to my wife. So, I think that in America, everything is more simple, also in the relationships between people. But here, everything is more complicated, so I think that there is an easy life in the US, but here it is very [difficult].

Payton: What do you find the most interesting or funny about American culture?
Bianca: I think that everyone is like a child. Even the adults. It’s like a general thing, even when my dad went to Washington and he told us about a basketball [game] and how they shoot t-shirts and sandwiches [to the crowd]. And how a lot of adults go to Disneyland—that’s a thing. And these big markets, like shopping malls, full of amazement. Everything is youthful, in a good way. Everything is colorful and joyful, at least from what you see from the outside in the films. Of course, not everything is like that, but, you know.
Sabrina: I think that probably the funny thing that I like very much is that it feels that you are in a movie always.
Giacomo: I think that Bianca is right. When we were in the states, it’s fantastic. We have a lot of fun, everything is easy, and everything is great (especially the sandwiches). Everything is big, and what I like about the American people is that they live their life, it seems to me, with happiness. They try to have no problems, and, to me, this is a good thing.

Payton: What do you think about all the American students in Florence?
Bianca: I think it’s great. The thing about Florence is that everything’s old, we don’t have new things, we’re a sentimental city and we have old things, and that’s what our tourism is about. So, I think it’s cool to see young people from around the world coming here to see it. It’s also funny to be on the bus coming home, and there are American girls. It’s kind of weird! You’d imagine them in like Milan, or big cities, but then you find them here in Florence, and there are a lot of them, and I like that. It’s not like how in America you say, “Oh, I’m going to Los Angeles to see Los Angeles, the city.” When you come to Florence, you come to see the culture and the art, so I think it’s great that young people are interested in this kind of stuff.
Sabrina: The only thing that I am sorry about is that [the students and the locals are] too separated. I think there should be more resources. But it’s always two separate communities, and it’s such a pity.
Giacomo: I think it could be very simple to have [more of a] relationship between the American universities and Italian universities, and with the rest of the city and the town. Mixing up in anyway could be a good thing.

Payton: Why did you sign up for the Ganzo program?
Sabrina: I think that mixing up with other cultures is a great gift. I like to know other people and cultures, and doing so while eating together, for us, is the best way [to do this]. I think that we have learned so much since you came here, and not just the language, a lot of things, about you, about...
Giacomo (such a jokester): We have nothing more to learn as far as language!
Sabrina:Really, for me it’s a great opportunity and I’m so happy that [the kids] can have it. But I think I would do this even if they weren’t here, because it’s important for me to meet other people from other parts of the world.

Payton: What’s your favorite Florentine food?
Bianca: Oh, I would have to say if we’re talking Florentine [food], I like the tortelli [pasta], like the ones with the potato inside.
Sabrina: Probably, for me, it’s panzanella. It’s a kind of salad with bread, and you have it generally in the summertime. You take stale bread and soak it with water to soften it, and then you add tomatoes, cucumber, basil, onion, pepper, salt, and olive oil. It’s very simple, but it’s so good.
Giacomo: It’s very difficult because Florentine food is extremely simple and also extremely good because of the ingredients. But if I had to tell you one thing, it would be lampredotto. (A Florentine sandwich with trippa, the 4th stomach of a cow... sounds cringey, I know, but don’t knock it ‘till you try it!)

A different view of Santa Croce.

Payton: What are your favorite things to do in the city center?
Bianca: I like going to art shows with my friends. We went a couple times, and now it’s becoming a normal thing [that we do]. We always go when there’s a new show, and I really like that, because it’s fun to go with my friends and see their points of view about art. That’s one thing that I like.
Sabrina: Well, my favorite place is Piazza Santa Croce. I like to walk around there in general.
Giacomo: I like walking in the center of Florence. It’s very small, so you can walk all around and have a look at beautiful things, and if you have nothing to do it’s very good to walk and see it. 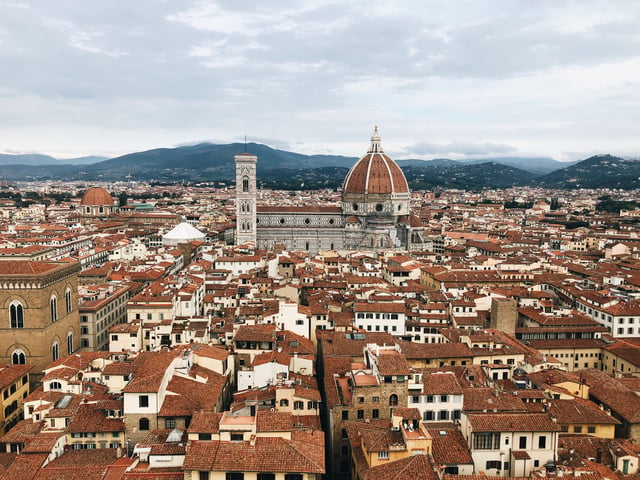 The Florence skyline from the Bell Tower.

And there you have it. Hearing what they find funny about American culture was my favorite part of the interview, because I will never be able to view the US from the outside looking in like that, and it’s interesting to hear how American life is perceived. After I finished my questions, Sabrina told me that it was my turn to describe my favorite things to do in Florence, to which I replied that I also love to just walk around and take it all in, visit museums and churches with some of the most important and incredible artwork in the world, and try all the tasty Tuscan foods that you can only find here. I also love to view the city from above, like from the bell tower, or a rooftop cafe, because the terracotta roofs are so beautiful to look at, and the Duomo always makes its appearance in the skyline, which I never get tired of looking at. 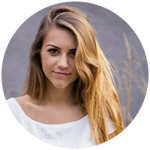 Payton Meyer is an official CAPA blogger for fall 2018, sharing her story in weekly posts on CAPA World. A Strategic Communication major at  University of Colorado Boulder, she is studying abroad in Florence this semester.