An Introvert's Guide to Barcelona: 10 Ways to Recharge

Yes, CAPA global cities are bursting with people from around the globe and are inevitably busy places. They're also home to some pretty amazing quieter spaces too that give the introverts among us a chance to recharge and perhaps discover another, more peaceful, side of a bustling metropolis. We recommend picking up a copy of a book called Quiet Barcelona by Siobhan Wall before you go. It’s packed full of ideas, but here are 10 of our personal favorite ways to recharge in the city. 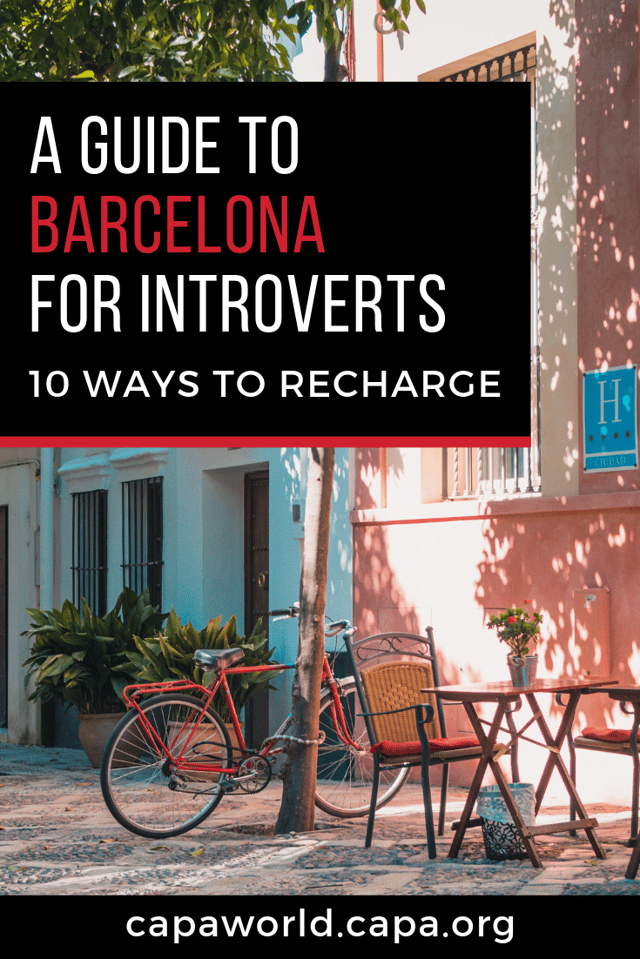 You’re spoiled for choice if you’re looking for green space to enjoy while you’re studying abroad in Barcelona. There are hidden little pockets like Turó Park with its beautiful pond, more well-known places like Parc de Cervantes at the end of the Diagonal where you can see 245 varieties of roses, and those that are much larger (but a bit more of an effort to visit) like Montjuïc. If you spend time on Montjuïc, don’t miss Jardins Mossen Costa with its 800 varieties of cacti and flower-filled Jardins de Mossen Cinto Verdaguer.

2. WANDER THE CITY ON FOOT 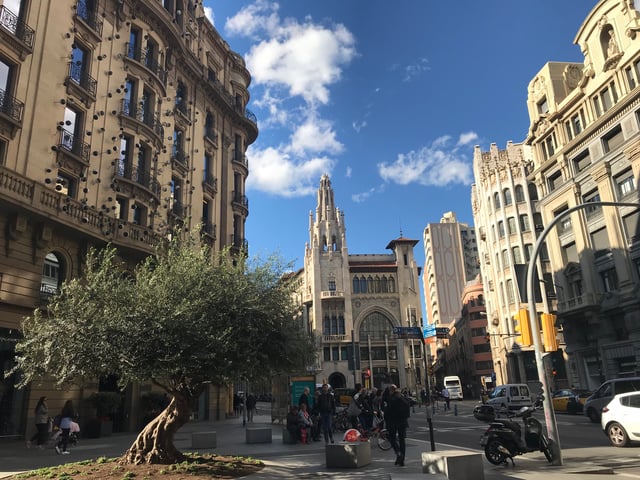 Walking around the city of Barcelona.

Walking tours are big in Barcelona, but if you prefer to explore on your own, you’ll have plenty of time to wander at your own pace, stopping as you wish. Download Google Maps or Citymapper or pick up an old-fashioned paper map to bring along. Go out with a plan or just let the city guide you. A few places we love are Passeig de Gràcia and its surrounding streets for an urban walk, the Gothic Quarter for a sense of the city’s history, the Carretera de Les Aigües for the great outdoors around the outskirts of the city, the boardwalk route that goes from Barceloneta to Llevant Beach near Poblenou for sea views, and Poblenou itself for trendy and creative vibes.

If you can’t resist the pages of an actual book over reading on a screen or just love the atmosphere of a cozy bookshop, spend some time browsing the shelves in some of the city’s best librerias. One of the best options for English language books is Come In. You’ll also find a few English books in La Central, a beautiful shop with a cute patio that’s also great for a coffee break. If you’re after some cheaper prices, there’s Hibernian Books which sells second-hand English titles in Gràcia. For the travel addicts among you (ahem), don’t miss the opportunity to fuel your wanderlust in Altair, where books (novels, not just guides) are organized by location. It also has a cafe. Don’t miss a visit to Laie or the CCCB cultural centre bookshop either.

It doesn’t get much more tranquil than a walk in a cemetery. You’ll find some great insight into Spanish culture and history while you’re there too. If you choose just one Barcelona cemetery to explore, make it Poblenou. This was one of the city’s first official resting places, originally established in 1775. Take note of the incredible sculptures, especially the harrowing “Kiss of Death.” Montjuïc Cemetery is another intriguing place, a final resting spot for some of Barcelona’s wealthiest people and prominent cultural figures, including Joan Miró. (Bonus tip: Take a look around the funeral hearse museum at the entrance.) One of the most used graveyards these days is Cementiri de les Corts, where many FC Barcelona players, managers, and fans have been laid to rest.

Whether you choose to drink an espresso amidst the art nouveau charms of La Granja, sip a latte at the cacti, succulent, and art-filled Espai Joliu, indulge in a delicious cacaolat with churros at the charming Granja Viader or switch it up with a tasty matcha at Hidden Cafe, you’re not short of options for a cafe stop in Barcelona. Some student favorites for reading or studying with a hot drink include the Alice in Wonderland-themed Pudding, the spacious Federal Cafe in the Gothic Quarter, the comfy Library Lounge, and the hidden gem with its giant chipped-away map of the world on its wall that is Trópico. Study up on how to order your brew of choice like a local before you go.

You can spend hours or days (or weeks, if you really wanted to!) cycling along the coast of the Mediterranean as far as you’re willing to pedal. Rent (or borrow, if you know a willing local) a bike and head over to the Mirador de Colom at the end of La Rambla. Cycle out along the side of Port Vell, then follow the Ronda Littoral when you come to Barceloneta. Continue down the edge of the beach past El Peix, Frank Gehry’s famous fish, then head out all the way to the Park del Fòrum in Poblenou. Retrace your path to end up back where you began or seek an alternative route home through the city streets to take in some different sights.

7. SOAK UP THE VISUAL ART CULTURE

Wondering what Barcelon’s visual arts scene has to inspire you besides the big names—Picasso, Dalí, and Miró—that you keep hearing about? A ton! Centre de Cultura Contemporània de Barcelona is one of the largest and best spaces to start your journey if you’re hoping to see what’s happening on the contemporary arts scene. Then try CaixaForum, a textile factory/castle turned exhibition space which hosts some incredible shows. Pop in to Museu Can Framis for more contemporary Catalan art, Disseny Hub for design and fashion, A34 for the unconventional, and ProjecteSD for film and photography. That should keep you busy for a while and there are many more beyond those. Barcelona also boasts a great street art scene to discover on your walks.

8. FIND THE MOST AMAZING VIEWS

With its mix of elevated points and low-lying coast, Barcelona is not short on awe-inspiring views. A favorite place to soak them in is the Bunkers del Carmel where an old air-raid battery is perched on the mountaintop. We also love the vintage Tibidabo Amusement Park (opened in 1868 and one of the oldest in the world) with its rainbow Ferris Wheel and breathtaking sights. Montjuïc Castle, that sits atop the leafy mountain, has a fantastic cityscape view from its ancient military fortress (overlooking Barcelona since 1640) where canons still point to the Mediterranean. MNAC, Port Vell and Del Turó boast impressive views too, and we’re confident you’ll stumble upon others as you become more familiar with the city.

If the idea of sharing the sand on Barceloneta with thousands of other sun-seekers leaves you wishing for winter, not to worry. This coastal city and its surrounding towns are generous with their sea; there are other much less crowded places to let the waves rush around bare ankles. A hour with a book on an air-conditioned train to Sant Pol de Mar, for example, will take you to nearly empty Platja del Morer with the rocky hills raising up behind you. Alternatively, try the hidden Platja de Sant Simó in Mataró where the smooth golden sands slope gently into a deep blue Med, washing away some intense history that you should read about before you go. Nearby Tarragona, Sitges, and especially Girona have some incredible secret beaches too. 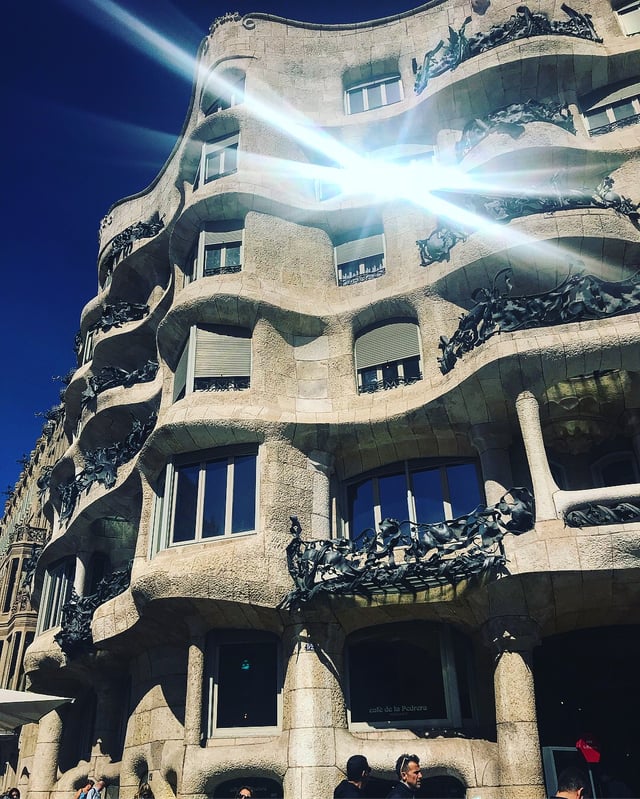 Barcelona has awe-inspiring architecture all around.

We don’t have to remind you that you’re in one of the world’s most architecturally spectacular cities. Just look up. You’ll find a mix of old and new in a variety of styles and from many different eras, often with incredible details that you’d miss if you didn’t purposely stop to look for them. Head out with your camera for an Antoni Gaudí treasure hunt or explore the work of others who left their mark in Barcelona, like Josep Puig i Cadafalch, Enric Miralles and Benedetta Tagliabue, Herzog & de Meuron, Lluís Domènech i Montaner and Emba Estudi Massip-Bosch arquitectes, to name a few.

Like any good city, you'll find a chance to experience many things for the first time and a way to recharge at the end of an exciting day. Save this list for when you make Barcelona your home for the semester!