Analyzing and Exploring the Global City

In this blog post, gain an inside look at CAPA’s unique course—“Analyzing and Exploring the Global City”—and find out what students can expect when taking the course in Barcelona, Dublin, Florence, London, and Sydney.

I stood in the middle of one of the exhibits in Sydney’s Hyde Park Barracks Museum reading through a series of lists etched on panes of glossy stone dotting the center of the room. Each line on the lists contained the name of a British convict and their crime—stealing a loaf of bread, stealing a bag of sugar, or cutting down a tree in an orchard—for example. These were the men and women who were transported to Australia by boat between 1787 and 1868 to serve their sentences and to help build up Britain’s newly claimed territory in New South Wales.

During my visit to the Hyde Park Barracks Museum—a UNESCO World Heritage-listed site that was originally built to house convicts—I learned about early colonial Australia in an immersive way. One part of the visit even involved a tour of a bunk room packed with rows of hammocks where the convicts slept. 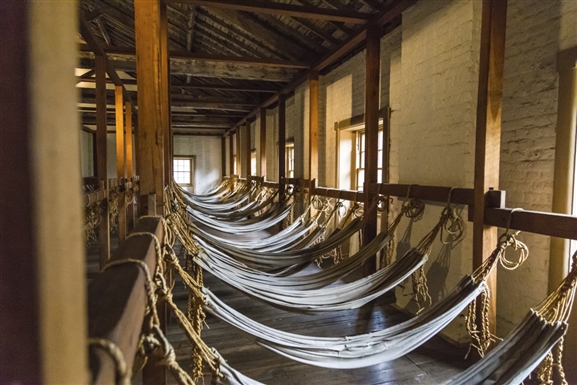 My visit to the museum was a field class session for Analyzing and Exploring the Global City: Sydney. During the visit, my professor, Dr. Julia Miller, shared her insights and expanded on what our class was learning through the exhibits. She answered all of our questions, including why all these prisoners had been banished to a place thousands of miles from home for what were mostly petty crimes. I won’t share too much though… you’ll have to take the course to learn more!

The Analyzing and Exploring the Global City: Sydney course includes a variety of class activities from interactive lectures and guest lectures to group discussions, student presentations, walking tours, and field classes. The field classes may vary by semester and can include a visit to the Customs House, the Museum of Sydney, and the Great Synagogue. Through the classroom activities and experiential learning aspects, students will learn about the impact of globalization on Sydney, a major global city, through the frameworks of sociology, anthropology, and global studies. Students will also explore Sydney's development, from early Indigenous connections to Sydney as tribal country, the establishment of a colonial outpost of the British Empire, through to the multicultural metropolis it is today; examine how colonization, migration, economic modernization, and globalization have affected the city and its inhabitants; develop an understanding of changing dynamics and identities of communities within Sydney; and analyze forces that have shaped Sydney’s relationship with Asia and the rest of the world. Ultimately, the course intends to help students contextualize their travels and interactions in the city and helps them develop informed interpretations of the city during their time there.

The same course is offered in CAPA’s other Global City locations: Barcelona, Dublin, Florence, and London in the spring, summer, and fall. Find out more about what students will experience and learn in each location:

Analyzing and Exploring the Global City: Barcelona examines the emergence of this elegant, creative city as Spain’s gateway to the Mediterranean, and analyzes its history and evolution since its founding by the Romans. Students will explore the role of population dynamics, industrial change, and globalization in shaping the city and the lives of its inhabitants, examining the ways in which the interplay of urbanism, politics, and society has addressed challenges of social, political, and technological change in the past and today. The course also traces the changing nature of Barcelona’s relationship with the rest of Spain, Europe, and the wider world. Students will visit sites such as Park Güell, Plaça d’Espanya, Avinguda Maria Cristina, and the Raval, where they’ll be able to experience the city’s varied urban geographies first hand. They will consider what these sites reveal about the city’s complex history, but also how they are used today to represent the city’s past, present, and future to contemporary Barcelonans and tourists. Through the course, students will enhance their understanding of recent Spanish and Catalonian history, politics, and society through engaging lectures and field studies that take them around the city. 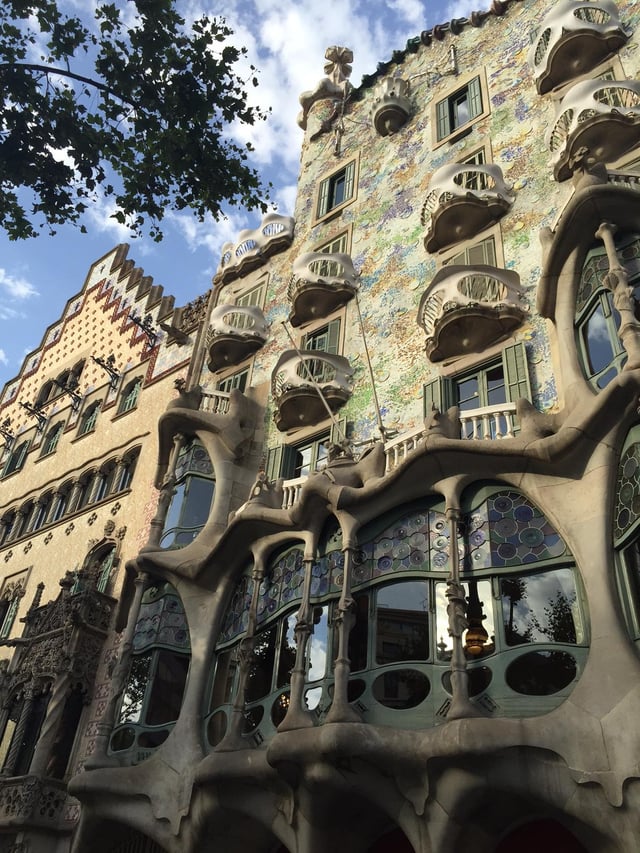 This course focuses on the physical, socio-economic, political and cultural development of Dublin. Students will examine the city’s architecture, museums, art, oral histories, written texts, and more to learn about the phases of the city’s morphology from a 10th century Viking settlement to a postcolonial city characterized by urban sprawl and multiculturalism. Students will also explore the rapid physical and socioeconomic and cultural changes that took place from the 1970s to 1990s, as well as the creation of new multiethnic spaces and the city’s rebranding as a literary-cultural space. Finally, students will investigate the processes that occur in most global cities, which contribute to the creation of invisible spaces and subcultures that are found on the physical and cultural margins. 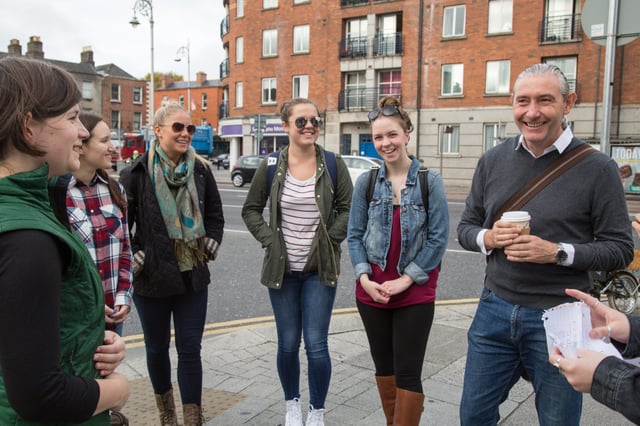 Professor Darren Kelly leads his class on a walking tour around Dublin.

Students will experience Dublin’s varied urban geographies firsthand through field studies that may include a visit to the National Museum of Ireland; a trip to Ballymun (one of Europe’s largest contemporary regeneration projects); and various walking tours, including to Dublin’s Docklands, an area nicknamed ‘Europe’s Silicon Valley’. Through field studies and in-class sessions, the aim is for students to develop an understanding of, and appreciation for, the evolution of Global Cities, their governance, and the complexity and richness of their various neighborhoods and subcultures. The course is also intended to allow students to reflect on their home environments and to contextualize their own extracurricular travels and encounters in the city during their stay and to develop their own interpretations of Dublin as a place to live, work, and play.

Through a combination of in-class meetings and field studies, students will examine Florence’s history as well as its current state: an ethnically varied population with complex sociocultural dynamics at play in shaping the identity of this fascinating city. Although migration has intensified over the last few decades, multiculturalism itself is not a recent phenomenon: over the centuries, groups of different ethnicity, nationality and religion have contributed to Florence’s cultural wealth. Even the shortest of walks can unveil this wealth for the eyes of the attentive observer and it is precisely this understanding that this course provides. Students will analyze the complex dynamics that shape the identity of Florence by applying a critical perspective on the notion of globalization and by analyzing the sociocultural forces at play both historically and presently. Students will also learn to notice the cultural variability that is present in the city and gain insight into the various ethnic groups that inhabit Florence today through both scholarly sources and direct observation. Florence will become their research field as they study the urban landscape by walking in the city and observing the built environment and human behavior. 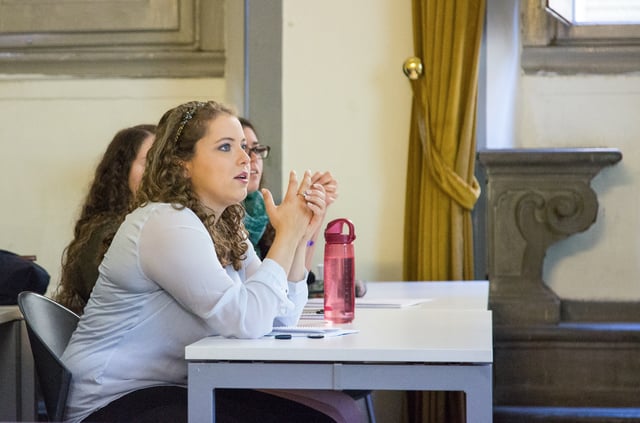 Students will examine how London has been transformed by the forces of industrialization, imperialism, and globalization from the 19th through the 21st century and consider the ways in which London and its inhabitants have been shaped by their relationships with the rest of the world. Students will gain insight into London’s changing identity as a world city; the ways in which past and present, local and global intertwine in the capital; and comparative study of urban change worldwide. The course is organized around themes that include London as an imperial space; representations of the city in media, film, and popular culture; multicultural London; London as a commercial center of global capitalism; the impact of the Olympics and other urban ‘mega- events’; and future scenarios of urban change.

The course will mix classroom work with experiential learning, and will be centered on field studies to sites such as Brixton, Spitalfields, Southbank, and the Olympic sites in East London to give students the opportunity to experience the city’s varied urban geographies firsthand and interact with these sites in an informed and analytical way. They will consider what these sites reveal about the city’s complex histories, but also how they are used today to represent the city’s past, present and future to contemporary Londoners and tourists. 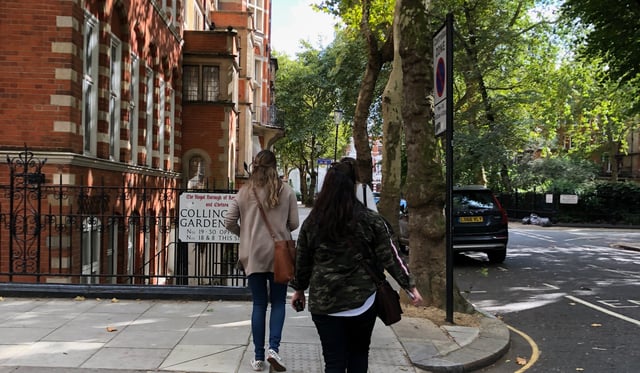 In the Analyzing and Exploring the Global City courses in all locations, students will work toward achieving CAPA’s Student Learning and Development Outcomes relating to Globalization, Urban Environments, Social Dynamics, Diversity, and Personal & Professional Development. By the end of the course, students should be able to recognize, describe, and interpret examples of the impact of globalization in the urban environment and reflect on differences and similarities between their home country and host country. And of course, they will have explored corners of their dynamic and multicultural host city that they may not have otherwise ventured to, all while increasing their understanding of and appreciation for their Global City.

Learn more about the Analyzing and Exploring the Global City course and explore all of CAPA’s course offerings here: