Must Do in Buenos Aires: Visit the Colorful Neighborhood of La Boca

In this post, Elizabeth talks about arriving at her homestay in Buenos Aires and her first explorations of the beautiful Recoleta neighborhood that she will call home for the semester.

My first week here has introduced me to new foods, taught me new words, and taken me to some pretty extraordinary places.  I’ve eaten delicious milanesas and empanadas, seen more of the varied and stunning architecture of the city, and looked at beautiful works of art.  Yesterday I had the opportunity to walk around one of Buenos Aires’ most colorful neighborhoods-- La Boca.  With art in just about every corner, the streets of La Boca are imprinted with stories of immigrants, labor, poltical protest, tango, and much more. Although it’s impossible to sum up the area’s complex cultural, political, and economic heritage briefly, much of La Boca’s recent history--and its transformation from a center of industry to space for artists-- centers around one man: artist Benito Quinquela Martin. 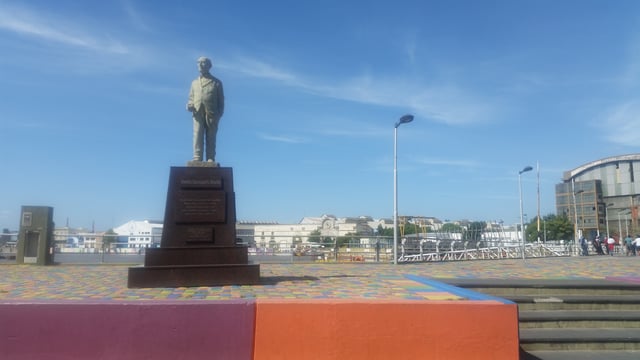 A statue of Benito Quinquela Martin next to the port.

Benito Quinquela Martin was born in La Boca, abandoned as an infant at an orphanage March 20, 1890, and adopted at the age of 7.  At an early age, he began working in the coal yards by day and teaching himself to paint by night. After achieving fame and status for his paintings, especially in France, he returned to La Boca and donated many works of art, a school, and a center for orphaned children to be nursed and cared for. He set up his own small apartment and art studio on the top floor of the school, where he held meetings with other thinkers and artists. He also bought a strip of land in 1950, Caminito, where the walls were painted with bright colors and several art pieces were installed, in an effort to bring in a little tourism from other neighborhoods around Buenos Aires after the closing of the port left many people out of work. To call that effort successful would be an understatement; today La Boca is full of street art and local vendors, and is visited by tourists from all over the world. 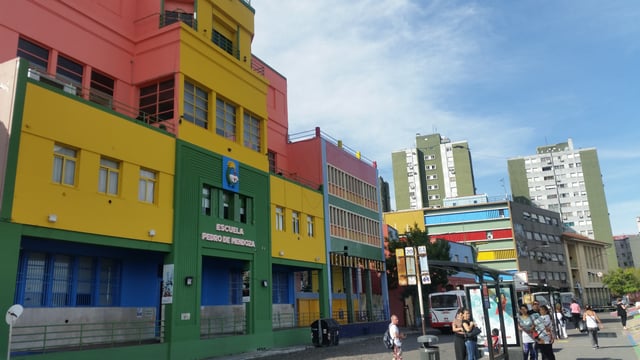 Here's Caminito. You can see some art pieces and vendors along the sides of the street. The buildings are some of the original corrugated iron and wood.

Quinquela Martin’s paintings use thick layers of rich, vibrant colors (he painted with a metal palette rather than a paintbrush), and reflect life and labor among the ships in the working-class neighborhood of La Boca.  They are enormous and profoundly stunning, and can be viewed at the former school, now a museum, where he lived his later years. 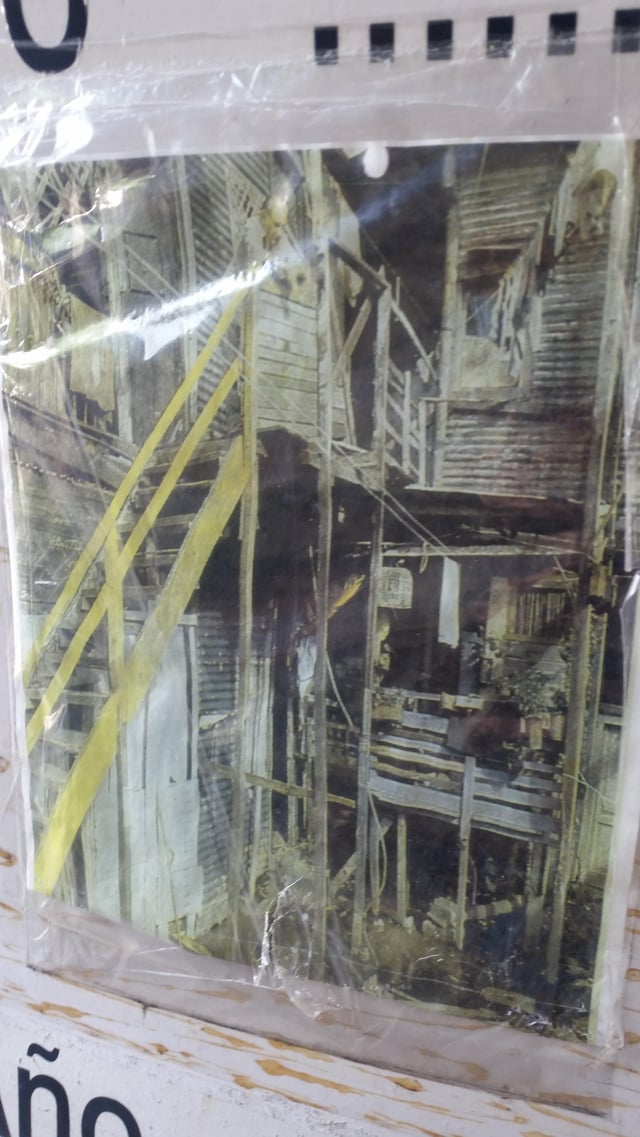 La Boca, (“the mouth” in English, because it sits at the mouth of the sea), is a port town home to a variety of languages and traditions. It was settled primarily by immigrants from Italy, Spain, Germany, and Eastern-European and Middle-Eastern countries in the late 1800’s-early 1900’s.  As part of President Julio Argentino Roca’s effort to increase immigration to Argentina, many of these immigrants came with the promise of work and free land.  However, most were forced to settle in close quarters, working in the docks or coal yards for little wages.  They built shared housing blocks out of materials from the shipyard-- corrugated iron sheets and wood-- and often took turns sleeping between shifts, sharing a single bed between three people.  Many of these buildings still stand today, now painted with bright colors and brimming with vendors and tourists. 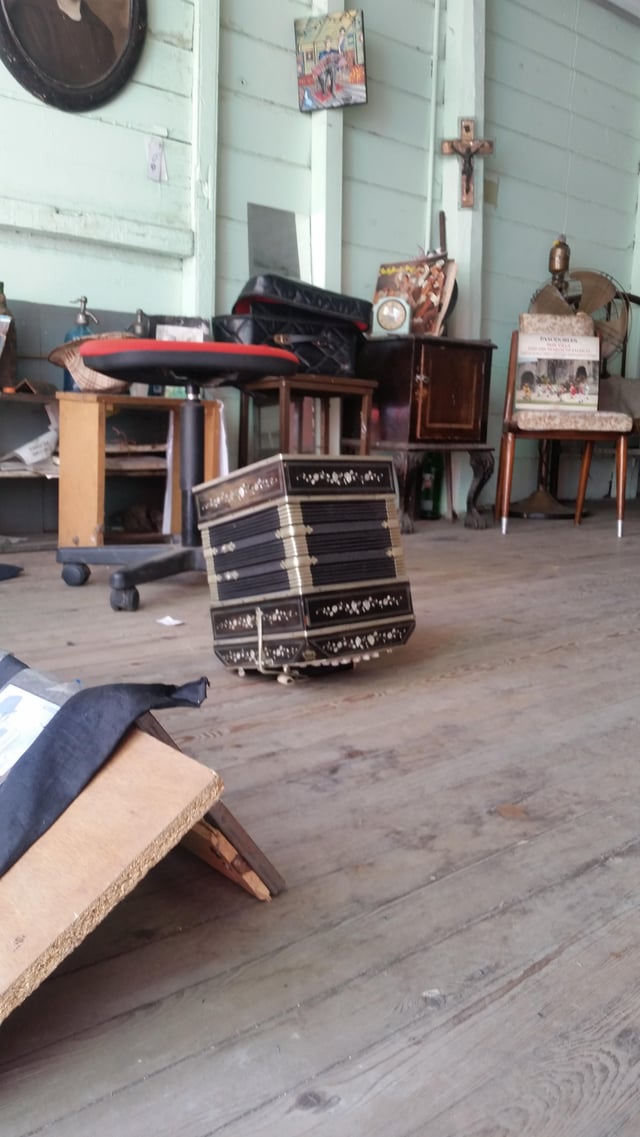 Here's a bandoneon! It's missing a piece from one of the ends because it was being fixed while I took the picture. It's bisonoric (meaning each button has a different note for in and out) and it's got 71 buttons.

Out of these cramped and destitute living conditions came one of Argentina’s most reputable traditions-- tango. Originally it was a dance between two men, as most of La Boca’s residents were single, male immigrants.  It’s believed that the dance started as a contest between two men to trip eachother while dancing.  Argentina’s national instrument, synonomous with tango, is the bandoneon.  It also comes from immigrant communities, brought over from Germany and used for tango music.  It wasn’t until tango was popularized in France by French-Argentine Carlos Gardel that it became popular outside of working-class immigrant communities. Gardel is also commemorated in La Boca-- you can find his portrait in street art around the neighborhood. 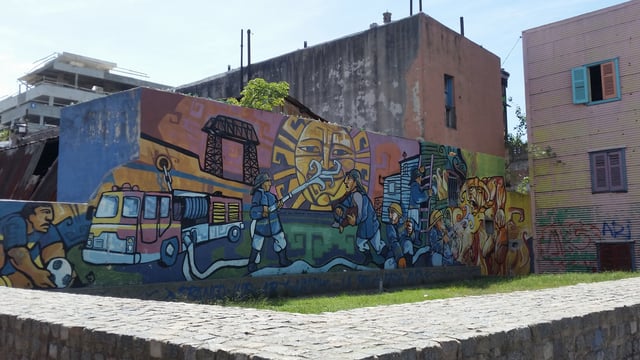 Here's a mural by the street art group Rubenbispo. It commemorates La Boca's Volunteer Fire Department, founded because fires were frequent in the mostly wooden houses of the neighborhood, and the official fire departments were neglectful of the area.

Walking around the streets of La Boca, seeing the way industry, art, labor, and immigrant struggles are all commemorated here, I felt a kind of affinity with this place.  My great-grandparents were Italian immigrants, settled in an inland port town where they worked dangerous hours in steel mills.  To see the celebration of life and color in La Boca, and understand a little of the identity and community forged here-- in football, food, art, music, dance, and so much more-- was fascinating and really moving.

That’s all for this week-- thanks for reading!

Elizabeth Withers was an official CAPA blogger for spring 2017, sharing her story in weekly posts on CAPA World. A double major in English literature and history & philosophy of science at the University of Pittsburgh, she is studied abroad in Buenos Aires with CAPA. 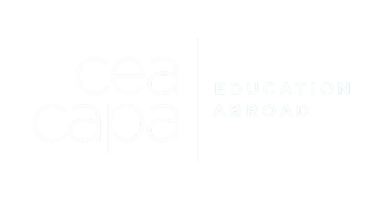