In this week's post, Elizabeth talks about arriving at her homestay in Buenos Aires and her first explorations of the beautiful Recoleta neighborhood that she will call home for the semester.

After 28 hours of sitting in planes and airport gates, I have finally arrived. I’ve settled into a stunningly-decorated room in an apartment in Recoleta, a neighborhood known around the world for its beautiful and unique cemetery. The apartment really is luxurious -- I’ve got a balcony with a pretty view and dozens of potted plants right outside my bedroom, and I think my rug may have once been a real zebra! My host has worked as an interior decorator for many years, and it shows. 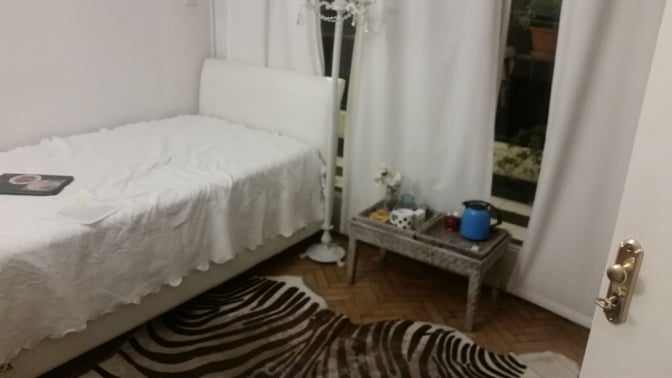 The apartment building is just a block away from Plaza Libertad, and I’ve spent much of today walking around in various plazas, finding shade and enjoying the scenery. The plazas are filled with beautiful plants, fountains, statues, and art. It’s about 90 degrees here (Fahrenheit), but there’s plenty of shade cast by the enormous Gomero trees. Gomeros are Ficus Elastica -- rubber trees, which are a species of the fig genus (for any tree aficionados), and although they are not native to Argentina, Buenos Aires is famous for some impressively old and large specimens. I saw many today in the Plaza Libertad and around the Recoleta Cemetery. The trunks are about four feet wide and the roots spread out to cover at least three times that. The branches are thick and heavy, and very, very long. They just keep growing until they hit the ground -- or, in some places (like outside the Recoleta Cemetery) they have a little bit of support to stay in the air. 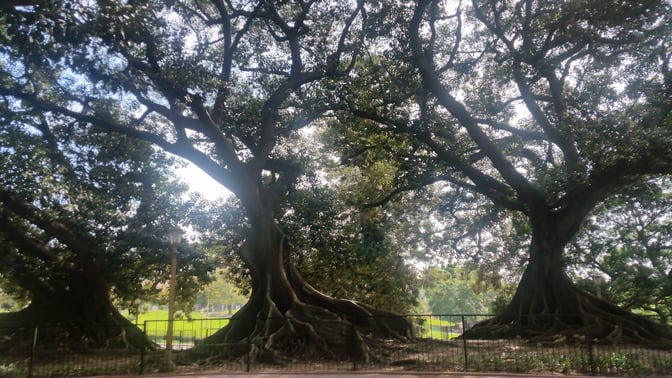 Which brings me, finally, to the cemetery. Today I could not find a tour, so I’ll have to go back to see some of the graves of its more notable residents and learn more about its history. It was breathtaking just to walk around through the ornate and seemingly-endless walls and walls of graves. 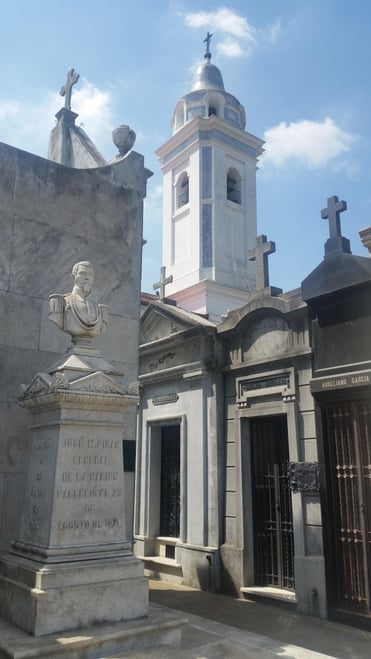 The Recoleta Cemetery was built by an order of monks in the early 1700’s. The 14 acre space is walled in, and filled with thousands of graves like little buildings. Many of them have glass panes and inside are coffins lying on tables of silk, portraits, religious iconography, photographs, and much more. There’s a wide range of styles and materials among the graves. Some are exquisitely carved and gothic-looking with wrought iron windows, some are art deco, with clean cut lines in marble or granite, others are red brick, or pyramid-shaped, or feature ornate statues. Many of the graves of notable figures are topped with busts. 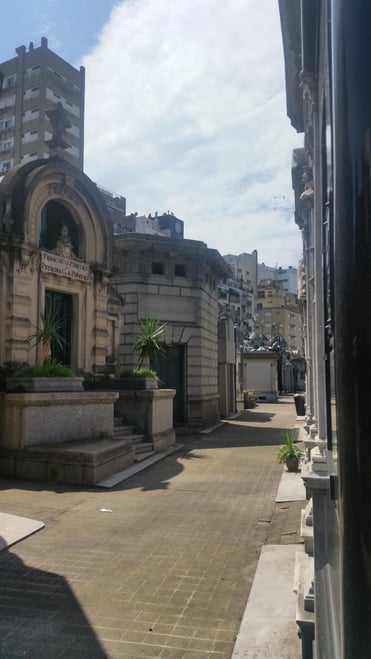 As I mentioned, I wasn’t great at finding the graves of famous people on my own (although I know that Eva Peron’s is there somewhere). I did come across many beautiful graves that stood out to me, and a few pictured here are of Jose Figueroa Alcorta, President of the Argentine Nation from 1906-1910, Jose Maria Piran, a general who fought in the Brazilian War and in civil wars in Argentina, and Francisco Pineyro, a member of congress involved in santioning the Argentine Constitution of 1826.

That’s all for my first day, thanks for reading!