Arriving in Buenos Aires for a Semester Abroad

Having arrived in Buenos Aires, Tommy shares his first impressions and meets his host family in person.

My airplane touched down at Ezieza, in Buenos Aires, and cruised to its gate. Once we were allowed to stand, I was lost in a barrage of Spanish brought on by my fellow travelers. Tired from a long overnight flight, I began to worry my Spanish wouldn’t be good enough to converse with natives.

I followed the crowd through a corridor with glass walls. The left side exposed the runways and the jets. To my right, travelers waited for their flights. The signs, of course, were in Spanish, but I was glad to have English subtitles to ensure I was headed in the right direction.

I waited in a long line in a large, open, gray room with high ceilings at Migrations (which, fortunately, had WiFi). Nobody seemed excited to be there, especially in my line, the one for foreigners. Although I wished that line moved as fast as the Argentine line, I did enjoy overhearing French, Spanish, English and another language I couldn’t identify. I gained some confidence in Spanish by speaking pretty well with the officer there while she took my photo, stamped my passport and recorded my fingerprint. My taxi ride, though, really made me feel good. 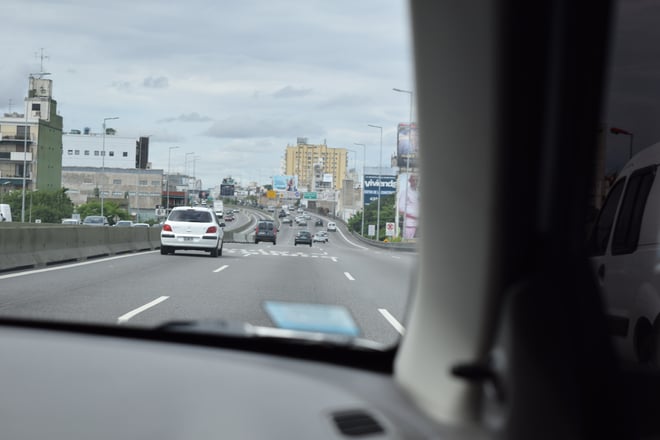 Photo: My taxi driver was very nice and super helpful. Here’s a shot from my ride.

I had an almost seamless conversation with the driver, a retired librarian who had lived all over Latin America. He told me a little bit of information about everywhere we passed, pointing out churches and explaining street and barrio names until we arrived at my host family’s apartment. I picked up some new vocabulary from him and learned about Argentine politics, Bolivian immigrants and Brazilian books. Like every other Argentine I’ve met so far, he was incredibly sociable and kind, engaging and passionate. 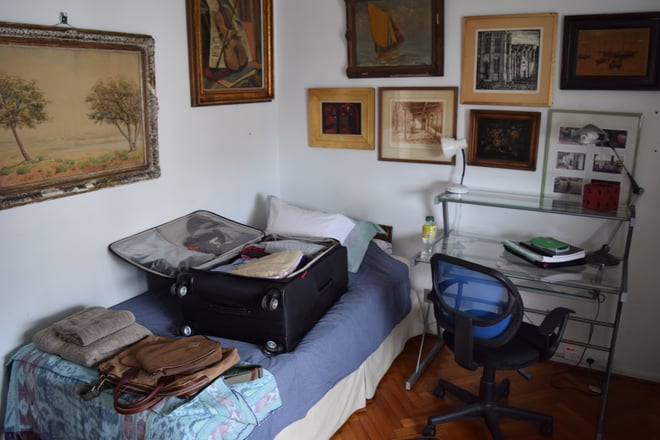 Photo: I have my own bedroom and bathroom in Adrianna’s apartment.

I met my host family for the first time in person, and they gave me a tour of their apartment, which is in the Recoleta barrio. They’ve hosted many foreign students and are currently housing a German citizen researching his doctorate thesis. My host mom Adrianna and I had the chance to get to know each other a little better. During the week, her husband works in the country, on their farm about two hours outside of the city. Adrianna works in the city as a decorator. Her youngest son lives with them but leaves for England in a few days for an internship. She has another son and a daughter who have moved out but visit often. (In a future post, I will go into more depth about Adrianna the family. They are great!) 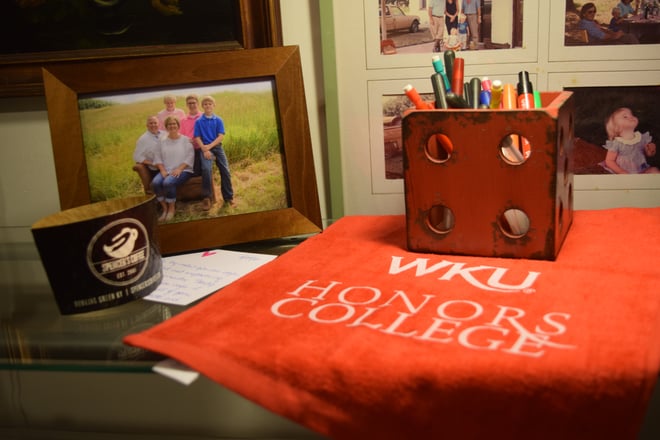 Photo: I brought some mementos from home: a photo of my family, a note from my mom, a red towel from my home university and a sleeve from my favorite coffee shop.

Although my Spanish is far from perfect, I’m very glad to have studied it for almost seven years now. I communicate well with my host family, vendors and other Argentines and have very few misunderstandings. Adrianna and I have pretty fluid conversations about lots of topics.

After talking with my host family and checking out the apartment, I had some much needed time to myself. My nine-hour flight had exhausted me. I unpacked and cleaned up. Finally, I had a chance to relax and smile. My adventure was beginning to unfold. 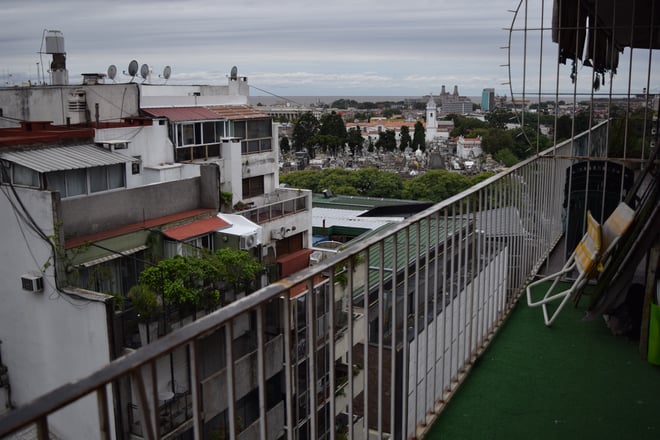 Photo: My view from the balcony! Buenos Aires is a beautiful city.