Arriving with a Sense of Curiosity

In this week's post, Kelly talks about cultivating a sense of curiosity and what she did upon arrival.

The plane to London's Heathrow Airport was just shy of eight hours from Chicago. Thirty minutes before landing, I fought every urge to take a photo in my millennial and photographer body. I wanted to sit there and enjoy the view. I want to make it my goal to not experience London entirely through a lens or screen. I saw a cluster of buildings on an island and a beam of light I assumed to be the London Bridge. Aside from the fact that I actually knew I was in London, I knew what that cluster of buildings was thanks to my new obsession with Netflix's original series The Crown. It's where I've brushed up on my British history before my arrival. As we span in what seemed like endless 5 mph donuts, I thought about what I wanted to get out of this trip. I came to the conclusion that I want to get better at asking questions. I am a journalist, after all. It's our job to be curious. That's the easy part for me. But it's actually asking them that's the tough part. I have all of these questions, but only ever really ask a few. and need to get better at actually asking them. This will be crucial in my internship with fashion label MLML London this semester, so I can learn as much as possible.

In the airport, I noticed a sign that read "Lounge, showers & spa." If that's not hospitality, I don't know what is. I rounded up a driver using the tourist services because taking the Tube or finding a taxi probably would've been a struggle and waste of time for me. When we hit the highway, it didn't seem like we were anywhere specific. The almost bland area could've been mistaken for Wisconsin–I even saw a sign for Burger King. The roads didn't feel different…until I looked across the highway and realized all of our one-way lanes were on the left side. 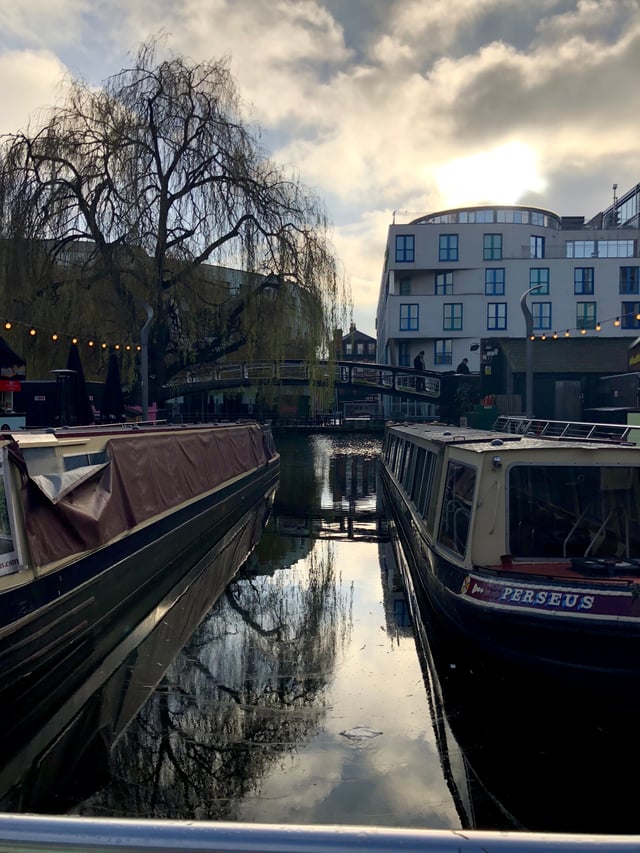 The river by Camden Market.

It was definitely odd looking over at other cars and seeing someone sitting in what would be the American passenger's seat and no one sitting in what would be the American driver's seat. On the drive, I also noticed cars parallel parked on some streets cars park on both sides of the road facing whatever direction they please. I also am 99 percent sure I saw some palm trees in someone's yard. Headed to Camden Market for a bite.

When I arrived at my flat in Camden Town, both of my roommates where already there. The first thing we did was go on a quick walking tour of the neighborhood given by one of our CAPA representatives. It was optional, and I found it useful. It also helped us connect with other students in the building. Immediately after that, we headed to Camden Market to grab a bite to eat. We only stayed to eat, but I'm excited to go back to shop and explore more. What surprised me the most was how nice our apartments are in reality. I expected them to be less modern. Our room, which all three of us share, on the other hand, is pretty much what I expected–it's a tight squeeze. We'll all be super close by the end of this. I look forward to exploring more of the neighborhood and more of London.