In this week's post, Tommy shares his experience of attending church in Buenos Aires.

I’ve loved going to church in Buenos Aires. Being Catholic here has been really cool, as Pope Francis hails from the city.

Catholic mass is the same throughout the world, so attending it here is exactly the same as home. Knowing the order of the service has been comforting and relaxing, especially during the times I’ve been homesick. Plus, knowing my friends and my family back in the US did the exact same thing that weekend gives me some small bit of comfort, and it’s also nice to always have something to look forward to. Planning on going to mass also gives my Sundays somewhat of a schedule, so I can make the most of the weekend. 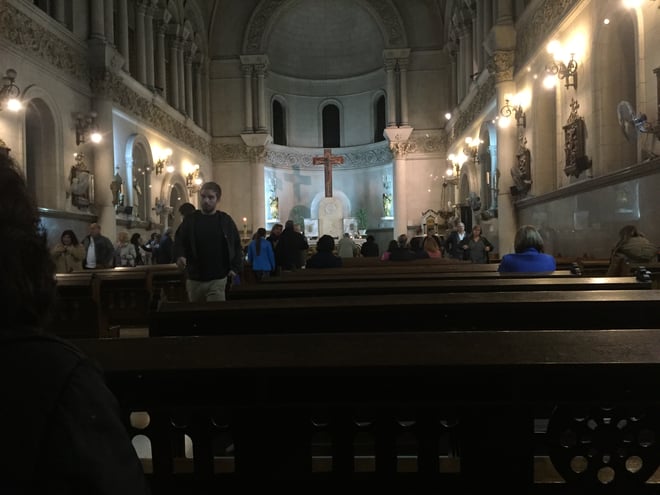 Photo: Here's a shot from the inside of the church I've been attending

At first, I tried a different church every weekend with the goal of experiencing as many as possible. To me, it seems like there are so many churches in Buenos Aires, and I feel like I can’t walk more than half a mile without seeing one. It was really interesting, too, to see that all of the churches are next to banks, grocery stories, apartments and other buildings because the city is so full. Back at home, most Catholic churches I’ve been to are deep in neighborhoods. 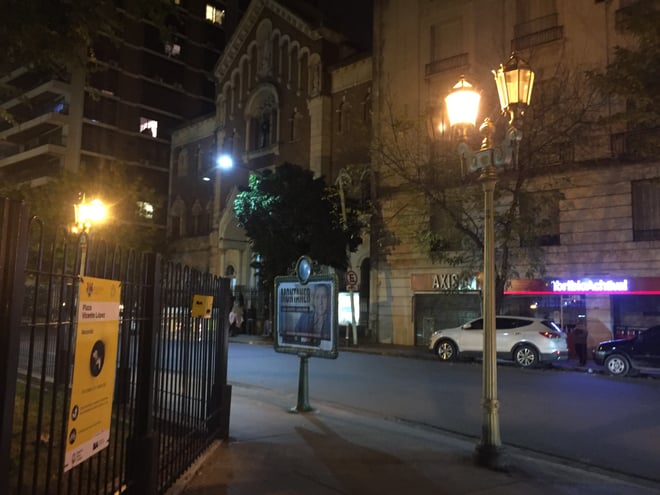 Photo: Here's the outside. Of course, it's at night, because I love to sleep in and go to late mass! Also, I'm still getting used to the urban setting for a church.

A few weekends ago, I found a really good church just a few blocks from my apartment. The first time I went, the priest gave a really good sermon, and I was able to understand him way more of it than the other priests I had listened to. I decided to start going there every Sunday. It’s almost always full, with standing-room only in the back, partly because there’s not a lot of seating. I’ve seen 8-year-old children in pajamas at most 9:00pm services, which I think is funny, but it’s just another example of how much later people stay up here. Church at 9:00pm would have been way past my bedtime when I was eight.

The only frustrating part of mass so far is that I can’t always follow along exactly, as there’s a lot of Spanish vocabulary I’m learning that relates to religion. Plus, the mass is very response-based, so, although I know the responses in English, I’m still working on learning them in Spanish. 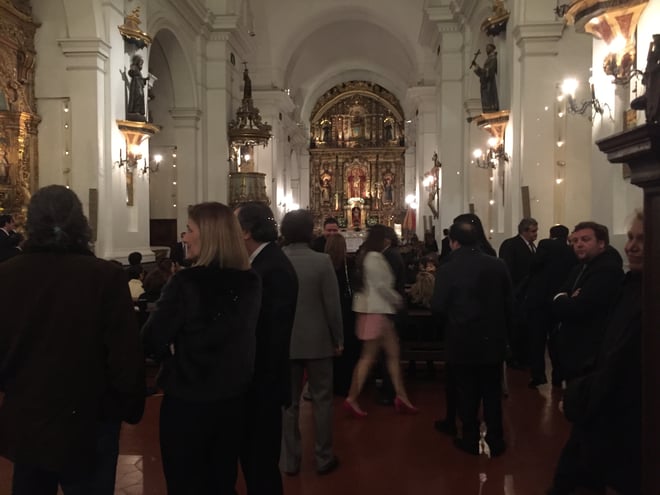 Photo: Here's the church Raven has been going to. (Also the church where my host sister got married last weekend!)

I asked my friend and classmate Raven about going to church in Buenos Aires. She told me it’s been very different from her nondenominational Christian church at home. Raven had never been to a Catholic church before coming here, so she didn’t really know what to expect. At first, she thought it was funny to see lots of Argentines wearing athletic clothes to mass, instead of their “Sunday best” (suit, tie, etc.).

No two study abroad experiences are exactly the same, so no one’s religious experience in our CAPA group has been the same.