Beyond Queen Mary University - Get to Know Mile End

The area around London’s Queen Mary University is called Mile End, which is part of the borough of Tower Hamlets. It’s a well-connected, lively, and diverse area of East London, home to markets, art galleries, and green spaces.

Read on to find out about some of our favorite local highlights, some useful amenities, a brief snippet of history, a look at the area’s general demographics, and some notes on transport links. 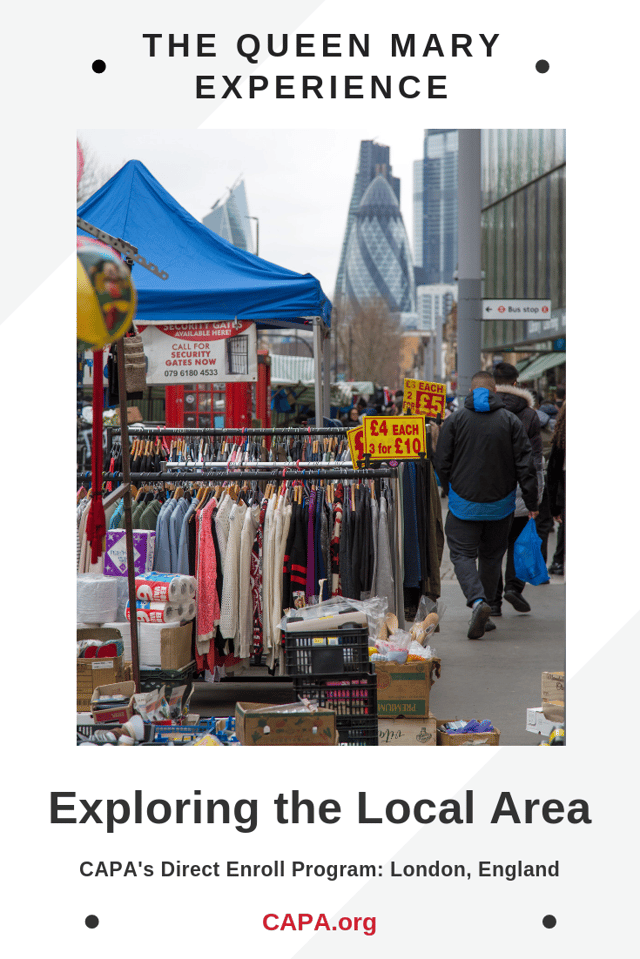 A BRIEF HISTORY OF THE AREA

The name Mile End comes from the fact that it is one mile from Aldgate in the City of London. Mile End Road was a medieval route from London to the East. From the 16th to 18th century, new migrants to the city lived here in working and lower-class housing. The site of Queen Mary University, (the history of which we wrote about in more detail in a previous post), played a role in bringing the local community together when it was originally opened as the Palace of Delight in the 1800s. Among other things, it brought to Mile End entertainment and education. In 1902, the Mile End tube station was opened. In the 1970s, the Stepney Green Conservation Area was designated, and a walk around the neighborhood will show its fascinating architectural history. 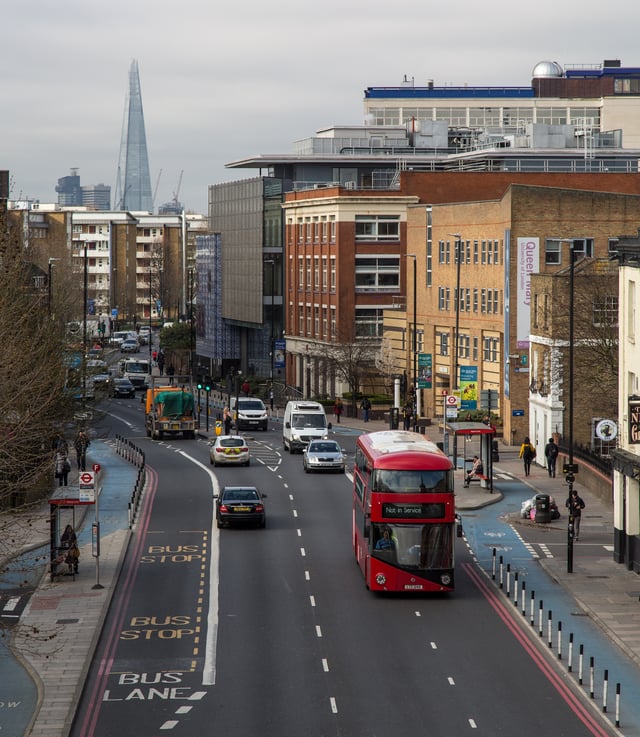 Running alongside the Queen Mary campus, just across the canal, is Mile End Park. It follows the Regent's Canal from Victoria Park to Limehouse Basin. The park is full of meadows, woodlands, and wildlife, and is a peaceful place to cycle, walk, picnic, or just relax.

An authentic, daily London market that mostly caters to the large local British Bangladeshi community, Whitechapel is vibrant and bustling, full of great bargains, cheap ingredients for soups or curries, and useful knickknacks.

One of London’s favorite contemporary art galleries is just a short walk from campus. They hold exhibitions from up-and-coming artists as well as retrospective exhibitions, film festivals, and music installations. They even recently hosted the London Art Book Fair. 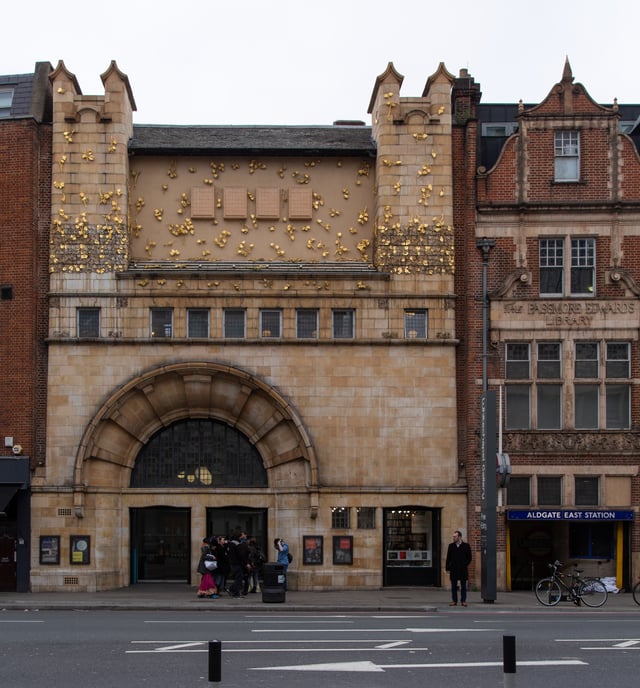 Within a 10-15 minute walk from campus, you’ll find some great places for a meal. There’s the Greedy Cow, a previous winner of a Love London Award and a student favorite, which serves excellent burgers, including one of kangaroo. The “Greedy Breakfast” is a popular brunch option on weekends. Also nearby campus, you will have a Nandos (peri-peri chicken and chips!), Dixie Chicken (another student favorite), The Rusty Bike (delicious Thai food), Pie Factory (traditional and specialty handmade halal pies baked on site), Verdi’s or The Pizza Room for pizza, The Orange Room for Lebanese, and Zealand Road Coffee for a caffeine boost and avo on toast. And don’t miss the chance to treat yourself to a traditional East End pie and mash shop experience; G. Kelly which has been around since 1939 and uses an 80-year-old recipe for their pies. If you’re brave enough, you can even taste their jellied eels.

Head a bit further afield, about a half-hour walk or two quick tube stops, and you’ll be in Shoreditch, one of London’s trendiest areas. A few excellent places to eat around there are Dishoom - one of London’s favorite Indian restaurants with retro fittings and the feel of an old Irani cafe in Bombay, the many food markets that branch off of and along the famous Brick Lane, SMOKESTAK for industrial-chic barbecue, Pizza East, Andina for ceviche, buzzy chophouse Brat for Basque food, and many more incredible restaurants than we can possibly name here. Also worth a visit, the Urban Food Fest is a pop-up street market held every Saturday in Shoreditch. 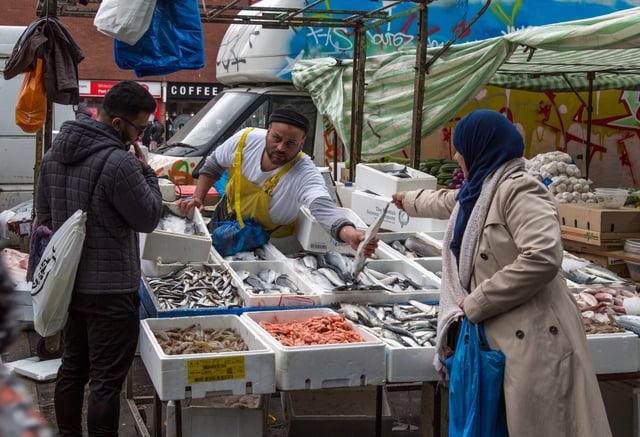 You’ll find plenty to do nearby with a cinema right next to campus, lots of green space along one side and beyond where you can rent bikes, the Mile End Climbing Wall, a shop where you can find some great bargains called East End Vintage Clothes, and a visit to the historical Ragged School Museum. Walk along the canal, and you’ll come to Victoria Park followed by Broadway Market.

Venture over to Shoreditch, Bethnal Green, and Spitalfields areas and you’ll find restaurants, cafes, art galleries, live music, theaters, markets, street art covered walls, vintage shops, design shops, clothing shops, the UK’s first cat cafe, the unforgettable Columbia Road Flower Market on Sundays, and more. You can also explore the fascinating Dennis Severs’ House where rooms have been recreated across historic time periods, and see some stunning Georgian architecture. In the other direction from campus, you can take the tube one stop to Stratford for the Queen Elizabeth Olympic Park. Or head south to Canary Wharf and Greenwich just a short journey away for riverside lunches and more exciting markets. 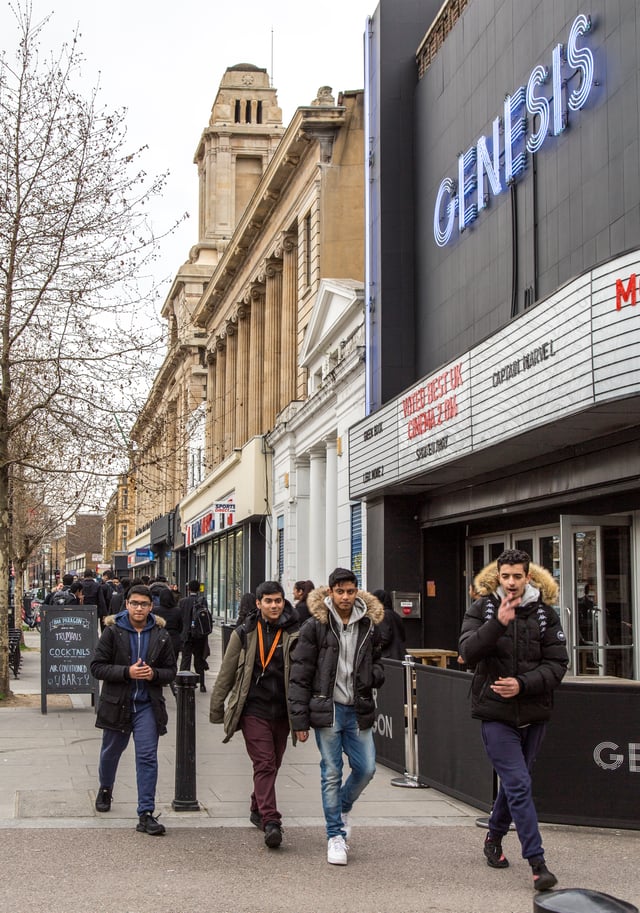 When you arrive at Queen Mary, you’ll likely want to pick up a few things for your room or the shared kitchen in your residence hall.

Local grocery stores include Asda, Sainsbury’s, Tesco, and Lidl. You can often find great deals on fruit and vegetables in Whitechapel Market down the road. Take the tube one stop to Stratford and you’ll find Westfield Shopping Center, a huge mall that will have everything you need.

The whole of central London is also at your fingertips, and there’s rarely anything you could possibly need or want that you won’t find there.

The latest census taken in Mile End was in 2011, so numbers may be slightly different now, but the council found the following breakdown from its local residents: 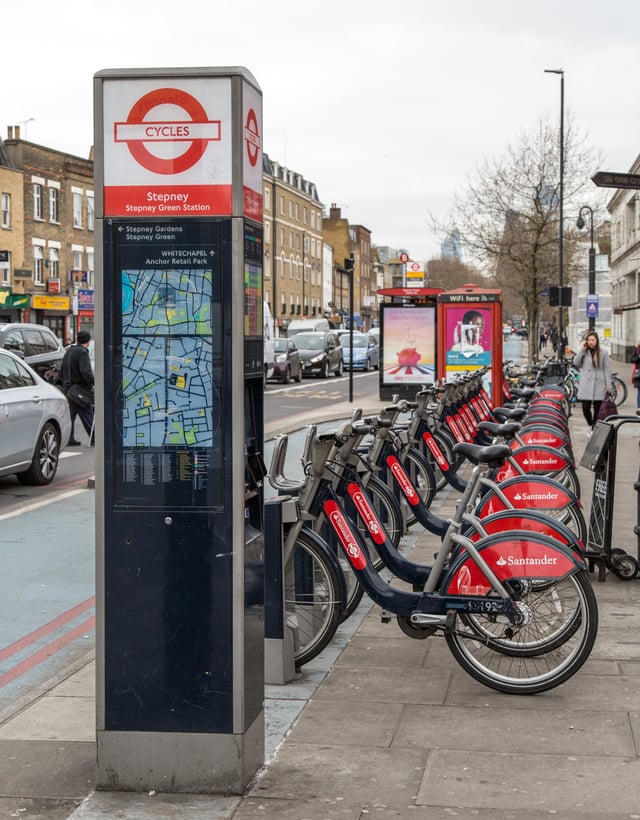 If you’re careful on the roads, London’s public bicycle scheme - Santander Cycles - can be an easy, economical, and environmentally friendly way to get around. There are more than 750 docking stations across the city and the Cycle Superhighway 2 (CS2) runs straight past the Queen Mary campus.

There are a number of useful bus routes just outside the campus gates, and the tube makes all of London easily accessible very quickly. Walk five minutes in either direction from campus and you’ll find yourself at a tube station. Within 20 minutes, you’ll be in central London.

From the tube, you’ll also find connections to the Docklands Light Railway (DLR), the London Overground, and National Rail services that head out of the city.

We highly recommend the CityMapper app, a fantastic guide to navigating the city.