Globalization has been a theme of this column on connecting global cities this year – and has featured more visibly in some months. This month seems to be the biggest one for this area because several globalization-related conferences have been happening and not at least one that is about to happen.

Photo: Globalization in Action Day Conference to be held in CAPA London

CAPA is hosting a Globalization Conference in London tomorrow which our students there will attend and other students in our European time zones will also be involved with in real time. Yet our students in more distant time zones will not be left out – they have already prepared insightful reflections in videos to be shown on the day. That includes videos of interviews I did with five CAPA students in Shanghai. I am sure we will return to the output of the conference once it has taken place.

For now, let’s consider what has taken place recently in other conferences. These have all been held in Asia, so that may tell us something. U.S. President Donald Trump has been out here to China to meet President Xi and visited the Forbidden City – a first such event for a foreign leader as an official banquet in that historic Imperial Palace. By coincidence, I am taking CAPA Shanghai students to Beijing and that same Forbidden City this week.

It was timely that China had held, in late October, its, once every five years, Communist Party of China political conference and reconfirmed President Xi and Premier Li in the leading roles for another five years, alongside five other and new members of the Politburo Standing Committee. While others in the top team have specific government roles, one new member is the party head from Shanghai and will also continue in that role. China watchers note that this underscores the role of Shanghai (the City of Experiment) in helping chart China’s continued economic development.

Both President Xi and President Trump, as leaders of the two largest economies in the world, were going to be busy after their meeting as they were attending other important gatherings and those included the APEC (Asia Pacific Economic Cooperation) Conference in Da Nang, in Vietnam and the ASEAN (Association of South East Asian Nations) Conference in Manila in the Philippines. 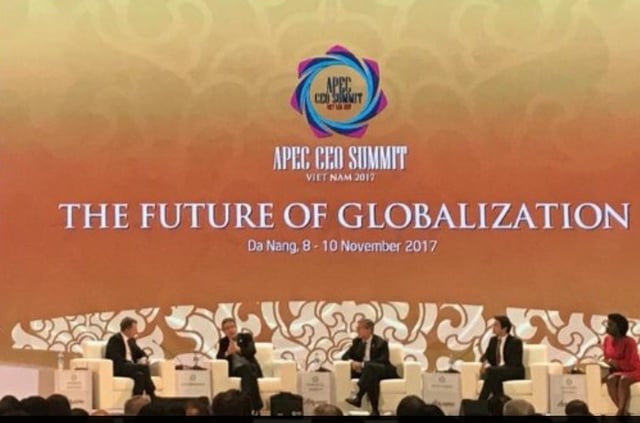 Globalization was a key topic at all these events, including at the APEC meeting a special session entitled “The Future of Globalization.” A contact of mine, presenting at that meeting, has kindly supplied a photo. Globalization has its supporters and its detractors and a battle is underway between those that would like to put more trade protectionism in place (to benefit individual countries) and those that believe that “a rising tide floats all boats” and thus all can benefit from globalization and the growth of world trade.

What has become clear is that history has been reversed – traditionally the U.S. has been the advocate of multi-lateral trade, being behind the formulation of the General Agreement on Tariffs and Trade (GATT), the forerunner of the World Trade Organization (WTO), and encouraging financial stability and investment through the IMF in the shorter term and the World Bank for long term investments. China, on the other hand, was somewhat isolated in the 1950s and 1960s and thus relied on bilateral trade arrangements only.

Today China is the champion of free trade and encouraging regional trade agreements while the U.S., at least under President Trump, prefers bilateral trade deals. Those regional trade agreements can be far reaching, with China, Japan and S. Korea working with the ten ASEAN members to attempt to create an open East Asian Economic Community and even beyond that a Comprehensive Regional Economic Cooperation that would stretch to other areas. Meanwhile President Trump wants to renegotiate the U.S. membership with NAFTA and is looking to a bilateral deal with a post-Brexit U.K. 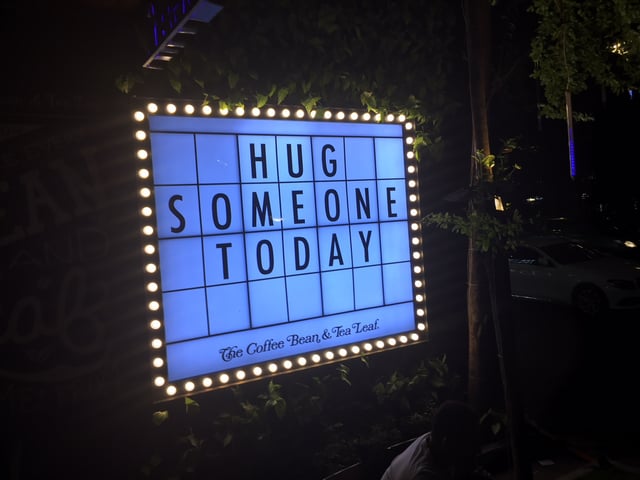 Photo: Globalization in Vietnam - a friendly message from a California Coffee Chain by Colin Speakman

China’s President Xi was a key speaker at APEC and he praised many of the results of an increasingly connected world. "Over the last few decades, economic globalization has contributed significantly to global growth. Indeed, it has become an irreversible historical trend," Xi said, according to a provided translation.

"In pursuing economic globalization, we should make it more open, more inclusive, more balanced, more equitable and more beneficial to all," the Chinese leader told the gathering of political and business leaders. In his speech, President Xi said the multilateral trading system must be improved and emphasized shared growth through consultation and collaboration.

"We should continue to foster an open economy that benefits all. Openness brings progress while self-seclusion leaves one behind," he said.

The future of globalization is more than ever likely to be in the hands of Asian nations willing to support it. This is not just China, but most nations in that region. President Trump may have withdrawn from the proposed Transpacific Partnership (TPP) but the remaining nations (Asian members) this week resolved that they wish to continue to develop TPP without the USA. We need to watch this space.