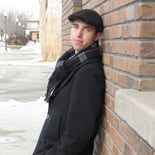 In this week's post, Caleb shares his adventures from his Chinese National Day holiday break.

Traveling without an itinerary can be dangerous, but I’m glad I did! This last week, I was in Huangshan city for the Chinese National Day holiday break. Before I boarded my train, all I knew was the address of the hostel I was staying at, and I knew that I wanted to climb Huangshan (Yellow Mountain). I did not want to make plans based on what I could find on Google because I wanted to see what locals would recommend. Thanks to the recommendations of my Airbnb host, I explored the ancient village of Hongcun and climbed Yellow Mountain, as well as spent one day simply wandering Huangshan city, among other things.

The city of Huangshan is situated in a valley of foothills near the mountain Huangshan, and although it was forecast to rain every day during my stay, it maintained pleasant weather until the last day. Monday, my first day there, I set out from the hostel in hopes of finding some cheap street food and to see what the city looked like. I quickly found a lady on the street making spiced fry bread, and with that to fuel me, I directed my steps forward in my favorite direction – nowhere in particular. Nowhere in particular led me to an obscure trail up one of the foothills, and a good view of the city. 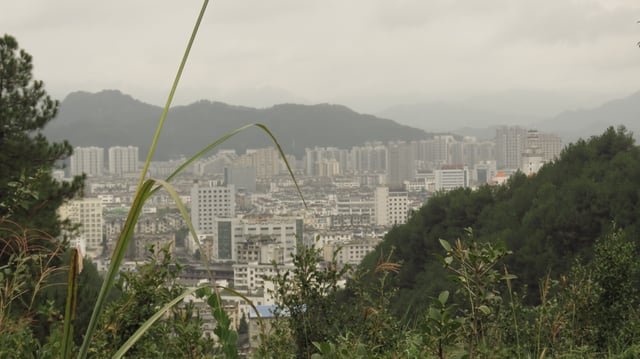 That night at the hostel, I met some Chinese college students from Wuxi. After talking to them for a while, we realized we were all planning to go to Hongcun ancient village the next day, so we decided to go together. Although we had to purchase tickets to enter the village, it is still lived in, and many of the residents set up small shops on their doorsteps or just inside their homes. As a UNESCO world heritage site, it had many tourists, but that did not detract from the beauty and quaint historicity of the town’s narrow streets and ponds. My new Chinese friends were staying somewhere else that night, so at the end of the day, we exchanged our WeChat IDs (Chinese form of texting/calling/social media) and I went back to the hostel to rest for an early morning the next day. 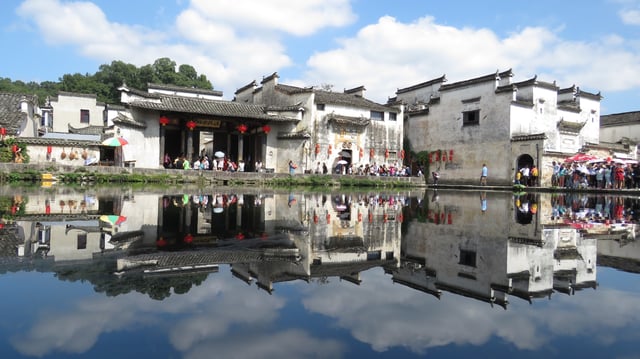 In order to catch the first string of buses leaving for Yellow Mountain at 6:00am on Wednesday, I woke up at 5:00 to get ready, and I planned on getting to the bus station by 5:40. I ended up getting to the bus station a few minutes earlier than I had planned, and was immediately swarmed by bus drivers trying to convince me that their bus was the best. Of course, since all I heard was a bunch of yelling in Mandarin, I picked one and followed her to her bus, leaving the other drivers to chase after other potential passengers. I got the last seat on the bus, which meant that I didn't have to wait for the bus to fill up, and we departed within a few minutes. I should have cherished those thirty minutes spent sitting, for I wouldn’t relax again until late that evening when I returned to the hostel – just over 25 miles of walking later.

In the US when I think of a trail, I think of a dirt path winding up the mountain. I should not have assumed that it would be the same in China. It was not a dirt path. Rather, the “trail” was a stairway straight up the mountain. I had been told that it is very difficult to climb the mountain and get off in one day, so I set a quick pace for myself. I found myself and another Chinese person climbing at about the same rate, so we started conversing, and spent the rest of the day together. 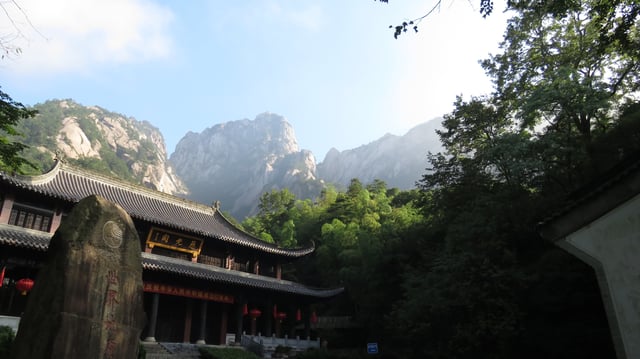 Photo: A traditional Chinese building a shortly after the beginning of the trail

The climb was very difficult, but I was put to shame when my Chinese friend and I began seeing people climbing while carrying various foodstuffs on the ends of a bamboo pole. I remembered reading online that the restaurants on the top of the mountain had to have their food carried up the mountain, but I did not imagine it like this. I seriously hope these transporters are paid well!

Photo: One of the many transporters climbing the mountain

Two and a half hours after I began climbing, I reached the “top,” and I say “top” because it was not the true summit, but merely the top of the gondola route. This meant that from this point on, every step had to be fought for through a dense crowd of people. I had heard that since I was going during a national holiday, it would be crowded, so I was surprised that the path was sparsely populated when I started climbing at the base of the mountain. As soon as we reached this area, though, my friend and I immediately had to aggressively fight to keep our position, much less move forward. After an hour of this struggle, we finally arrived at the summit, and it was as though I had only to reach out my arm to touch the sky. Being from Colorado, I need to see mountains every once in a while, especially after being in flat Shanghai; this was definitely the mountain I needed to climb! 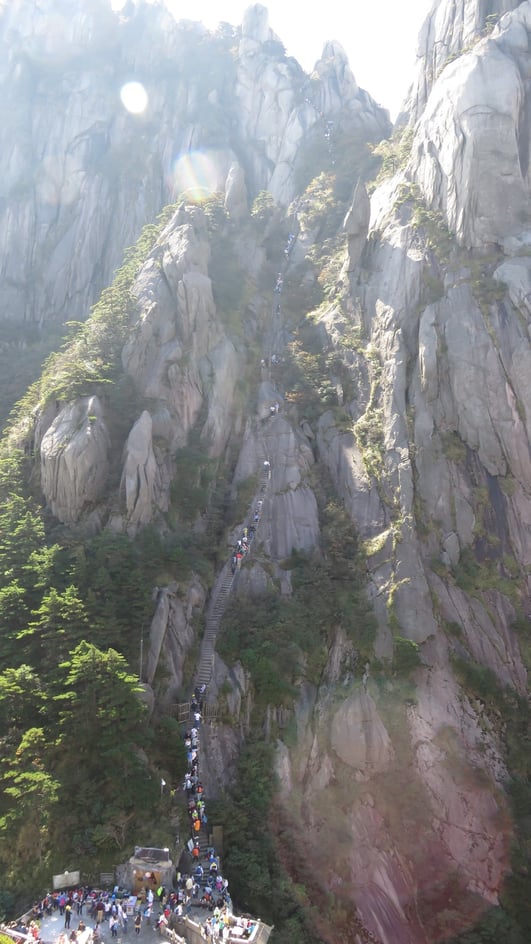 Photo: A slightly less populated stretch of the stairs near the gondola 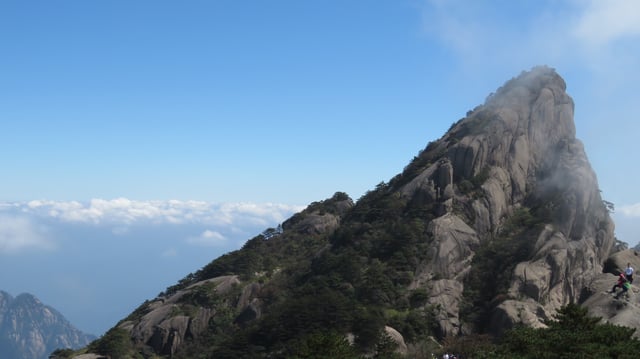 Photo: Just reach out and touch the sky

Exploring Huangshan city and learning more about China’s history and culture in Hongcun ancient village was fun. But climbing Yellow Mountain was… what shall I say to describe it? Breathtaking? Rejuvenating? Stunning? Magnificent? All of the above? Yeah, definitely all of the above. China is full of wonders, and my trip to Huangshan simply expanded my concept of what that actually looks like.