After a recent visit to Beijing from Shanghai with the spring 2019 students, Colin writes about the opportunities provided by CAPA for students to learn about their host city and other global cities around them. He compares and contrasts the features and local interaction of both cities, while describing how Beijing and Shanghai represent China globally, politically, and culturally.

CAPA believes in the benefits of studying in a Global City—and supports this through a signature course about that with the Global City and Student Learning Outcomes (SLOs) that include understanding the impact of Globalization and the living experience in Urban Environments and the diversity to be found there.

There is a well-established list of criteria that define a global city but it is quite a mix including: global connectivity, international economic/financial impact, multicultural diverse community, world-class arts, museums and universities, authentic cuisine from many countries, and political importance (partly reflected in the presence of international institutions).

Not all global cities score equally in these areas but reading the above list, it is clear why New York and London are the top two and are regarded as the two Alpha + cities in a major survey.

The leading global cities 2018 according to Globalization and World Cities Research Network.

Five of the other global cities in this top 10 list are in Asia and are part of the eight Alpha + cities—the list includes both Beijing and Shanghai.

That brings me to the topical nature of this post: I am writing most of it on a high-speed train (the Fuxing Hao) traveling at 350 km/h between Shanghai and Beijing. That speed with few stops whisks my students between these two megacities in just under 4-and-a-half hours (the old overnight sleeper trains needed 11 hours). 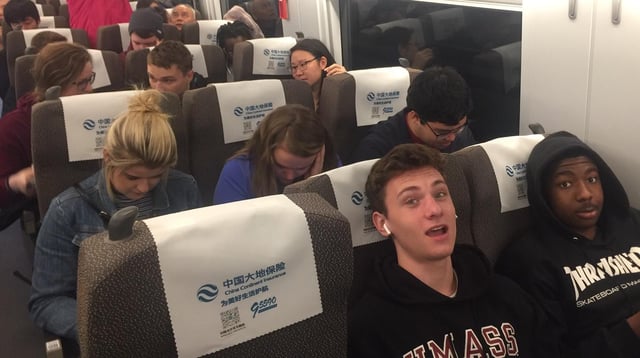 A CAPA group speeds between Shanghai and Beijing on Friday, March 22.

So join me vicariously as CAPA Shanghai students, after 5 weeks here (and knowing quite a bit about Shanghai), are invited to spend three days in Beijing to “Compare and Contrast two Global Cities”. They are both big, with Shanghai at close to 25 million and Beijing around 22 million, and I have lived in each for over 5 years collectively. Both have their own special features.

Let’s see how my students see the differences. Among our group is Malia, who is our Diversity  Advocate researching this area and taking great photos of cultural interaction. In the first two days we visited the area by the Temple of Heaven including the famous Hongqiao Pearl Market (a predominately copy goods market), Tiananmen Square, the Forbidden City, the Summer Palace, and a famous Hutong (Beijing’s historic narrow alleyways with single story courtyard housing). Those true Beijing symbols provide a great opportunity to compare with Shanghai. 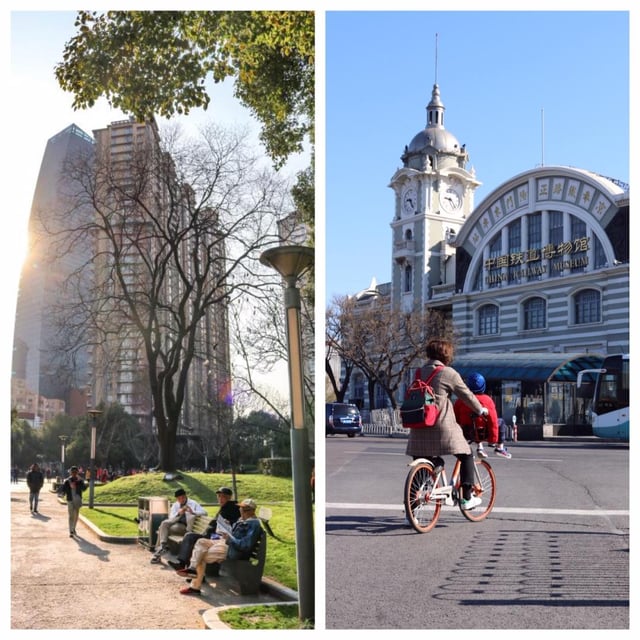 People watching in Shanghai and Beijing by Malia Waltman.

I asked students for reflections over a traditional Beijing Roast Duck group dinner at the end of the second day. For those that have not experienced this, whole ducks are sliced and served with crispy skin and eaten in a soft flour tortilla with added sliced cucumber, spring onion, and sauce. We also ordered some vegetables, chicken and beef dishes, local soup, and rice to complete the feast!

The first point of comparison raised was that Beijing seems to have more famous tourist sites (we sure saw the crowds despite coming during low season and not on a national holiday). Beijing is a city more students felt they knew before visiting, especially since the capital’s coming out party for the 2008 Beijing Olympics—and we knew Donald Trump dined in the Forbidden City during his state visit. Shanghai by contrast has fewer “things” that students knew about in advance, but there is great, though shorter, history to be found there with exploration (that's where CAPA staff come in handy!).

Both megacities have landmark squares. People’s Square in Shanghai has no lines, security-free entry, and cafes and green areas to rest in, whereas Tiananmen Square is concrete and has no cafes or areas to sit (one is not allowed to sit, in fact) and a long line to get through security with Chinese ID or foreign passport. The presence of the authorities is felt in the center of the capital. 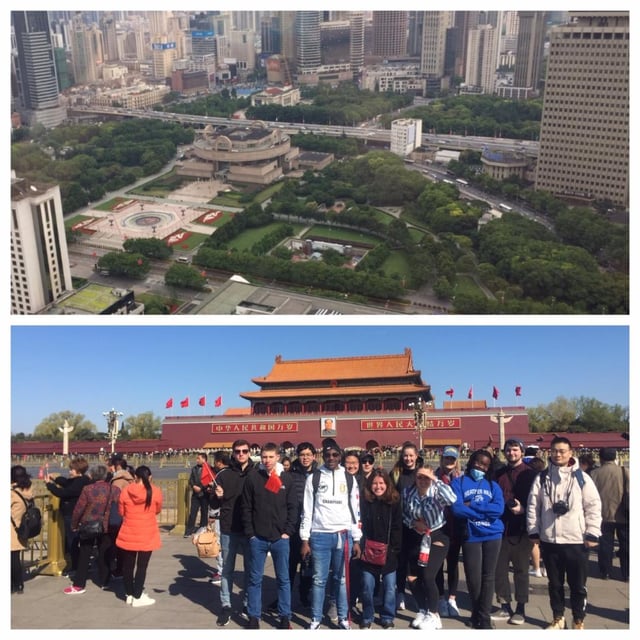 Another contrast my students spotted was the height of buildings. Among other nicknames, Shanghai is known as “the tall city” with four really high towers including the world’s second tallest, the Shanghai Tower, whereas Beijing only has one, the CITIC Tower, just completed last year. The Beijing authorities since passed a law that there can be no more very tall towers in the capital. The administrative center does not want to be overlooked! 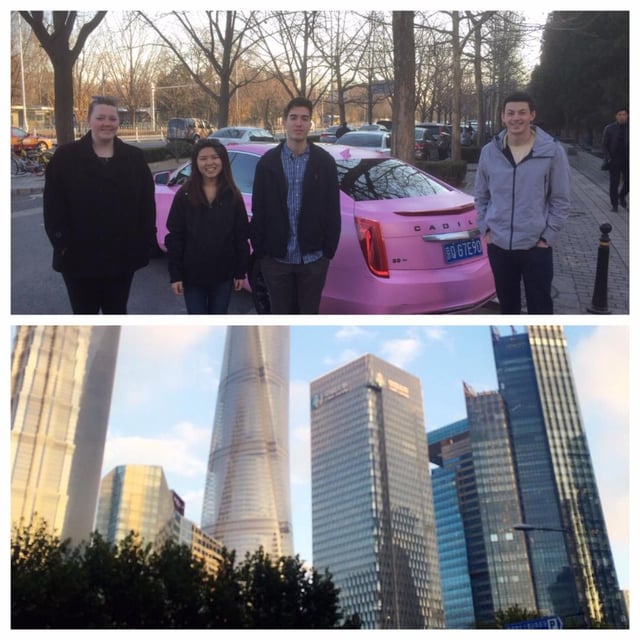 The typical low-rise buildings of Beijing vs. Shanghai's high-rise .

A final contrast discussed was the size of the two global cities. Although Beijing has a slightly lower population, it is spread out over a larger geographical area and this is necessary to accommodate residents in low-rise buildings versus those many high-rises that Shanghai dwellers live in.

Of course, there were similarities noticed too—both have great, modern, and extensive metro systems with Shanghai being the largest in the world and Beijing at number two. Both display ample examples of Globalization including loads of KFC, Mcdonalds, and Starbucks. Both have the convenience for visitors of Mobike shared bikes which one of our group took advantage of—and so did I! Security, as evidenced by closed circuit TV cameras and police all over the cities, is another similarity. 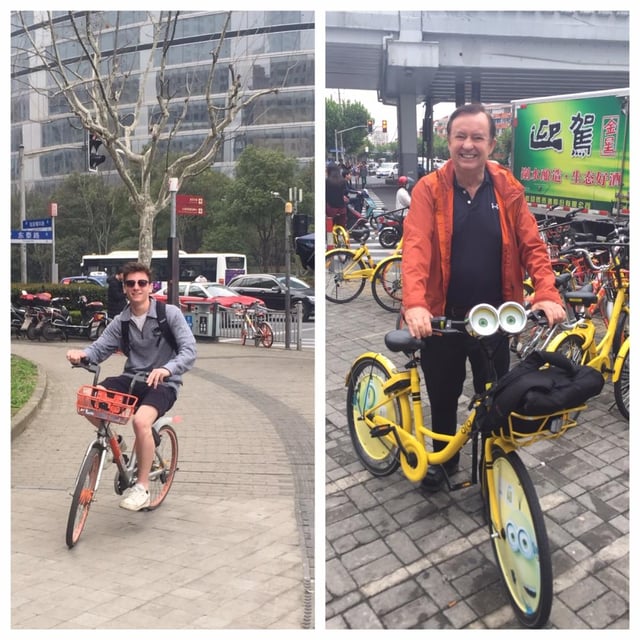 Our final day was spent visiting the historic area that makes Beijing most famous and the reason people say you must visit the capital if you are in China—the incredible Great Wall of China, exemplified by the section rebuilt in the Ming Dynasty after 1368 to protect Beijing from invaders from the North.  We also visited the traditional university area of Beijing, in the Haidian District, where like the area around our partner East China Normal University in Shanghai, we found that there are affordable places to eat. 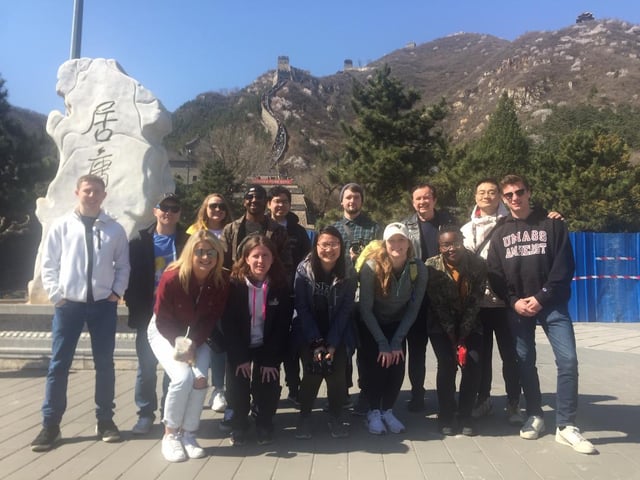 A CAPA group at the Great Wall on Sunday, March 24.

Back to the classic icon, personally feel that the Great Wall is not really part of Beijing, the global city, since it takes one-and-a-half hours to reach it by our private bus. It is rather like saying that one of the main features of London, as a global city, is that in an hour-and-a-half you can be in Cambridge! We actually do not say that!