Eating in London on a Student Budget

In this week's post, through her perspective as a nutrition major and a student on a budget, Joyce explores everyone's favorite topic: food.

As a nutrition major and a public health minor, it is part of my lifestyle to try to eat healthy while I am abroad. As a student, living on a budget is also part of my lifestyle. I’ve managed to find a balance between efficiently purchasing groceries and enjoying meals at restaurants that serve different cuisines while I’m in London.

I purchase groceries almost every day after my internship or class at the grocery store right below my flat. I like a variety of food so I’m not a fan of cooking a meal and eating the same thing all week. After all, I’m in London! I was super excited about the Shepherd's Bush Market beside my flat when I first got here but because of my schedule, I often miss the times they are open to pick up fresh fruits and vegetables. Instead, I buy my food at the grocery store right outside my flat. It is a pricier store compared to the one a 10-minute walk away but I still manage to make the best out of my budgeted eating experience and convenience.

I recommend buying from the markets if you can. It is much cheaper for fruits and vegetables. For example, my flatmate was able to get six kiwis for £1 at the market but I was only able to get four for the same price at the grocery store. Every little bit adds up to me and the little bits I save I put towards other things.

I’ve been sharing this tip with a few new friends and my flatmates have been witnessing this for weeks now. I’ve only been purchasing foods at the grocery store that have a sale sticker on them because they are about to throw these things out at the end of the day. Here in London, most grocery stores have a convenience section full of ready-made meals. At the end of the day, whatever is supposed be thrown out at the end of the day goes on sale later in the afternoon or early evening, right around the time when I come home from class or internship. How convenient for me! I’ve been eating whatever is on sale at the grocery store. I’m quite open minded with food so I would purchase a prepared meal if I didn’t feel like cooking. I eat it right away for dinner. I would also purchase a sandwich marked to be thrown at the end of the night for breakfast or lunch the next day. I don’t believe that it immediately spoils as soon as the clock hits midnight. But that’s my personal judgment. I thought of purchasing items in bulk like I would back in the US as a student. But who actually enjoys eating the same thing all week? I noticed most produce in the grocery stores come in a package of some sort and are dated with a best by date. Once the date that is marked rolls around, they’ll put a discount sticker on it to try to get rid of it. At the end of the day, those items are pulled from the shelves and won’t be sold anymore. I’ve seen produce in much worse conditions on the shelves in the US. I also purchase whatever fresh vegetables they put a discount sticker on and cook them immediately. Here are some things I’ve picked up on sale. 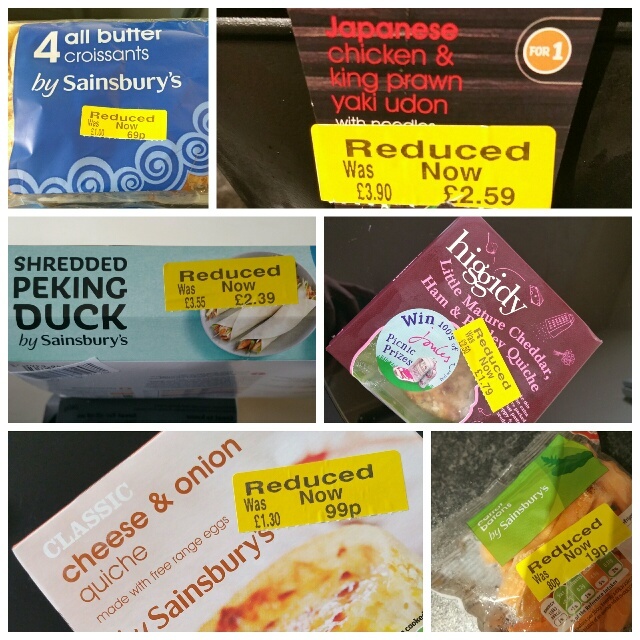 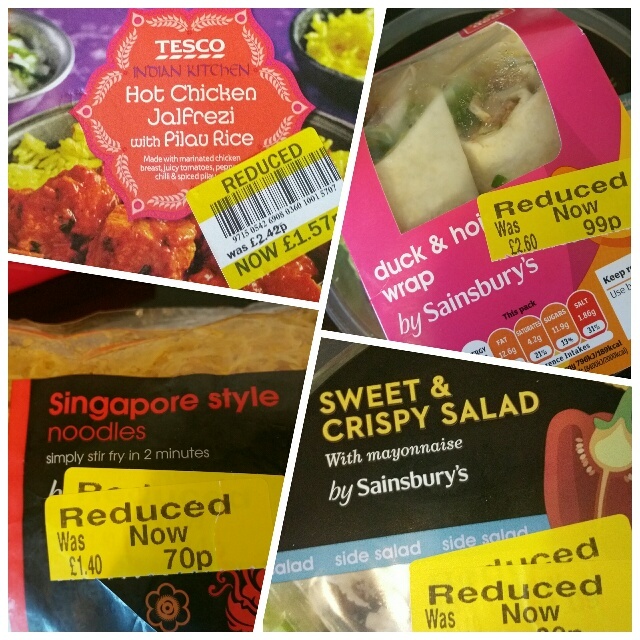 I must say, not being a picky eater helps with the budget. I typically wouldn’t purchase some of these things otherwise. But I’m definitely open minded about trying new foods. Here are some sandwiches I didn’t think I’d see available in regular grocery stores. 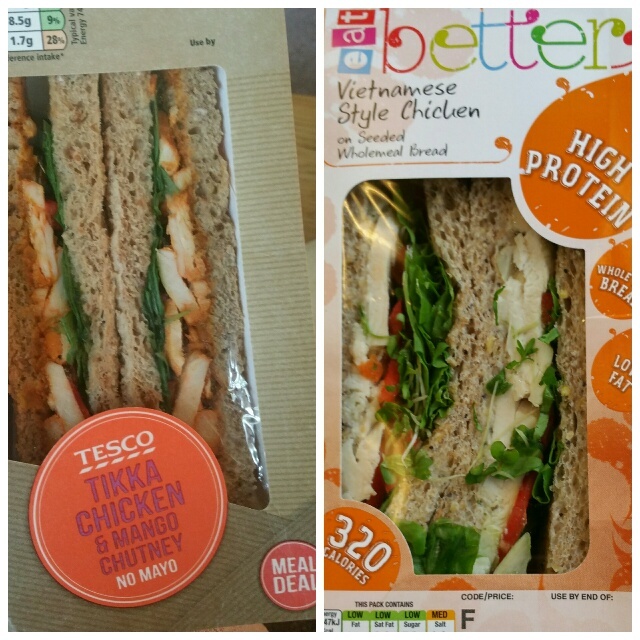 With the money I save from groceries, I spend comfortably dining out at restaurants around London. Here is a list of places I’ve tried. This doesn’t mean these places are the best. It’s just some places I’ve tried.

This place serves traditional English breakfast for a great price. The line was all the way out the door on a Saturday morning! Though the line was long, it moved quite quickly. So if you decide to drop by, don’t be discouraged by a long line up. You line up, order, pick up your food, then sit down and eat. They prefer you not to sit down until you’ve ordered. They also prefer you don't sit at a table with more seats than you need. The man stopped service to tell a couple that was about to take up a four seater table to move to a corner table with two seats. I was worried about not getting a seat at first. But the environment is quite fast-paced. People get up and leave as soon as they are finished. Here is my order: 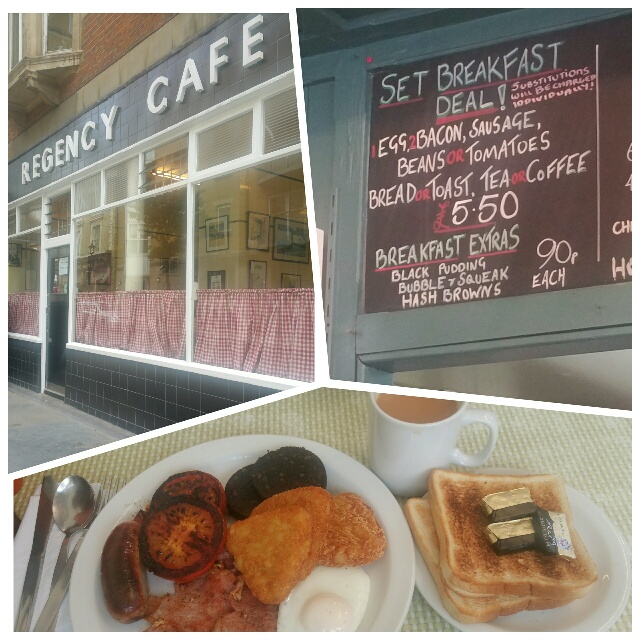 Apparently, black pudding is not a very well-liked British menu item. I was told what it really was. It didn’t sound too appealing. But I tried it anyways and thought it tastes just like a black bean burger.

This was the first time I’ve tried any cuisine from Africa and it was delicious. This small restaurant had art hanging from every wall and was beautifully decorated. There were no more than 15 seats when I walked in but as the place started getting busier, they were seating people downstairs. I didn’t get to see downstairs. I’ve been to a variety of Caribbean and South Asian restaurants before and I noticed the names of items on the menu at the African Kitchen Gallery were similar. It sure tastes different! I ordered jollof rice to share with my table and a dish of coconut chicken for myself. It was wonderful! I’ve attempted to make both of these foods before I came to London but it sure did not taste like that! The man served us a plate of dessert on the house. I didn’t quite understand what it was but it was free so it would be silly not to try it. It had coconut and it was delicious. 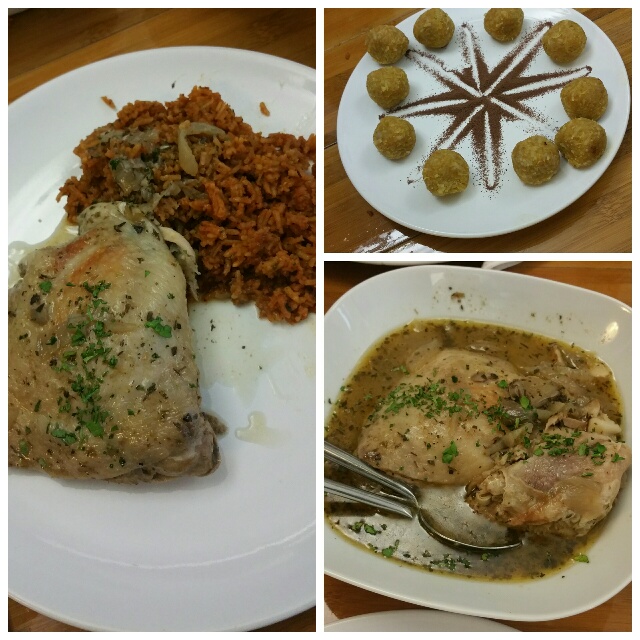 Here is a scotch egg I had at the Greenwich Market. 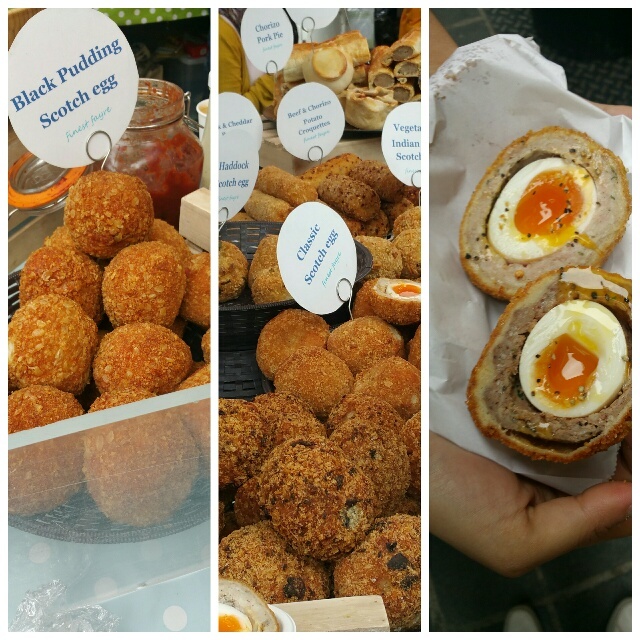 Their sign caught my attention. It was something around £10 for a meal, which is relatively cheap for London. This is what it looked like. It was much more flavorful than I expected! I went home and ate a tub of yogurt to save my tongue. Enough said.

I haven’t made it to Brick Lane for more east Indian food yet but I sure will!

This little South East Asian cuisine is right by my internship office. It is a convenient quick stop for lunch and I especially like this place because it cost the same to eat in or take away. Some places charge more to eat in the restaurant in London. I wasn’t used to that when I arrived. My favorite item on the menu is the Massaman curry chicken, which is more of a Thai dish.

This chain restaurant is quite common in London. They serve a fusion of east Asian cuisine. I ordered a pork belly ramen. I’m usually not a fan of chain restaurants but I stopped by for convenience one day. There was quite a bit of variety on the menu. Here is what it looked like. 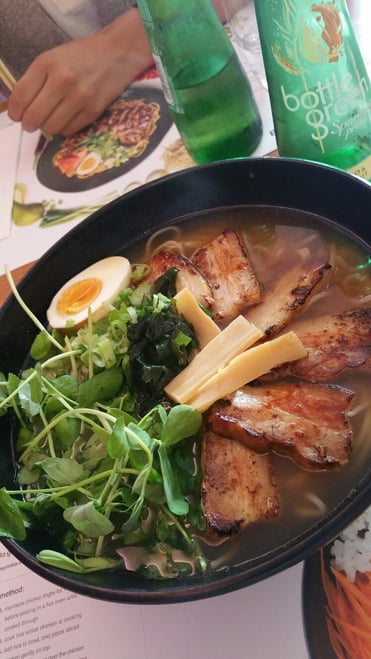 These are just some of the things I’ve tried in my time here. With less than two weeks left, I hope to try a few more cuisines!