Experiencing Halloween in the Country that Started it All...Ireland!

In this week's post, Casey makes the most of being in the country that started Halloween ON Halloween. Read more to hear about the unique ways Halloween is celebrated in the place that started it all, Dublin, Ireland!

Halloween is fun and all in America, but there’s something about celebrating it in the place it originated in. That’s right, Ireland is the original Halloweentown! No, not like the Disney Channel original movie. Originally called All Hallows Eve, Halloween was a time to build huge sacred bonfires, wear costumes usually consisting of animal heads and skins. This isn’t something that is done anymore, it’s more about the funny costumes like being a minion or being Napoleon Dynamite.

Unlike our festivities in America, where little kids go out for candy and adults throw wild parties, some of the festivities in Ireland during Halloween are more centered around tradition. They have festivities like a Mary Shelly poetry reading, the Bram Stoker festival, and a parade with giant spooky floats. 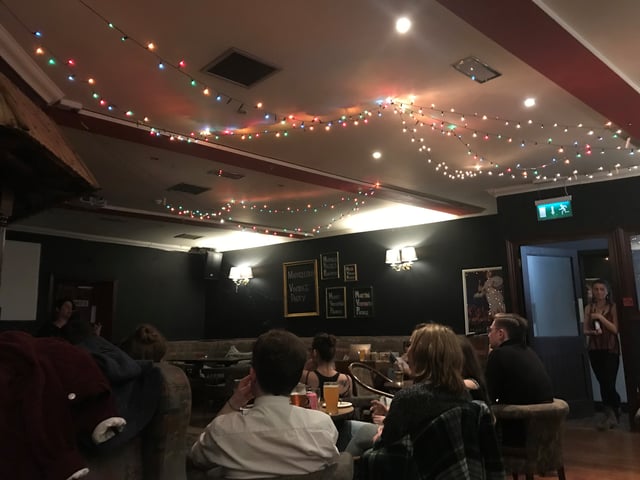 I decided to get into the spooky spirit and attend these events. The Mary Shelly poetry reading was on a Thursday night and was on the calmer side compared to other events. Mary Shelly was the author of Frankenstein, so the theme of the poetry was supposed to be focused around her, Frankenstein, or other monsters, and women who have to hide behind a man’s name to get their work published. Some of the poetry was very serious, but there were those who made it funny. One of the readers rewrote the lyrics to Monster Mash to go along with Mary Shelly. It had the whole crowd laughing so hard our stomachs hurt.

The Outside of Marsh's Library where the Bram Stoker Festival was held.

The weekend was filled with Bram Stoker events as well to celebrate Dracula. One of the events was a visit to Marsh’s Library, which is located next to St. Patrick’s Cathedral. It is where Bram Stoker spent a lot of his time and where many rare books exist. For someone who is obsessed with books, I was more than happy to stare at them for a while. We weren’t allowed to take pictures in the library or touch any of the books, but even the outside of the library was gorgeous so naturally I had to take a picture. St. Patrick’s Park was where a lot of the other events for the Bram Stoker festival took place, such as Stokerland that consisted of a lot of family events. 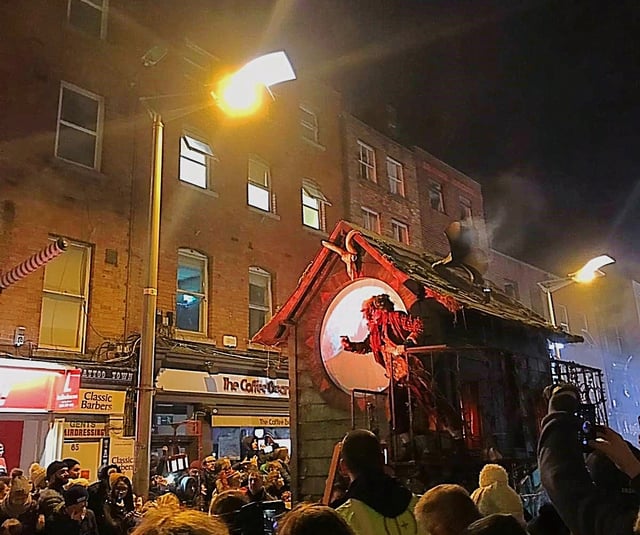 Monday night was the finale of the festival, the big parade. This parade easily had thousands of people show up for it on the streets. My friends and I were near the end of the parade where it was slightly less crowded, but being 5’2 means that unless I’m in the parade then I can barely see what’s going on. Luckily I have tall friends like CJ who is in CAPA with me and could take pictures for me. This parade was one of the most intense Halloween parades I’ve seen. It had these forest creatures, drummers, scary mummy looking things that got in our faces, and giant person that kind of looked like a goblin or E.T. 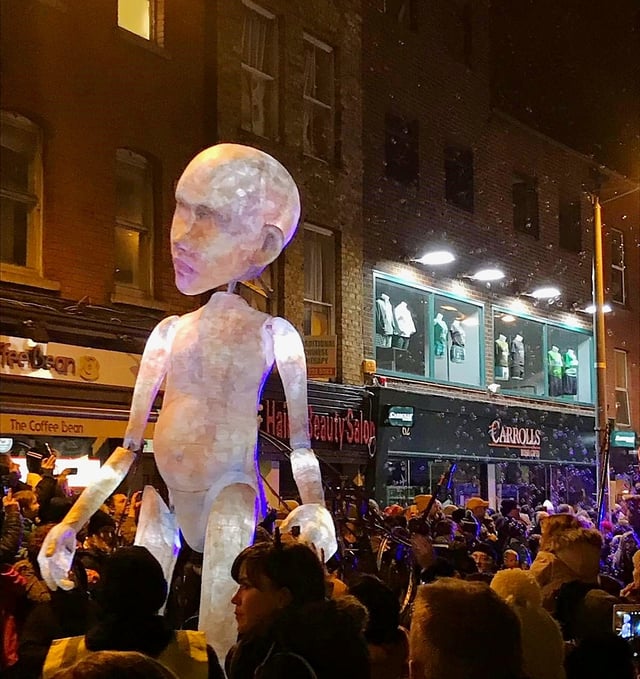 On of the interesting figures from the Halloween Parade.

Halloween is one of my absolute favorite times of the year and I’m glad I got to enjoy some of the festivities in the place that it was invented. Unfortunately, due to Halloween being in the middle of the school week I can’t celebrate too much, but I’ll definitely watch Beetlejuice or Hocus Pocus so I can still be in a spooky mood.

Happy Halloween and much love to all my family and friends!