Here’s What It’s Like to Attend Ireland's Gaelic Football 'Superbowl'!

The CAPA Dublin Fall 2019 students were lucky enough to arrive in time to partake in an important national event - the Gaelic Football Championships! In this blog, Ellie talks about her experience touring Dublin' s Croke Park during a CAPA My Global City event, and how that inspired her and her fellow students to go all-in and immerse themselves in the Irish sports culture!

Greetings from Ireland! In today’s blog, I discuss Gaelic Football, Croke Park, the history that has just been made, and my experience attending an Irish sporting event. CAPA was generous enough to take us on a tour of the stadium the day before the game which is something that I will never forget.

Upon arriving in Dublin, one of the first things that was mentioned to me was the sport of Gaelic football and the big game that was to occur on the 14th of September. Even as our taxi driver drove past the stadium on the way to Griffith College, he mentioned that Saturday’s game was equivalent to the U.S’s Superbowl! The taxi driver did his best to describe to us four Americans the game of Gaelic Football, little did we know later on in the week we would be lucky enough to witness a finale game and sit in the locker room that the Dublin team uses.

The Sam Maguire Cup is the trophy awarded by the Gaelic Athletic Association to the winner of the championship game each year.

I will now do my best to describe Gaelic football. However, I only learned about this sport when I arrived here in Dublin, so bear with me. This is an extremely fast paced sport, combining features from rugby and soccer. The games are 70 minutes long and the clock runs continuously like it does in soccer. There are 32 teams that compete, one team for each county of Ireland. There are 15 players on the field at one time for each team. There seems to be only a few substitutions during the game, and it is continuous so the game does not stop to make a substitution. At the “goal line” on the short sides of the field is a soccer net with goal posts extending up from the posts of the goal. Each team works together to score as many points as possible.  If the ball flies above the net and through the goalposts it is one point and if the ball is sent past the goalie and into the net it is three points. A player can run with the ball like a rugby player for approximately four steps before bouncing the ball on the ground or kicking the ball back to themselves (a player cannot bounce the ball on the ground twice in a row). The sport is pretty aggressive and players can hit shoulder-to-shoulder, but a penalty will be called for holding or tripping. This sport is awesome, and all of the CAPA students seem to really enjoy watching it.

On Friday, the day before the big game, we were lucky enough to take a day trip to Croke Park with CAPA. Croke Park is a massive stadium that has the capacity to fit 82,300 people; in fact, on Saturday for the championship game there was not an empty seat in the stadium. The championship game is historically always played in at Croke Park in Dublin, so it was super exciting for team Dublin to have both their men's and women's team in the championship game.  The tour we received from Keele, a club football player, was incredible. We began the tour with a short film created by the Gaelic Athletics Association (GAA) which introduced the game and honestly gave me chills! The video really emphasized the pride and passion that both the players and the fans have for their sport and their county. Once we got the rundown on the sport we were taken on a tour of the stadium; from the locker rooms, the massive field, to the Hogan Stand (where we sat during the women's match). Our tour guide, Keele was full of information about the sport and answered the many questions that our group had. He then even allowed us to try out both Gaelic Football and Hurling (another spot played at Croke) in a game area which was a great way to finish up the tour. 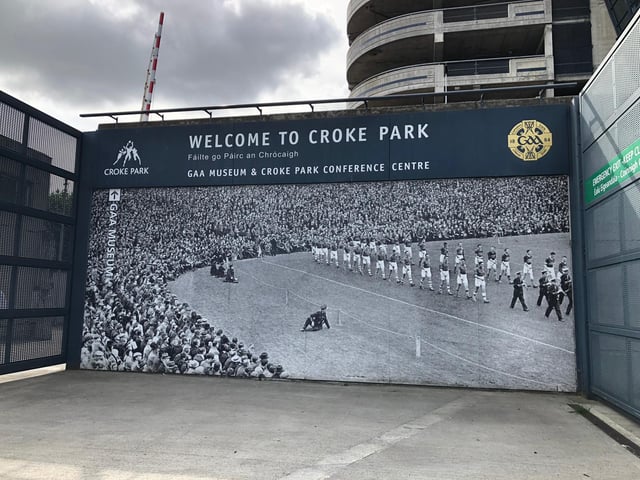 It is inspiring to think about all the history and memories that have been made in this stadium.

The day after the tour I could feel the city’s excitement for the big match up between Kerry and Dublin for the men’s championship match. There is a big rivalry between these two teams due to their successes in the past. A large reason why this specific championship was so highly anticipated was due to the fact that Dublin could make history and become the first team to win the Sam Maguire Cup for the 5th consecutive year. Even though Kerry has won many more championship games, they have never won more than 4 consecutive, so Dublin was really hoping for a win against their biggest opponent. A bunch of the CAPA students and I were able to find local pub to watch the game with some locals which was very exciting! There were a lot of cheers of excitement and bursts of aggression during the 70 minute game, but in the end… Dublin won and the pubs, stadium and streets erupted in cheers! 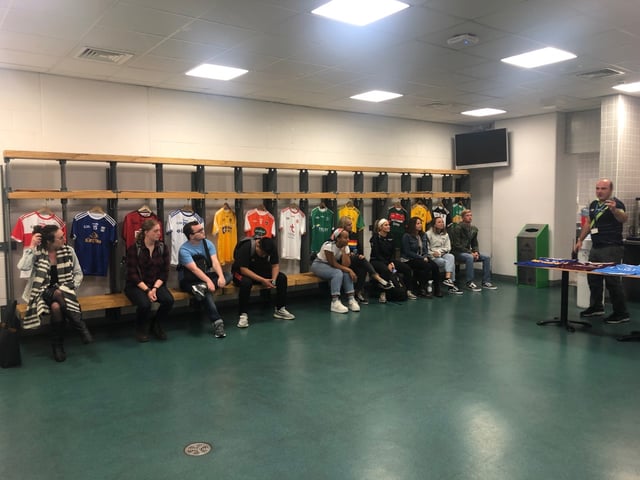 Keele, our tour guide, took us into one of the locker rooms set up with all the team jerseys!

The next day the women's team of Galway and Dublin played at Croke and I actually was able to purchase tickets and attend the game. It was incredible to witness the game in person and feel the excitement of over 56,000 fans. During halftime it was announced that history had been made again with a record number of fans at the women's match (up 5,000 from last year's championship)! The crowd went crazy when they realized that a new record had been made, which reiterated to me the love that Ireland has for this sport, no matter what teams or gender is playing. In the end, Dublin ended up snagging the women’s championship title as well and swept the Championships! 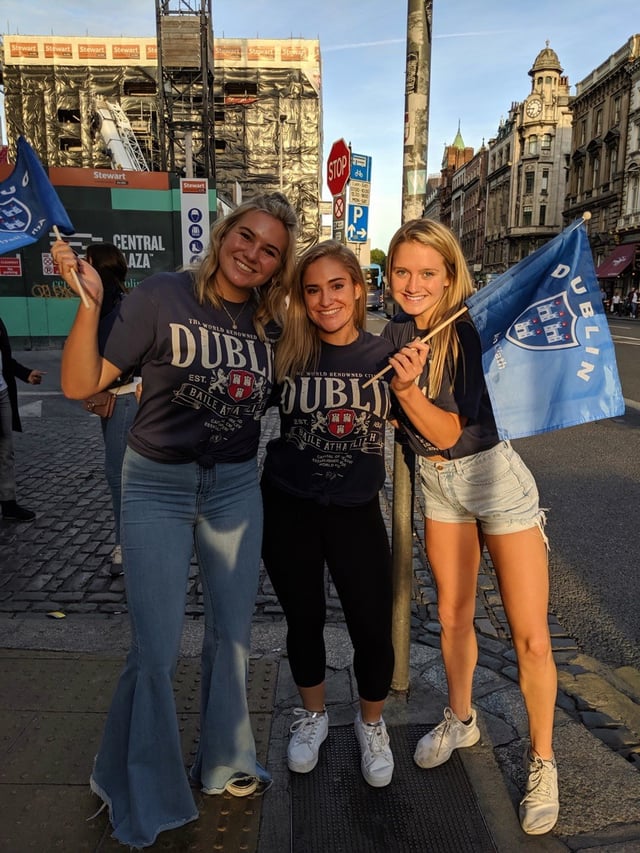 We were decked out in blue to support Dublin!

In closing, I would like to thank CAPA for the wonderful experience it gave us. The tour of Croke Park not only enlightened our group on the history and logistics of the sport, but it also increased our hype level for the game. Many of us walked into that Stadium as bandwagon fans and left as true fans. Go Dubs! 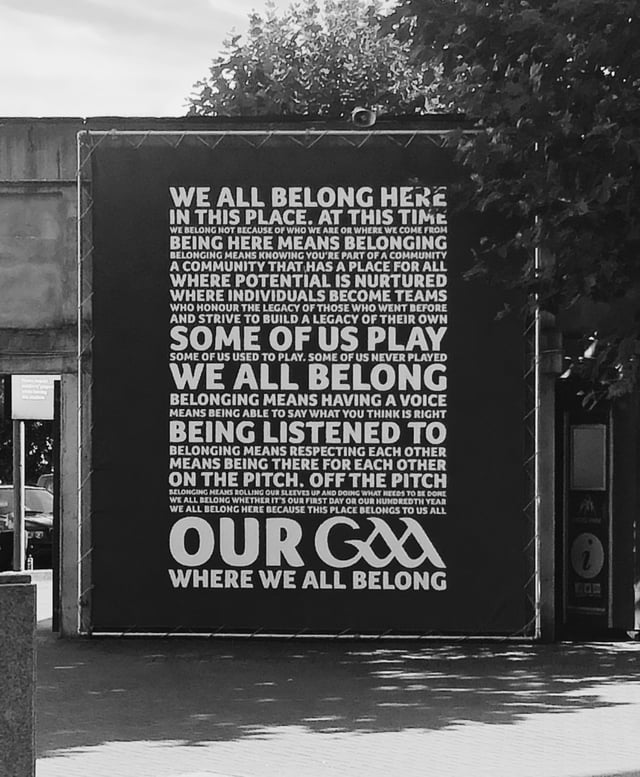 This made us all feel super welcome, not only in Croke Park, but in Dublin too! 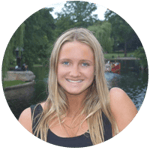