Exploring Dublin Through Its History

In this week's post, Brandon brings us along for a class field trip in Dublin and learns more about the city's history.

My favorite class at Griffith College so far is a CAPA-directed course called Analyzing and Exploring the Global City: Dublin. The Global City: Dublin class is meant to give students a well-rounded picture of Dublin looking at both the contemporary period and historical past. In doing so, there is a focus upon dissecting the individual phases of Dublin's, and Ireland's by extension, growth. The class is taught by Dr. Darren Kelly, who works closely with the CAPA team here in Dublin and also presides over the Global Internship Program class that meets every week for those participating in an internship while abroad. 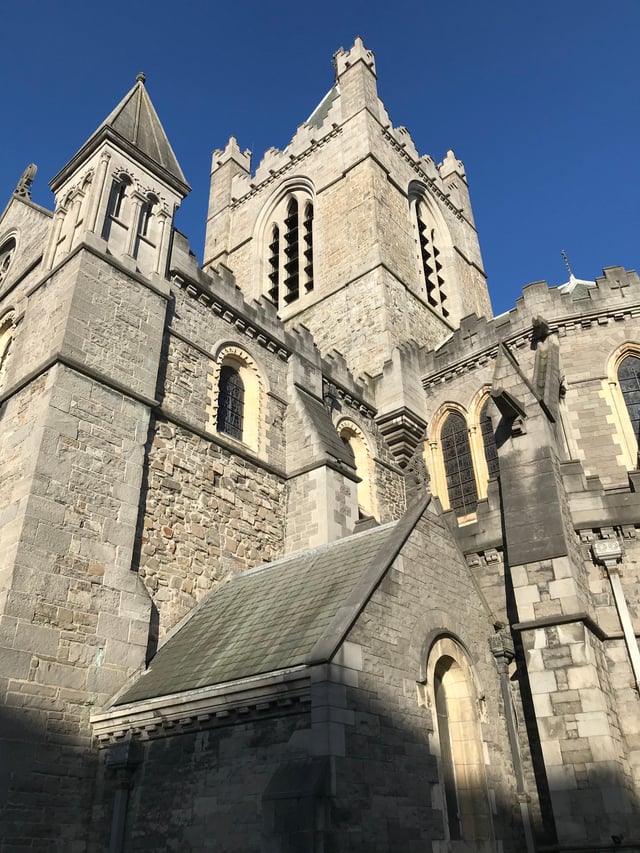 Christchurch Cathedral is located right in the city center, and it is my favorite cathedral in Dublin because of its historical value and being built right next to the original Viking settlement of Dublin.

In class, we have recently begun a discussion and investigation of Dublin's original settlement and creation by the Vikings. Fun fact: Dublin got its name from the Irish word Dubhlinn, or "black pool." This refers to the dark tidal pool formed by the River Poddle meeting the River Liffey in what is now the city center of Dublin. This created a favorable, deep point for the Vikings to land their ships.

We often go on field trips across Dublin for our Global City course, with each trip relating to the content that we are studying in class. This week, Dr. Kelly had us go to Christchurch Cathedral to see the imprinted tiles of Viking artifacts scattered on the sidewalks around the church and along Fishamble Street, West Wood Quay, and St. John's Lane. Each tile shows a selection of tools, weapons, jewelry, or other relics recovered from archeological finds of the original Viking settlement of Dublin. 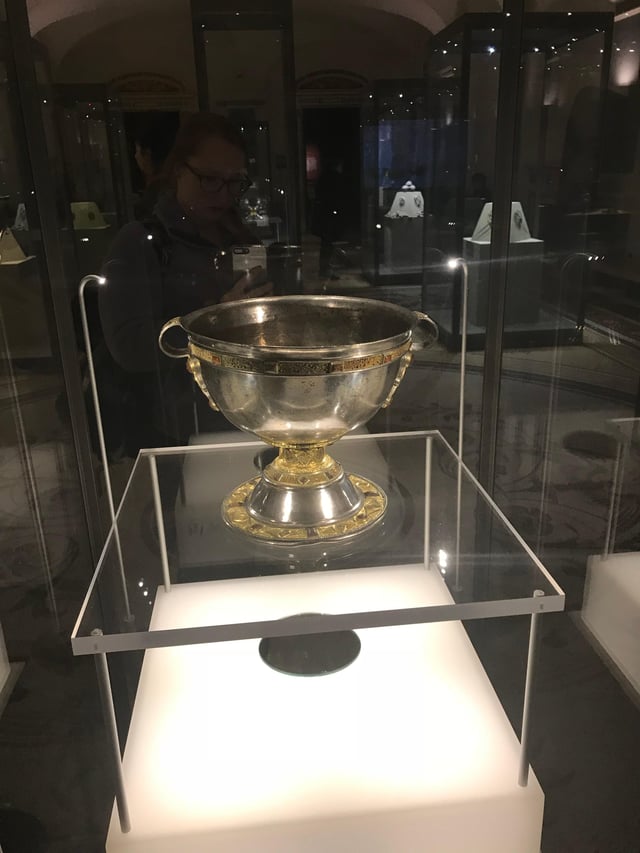 The Aradagh Cup, which is what the Sam Maguire Cup was modeled after.

We were also instructed to walk to the National Archaeological Museum to see the exhibit on the Vikings and the selection of other treasures. We had to match the artifacts we saw on the imprinted tiles near Christchurch Cathedral to the actual artifacts they were modeled after in the museum. We also saw gold bracelets and other jewelry, along with ancient Christian relics such as crosses and crooks. In addition, there was the Aradagh Chalice in the Treasury exhibition, which the Sam Maguire Cup was modeled after (the All-Ireland Senior Football Championship trophy cup I spoke about in my last post). 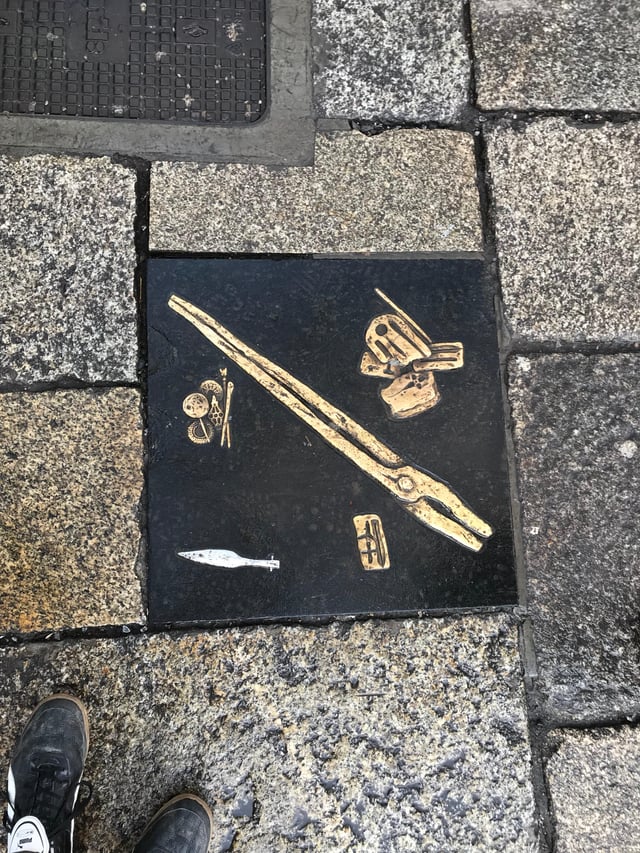 An imprinted tile on the sidewalks with some Viking artifacts and jewelry in it.

As a class, we previously went on a walking tour of the Portobello neighborhood around Griffith College lead by Dr. Kelly. He explained how gentrification has greatly affected the demographics of the neighborhood, with the former Muslim community being replaced by more wealthy, young professionals who see the Georgian, red-brick row houses as being fashionable homes.This movement of white-collar workers into Portobello has caused real estate prices to soar, with the average home around Griffith College going for upwards of $700,000. There is also extensive re-modeling and expanding of these row houses, with the traditional backyards being bull-dozed over to make room for housing extensions. 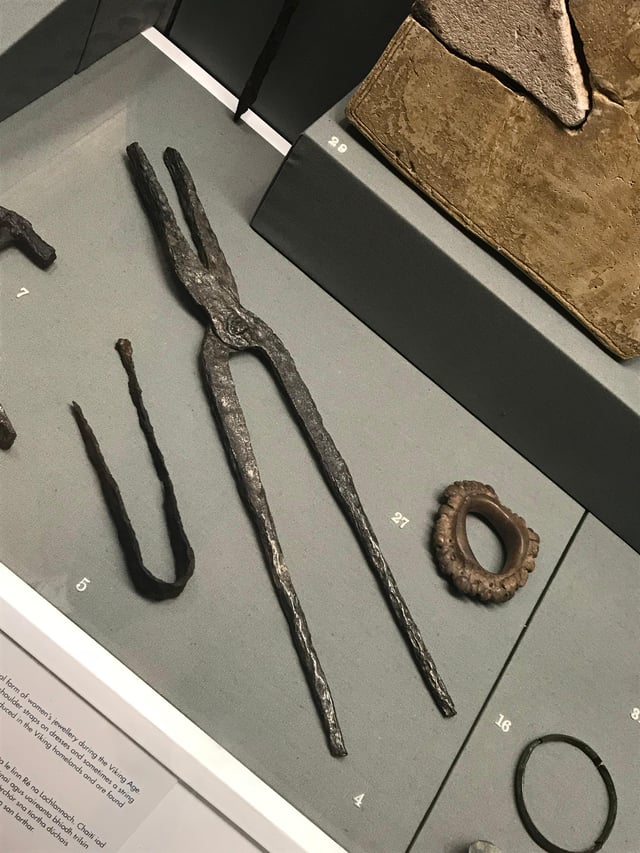 Some Viking artifacts in the National Archeology Museum. As you can see, you can match the metal tongs to the ones depicted on the tile outside.

Dr. Kelly talked of how before working as a professor, he worked in this neighborhood, and how its face has completely shifted as immigrants and lower-wage earners have been forced out by affluent, newly-graduated professionals working in computing or business.

I have used the new knowledge acquired in this course to better understand Dublin. When you walk about the city, you see architecture styles change, street layouts shift, houses of worship altar, and so much more. Dublin is a metropolis filled with history and is constantly evolving. 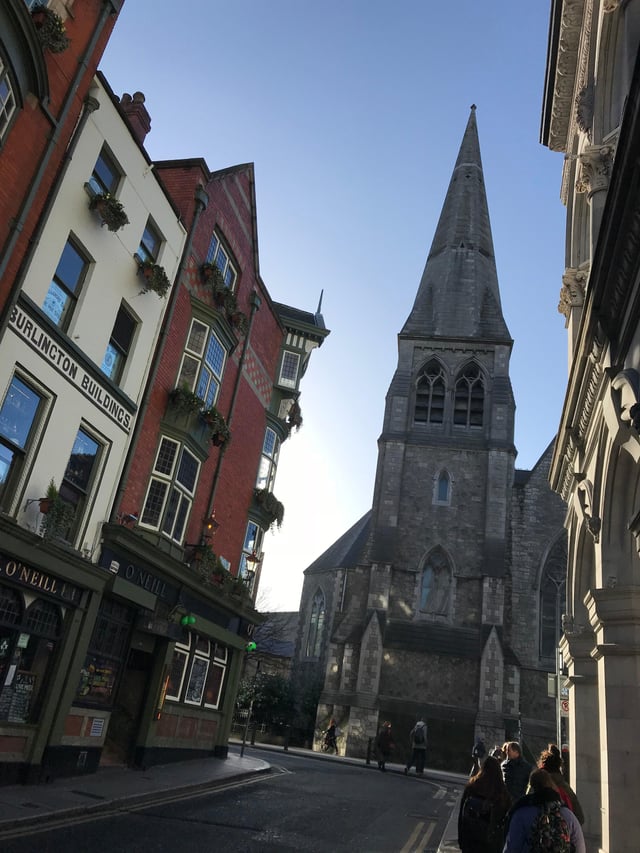 The walk from Christchurch Cathedral to the National Archeology Museum. You can see the older, stone church constructed against the much more modern, almost Germanic architecture around it.

Within a short, 20-minute walk from the Portobello neighborhood around Griffith College to the city center, one see's the surrender of formerly immigrant neighborhoods to the new workforce of young white-collars, the passage of British rule shown in the Georgian-style buildings, and the former Viking settlement that began it all. The Global City course causes me to appreciate and see past the veil of urban hustle-and-bustle to the history behind it.

I hope you enjoyed my latest post about my favorite course at Griffith College! I look forward to writing my blog post for next week.