In this week's post, Seth takes us to three different museums and a fashion show, teaching us about style and design.

London, being one of the “big three” fashion hubs, has an abundant supply of fashion-related things to do. Whether it be museums, shows, shopping, or festivals, I was excited to explore it all. Initially, prior to arrival, I had assumed that I would be visiting all the events alone; not many people—in particular males—have the interest to invest hours into clothing. However, to my delight, another CAPA student found out about my fashion interest whilst reading my blog, and suggested we explore London together. I was thrilled to have found someone willing to indulge my interest.

Photo: view from inside the Design Museum

Our first trip together was to the Design Museum for a Cartier exhibit. The Design Museum recently relocated to the Kensington area, taking over the former Commonwealth Institute building that had stood abandoned for over a decade. John Pawson, the architect in charge of the renovations gutted the place, only electing to keep the anomalous copper-covered hyperbolic paraboloid roof, building a modern museum beneath. The end result was a juxtaposition between a harsh, industrial exterior and a modern, fine-tuned interior; the perfect building for a design museum.

The Cartier exhibit, titled “Cartier in Motion,” was an innovative approach to presenting the genius behind Cartier. Instead of going the conventional route, simply displaying the magnificence with some cliched retrospective title, the curator, Norman Foster, examined how Cartier evolved in tandem with the aircraft and inventions of the time. The exhibit takes off in 1904, when Louis Cartier was credited with inventing one of the first wristwatches for his pilot friend Alberto Santos-Dumont, to enable easy access to the time whilst flying. From that point forward, it follows Cartier as his designs become more intricate and the inner-mechanics of his watches become more labyrinthine. This is all matched to the innovation that was happening in the world at large, with a specific focus on Paris.

The second trip my fashion buddy and I went on was to Shoreditch, the same street art-laden area I discussed in my last post. The beginning of June is Graduate Fashion Week in London; a massive yearly event at which every fashion program around the United Kingdom has the opportunity to showcase their graduating seniors’ best works. It was held at The Old Truman Brewery, a former brewing plant that has been remodeled and now houses a myriad of artsy events and exhibitions. For this event, the building was set up in a trade show format, with each school receiving their own block of space. 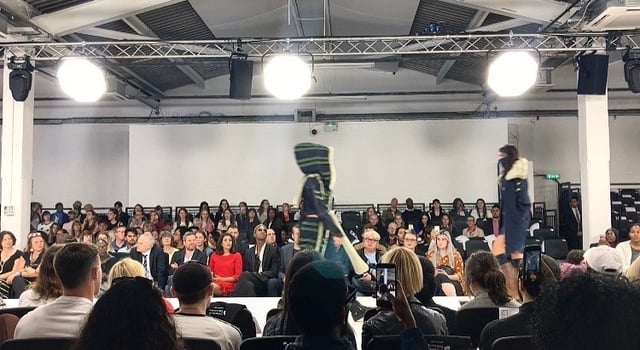 Although weaving in and out of the different spaces, exploring the different schools, was incredible, the true event of the night was the fashion show presented by University of East London. One of the teachers at CAPA works at the University of East London and was able to secure a bundle of invitations, which he generously gave to CAPA students. The fashion show featured about twenty different students, with an even distribution between menswear and womenswear. The show was utterly breathtaking.

The lights dimmed. A few moments passed. Then: the fluorescent beacons barraged the runway, while, simultaneously, the speakers began pumping out the abrasive industrial music that has come into vogue in recent years. The first group of models began walking, and I was like a sailor to the Sirens. For the next forty minutes, I did not take my eyes off the runway, completely enthralled, soaking up every second of my first fashion show.

One of the other exhibitions we have had the opportunity to visit was at the Fashion & Textile Museum. It’s a relatively small museum, only four rooms. The museum only houses a single exhibit at a time, rotating every few months. Currently, the museum is presenting an exhibit on the American designer Anna Sui. Prior to visiting, I was not very familiar with Sui’s work. I had really only heard her name in passing. Fortunately, the exhibit offered a fully fleshed-out examination into not only her work but also her life and inspirations. 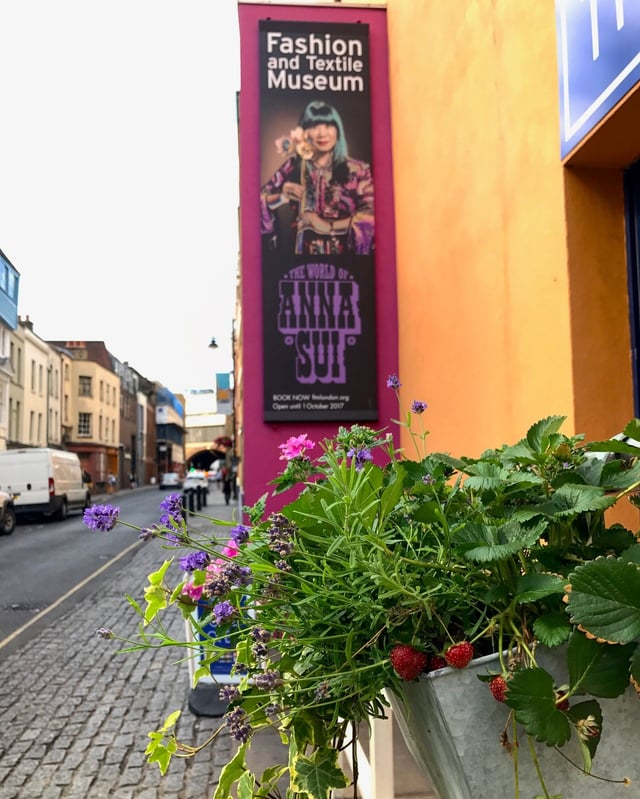 Having been born in Detroit, Michigan, Sui knew she would have to escape to a fashion hub to realize her dream of becoming a designer. So, upon high school graduation, she moved to New York City to attend Parsons The New School for Design. From there, she began her path to fashion fame. Today, she is well-known for her edgy and punk-inspired designs. The main museum room, full of mannequins garbed in her clothing, was stylized to look like one of her boutiques. One could clearly feel the rebellious attitude emanating from the combat boots, ripped jeans, and studded clothing. However, Sui is also known for her eclectic inspirations, drawing from a cornucopia of influences: everything from the Old West to her Chinese heritage. While exploring her works, the rooms are being fragranced by her perfume, creating an enchanting experience that melds the senses together.

Our most recent exhibit took us to The Victoria and Albert Museum, which currently has an exhibit on Cristobal Balenciaga, a designer who many herald as the king of haute-couture (clothing that is made from scratch for a specific customer). Balenciaga eschewed the small-waist and narrow-shoulders rule that had determined women’s fashion for centuries. He broadened the shoulders and removed the waist constraints, which would transform how women dress—the effects still seen to this day.

Photo: a look inside the Balenciaga exhibit at the Victoria & Albert Museum

The exhibit displayed an impressive range of Balenciaga’s work, especially considering much of the clothing is nearing a century old. The bottom floor began with his early years, when he was just beginning to gain prominence through his unparalleled tailoring prowess; and continued through his nearly fifty-year career: before our eyes we watched Balenciaga fling convention to the wind, allowing him to create without constraint. Many of his most iconic dresses and pieces are on display. The upper level contained more recent designs, such as the work Nicolas Ghesquière and Demna Gvasalia have done for the Balenciaga fashion house. It also included works from some of today’s most prolific designers, all who have taken inspiration from Balenciaga. Printed across the walls are quotes from some of the biggest names in fashion attesting to Balenciaga’s greatness.

As my time here in London comes to an end—it has absolutely flown by—I’m glad I was able to find time to visit all the exhibits I had on my list. And I didn’t even have to explore alone!