Exploring Space: The Streets of Boston

Coming from suburban America, where people drive from one place to another, walking for no particular reason was a bit of an eccentric thing to do. I could walk for hours in Paris …looking at the way the city was put together, glimpsing its unofficial history here and there, a bullet in the façade of an hotel particulier…or a row of cobblestones revealed by roadworks, several layers below the crust of the current city, slowly rising ever upward. I was on the lookout for residue, for texture, for accidents and encounters and unexpected openings. [1]

Lauren Elkin’s comment resonates with the experience of many American students when they study abroad. They learn modes of engagement with the environment that may be unfamiliar.  What Elkin calls being “on the lookout” precisely describes the habit of spatial consciousness that we try to inculcate in our students. 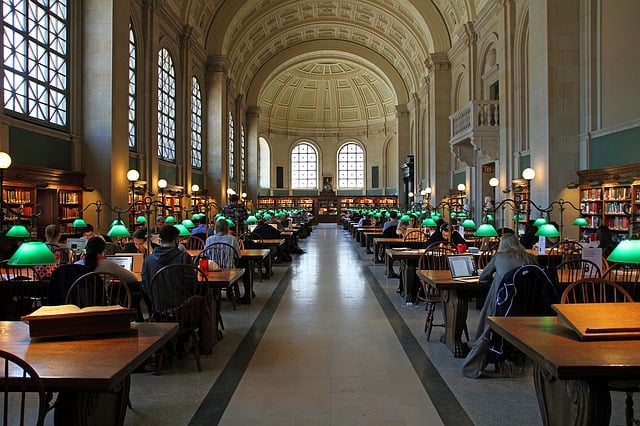 A student of urban environments is a kind of archaeologist or a reader of signs: deciphering that which might be missed by a tourist or incidental visitor. Interpreting visual signals requires us to go from merely seeing to active observation. Then, we need to translate those perceptions into language; to move from exploration to analysis -- to occupy rather than just pass through in a myopic blur.

This process is necessarily subjective. We tend to see what is important to us; we “edit” the environment by creating stories, connections and conjunctions. The environments in which most of us live and work are constructed (unlike untouched nature). Investigation of the implications of construction, intended and accidental, empowers us to experience, rather than just inhabit, the worlds through which we pass. Sensitivity to place is a gift of consciousness.

This was the state of mind in which I tried to engage with the city of Boston recently. I know it moderately well in so far as I am familiar with the route from hotel to office to a few amiable locations most suited to congenial recreation. I have not, until recently, tried to expand my personal map. In short, I have not approached this space with the consciousness that we try to bestow upon our students.

Boston is an excellent place in which to explore visual signs. It is connected to its history in ways that are not common in many American cities. It attracts visitors in search of those stories.

Signage reveals aspects of the city’s history that are sometimes hidden through development. By way of example, there is a fast food restaurant at the corner of Washington and School Street in the center of the city. A plaque tells us that building previously housed The Old Corner Bookstore: a place of profound significance in American literary history. In the mid-1800s it was the heart of American book publishing. From this location, publishers Ticknor and Fields produced the works of Henry Wadsworth Longfellow, Harriet Beecher Stowe, Nathaniel Hawthorne, Ralph Waldo Emerson, John Greenleaf Whittier, Oliver Wendell Holmes Sr., and Louisa May Alcott, many of whom were frequent visitors. It is relatively easy to unearth this history because the city itself recognizes the importance of the location.

Selective, pre-defined routes through the city are also offered to visitors. The most popular route values revolutionary America by creating a walking tour along what it defines as The Freedom Trail. The visitor is invited to: “Discover the rich history of the American Revolution, as it began in Boston, where every step tells a story.” [2] A Black History Trail similarly constructs a thematic route through the city. The city transmits histories that might otherwise be obscured. [3]

There are other narratives that an observer may discover through what Elkin calls “accidents and encounters and unexpected openings.”  My rambling along Commonwealth Avenue unearthed conjunctions that carry contrasting messages. Commonwealth Avenue is a space that invites inhabitants to linger. There are children’s play facilities, seating, space for joggers and dog walkers: It functions as a public amenity, a residential area with many fine private houses, and a route to or from the wider reaches of Boston Common.

There are also nine statues and memorials along the length of the Avenue. Like the Freedom Trail, the statues validate revolutionary history and military courage. That narrative is offered through the statues of Alexander Hamilton (1757-1804) and John Glover (1732-1797). The memorial to Patrick Andrew Collins (1844-1905) tells an archetypal American story of an Irish immigrant who became mayor of Boston.

These memorials enforce two recurrent narratives: a commitment to freedom exemplified by the struggle for independence, and the notion of America as the landscape of opportunity in which an American Dream may be realized – to rise from poverty to fame and fortune.

Other memorials, however, offer profoundly alternative perspectives to reveal what is often missing from conventional histories. 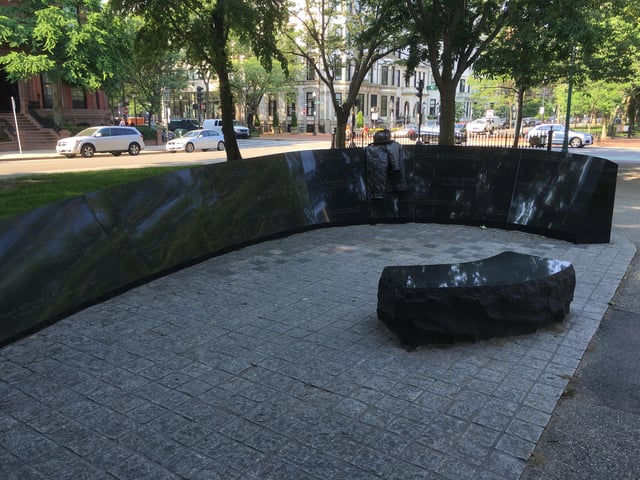 The Vendome Firefighters’ Memorial honors nine firefighters who died on June 17, 1972, in the Hotel Vendome fire. Inscriptions name those who lost their lives and offer a series of comments: “When that bell rings we are all the same. We are a team. We have one job to do. Our teamwork is everything; our life depends on every other firefighter.” These define a community bound by a sense of duty. Further inscriptions understate the nature of risk: “We are not heroes. We do what we love. We do our jobs. Our families know that each day could be our last. It's just part of the work.”

This memorial describes the commitment of ordinary men in extraordinary situations. The message offers an implicit commentary upon more conventional ideas of heroism.

Its significance is described by Kevin J. Mochen, a retired member of the Boston (MA) Fire Department:

The low sweeping black granite wall truly confers the atmosphere of the tragedy. When you are in the city, taking in a ball game, viewing the marathon, riding the swan boats with the kids, or just strolling, take a few minutes and visit this place of quiet remembrance, reflect, perhaps say a prayer, and recall that awful Father's Day weekend in '72. [4]

There are histories hidden from us unless we seek to unearth them.

The Boston Women’s Memorial (2003) addresses in concrete Sheila Rowbotham’s contention that the experiences and contributions of women are “hidden from history.” [5]

The three women represented, Abigail Adams, Lucy Stone and Phyllis Wheatley, are remarkable individuals and representative figures who expand our consciousness of what we need to value. They lived very diverse lives but are connected by a common moral thread: a commitment to social justice and equality.

As well as being the wife of the second president of the United States, Abigail Adams (1744-1818) was a determined spokesperson for women’s advancement. Her ideological commitment is expressed in a letter to her husband, March 31, 1776:

Remember all Men would be tyrants if they could. If particular care and attention is not paid to the Ladies we are determined to foment a Rebellion, and will not hold ourselves bound by any Laws in which we have no voice, or Representation.

Lucy Stone (1818-1893) shared Abagail Adams’s commitment to the struggle for women’s rights and suffrage.  She was recognized as a powerful orator, an uncompromising proponent of social justice and equality: "Let woman's sphere be bounded only by her capacity."[6] The principle of equal rights led her to found the Woman's National Loyal League during the Civil War:  an organization committed to the full emancipation and enfranchisement of African Americans.

Her story establishes a clear connection to the third figure represented:  Phillis Wheatley (1753-1784) was a slave brought from Africa to Boston where John Wheatley bought her, named her, and gave her to his wife as a gift. She became a significant literary figure. Her 1773 volume "Poems on Various Subjects, Religious and Moral" was the first book published by an African writer in America.

I, young in life, by seeming cruel fate
Was snatch'd from Afric's fancy'd happy seat:
What pangs excruciating must molest,
What sorrows labour in my parent's breast?
Such, such my case. And can I then but pray
Others may never feel tyrannic sway? [7]

She recognized that her life should inspire a belief in the principle and practice of social justice: "...in every human Breast, God has implanted a Principle, which we call Love of Freedom; it is impatient of Oppression, and pants for Deliverance ... the same Principle lives in us."[8]

The women’s memorial speaks to a number of political and ethical principles. It tells us that courage is not the sole province of military men and that alternative histories reveal lessons of resilience and resistance to oppression. That is a profound and inspirational message in stone in a public space for all of us to contemplate.

The streets of our cities are rich learning laboratories. Along Commonwealth Avenue a myopic focus on the lives of great men is balanced against the moral worth of the lives of ordinary men and extraordinary women.

It does not require any special talent to read the signs and symbols that surround us. We can all learn to interpret the city and gain, therefore, an awareness that there is not one version of truth or history. These explorations will take us to the library and what we read will take us back into the streets: a process in which integrated learning dissolves the walls of the classroom. The spaces in which we study are expanded and, in that broader landscape, the mind and the heart may also grow. We may learn that our past and, thus, our present is not limited, defined or constrained by narrow orthodoxies.